“A bullet flew in right here,” explains Nadyezhda Semyonovna, 65, to her local pastor, Yura, in the dining room of her home near Avdiivka, eastern Ukraine.

“I was wearing pants like this and it went through here,” she says, pointing to the front of her thigh where it sliced through the cloth. “But I wasn’t wounded. Bullets were flying; the dog was scared, but I wouldn’t let her out of my arms.”

Despite such near misses, Semyonovna, along with many other elderly people, continues to live a short distance away from the front line of a conflict, now entering its third winter. 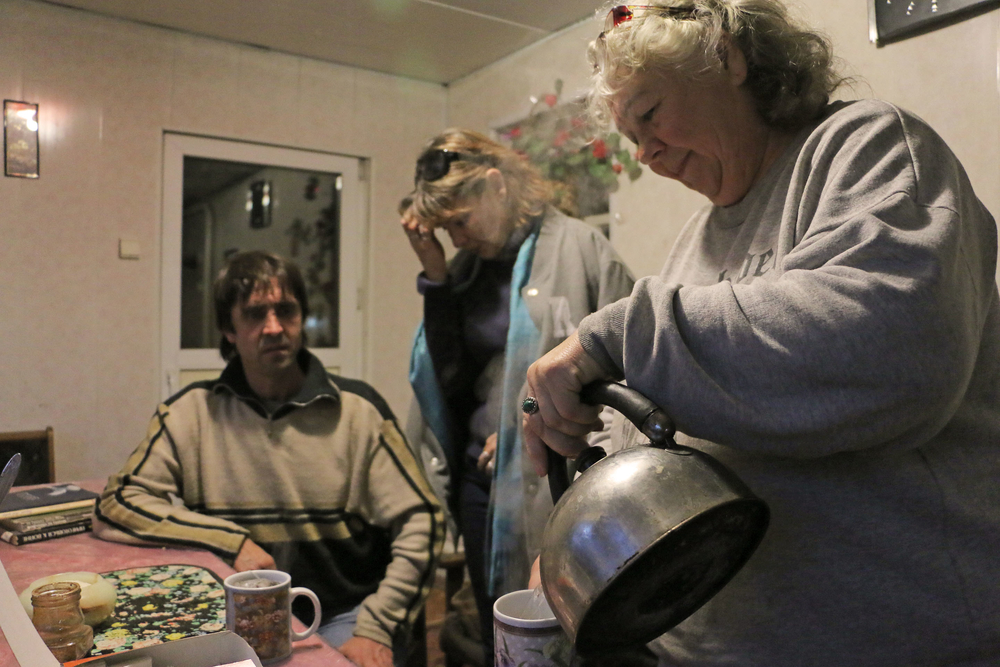 By September, the fighting between Ukrainian government forces and Russian-backed separatists had killed 9,574 people, including at least 2,000 civilians, according to the UN. Aid agencies – assisting 2.5 million people, including 800,000 still living close to the contact line – face increasing obstacles as they try to deliver aid to separatist-held areas.

Earlier this week, one of only two international aid agencies still operating in separatist areas, had its accreditation revoked by security officials from the self-declared Donetsk People’s Republic (DNR). Tens of thousands of beneficiaries, including many elderly people, stand to lose the assistance the organisation (which asked not to be named) was providing with food and house repairs just ahead of winter.

Across the region, elderly people who lack either the means or the will (or both) to abandon their homes, pets, friends, and communities, have been particularly hard hit by the war. Their experiences differ greatly, depending on whether they live on the government-controlled side, in the frontline area, or deep inside the isolated breakaway region.

Divided by the front line

Donetsk’s northern twin suburbs of Avdiivka and Yasinovataya lie just seven kilometres apart, but are divided by the front line, where artillery battles rumble nearly every night. Semyonovna would like to cross to see her family in separatist-held Yasinovataya, but has postponed the journey indefinitely due to security risks and lack of money.

“Everything, the cemetery, it was all mined,” she explains. “It’s impossible to cross that way. Before, I used to go with my bike to Yasinovataya. But when this all broke out, they closed the crossing.”

Transport between Avdiivka and Yasinovataya used to cost only about 10 UAH ($0.40) and take just 15 minutes. Now it requires crossing the front line and costs about 400 UAH ($16) for a five- to six-hour journey by shared car, or a slightly cheaper route involving several buses and a possible overnight wait. The result is that many people haven’t seen their loved ones living just a few miles away for more than two years.

See also: The struggle for survival on Ukraine's frontline

On the government-controlled side, retirees are eligible for a pension of about 1,250 UAH ($50) per month, while disability grants are an additional 600 UAH per month ($24). Until a few months ago though, elderly people made homeless by the war or living on the separatist-controlled side could only collect government pensions if they could register proof of residence on government territory.

Although the separatist authorities began to absorb responsibility for paying pensions in the summer of 2015, the total amount in Russian rubles was equivalent to only about 800 UAH ($32) per month.

The Ukrainian government, the UN, and aid agencies debated how to urgently fill this gap and in October the registration rule was eased. More pensions are now being paid out, but are still extremely low in purchasing power.

Humanitarian agencies, which for some time had disqualified those receiving pensions from also receiving aid, have also started assisting pensioners with food and hygiene kits, adult diapers, cash grants and special winter support.

One Sunday in Avdiivka, Semyonovna and others joined Pastor Yura and his lay leader Sasha, at the Frontline Mission, a local Protestant community group in a former second-hand clothing shop downtown.

Yura started to tell a story about how his wife had caught a large fish in the nearby lake. Suddenly, there was an explosion nearby. Some heads turned; others shuddered. “Don’t worry,” said Yura, “probably a mine.” He continued his story, delivering a punchline that got a laugh. 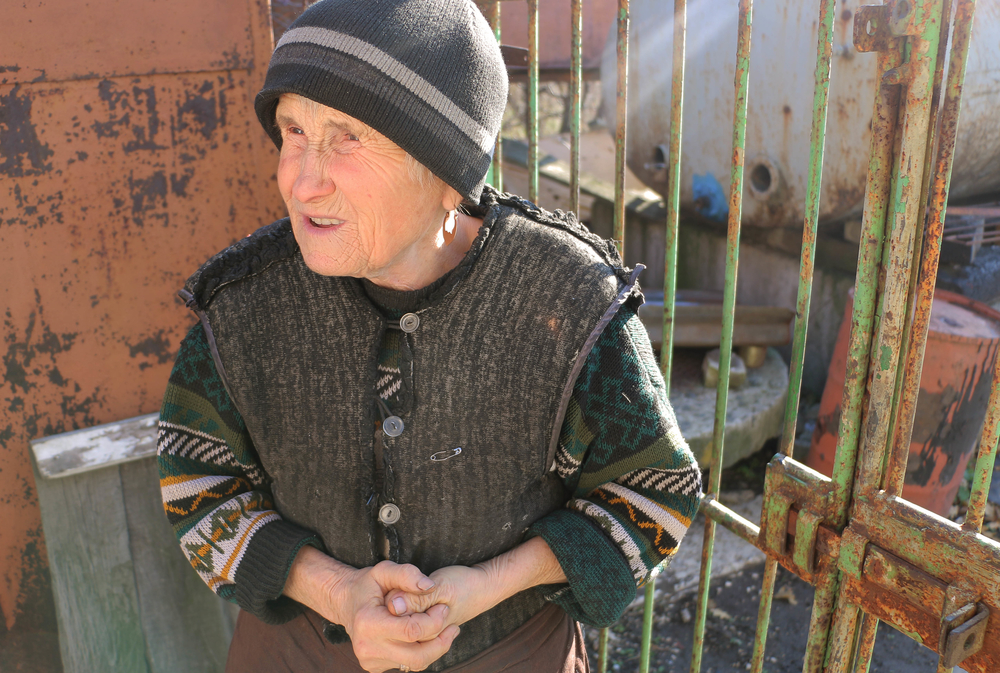 After two years of shelling, people mostly ignore the booms, but this one sounded close. As the service ended with a prayer session, the elderly members of the congregation were the first to come to the front and ask for additional prayers. The service finished with hugs, and more than a few tears.

Yura and Sasha, who also work with PIN on house repairs, drove out of downtown Avdiivka southeast toward Semyonovna’s home. They crossed the train tracks that go towards Yasinovataya and onto a road that descends through the Prom industrial zone, where some of the fiercest fighting of the war has taken place. Just before the turn off to the frontline itself, they met Ludmila Vasilevna, a woman in her mid-60s, whose shrapnel-damaged house they’d helped rebuild.

She paced around her yard showing them how her family had finished repairing the damage. “Shrapnel, you can see, cut all through the water tank and everything…. You can see over there where another landed and blew up everything, putting holes in another water tank…. We would sit in the basement during all this bombing.”

Vasilevna had been collecting ordnance from around the house and yard like windfall fruit after a storm. She displayed six heavy-calibre bullets, 20 pieces of mortar shrapnel, and a 10-centimetre-long shard from a heavy artillery shell. Despite the ongoing risks of shelling, Vasilevna refuses to leave. This is her home, she said, and she has nothing else. 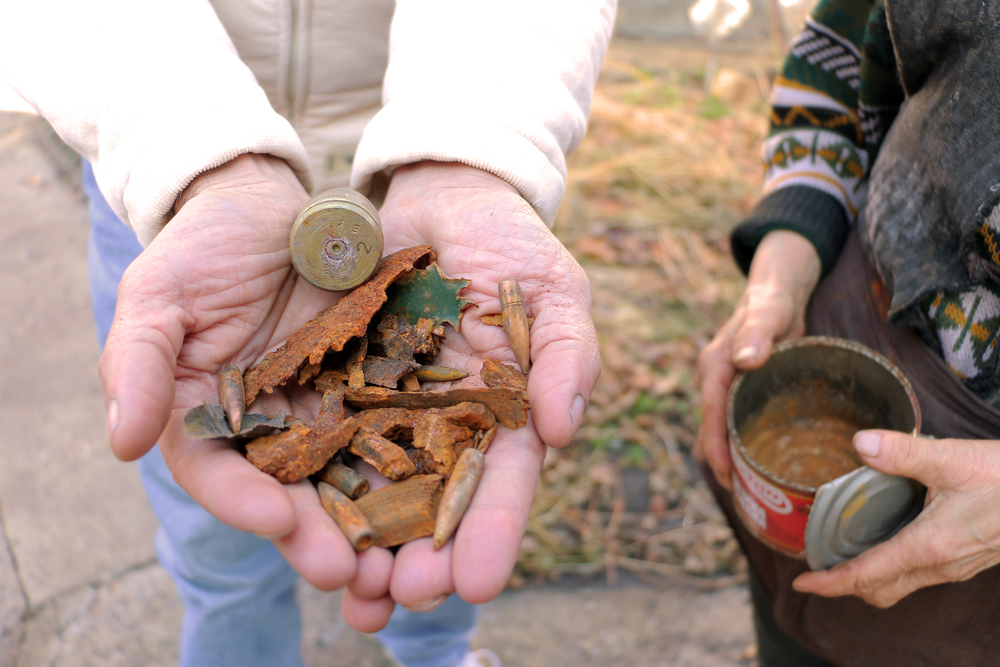 Despite the ongoing risk of shelling and lack of money, Semyonovna, Vasilevna, and their neighbours, still have their health and a roof over their heads. Others are even less fortunate. Isolated from family even before the war, bed-ridden or senile, some elderly people were simply forgotten when fighting began. Local church groups going door-to-door sometimes find them too late.

“We see the majority of elderly and disabled people in contact line areas living alone,” said an aid agency worker who asked not to be named. “Their caregivers, usually their children, left for somewhere else to find employment opportunities.”

Yura and Sasha’s next stop was Avdiivka’s recently re-opened Home for the Elderly.

Sergei Sarok, 64, explained how he came to be there.

“I was in the kitchen. I wanted to cut a slice of bread with sausage and make a sandwich and there was an explosion in the neighbouring apartment and glass went all over the kitchen. I ran to look and the biggest piece of glass was stuck in me. I went out in the hallway and there was nothing left [next door].” 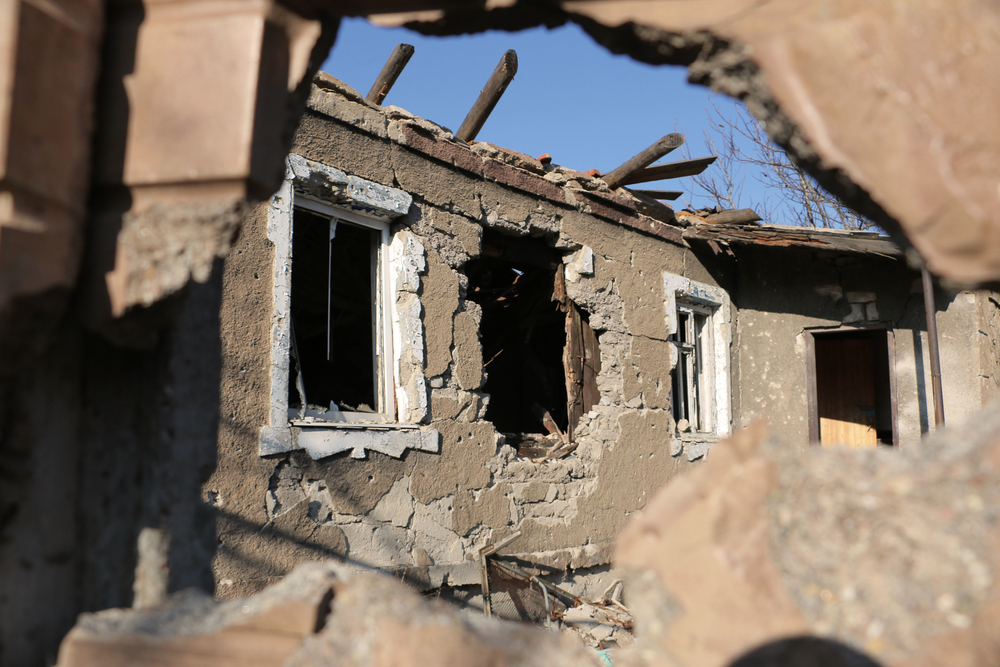 Sarok said he stayed with an acquaintance for a year and then at a sanitarium before returning to Avdiivka. He survives on occasional aid assistance and a disability grant that is just enough to buy potatoes, vegetables, and soap. For anything else he needs, he must beg or borrow.

Although Semyonovna has not been able to go to Yasinovataya, on the rebel-held side, Yura travelled there recently with the Frontline Mission to assess conditions.

“Life is difficult over there,” he said. “Many people from there came here [to Avdiivka] early on.” He added that some had since returned because they missed their homes, neighbours, and communities.

Throughout the war, both Avdiivka and Yasinovataya have suffered heavy shelling, but while Avdiivka is open to the north and can be restocked with food, hygiene, and other goods from central Ukraine, Yasinovataya is tucked into a corner of the self-declared Donetsk People’s Republic, behind numerous military checkpoints.

Aid agencies repair roofs and do food and hygiene kit distributions regularly in Avdiivka, but must overcome complex logistics and delays to cross the frontline and deliver aid in Yasinovataya and elsewhere in Donetsk.

Last year, during the heaviest fighting, aid convoys were often only able to deliver supplies every two months. Russian humanitarian aid providers coming from the other side attempted to fill the gaps, setting up a distribution point right next to the international aid point in downtown Donetsk.

For the elderly in separatist-controlled areas, the coming winter will be particularly tough. Night-time temperatures can drop to -10 degrees Celsius or even lower while gas, electricity, and water are often cut for long periods. Some people have wood stoves, but firewood isn’t always available.

The aid agency worker told IRIN that elderly people have urgent needs, particularly for hygiene items. “There are negative coping mechanisms when elderly people must save their income, buy cheaper food, save on the cost of clothing and hygiene items, [to] buy medicines.

“The situation is the same on both sides of the contact line, but is more problematic on the non-government side since there are only a few organisations left there to support these people.”

The International Committee of the Red Cross is now the only international aid agency accredited to work inside the DNR, where authorities are rumoured to want to increase cooperation with local NGOs.

With access so limited, organisations including HelpAge International and the UN have had to focus their efforts on advocating for the elderly with the government and donors, and working with local groups to find those who may have fallen through the gaps.

At Semyonovna’s house near Avdiivka’s frontline, her dog circles Yura, Sasha, and other friends, as she pours tea. She says she has lost faith that the international community or the government can solve her hardships. “I think only God will help us now.”

(TOP PHOTO: Olga Ivanovna plays her mandolin in the hope of earning a few coins towards the re-building of her home in Slaviansk, eastern Ukraine. Daniel Gerstle/IRIN)