Read about what we achieved.
BENI

People in the eastern Congolese city of Beni have had enough of massacres. Angered by the inability of the army to protect them against shadowy armed groups, some are secretly forming their own self-defence units.

But it’s a decision that can’t be taken lightly. The last thing the Democratic Republic of Congo needs is more militias, and there are voices in the community urging caution.

“The young have understood that they cannot fold their arms when faced with the killers that the state and its partners no longer know how to stop,” said Jean-Paul Ngahangondi, national coordinator of the Beni-based Convention for the Respect of Human Rights.

But “there is a danger,” he said. “The risk is using any means necessary, [leading to the creation of more] armed groups.”

People in Beni are still reeling from the latest attack on 13 August, when unknown men raided the Rwangoma suburb of the city and used machetes to kill more than 50 people, including women and children.

The Kyaghanda Yira cultural association (Yira is the majority ethnic group in North Kivu Province) said the attack, the deadliest to date, brings to more than 1,500 the number of civilians killed since October 2014.

“The genocide will only continue. Innocent civilians are being executed while the Congolese government fails to come up with any retaliatory or preventative measures,” said Jules Vahikehya, secretary general of Kyaghanda Yira.

"The international community must recognise the Beni massacres as a genocide, with a view to taking the necessary measures to avoid the situation escalating like it did in Rwanda"

In an open letter to President Joseph Kabila, a coalition of civil society groups listed the humanitarian toll of the violence. Aside from the deaths, it includes “more than 1,470 people missing, more than 1,750 huts burnt down, semi-deserted villages, and schools and health clinics destroyed”.

The displaced include people like Masika Kaghoma. Her family moved to Eringeti, outside Beni, to escape the violence. But running short of food, her husband and eldest son took the risk to return to their fields.

“Half-way, they met the cut-throats who decapitated them with machetes. Having learnt of this new atrocity, I took my four other children and walked with them to Beni town centre,” she told IRIN.

Three months on, she now lives in nearby Butembo, surviving through scavenging in the market. “Me and my children do the rounds at the supply depots,” she said. “If there’s a banana that falls during unloading, I grab it. This is how life is for us these days.”

The government blames the violence on the Allied Democratic Forces, an Islamist rebel group with links to Uganda. But critics say it’s not that simple. Behind the narrative of an Islamist menace, there is evidence of Congolese military involvement, with potential links to smuggling rackets.

In May, the Congolese army and the UN’s Force Intervention Brigade launched a new operation to destroy what was billed as the last remaining pockets of ADF.

But the ability of the killers to still penetrate Beni, getting past military checkpoints, leaves people shaking their heads.

“More than 18 months after the beginning of the massacres, the Congolese army deployed on the ground, with several thousand heavily armed soldiers, hasn’t been able to identify to the population the true identity of the killers and adapt its operating model accordingly,” said Vahikehya, of Kyaghanda Yira.

Julien Paluku, governor of North-Kivu, is more upbeat. “The last operations by our armed forces, at the end of July and the beginning of August, succeeded in destroying the enemy bases in Nadui and Mwalika, which were allowing these terrorists to be very mobile around the peripheries of Beni,” he said.

It's not only the Congolese army that’s being criticised for its performance. The UN’s peacekeeping and stabilisation mission in Congo, MONUSCO, is also heavily condemned.

“We no longer understand the attitude of the international community, these great powers, these powerful international organisations,” said Mbindule Mitono, national minister for North-Kivu and key member of the Union for the Congolese Nation, the second largest opposition party.

“We are in the process of counting thousands of dead, but they [the UN] still don’t take any action, as they are doing elsewhere, for example in Mali, in Libya, in Syria, where they are engaged against terrorism.”

The Congolese National Armed Forces (FARDC) reinforce their positions around Goma following a second day (21 May 2013) of fighting against M23 elements in the town of Mutaho, about 10 km from Goma 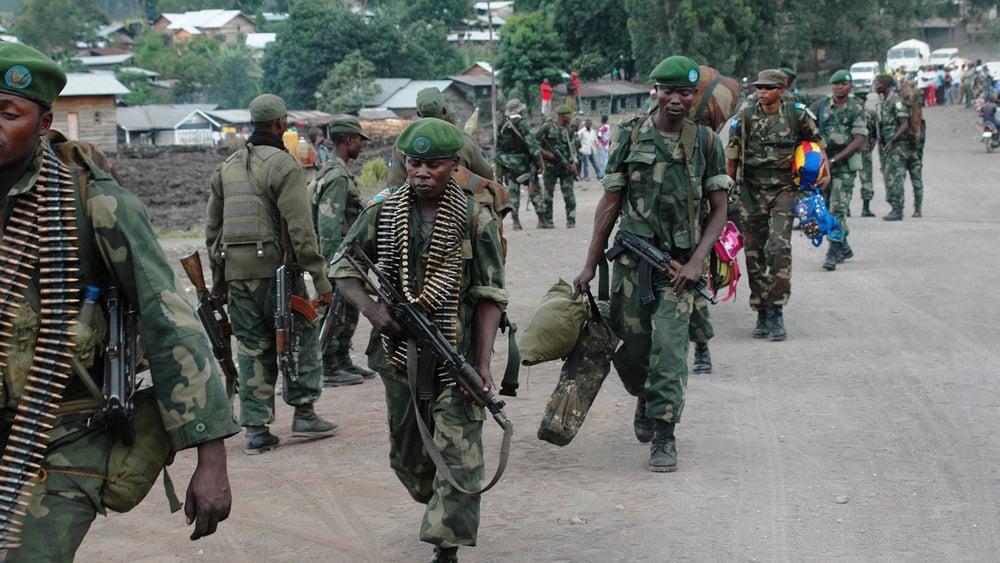 MONUSCO/Clara Padovan
The army has failed to protect

On 17 August, at the end of three days of national mourning declared by the government in memory of the victims of the Rwangoma massacre, student groups in Beni issued a three-day ultimatum to MONUSCO to leave the country.

“MONUSCO has proved its uselessness and its negligence in protecting civilians,” declared Riginal Masinda, spokesman for the Beni students.

“The international community must recognise the Beni massacres as a genocide, with a view to taking the necessary measures to avoid the situation escalating like it did in Rwanda,” said Franck Mukenzi, a local youth council leader in North-Kivu.

Rather than UN peacekeepers, he called for an Operation Artemis-style intervention, a European Union-led mission in 2003 to quell violence by ethnic militias fighting in northeastern Ituri Province.

Feeling angry and abandoned, the idea of the community taking care of their own defence is gaining currency in Beni, and groups are beginning to emerge.

Some are unarmed, with the goal of merely tracking the insurgents. But at least one, called Mazembe, has been launched with the aim of fighting back, a law student at the Catholic University of Graben in Butembo told IRIN.

He said he had been approached to join, and the recruiter’s argument was that the scale of the massacres in North-Kivu meant it was now time for a “popular force” to defend the community.

“He told me to tell my friends about it,” said the student, who asked not to be named. “He is waiting for our decision to organise an awareness-making meeting and some tattooing that will make us invincible to bullets.”

“Today, the young people of Beni want to guarantee their own protection,” said Jackson Sivulyamwenge, a journalist from the Catholic radio station, Moto d’Oicha. “But they are hesitant to come out openly, for fear of reprisals by the security services, which might see them as creating militias.”

For some, the idea of creating more armed groups recalls the dark days in eastern Congo, when a multiplicity of ethnic-based so-called defence units preyed on the population.

According to Nicaise Kibel Bel’Oka, who heads the Centre for Geopolitical Study and Research in Eastern Congo, “to train young people in the logic of these self-defence groups is to want to plunge the region into a new crisis.”

For Ngahangondi, of the Beni-based Convention for the Respect of Human Rights, the government has to be able to find a way to reassure people that it’s on top of the problem, before young men start arming themselves.

“If not, we risk returning again to the hellish cycle of self-defence militias,” he warned.