Once Syria’s most populous city, Aleppo is now a humanitarian disaster zone. As fighting intensifies in several districts and bombs again rain down from the sky, tens of thousands of Syria’s forgotten civilians try to survive on the frontlines, dodging missiles and hiding from snipers.

Their lives have become increasingly difficult in the past 48 hours as the fragile ceasefire of past weeks has evaporated in all but name. Médecins Sans Frontières says a hospital it supports was hit on Wednesday, with at least 14 patients and two doctors killed. Dozens more people were reportedly killed in the city on Thursday in attacks from both pro-government and various opposition forces. UN mediator Staffan de Mistura says the two-months-old cessation of hostilities is "alive but barely."

“Wherever you are, you hear explosions of mortars, shelling and planes flying over,” Valter Gros, head of the International Committee of the Red Cross’s Aleppo office said in a statement Thursday. “There is no neighbourhood of the city that hasn’t been hit. People are living on the edge. Everyone here fears for their lives and nobody knows what is coming next.”

Before the recent uptick in violence, IRIN visited a part of the city controlled by forces loyal to President Bashar al-Assad and found thousands already facing aid shortages and lacking the financial resources to leave. We were unable to access opposition-controlled areas, which are routinely bombed and where the situation is even worse.

In the residential district of Salaheddine, some two kilometres from where MSF says the hospital was struck, streets were barricaded with piles of rubble topped with decrepit abandoned vehicles. Tarpaulins from UNHCR, the UN’s agency for refugees, were strung across streets to protect civilians from the sights of snipers.

A soldier from the Syrian army stationed in the district (around 50 percent of which is under government control) said that some 70,000 people, mostly displaced families from other areas of Aleppo, were living in the district, some just metres away from rebel-held areas.

Even collecting aid provided by the World Food Programme and the Syrian Arab Red Crescent was fraught with danger.

“The aid distribution point is on the frontline and we have to queue for three hours to get the boxes,” 32-year-old Bushar Tahar told IRIN.

“Two months ago one man was shot dead in the queue by a sniper while we were waiting,” she said. “The terrorists know when people are queueing to get aid, so they target the crowd.”

Tahar complained that the meagre supplies – which arrived already missing some of the most highly valued comestibles, such as preserves – were insufficient for her family’s needs.

“I have forgotten the taste of so many things, like eggs and cheese,” she added.

Tahar’s husband lost his job when the milk factory where he worked was destroyed, leaving the family completely reliant on aid. The paltry diet has left her unable to breastfeed their two-month-old daughter, who was born in the sparsely furnished apartment she has called home for a year now.

“Salaheddine is in a very bad situation and is very dangerous because of snipers and random missiles,” Tahar explained. “Yesterday, on this very street, a boy was killed by a gas-bottle [an improvised explosive fired from a mortar], in the middle of the afternoon. Sometimes, I am so frightened for my son that I don’t even let him go to school.”

Like many of Syria’s estimated six and a half million internally displaced people, those still living on the frontlines in Aleppo are mostly too poor to leave, and live in the carcasses of apartment blocks.

“It was a very hard winter here, with no doors and no windows,” said 70-year-old Suad Tabakh. “We collected rubbish from the street and burned it on open fires to try and heat the room.”

Tabakh said the onset of spring had brought respite from the cold but mourned the loss of her home, in a part of Salaheddine under opposition control. 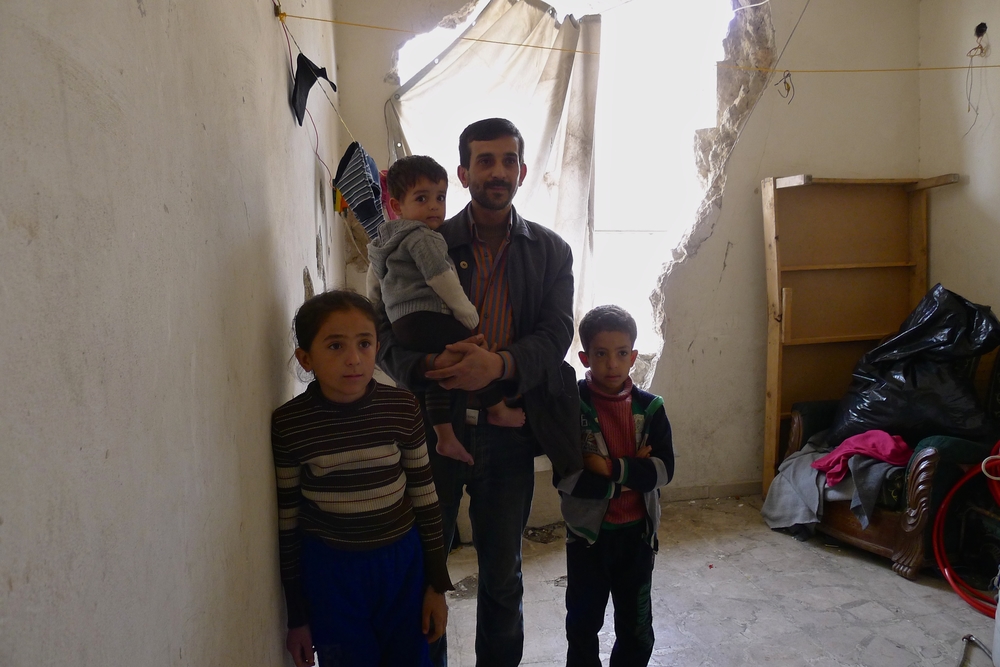 In a top-floor apartment metres from a frontline, 40-year-old Haithem al-Hajjbahar has constructed a makeshift water tank from UNHCR sheeting.

It looks like a paddling pool, is uncovered, and takes hours to fill, with water pumped up from the street below. It sounds rudimentary but his family are delighted with the new arrangement. “All my kids had stomach problems when we had no water before, because we had to rely on polluted supplies,” he explained.

Hajjbahar’s nine-person family has lived in the three-roomed apartment for four years, ever since his home in another area of Salaheddine was targeted by opposition forces. “I was threatened at the start of the rebellion because I was employed by the government,” he said. “They stole all the furniture so we had to flee, and I was told later that they destroyed most of the house and just one room remained.”

Hajjbahar manages to still get to work, via a series of minibuses, after navigating the sniper-laced streets adjacent to his home. “The area is fairly safe when you know it, but the snipers change their positions so we have to move around very carefully,” he explained.

Residents of this part of Salaheddine, a government stronghold that has escaped the very worst of the carnage in Aleppo, are attempting to adapt to the difficult circumstances. Above large posters of al-Assad, a complex network of cables runs across the streets. These deliver amperes of electricity from diesel generators run by local cafés and shops to illuminate households that have been without electricity for years.

For 750 Syrian pounds ($3.40), a family can buy one ampere, which provides 10 hours of electric light and TV per day, for one week, explained 35-year-old Taher Khawajeeya, one of many IDPs who have found small ways to scrape a living on the edge of the conflict. 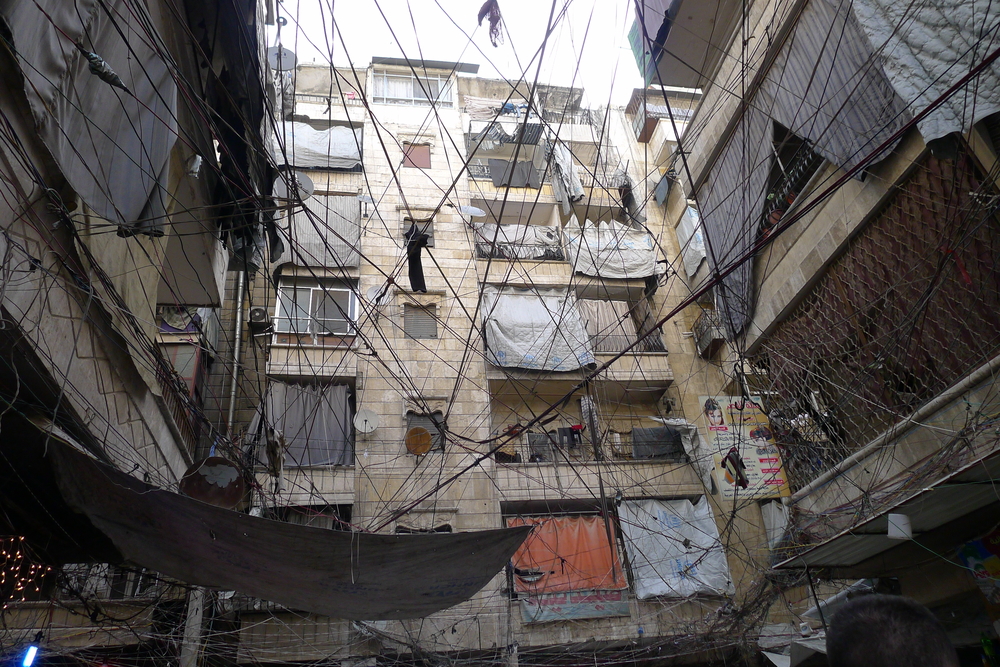 Mechanic Waleed Juma, 33, salvaged tools from his workshop – since destroyed – and started a business fixing the generators upon which Salaheddine residents now rely so heavily. He has young apprentices aged 12 and 14 – just two of the many children Syria’s conflict has forced into premature adulthood.

Another 14-year-old, Mohamed, has been working in a textile factory since his father and older brother were killed in the conflict. “I am working to get money for my family,” he said with pride, standing as tall as he could. “My ambition is to volunteer in the Syrian Army and defend my country.”

In another street, a boy sat on a step outside a UNICEF clinic, crying.