When her water broke one afternoon in mid-February, 19-year old Yanny Trejo didn’t rush. Instead, she stayed in her sweltering shack on a hill overlooking Caracas until she knew she was about to give birth. Then she climbed the steep stairs out of the slum and made the 30-minute trip to hospital.

Trejo was fortunate that friends who had recently given birth had advised her not to go too early.

“You have to arrive when your baby is just about to crown,” she told IRIN. “If not, they will send you away to another hospital, then that hospital will send you to another, and it just keeps going.”

At the state-run Concepción Palacios Maternity Hospital, where Trejo’s baby girl Arantza was delivered, doctors admit they are working with limited resources and frequently have to turn away women in labour.

“The reality is that we only have the capacity to accept patients in the moment when they are about to deliver,” one doctor, Moraima Hernández, told IRIN. “Patients have to play roulette with various hospitals to receive medical attention.”

Venezuela’s economy, already struggling with runaway inflation resulting from fiscal policies implemented by its socialist government, went into a tailspin last year when oil prices crashed. ­The government relies on oil exports for 95 percent of its revenue, including funding for state hospitals. A lack of resources is now crippling the public healthcare system, leaving pregnant women and young children especially vulnerable.

At Concepción Palacios, the largest state maternity hospital in the country, doctors face shortages of antibiotics, surgical equipment, chemicals to process blood tests, latex gloves, and even running water and cleaning supplies to sanitise operating rooms. Last year, 748 infants (nearly eight percent of all babies born at the hospital) contracted infections caused by poor hospital hygiene. And, in the first three months of 2016, dozens of women developed infections after having caesarean operations at the hospital. Infections are so prevalent that “doctors are afraid to operate,” said Gladys Zambrano, an epidemiologist in charge of tracking the infections.

At the national level, infant mortality rates rose to two percent last year, from 0.05 percent in 2014, according to the Health Ministry’s annual report. 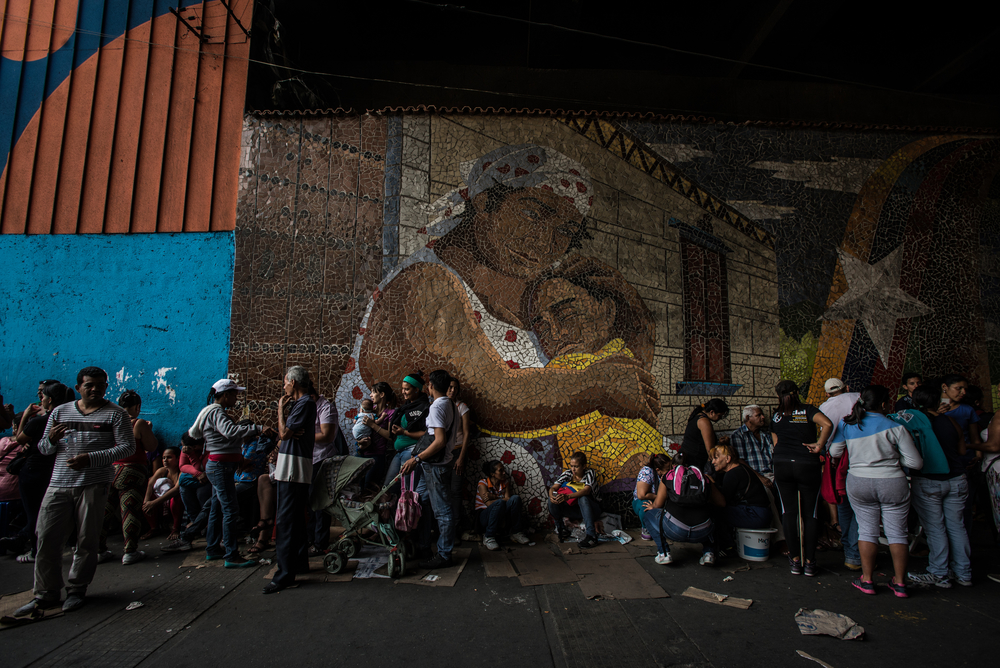 Not far away from the hospital, hundreds of people queue outside a supermarket rumoured to have received a shipment of corn flour and butter. Armed soldiers stand guard over the growing line that stretches for several blocks.

Layiy Campos, 23, arrived at 8pm the night before and slept on the pavement despite being six-months pregnant. Sixteen hours later, she looks exhausted. “When I’m out waiting in the lines, it’s really uncomfortable. My feet hurt, my back hurts, everything hurts,” she said softly. “My baby was kicking all night. I can tell that he gets uncomfortable during all the waiting too.”

Hyperinflation has caused price-controlled goods such as rice, chicken and cooking oil to disappear from shelves, and prices of other goods to soar. Working class salaries have less purchasing power every day. The International Monetary Fund predicts that inflation in Venezuela will peak at 720 percent in 2016, meaning that the situation is likely to get much worse before it gets better.

Campos said her pregnancy wasn’t planned. She used to take birth control pills that were distributed for free by a state-sponsored “Barrio Adentro” clinic in her neighbourhood. Eight months ago, the clinic ran out of the pills. Two months later, Campos was pregnant. “I’m afraid of how things will be once I give birth,” she told IRIN. “It’s going to be very hard to find milk and diapers.”

Oriana Ramirez, 19, and her husband John Contreras, 24, already know how difficult it is to find diapers. A few metres behind Campos in the supermarket line, the couple push their four-month-old daughter, Maygel, in a pram. As they near the entrance to the store, Contreras carefully unfolds his daughter’s documentation to show the shop’s employees. “We have to carry her birth certificate everywhere we go, so that we can buy diapers,” he explained.

Some shops have implemented such measures in an effort to make sure diapers sold at government regulated prices go to families who really need them, instead of to ‘bachaqueros’ – hustlers who buy hard-to-find, price-controlled goods and re-sell them on the black market at exponentially higher prices. 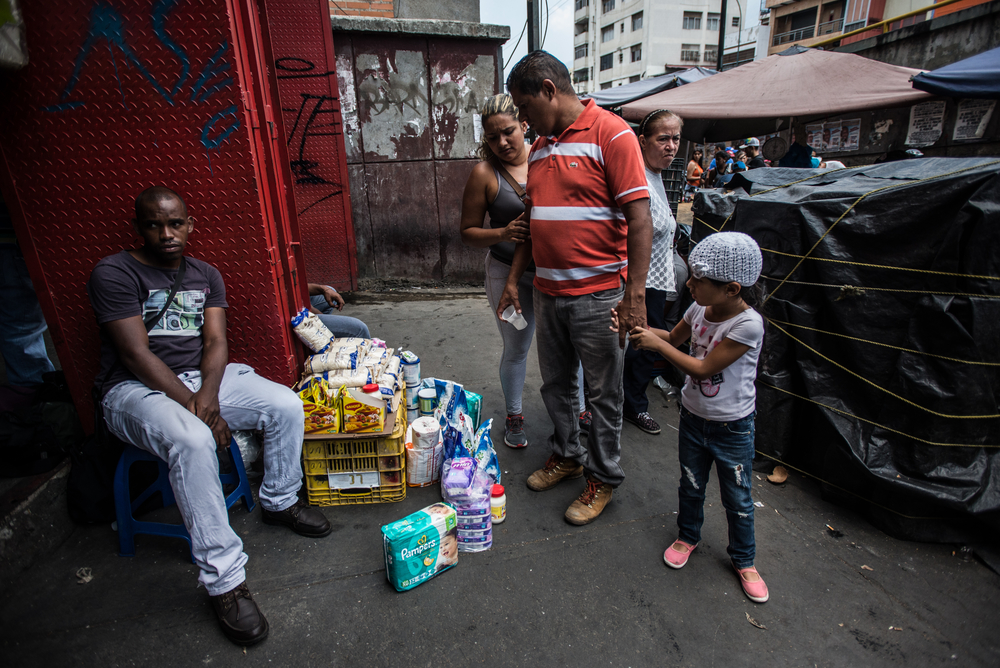 The minimum wage salary Yanny Trejo’s partner makes as a government contractor is barely enough to feed the couple as well as Yanny’s three-year-old daughter and their newborn. Trejo began researching herbal medicine out of frustration that she could rarely find what doctors were prescribing for her children in local pharmacies. Now she grows medicinal plants in the garden outside her shack and says she has used them to treat her daughter’s chikungunya, scabies, colds and respiratory infections. “It’s like raising children 50 years ago, with homemade medicines and remedies,” she said. 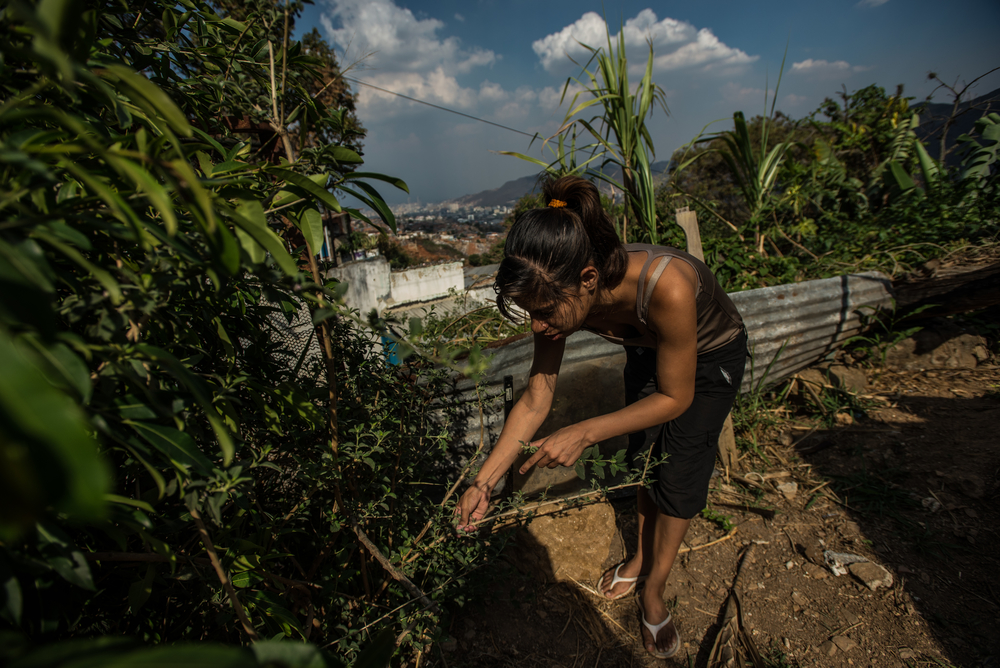 As if the economic crisis and crumbling health system weren’t enough to contend with, pregnant women in Venezuela now also have the Zika virus to worry about. The virus, which has spread throughout South America in recent months, has been strongly linked with an increase in cases of babies being born with microcephaly, a neurological condition that affects an infant’s head and brain development. 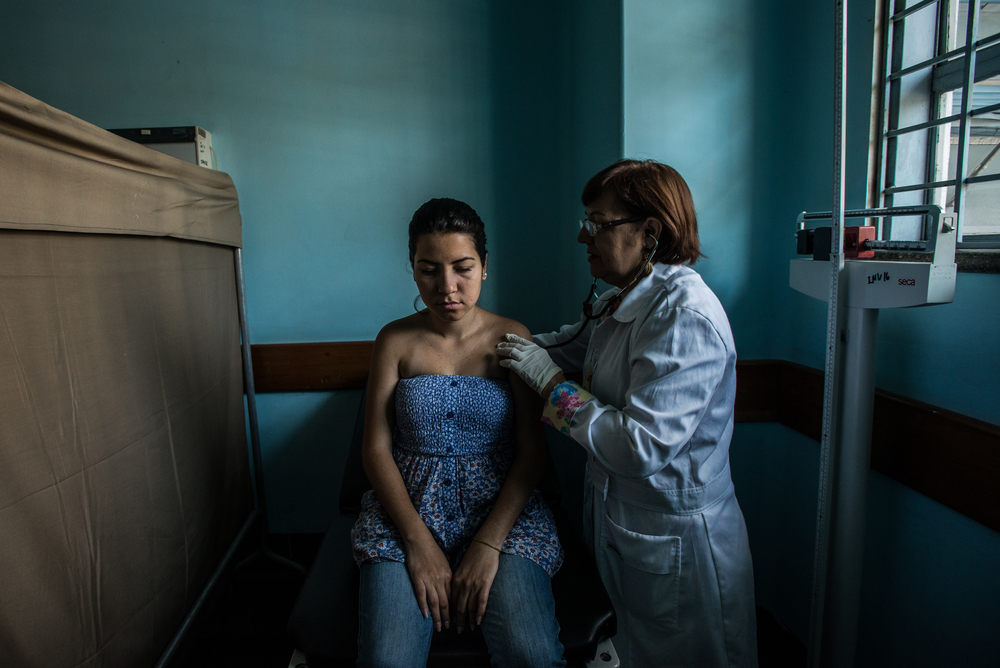 At University Hospital in Caracas, Karla Castillo, 25 years old and 11 weeks pregnant, fidgets nervously during a check-up with infectious diseases specialist Ana Carvajal. Castillo was recently diagnosed with Zika virus and wants to know what the probability is that her baby will be born with microcephaly.

Carvajal could only tell her that the chances are still unknown, but that she and other researchers are working on figuring out the probability.

Unlike in neighboring countries like Brazil and Colombia, the Venezuelan government has been reluctant to publish statistics about the extent of Zika infections in the country. The only official numbers supplied by the Venezuelan Ministry of Health in a 9 March report to the Pan American Health Organization, recorded a total of 16,942 suspected Zika cases. But the "Defendamos la Epidemiología Nacional" – an independent network of doctors that compiles and publishes its own, unofficial epidemiology reports – estimates the number of suspected cases to be between 400,000 and 500,000. The Ministry of Health had not responded to IRIN’s interview requests at the time of publication.

So far, there have been no official reports of babies born with microcephaly. However, doctors believe this is because the Zika virus only arrived in Venezuela at the end of last year. The economic crisis means there is no capacity to do the laboratory tests necessary to confirm all suspected Zika cases, but doctors have identified women carrying foetuses that have microcephaly.

Carvajal is currently monitoring 50 pregnant patients with Zika symptoms. She estimates that between 2,000 and 4,000 babies will be born with microcephaly in Venezuela this year, and she fears that the country’s hospitals are not prepared to give them the care they will need.

“We are worried because our country is in a crisis,” she told IRIN. “How will our country take care of 2,000 children with microcephaly? That is the responsibility of the government, of the healthcare system – it is a social and financial responsibility. If a mum needs a paediatrician, a neurologist, and a psychologist – that is an entire team – and the truth is, we are not prepared for that.”

Trejo said she doesn't regret having her daughter, "but it makes me sad, indignant even - that I had her at this moment, when children have to struggle so much, have bad days, and endure hunger."