Memuna* was four months pregnant when Boko Haram attacked her village on the outskirts of Bama, some 60 kilometres southeast of the Borno State capital of Maiduguri.

Her husband was killed during the September 2014 raid. She was captured and thrown into a cage by the militants after becoming separated from her five children.

They released her after discovering she was pregnant and Memuna, 35, was eventually reunited with three of her children in a camp for internally displaced persons (IDPs) at the Government Girls’ College in Maiduguri. She does not know if her oldest two sons are still alive.

Life in the camp hasn’t been easy but at least they’re safe.

Soon, however, Memuna and the 4,500 other women and children she shares former classrooms with may be forced to return to the very place they fled from.

Mamuna was held captive by Boko Haram in Bama for several weeks. She managed to escape and she now l 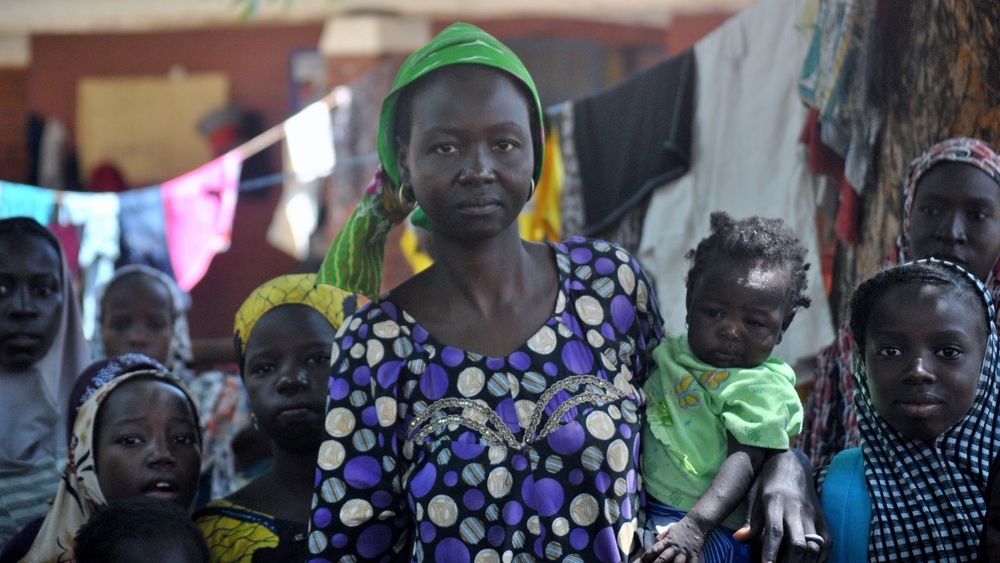 The Nigerian government has announced plans to start closing IDP camps by the end of December in Adamawa State, and, in January, in Borno State. A campaign led by the government’s National Emergency Management Agency is urging all IDPs to do go voluntarily before they are forced.

“With the increased pace of rebuilding all destroyed communities by the state’s Ministry of Reconstruction, Rehabilitation and Resettlement, all the displaced people are expected to return to their homes in the next six months,” said Borno State Governor Kashim Shettima.

Is it too early?

Victor Lahai, head of Borno operations for the UN emergency aid coordination body OCHA, told IRIN it is only sustainable for IDPs to return to their homes if the security situation has improved sufficiently, and if the communities they are returning to have the infrastructure and means to absorb them again.

“If those conditions are not met, there will be another secondary displacement, thereby causing more humanitarian [need] in the state,” he said.

Since the escalation of the conflict in 2009, more than two million people have been displaced in northeastern Nigeria. 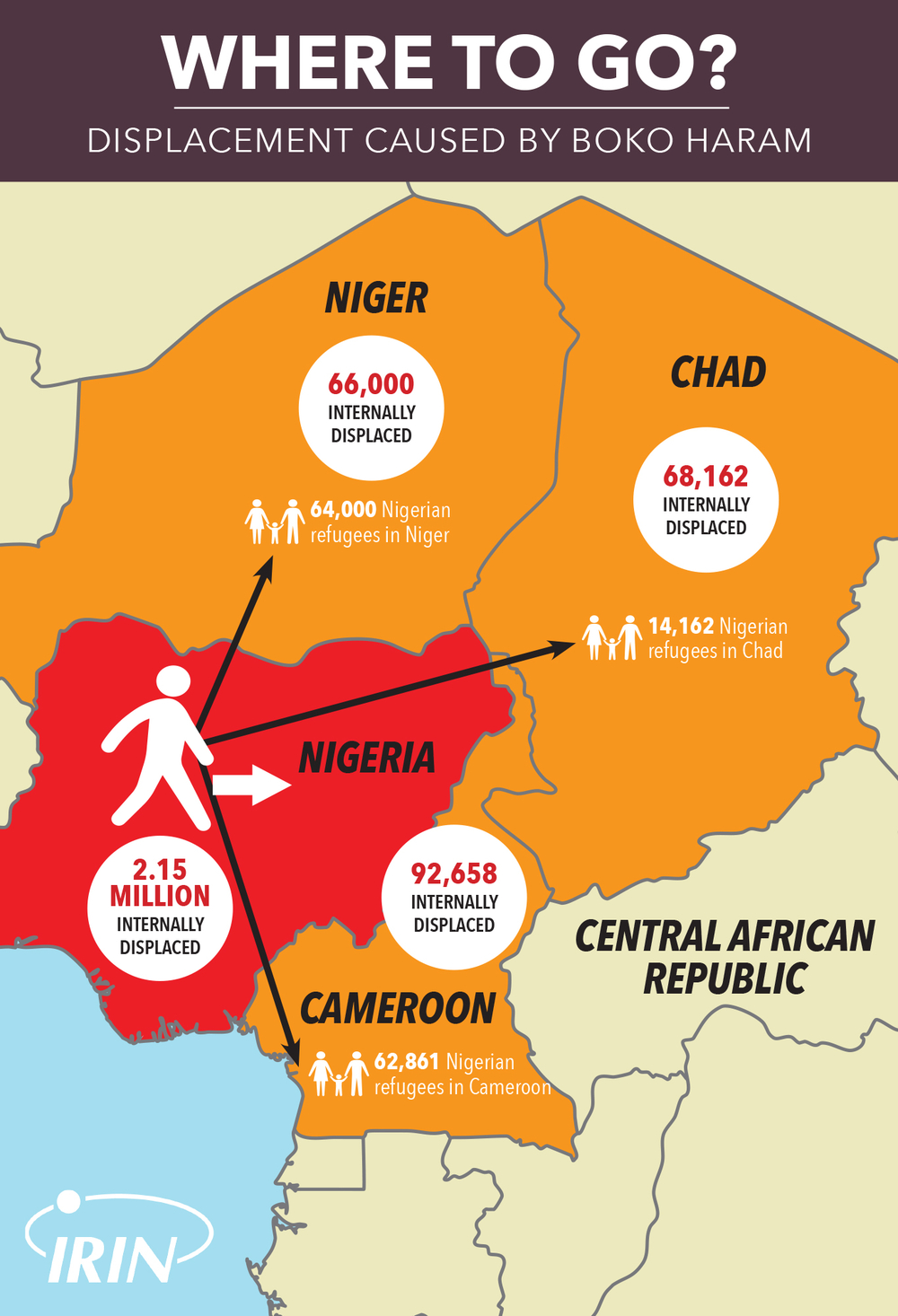 While fewer than 10 percent are estimated to be living in camps, with the rest staying in host communities, nearly 200,000 people could soon be forced to take refugee elsewhere if the government goes ahead and closes the 23 IDP camps scattered across Adamawa, Borno and a third state, Yobe.

See: Lost in the city

According to the Nigerian authorities, Boko Haram has been pushed out of most of the northeast by the Nigerian military and a regional force. The government says the insurgents hold only two of the 20 areas they once controlled in Borno State.

But Boko Haram is still a threat. There are daily reports of armed attacks by groups of insurgents or suicide bombings on communities and markets, especially in Borno and Yobe states.

Babachir David Lawal, the secretary to the government of the federation, said the recent increase in terrorist attacks in public places was a sign that the group is losing ground territorially.

“Knowing that their days are numbered, it is clear that they [Boko Haram] have changed their styles and strategies and have now resorted to bomb blasts, even in religious areas.”

Want to go home, but can’t

While the vast majority of displaced people wish to go home, eight out of 10 said they didn’t feel safe enough to return, and 17 percent said they would need more money to do so, according to surveys conducted by the International Organization for Migration.

Many of the women IRIN spoke to at the Government Girls’ College camp expressed similar sentiments.

“There is no life for us here,” said Fanta,* a 35-year-old mother of four. “But when I think of going back, I remember the attack and my heart beats fast. I don’t think we are safe to return.”

The Protection Sector Working Group, co-led by the UN’s refugee agency, UNHCR, and the National Human Rights Commission, says all IDPs should be told the extent of the destruction in their communities in order to make informed decisions. Should they decide to return home, they must be given reintegration support, including cash and household necessities.

"We appreciate the Nigerian government's efforts in supporting IDPs and the desire to help them get back to their normal lives,” Enira Krdzalic, IOM’s chief of mission in Nigeria, told IRIN. “The majority of IDPs would like to return back to their places of origin, but IOM reaffirms its commitment… in ensuring voluntary, safe and dignified returns for IDPs."

NEMA officials declined to comment on the security situation or the relocation campaign, but continue to post flyers that read: “Come back home” and distribute leaflets to IDPs that assure their safety if they return. 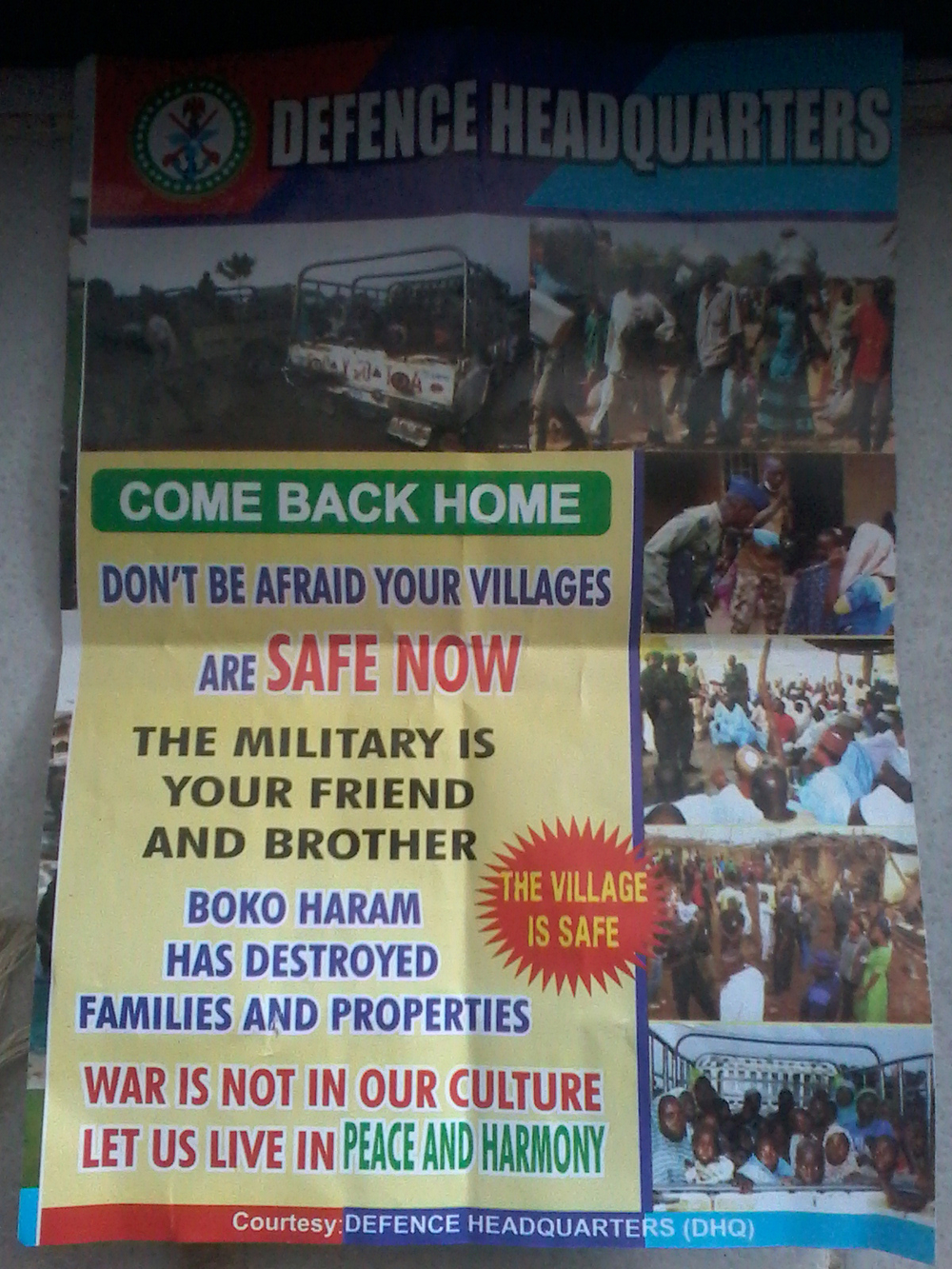 Nothing to go back to

Some 320,000 people have returned to Adamawa State during the past five months, following the government‘s recent push. The majority are farmers or traders.

Some hid stocks the attackers didn’t find. Others saved enough money to buy provisions or tools to till their land again. Most are having to start again from scratch. Houses have been destroyed, shops looted, schools burnt and fields lie barren. Many return to find water sources polluted with the bodies of people or animals killed by Boko Haram.

Until infrastructure and sanitation systems are restored, people have no choice but to boil up the contaminated water and drink it. Children remain idle as schools are closed, and the sick have nowhere to go as the hospitals are still not operational.

“The humanitarian response in the northeast has improved over the past year, but significant unmet needs remain, particularly in nutrition, health, food security and protection,” Yannick Pouchalan, head of mission for the French NGO Action Against Hunger, told IRIN. “There is a need to scale up the response to meet these needs to allow IDPs to live until they feel safe enough to return.”

Fifty-six-year-old Mustapha had enough of living in an informal settlement in the capital of Adamawa, Yola. He decided to go back to his village in Mubi, together with his six children and his wife, only to find his land burnt to the ground and his home half destroyed. He now lives in a makeshift shelter in the ruins of what used to be his home.

During his displacement, his family survived on help provided by NGOs and distant relatives. Once back in his village, he lost this support. He earns a little by working on other people’s farms, but any joy at returning quickly turned to frustration.

“I used to farm my own land and now I am dependent on others to feed my family,” he said. “I cannot send my children to school. Sometimes we eat only wild grass,” he said, covering his head with his hands.

“We need help to buy tools and seeds for our land and materials to build our homes. If not, then why did we come back?”

*Last name has been withheld