Since the beginning of this year, 2,860 migrants are thought to have died in the Mediterranean after setting off in smugglers’ boats from the Libyan coast towards Italy. Volunteers from the Libyan Red Crescent Society are left to deal with the decaying and bloated bodies when they wash ashore.

Working with scant support or equipment the 10 volunteers who make up the LRCS Tripoli team have salvaged almost 100 corpses since mid-September.

“The bodies usually reach the beach a day or two after a boat goes down, when the wind blows them back to the land,” explained LRCS information officer Malek Mohammed Mirsit. “The coastguard or local fishermen phone to tell us when they see pieces of wreckage or bodies in the water but, because we don’t have a boat, we just have to wait for the wind and waves to carry them to the land.” 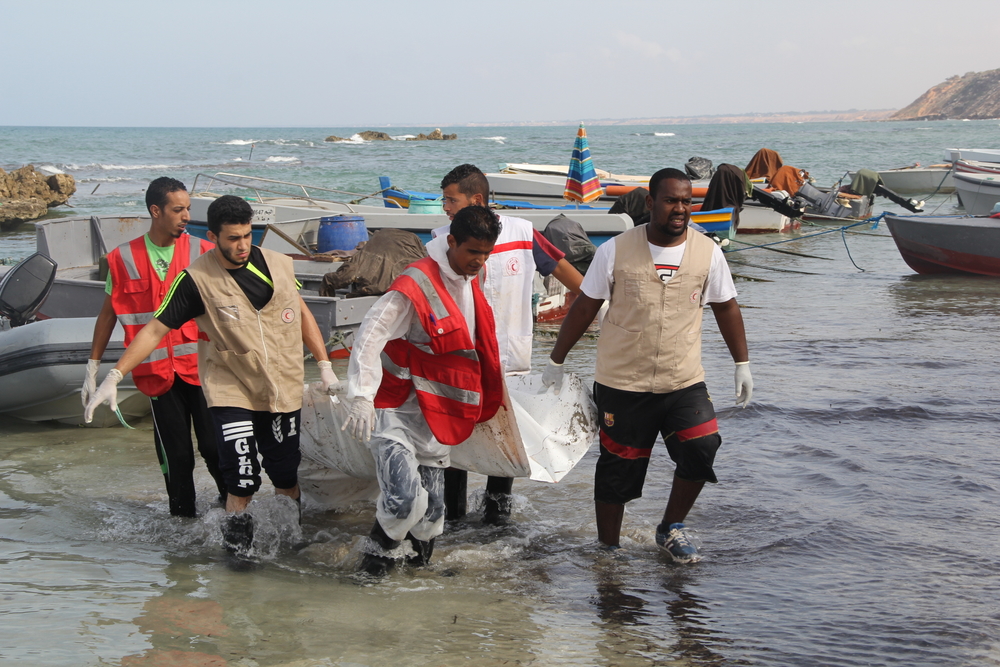 As the bodies start to wash up close to the shoreline, volunteers sometimes swim out to retrieve them.

“If the body has been in the water more than three days, it is in a bad way because of the salt water, which causes a build-up of pressure inside the corpse, making it swell,” said volunteer Houssam Nasser. 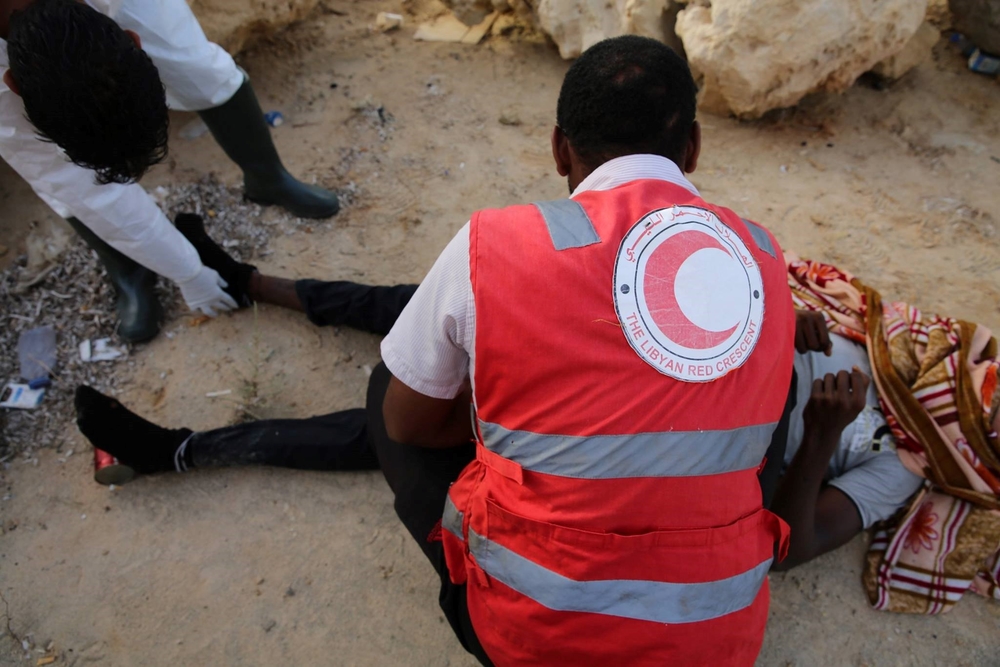 Libya’s instability and porous borders have prompted a rise in the numbers of migrants using the country as a launchpad for sea crossings to Europe since 2013, but Mirsit said the biggest increase in dead bodies washing ashore has occurred since mid-2014.

A recent crackdown on migrant smuggling gangs by security forces in Libya’s western town of Zuwara, which was one of the most frequently used departure points for migrants, has prompted smugglers to send more vessels out from the outskirts of Tripoli in the last two months. Although summer is peak season to launch boats, autumn continues to be busy as many migrants are desperate to reach Europe before winter’s rough seas make the journey even more treacherous.

Nasser recounted horrific details of bodies he has helped recover – stomachs burst open, brains pushed out through nostrils, fingers and wrists too swollen to remove a wedding ring or a watch: scenarios the team manages without proper protective clothing or even masks. 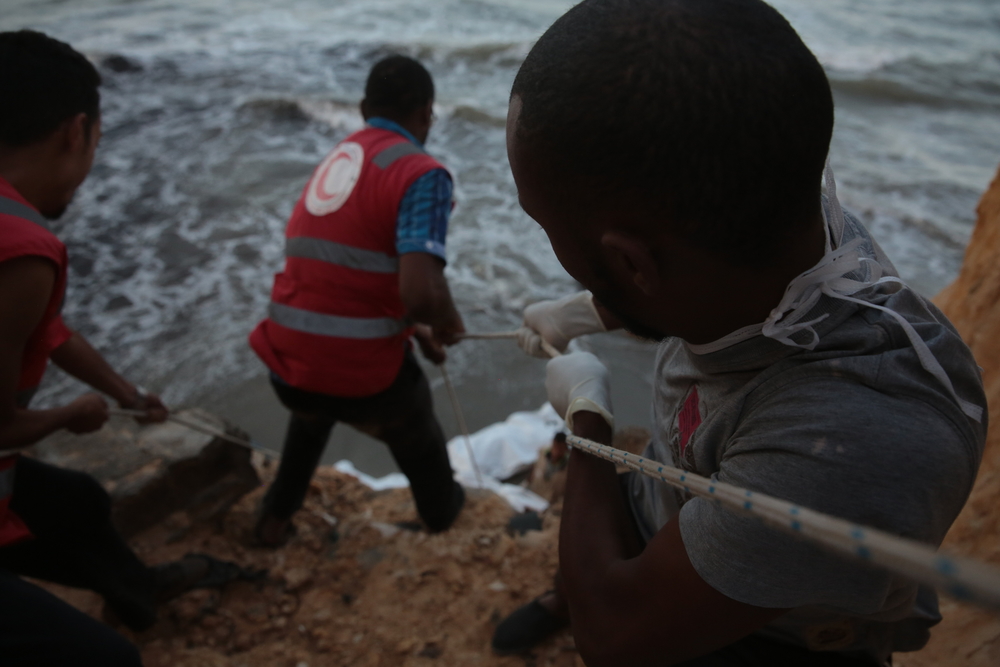 Mohamed Ben Khalifa/IRIN
Red Crescent volunteers use ropes to pull a salvaged migrant body up the cliff-face on the beach at Tajoura - a Tripoli suburb.

After collecting the bodies, the LRCS team loads them into the organisation’s only refrigerated ambulance so they can be transferred to one of Tripoli’s two main hospitals. Each body is then examined by a coroner to establish the cause of death, and DNA samples are taken.

“DNA testing in Libya is not very good, so the samples are sent to Jordan and later they send back the results,” explained Mirsit.

Identity documents rarely survive being submerged in the water and bodies are often unrecognisable after several days in the sea. The DNA results are stored in a database to ensure there is a record for every person found, hopefully making identification easier in the future.

Few migrants have relatives in Libya so the samples rarely produce an immediate match, but anxious relatives sometimes call in from other countries. “For example, yesterday somebody phoned from Sudan, and today a man came to the office worried about his brother who took a boat to Europe and hasn’t been heard from since,” said Omar Ali Mohamed, who manages the LRCS missing person’s department.

Relatives provide details of any marks or features that could help with identification – jewellery, a tattoo, even clothing. If they are able to visit Tripoli, DNA samples can be taken and checked against the database.

With so many bodies and so few volunteers, the team has to wait until there are more than 40 corpses in the morgue before taking them for burial. But funerary procedures are challenging. Medical staff and volunteers have to try to ascertain the religion of each deceased person. Identity documents or jewellery can help identify some as Christians, while male circumcision is one indication that a man might be Muslim.

In Tripoli, Christians are laid to rest in an Italian colonial-era Christian graveyard and Muslims are buried in a special cemetery allocated by the Tripoli authorities for the bodies of the unknown men, women and children who die in the Mediterranean.

A section of the cemetery is set aside specially for people whose religion could not be established. “We treat all these bodies respectfully, and in the Muslim tradition,” Mirsit said.

Each grave is marked with two pieces of marble engraved with an identification number that corresponds to the DNA database. One is placed on the surface and one inside the grave to ensure that, even if the surface soil is disturbed, the body could still be traced to the database. 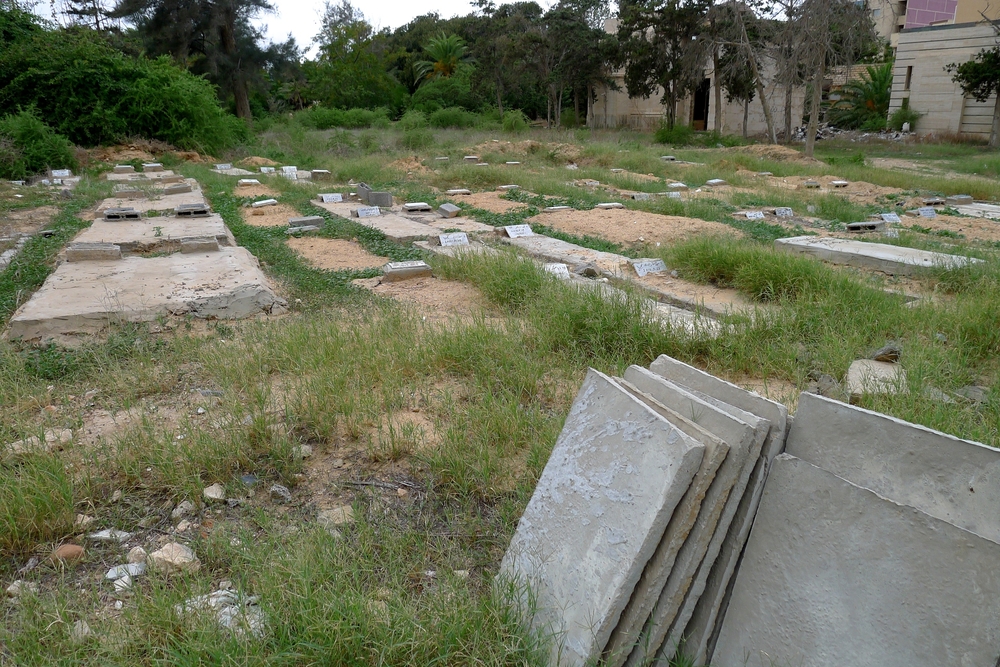 Tom Westcott/IRIN
Migrant graves in the Tripoli Christian cemetery. All have a headstone bearing the date of burial and reference number so they can be traced back to the DNA database.
Only three of the volunteers have received formal training from the Libyan branch of the International Committee of the Red Cross, which has been based in Tunisia since fighting in Tripoli started in the summer of 2014.

“Many of our volunteers are young people who want to help this country,” said Mirsit. “It’s about humanity and wanting to help where we can.”

Stephen Fonseca, a forensic advisor to the ICRC, described what the LRCS volunteers do “as exceptional humanitarian work performed under difficult conditions.”

The ICRC started training and equipping the Libyan teams in dead body management in 2011 to respond in conflict-hit areas. Ammar M. Ammar, a spokesman for the ICRC, explained that the organisation had increased its support to the teams in the last couple of years as the security situation deteriorated and increasing numbers of dead migrants started washing up along the Libyan coastline. Support has included the training of more than 80 volunteers in the proper handling of dead bodies as well as the provision of body bags and some protective equipment.

This support falls far short of what is needed, according to Abduhamid Swehi, who heads the Tripoli dead body management team. “I’m working with nothing and I need so many things,” he said. “We don’t have proper protective clothing and most volunteers wear normal clothes when rescuing bodies. We desperately need a boat to help with our salvage operations, and another vehicle.”

Ammar said the Red Cross had sent 1,345 body bags to 12 LRCS branches since the start of the year, but Swehi said the number of bags the Tripoli team receives is rarely sufficient. 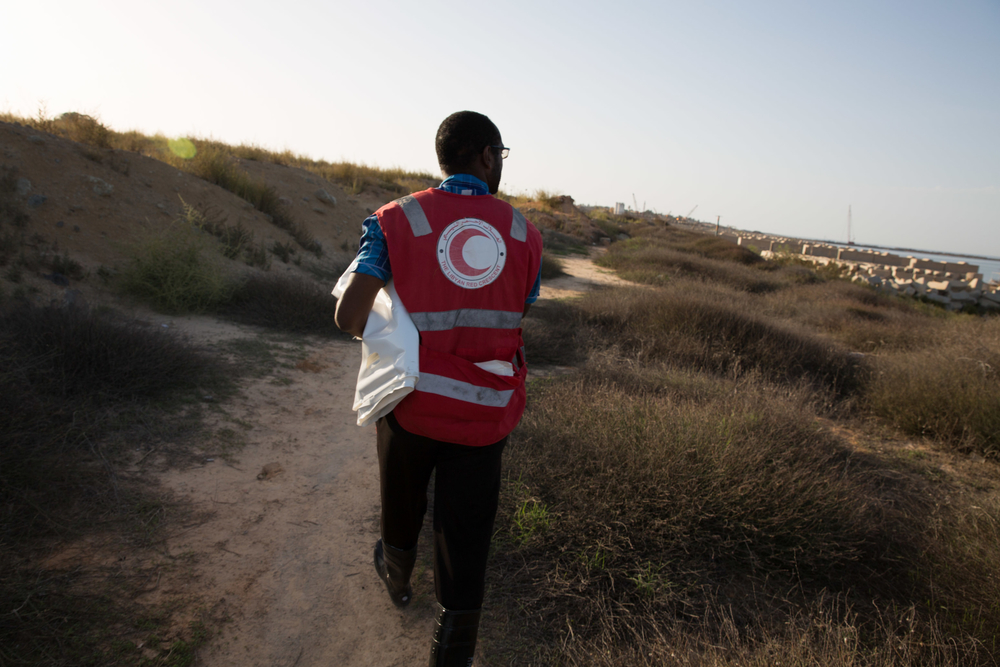 The little money the LRCS receives comes from donations from members of the public and local businessmen, often alerted to the desperate situation by the organisation’s Facebook page.

“We get no government support at all,” Swehli explained. “We continue to do the best we can but we would welcome any help – donations of equipment or money – from international organisations or the international community.”