It is a bold claim, but Chris Natale, former country director of humanitarian relief agency Norwegian People’s Aid (NPA) in Senegal, is speaking from experience garnished with frustration.

Thousands of landmines lie scattered throughout southern Senegal, placed both by the Senegalese military and Movement of Democratic Forces of Casamance (MFDC in French) rebels during more than 30 years of sporadic conflict.

According to Handicap International, between 1990 and 2008, landmines killed or injured approximately 1,000 people in the region, which has seen its vital agriculture, fishing and tourism industries crippled by the scourge.

The number of victims is decreasing, but the Casamançais are still afraid of losing limb or life. Many families have not returned to their villages and the region remains economically depressed. Horrific incidents also still occur. Last August, for example, seven wedding guests were killed and three injured when their cart struck a mine near the Gambian border.

Hundreds of thousands of dollars in international funding have been targeted at the problem, but political intransigence and vested interests are continuing to block demining activities while the people of Casamance pay with their lives.

"While  conventional wisdom has it that the rebels are responsible for laying the mines, an overwhelming body of evidence suggests rebel use was more sporadic, and that the Senegalese Army also placed hundreds (if not thousands) of landmines around many of its outposts in Casamance, where they remain to this day," said Natale.

As a signatory to the 1999 Ottawa Convention on landmines, Senegal – through newly-elected President Macky Sall – formally requested foreign assistance to support government anti-mine body CNAMS in 2012.

Natale arrived in Casamance on a mission to clear every landmine by a recently extended 2016 deadline using specialist demining teams and explosives-sniffing dogs.

“We were very optimistic when we started in September 2012. We were positioned to offer an extremely efficient demining capacity the likes of which had never been present in Senegal,” he told IRIN.

"We never heard of the existence of any Casamance landmine database. CNAMS has never allowed us to talk with the deminers. CNAMS excels at its complete lack of clear communication with us.” - Abdou Elinkine Diatta, MFDC spokesman

The work started well. His team produced a comprehensive database with maps showing what had been done and what still needed to be done in order for Senegal to be mine-free.

For the demining operation to be truly effective, however, it would require the cooperation of both sides to establish where the weapons were laid.

But shortly after NPA began its work, CNAMS told it and two other demining organisations – South African commercial company Mechem and Handicap International – not to talk to the rebels or the Senegalese military.

“We were forced out of communicating with the most important actors and sources of information, only able to meet with them in secrecy and when occasions presented themselves without CNAMS involvement,” said Natale.

One such meeting with an active duty army captain who had spent several years serving in Casamance went as follows, according to the former NPA director.

“He and I used my laptop to scour countless former army outposts using Google Earth. He would just rattle off the places where he knew from first-hand experience there were mines, saying: ‘Yep, we had mines there. Nope, not there I don’t think’.”

Being able to access that kind of information officially, rather than through clandestine meetings, would have made demining Casamance faster and more cost-effective.

This lack of direct access to the military was a constant thorn in NPA’s side.

“When most of the bureaucrats and politicians responsible for ensuring the country respects its treaty obligations to clear its minefields refuse even to acknowledge behind closed doors that their own military knows better than anyone else where their mines in Casamance are, it makes the whole effort to remove them a complete farce,” Natale said.

NPA was occasionally able to assemble representatives from various abandoned villages near the border with Guinea-Bissau and ask them to describe where they had seen mines and to draw maps in as much detail as they could remember.

Those who returned to their villages from time to time to check up on orchards or houses were able to explain where, for example, the army had laid mines around their old positions in the schoolhouse, or where the MFDC had placed an anti-tank mine on a dirt track.

Yet the Senegalese anti-mine body steadfastly refused to allow NPA or Mechem to deploy teams to verify information on the ground. 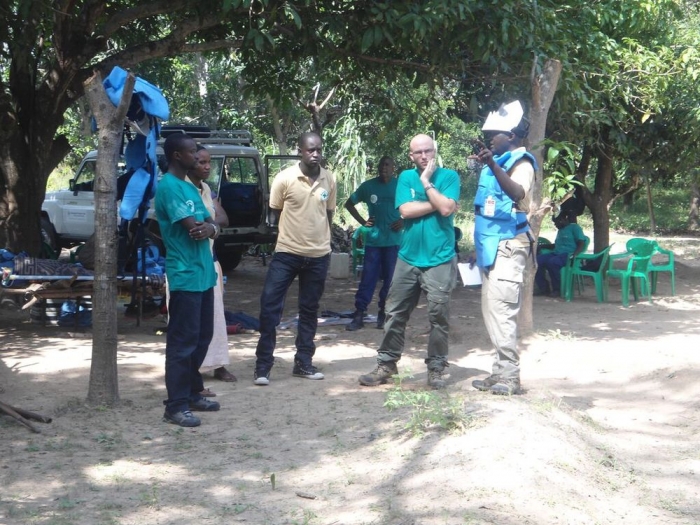 FROM SLOW PROGRESS TO NO PROGRESS

In May 2013, things took a sharp turn for the worse. Rebel forces took 12 demining personnel from Mechem hostage.

César Badiate, leader of one MFDC faction, said the team had crossed into rebel-controlled areas where its security could not be guaranteed.

Badiate demanded negotiations to establish an agreement between CNAMS, the Senegalese government and the MFDC before demining operations could continue.

CNAMS promptly halted all work for six months. NPA and Mechem were diverted to conduct technical surveys along a major highway called Route National 6 (RN6), under construction as part of US aid efforts.

"Demining outside the RN6 is no longer safe and therefore impossible before a peace agreement has been signed between Senegal and the MFDC," CNAMS director Sidy Barham Thiam said.

“There was overwhelming evidence in the database that these areas had already been subjected to visit after visit by personnel from CNAMS, Handicap International, and most recently NPA, with each instance confirming that none of the communities there felt landmines were a problem where they lived.”

Natale has a theory as to why the MFDC was happy for international teams to focus their resources on the main highway.

“It was of no strategic importance to them, and in fact they received extravagant per diems just for showing up at the meetings organised by CNAMS to discuss it.”

“There are other areas that are of a higher threat to the people of Casamance,” he said.

But CNAMS insists that demining the land for the new highway is the top priority, describing the project as one of “national and regional importance."

“If the RN6 is not ready in time, I will be responsible for it,” Thiam told IRIN.

The agency director maintained that CNAMS communicates with everybody transparently, but MFDC spokesman Abdou Elinkine Diatta told IRIN this was not the case.

“We never heard of the existence of any Casamance landmine database. CNAMS has never allowed us to talk with the deminers. CNAMS excels at its complete lack of clear communication with us.”

"The continuing conflict also benefits many intermediaries for whom this has become a livelihood and sometimes a political springboard.” - Jean-Claude Marut, Casamance expert

After several ultimately unsuccessful meetings with government representatives, NPA decided to withdraw from Senegal altogether, prompting the EU not to renew its funding for demining projects in Casamance.

The EU cited a “total lack of mid- and long-term strategy outside RN6 from CNAMS.”

With the loss of EU support, the state’s demining budget has been drastically cut. Mechem is now the only organisation left demining in Casamance, and only around RN6.

Natale is disappointed, but he says he doesn't regret confronting the political powers that he believes are intentionally delaying the possibility of a landmine-free Senegal for their own strategic ends.

“Without us eventually making such a stink, well-intentioned donor countries would still be apt to sink their money in demining operations in Senegal that essentially boil down to wild goose chases.”

With no peace agreement and therefore no more demining operations in sight in the near future, French historian and Casamance expert Jean-Claude Marut explained how this status quo of perpetual conflict benefits all the main protagonists.

"Having a gun is a way of life," he told IRIN. "The state, which is not threatened, receives external aid, the army draws resources and is involved in the lumber trade, the guerrillas have developed a war economy based notably on a lucrative trade in cashew nuts, lumber, drugs smuggling and looting.

"The continuing conflict also benefits many intermediaries for whom this has become a livelihood and sometimes a political springboard.”

The fact that so many places are supposedly no-go zones also legitimises and underlines the state of war.

It looks like it's all going to take a lot longer than six months.