Most commonly associated with spying and military missions, the use of unmanned aerial vehicles (UAVs) – or drones – for humanitarian purposes is the subject of both hype and caution.

Sceptics are wary of the ethical and practical implications, worried about human rights and security aspects and unconvinced by their capabilities and relevance.

But experts argue they could play an important role in disaster relief as well as having other useful civilian applications.

A two-day event hosted in the United Arab Emirates (UAE) this weekend presented some potentially positive uses for UAVs in civilian and humanitarian settings offering big money prizes to the best ideas.

“Drones don’t have a great reputation,” admitted Patrick Meier, the director of social innovation at Qatar Computing Research Institute (QCRI), and a leading advocate for UAVs in the humanitarian sector, who helped judge the Dubai competition.

Sanad, an octocopter or eight-rotored drone, created by an engineer at Dubai Police, can fly up to 1 km and lift about 40-50 kg of weight using one of its life-rings. 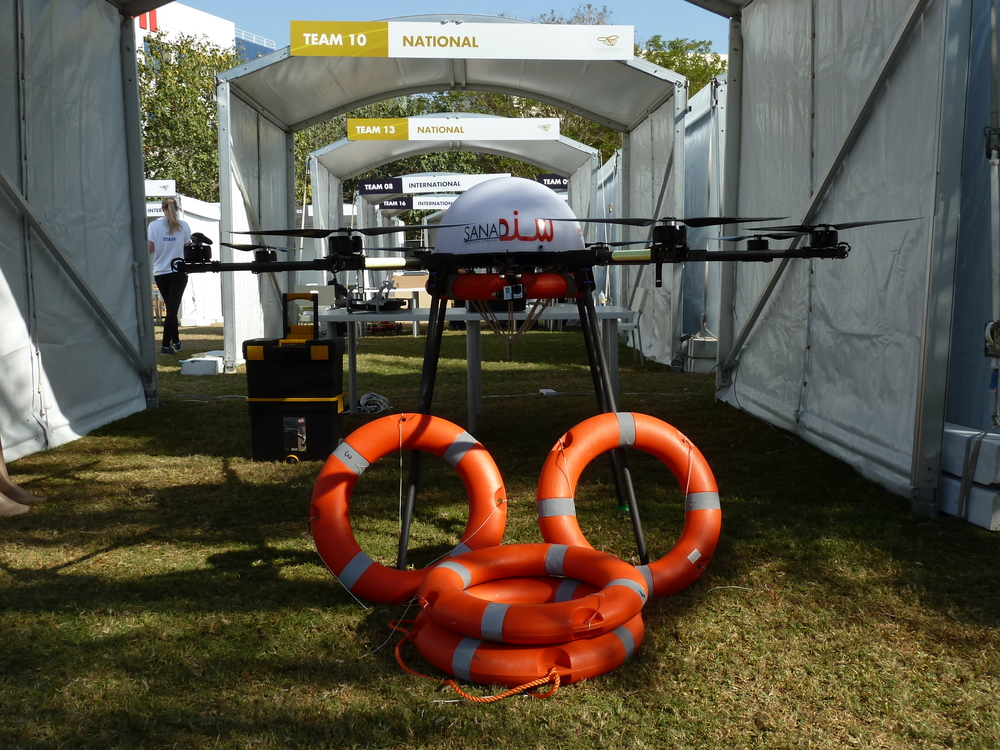 “Don’t forget in the past we used to associate satellites with the Cold War and the military, but that has now changed, thanks to the democratization of imagery.

“Hopefully as the public see more examples of drones doing good, of stopping animal poaching, of saving lives in search-and-rescue efforts or delivering medicines to remote parts of Africa, then perceptions will change,” said Meier, also the co-founder of the Digital Humanitarian Network (DHN), a membership platform for digital disaster response.

The “Drones for Good” event brought together hundreds of teams from nearly 60 countries with the brief to create a civilian drone to “improve peoples' lives”.

Alongside commercial concepts to regulate parking and monitor traffic, there were a number of prototypes that could be used for search-and-rescue, re-forestation, medical delivery, landmine detection and rural mapping.

The top prize of US$1million went to Swiss team, Flyability, for its collision-proof drone “Gimball” that can enter collapsed or burning buildings and beam back footage from inside.

Unlike regular drones which are fragile and prone to crashing, the Gimball is suspended in a protective frame and can bounce off hard surfaces and roll along floors and ceilings.

“Our drone can be sent anywhere and can be operated by non-experts
because it’s easy to pilot,” co-creator Adrien Briod told IRIN. “It
could be used in many situations, in a collapsed building, in a forest,
in a search and rescue mission.

“For now, we are targeting industrial inspection but
search-and-rescue is definitely a potential use and I think it will
come, but only once we have perfected the technology because when it’s
people’s lives involved, you have to be sure the technology is 100%
reliable.”

Another finalist was BioCarbon Engineering,
a UK-based team that has developed an UAV to deliver rapid
re-forestation to in hard-to-reach areas by mapping and then firing
planting pellets into targeted zones.

“Our technology is ideal for mosaic reforestation that is hard to
reach, say a patch in the middle of a forest, and it could be applied to
contaminated land that humans can’t access,” explained team-member and
forestry expert Irina Fedorenko.

“In the future we would definitely like to work with NGOs and local
communities and to promote sustainable forestry and there could be scope
for communities who take part in re-forestation to profit from carbon
credit schemes.”

The winner of the national competition – and AED 1million (US$ 272,000) - was a group of students fromNew York University (NYU) Abu Dhabi. Their  Wadi Drone, which weighed 2.2-kg, can fly for up to 40km without a recharge.

It has been designed to assist park rangers with the collection of data from camera traps, but Meier said: “There is huge potential for this sort of technology to be adapted to a crisis situation. It could be very a useful way to collect data and images from disaster areas when cell and 4G networks go down.”

And he added: “There was another very interesting design which proposed to carry organs for transplantation. This could easily be adapted to cold-chain delivery of blood supplies or even vaccines and would be ideal for places like Liberia where even short distances can be inaccessible by road due to heavy rains.”

José Luis Angoso, director of innovation and alliances at Spanish technology firm Indra, told IRIN: “I am totally convinced that drones have a humanitarian application, there is huge potential.

“But this needs to be a two-way conversation, humanitarians need to engage with the drone creators to outline what they want and need, rather than dismiss technology because it does not fit their purpose.”

In August last year the UN Office for the Coordination of Humanitarian Affairs (OCHA) launched its first policy paper on the humanitarian application of UAVs, and in November hosted a strategy session at the UN Secretariat in New York to discuss the paper and potential humanitarian uses for drones.

Other non-military uses of drones to date have included 3D modelling of river valleys for hydrological analysis and flood protection in Haiti, and disaster mapping following Typhoon Haiyan in the Philippines.