The murders of more than 250 men, women and children in eastern Democratic Republic of Congo’s (DRC) Beni Territory in recent weeks have widely been blamed on an insurgency of Ugandan origin known as the Alliance of Democratic Forces-NALU (ADF-NALU). But several armed groups and racketeering gangs are active in the area and the culprits of these killings have not been incontrovertibly identified.

The killings were carried out, in various episodes between 2 October and 7 December, using knives, machetes and hoes, in parts of Nord Kivu Province, on some occasions in close proximity to positions held by the national army (FARDC) and bases of the UN peacekeeping mission in DRC (MONUSCO).

Just in the 48 hours leading up to the night of 7 December, 50 people were killed in two parts of Beni Territory, according to Civil Society in North Kivu, a local organisation.

The attacks have led more than 88,000 people to flee their homes, according to a statement released on 9 December by the humanitarian coordinator in DRC, Moustapha Soumare.

“People are now living in abject fear of further attacks. In this climate of generalized insecurity, the reduction of humanitarian access to vulnerable people in affected areas has only increased their distress,” he said.

A report published by a parliamentary delegation in late October after a tour of affected areas, namely Beni, Oicha Eringeti and Ngadi, detailed the brutality of earlier killing sprees:

"There were smashed and burned houses; fabrics and bednets were used to bind the victims before slaughtering them, disembowelling them and cutting them up... The exceptionally violent killings were perpetrated in urban areas between 6.00pm and 8.30pm. The attackers used machetes, axes, hammers, knives, hoes, large stones and firearms... These attackers killed and looted (goats, chickens and food) at the same time.”

"The attackers were dressed in military uniforms, in cassocks, and some were disguised as women (cloths, blouses, scarves) in Ngadi,” the report said.

“While we know the ADF shifted a gear in the last few years into a hardened, well-financed and regulated outfit, these local businesses - taxis, shops and so on - continued. This is where the logic of a military solution collapses”

Civil Society in North Kivu appears to share some government officials’ belief that ADF-NALU - an insurgency of some 800 to 1,400 fighters of Ugandan origin but based in DRC since 1995 - is behind the violence. FARDC, with support from MONUSCO, launched an offensive, code-named Operation Sokola - the Lingala word for “clean” - against the ADF in January 2014.

ADF-NALU itself has no spokesman or social media presence.

“It is really the terrorist group ADF because there is no other armed group operating in this part of the country between Kayinama and Mwalika. They recruited people in DRC, Uganda and Rwanda,” said Teddy Kataliko, chairman of Civil Society in South Kivu.

Kataliko said this explains why several witnesses told the parliamentary commission that the attackers were speaking in languages identified by survivors as Swahili, Kiganda and Kinyarwanda, which are spoken in DRC, Uganda and Rwanda respectively.

Kataliko also said the army had been infiltrated and that some soldiers were involved in racketeering and selling uniforms.

“There must be an investigation and an internal audit of the army to understand the extent of the complicity,” he said.

The parliamentary report mentions "an enemy still unidentified, although it might loosely be described as ADF”.

Dozens of people were arrested after different killing sprees, in circumstances that were not made clear. Once, three men were paraded on TV, together with the machetes they were alleged to have used to kill civilians.

"The perpetrators of the killings are the ADF,” North Kivu Governor Julien Paluku insisted.

“Of 53 rebels arrested, 30 are Ugandan and 23 are Congolese who fought in RCD/KML,” he said, referring to a rebel group involved in DRC’s second (1998-2003) civil war led by Mbusa Nyamwisi, who is alleged to have business ties with the ADF. 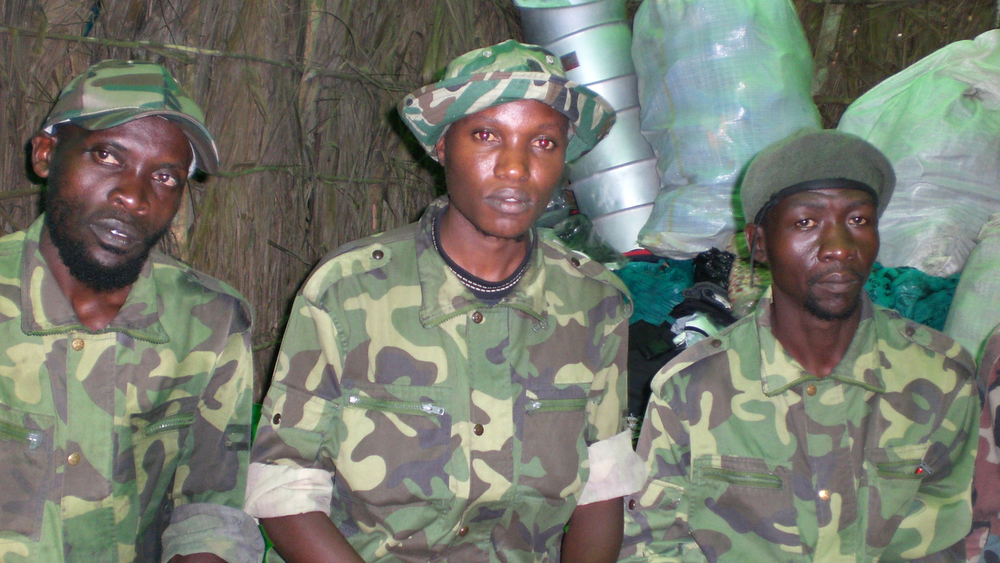 Among those detained “there are also residual elements of the M23 [a Tutsi-led insurgency which was defeated in late 2013] and former disgruntled rebel chiefs," said Paluku.

He said the massacres were designed to traumatize the local population so that a nascent new rebellion could emerge and style itself as a liberation force.

In late November, government spokesman Lambert Mende told a news conference that investigations had shown that “several hitherto unsuspected national and regional actors have played a decisive role in this terror offensive.”

“Among those arrested we even have some compatriots belonging to certain active political formations,” he said.

When asked if any DRC officials, notably within the security services, had any involvement, Mende said: “Yes, some Congolese people, at all levels, are implicated.”

For Thierry Vircoulon, International Crisis Group (ICG) director for Central Africa, the "ADF has always been very brutal and non-communicative. Previously, they used to establish a security perimeter around their area by terror, including killing villagers who did not respect the perimeter, and displaying their bodies on the roads. The Beni attacks are a very clear message to the Congolese government which launched an operation against them at the beginning of the year: ‘You have not defeated us and we are able to spread terror where and when we want.’”

But some are wary of pointing the finger unquestioningly at ADF-NALU. Caroline Hellyer, a British journalist and political analyst who has written extensively about the group and Beni Territory, noted in an article published in mid-October that there were many other plausible suspects.

In Oicha, for example, she wrote, there are “large groups of unemployed young men hanging around aimlessly with little or nothing to do. These young men are the fodder for the fragmented local Mai Mai groups that are often formed by disgruntled ex-soldiers and manipulated by local politicians.

“Sometimes these groups of young men organise to protect their villages but too often economic necessity and the entangled politics of the region suck them into the networks of militias that shift and change sometimes on a weekly basis.

“All the hallmarks are present, including the type of weapons used - machetes - that indicate it was one of these networked Mai Mai groups that has been responsible for the recent attacks. They operate between Lubero and Rwenzori and right across the Grand North. They function as a call-out service for local politicians, bigger Mai Mai groups and local gangsters,” she wrote.

Soumare’s statement did not mention any group by name, warning “all those who are implicated one way or another in these atrocities” that their crimes would not go unpunished.

The army resumed its offensive against the ADF in December. But there are doubts as to its chances of success - previous attempts in 2005 and 2010 failed - and even as to the very wisdom of a military solution.

“This armed Congolese-Ugandan group has demonstrated extraordinary resilience in maintaining its geostrategic position, its involvement with cross-border trade and its corruption of the security forces," ICG wrote in a 2012 paper.

Hellyer explained that “while the ADF has a very solid nucleus… like a set of Russian dolls it is highly compartmentalized. This enables the rebels to maintain a multi-level network that provides it with sources of finance and support that extend to the transnational.

“Despite having a Command Group that operates outside DRC, for over 25 years the ADF has been locally embedded and a provider of employment via its various semi-legitimate business operations.

“While we know the ADF shifted a gear in the last few years into a hardened, well-financed and regulated outfit, these local businesses - taxis, shops and so on - continued. This is where the logic of a military solution collapses,” she wrote.

Some among the local population certainly seem to have lost faith in both FARDC and MONUSCO.

On 21 October in the settlement of Mbau, 25km from Beni town, a patrol comprising troops from both entities came under attack by youths carrying machetes, one of whom was shot dead in the fracas.

The following day, in Mavivi, about 10km from Beni, hundreds of citizens marched on a MONUSCO base singing (in Swahili), “We don’t want you here any more. You are doing nothing for us.” The entrance to the base was damaged, and some looting was reported.