It is still dark when the minibus rolls into Jerusalem, picking up Israelis bound for occupied Palestinian land. Their leader, a rabbi, dons a shawl and quietly prays in the back seat.

During the autumn olive harvest, Palestinian villagers are especially nervous about visits from Israelis: Last year the UN recorded 38,532 trees destroyed or damaged incidents linked to Israeli settlers between 2009 and the end of August 2013. These are part of a strategy of so called "price tag" attacks carried out by settlers, often coming after actions by the government seen as counter to the settlers' agenda, or following perceived violence from Palestinians.

But armed with sunhats and bottles of water, these Israelis have come to help not destroy.

As the elegantly mustachioed Palestinian driver Abu Rami stops for the rest of the day’s volunteers, Rabbi Yehiel Grenimann, the director of activity in the Occupied Palestinian Territory (OPT) for a group called Rabbis for Human Rights (RHR), returns from the back of the bus to announce it is headed for Bil’in, a Palestinian village that straddles the border of Israel and the West Bank.

The volunteers did not know their destination until they boarded - it is a security precaution, as the olive harvest, which traditionally begins after the first autumn rain, is a particularly prickly part of the Israeli-Palestinian conflict. During the 2013 harvest season, Israeli human rights organization B’tselem documented 27 cases of abuse of harvesters and property damage by extremist Jewish settlers.

Already this year, arrests were made after a group of Israelis allegedly attacked a Palestinian family gathering olives in the West Bank village of Kfar Yassuf.

The Israeli volunteers hope to act as a buffer against such violence: They pick olives in areas closest to troublesome settlements and document any incidents that should arise.

RHR spokesman Yariv Mohar says “when volunteers and cameras are there, [settlers] are afraid [their actions] might go to the media, so sometimes they take us more seriously. Some of them are more hesitant [to attack].”

The volunteers also step in when, due to government restrictions, Palestinians have limited time and manpower to harvest their olives.

This is the case in Bil’in, where Israel’s security wall, which was first erected in 2003, has split the village from most of its agricultural lands, sparking weekly protests. Israel argues the wall is necessary to protect its citizens from terrorist attacks; opponents say it limits freedom of movement and is tantamount to a seizure of Palestinian land.

In between the wall and the border is the “seam zone”, apparently intended as a security buffer between Israeli towns or settlements and Palestinian villages. In the case of Bil’in, most of their olive groves sit in the zone, in a valley beneath new construction for the Orthodox Jewish city of Modi’in Illit, considered by the international community to be an illegal settlement.

Villagers need permits from the Israeli army to cross onto their land, and these can be hard to come by. They are also only able to enter when the military decides: On the day the volunteers from RHR arrived, the Palestinians were told to arrive at the gates of the zone at 7am - two-and-a-half hours before the gates were opened.

Shaking the top branches of a tree with a small, Fatimeh said that of her family, only she and her school-age children had been granted permission to come to the harvest. Her husband and elder sons were turned away.

With some 40 trees to harvest, the volunteers are a boon to her season, as like many Palestinians she relies on the olive harvest. Around 80,000 families rely on the olive business, which is worth over $100 million annually and makes up 14 percent of agricultural income for the OPT.

Fatimeh was pleased to see the group of six helpers, and while she and newly retired tour guide Ellen did not have a common language, the Israeli woman found a bucket and quickly got to work.

Palestinian olive pickers are often attacked by Israeli settlers. Yet some Israelis work with Palestinians to protect them and help them pick the harvests. 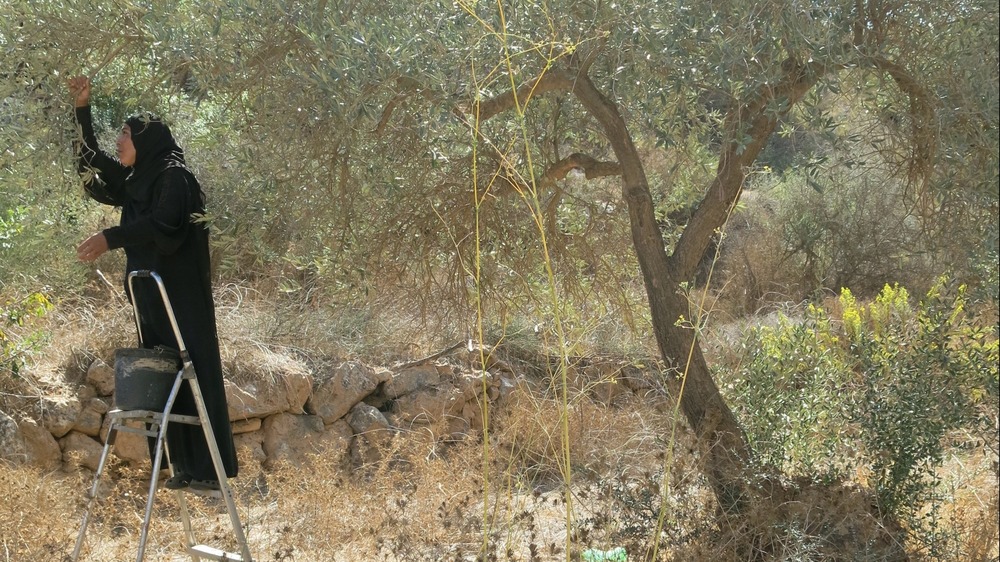 Ellen is not much of a talker on the human rights issues she holds dear anyway. “But I can pick olives off of a tree, even if I can’t speak about it very well.”

She has been helping out with the olive harvest for some 10 years: “I’m an Israeli, I’m here, and maybe they [Palestinians] can see a different kind of Israeli other than a settler or a confused and angry soldier.”

Fatimeh was happy to have the extra labour: “They’re good people to come here. It can be scary.” Most importantly, she grins, “I hope they’re good workers!”

Mohammad Mansour, who has 19 trees in the grove, was also pleased to have the assistance, although there was not nearly as much work as he had hoped. Because he does not have permission to tend to the trees as much as he would like, they are simply not producing. He grabs a scrawny branch with no fruit: “the trees just don’t yield like they used to.”

RHR has been going out to harvest for some 10 years. They are dedicated to human rights in the Occupied Territory as well as inside Israel. Their current president, Rabbi Arik Ascherman, carried out a campaign of civil disobedience, including placing himself in the way of a bulldozer destroying a residence in Palestinian East Jerusalem.

Grenimann himself has been arrested once and detained a few times, but he believes his work has a basis in Jewish tradition.

“We read [in the weekly Torah reading]… that all human beings are created in God’s image… It’s not as if we are inventing something that isn’t there [in the scripture].”

The rabbis average 10-15 volunteers a day, and sometimes bring groups from synagogues and rabbinical students. But there are fewer volunteers in recent years, Grenimann says, in part because some Palestinians have become concerned about accepting help on the grounds that it constitutes “normalization” of relations with Israel. RHR is a Zionist organization, although its members define Zionism in a variety of ways.

Mansour is not concerned about having Israeli help or the appearance of it. “We can work together just fine. It’s the people at the top who don’t want us to be good neighbours.”

Another reason there are fewer volunteers, Grenimann offers, is that “the left in Israel has shrunk, it’s just a fact.”

This summer’s war between Israel and Hamas, the militant Palestinian faction that has controlled Gaza since 2007, was rough on the Israeli left. Vocal critics of the war were deemed traitors and some received death threats, as far-right extremists gained traction.

Yoel, a 78-year-old retired agriculturalist with a grey cap on his head and a steady picking arm, is less concerned about left-right divisions. The veteran of several wars says his weekly participation is a self-styled treatment for post-traumatic stress disorder (PTSD).

“For me the occupation is the trauma, and the root of the cultural and economic problems in Israel,” Yoel says.

“Honestly it’s probably selfish of me. I know that [the Palestinians] can do it without me but maybe it helps deal with some guilt,” he says frankly.

By the time Abu Rami returns to pick up the volunteers in the afternoon, they have shared a meal with their Palestinian hosts, and doted on Mansour’s baby daughter. The Israelis are free to leave immediately, but the locals cannot go home until the army opens the gate to their village in a few hours.