More than 80,000 Central Africans have fled the worsening conflict into neighbouring Cameroon since the start of the year. But as the influx continues, aid officials warn that donor support is not keeping pace, hobbling relief efforts and leaving refugees ever more vulnerable.

The UN Refugees Agency (UNHCR) says that only US$ 4.2 million of the $ 22.6 million it needs to assist those escaping violence in the Central African Republic (CAR) has been received, and just 12 percent of the $ 247 million requested by 15 aid groups to respond to the influx from CAR has been funded.

Some 226,000 people have fled CAR to neighbouring Cameroon, Chad, the Democratic Republic of Congo and the Republic of Congo since December 2013. Of the four countries, Cameroon hosts the largest number of refugees.

“If we don’t tackle this in a very urgent and coordinated way, I am afraid the crisis will be much bigger,  especially when we all know that unfortunately the CAR crisis is not going to be fixed that soon,” said Najat Rochdi, the UN resident coordinator for Cameroon.

Part of the problem is Cameroon’s own profile, Rochdi argues, also pointing out that there are few humanitarian NGOs in the country.

“Cameroon was never on the map of the humanitarian community or known for being a humanitarian emergency,” she told IRIN. “The government in the past never issued an appeal and never officially asked for any help while Cameroon has been the host country for refugees going back over years. That is why the funding is coming very slowly.”

Before the latest influx, Cameroon provided refuge for some 90,000 CAR refugees who arrived in 2004. Many of those escaping the recent upsurge in violence in CAR have been attacked and injured en route. Refugees talk of their family members being killed in raids by anti-balaka militia fighting gunmen from the Séléka rebel coalition that toppled President François Bozizé in March 2013.

According to UNHCR and World Food Programme (WFP), acute malnutrition rates among refugee children under the age of five arriving in Cameroon are between 20-30 percent, well above the 15 percent critical threshold set by the World Health Organization for emergency interventions, “We must all act now or more children will needlessly suffer. We must intervene to save lives and prevent a worsening situation,” WFP Director Etharin Cousin said at a recent meeting in Rome.

At a 12-bed ward at a hospital in Batouri town in the east of Cameroon, dozens of children have been admitted from a transit camp near the CAR-Cameroon border for treatment of severe cases of malnutrition and other ailments. More keep arriving to the hospital, outside of which piles of bricks and timber lie as UNCHR works to expand its capacity.

“We make do with what is available,” said John Majaliwa, a UNHCR nutritionist, explaining that many of the children have been weakened by the torturous escape from CAR. “The children are very thin. We have cases of marasmus and kwashiorkor. All the children brought here have other ailments such as anaemia or malaria.”

Aid groups are providing food, shelter and medical care to the thousands of Central African Republic refugees at a transit camp from where they are transferred into village settlements in eastern Cameroon 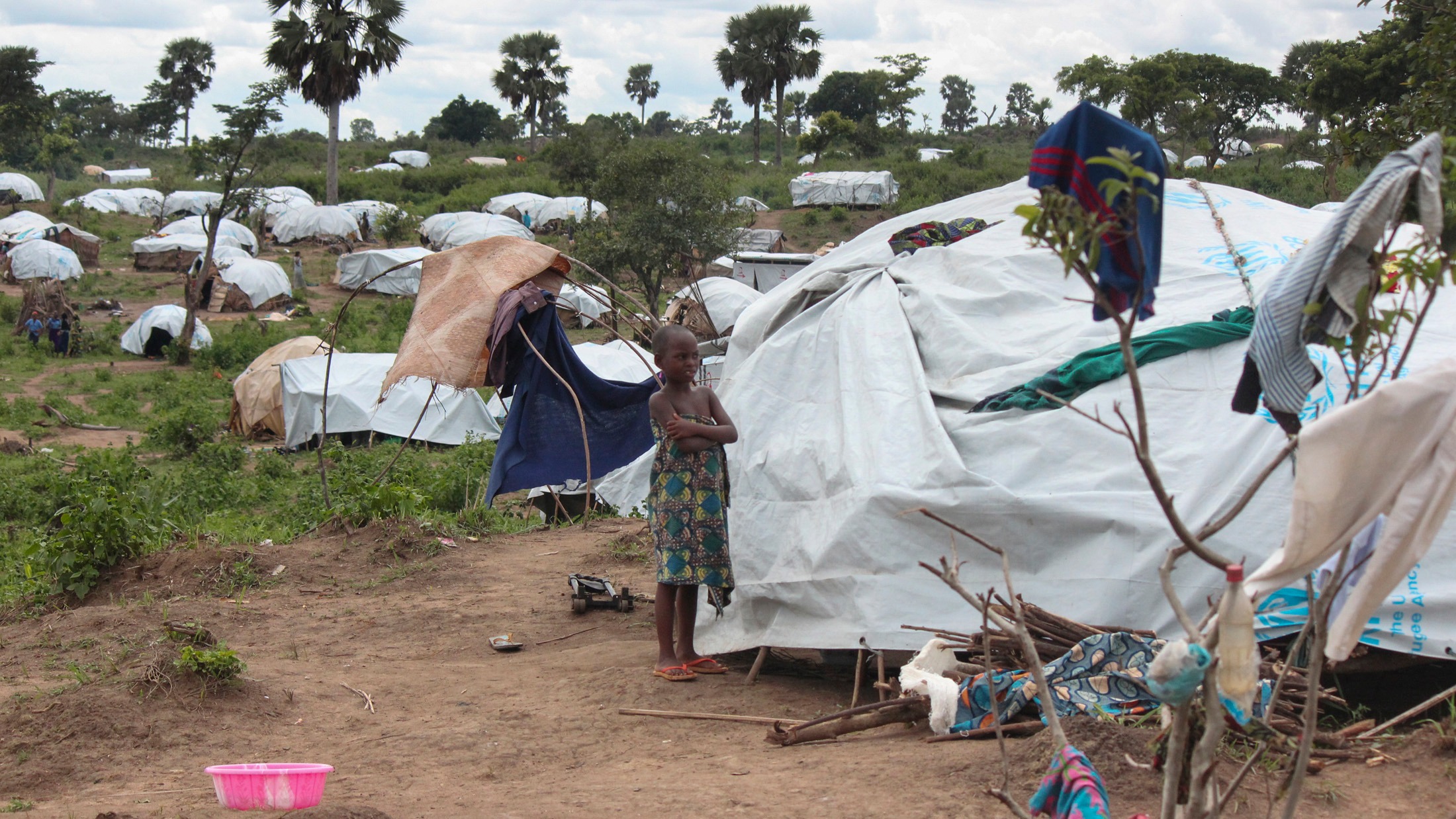 More than half of the refugees streaming into Cameroon’s East, Adamaoua and North Regions are women and children. They are mainly Muslim and from the nomadic and cattle-keeping Mbororo ethnic group. The UNHCR is currently relocating some of the refugees from Gbiti, one of the main entry points on Cameroon’s border with the CAR, into settlements established within villages. The refugees tell chilling tales of escape from CAR.

An aid official recounted to IRIN how gunmen attacked a family of five, shooting the husband in the leg to immobilize him. The man then told his family to carry on and leave him behind. But days into the trek and with the party’s feet  extremely sore, his wife was forced to abandon two of the children who could no longer walk, arriving in Gbiti with the child she carried on her back.

The armed attackers would also lay dead bodies on the road to deter those fleeing. Families would trek at night to avoid attacks, foraging for food or feeding on milk from their cattle, most of which died along the way.

“We slept under trees, but we weren’t attacked as we fled”, said Amina Amadou. “The cattle all died along the way.”

Souleiman Hamadou, 67, arrived in Gbiti in March after walking for two months. “The anti-balaka gunmen attacked our village. They killed my son and my cattle were dispersed. I am weak and not in good health. It’s my wife who goes to the bush to look for firewood to sell to earn some money.”

UN resident coordinator Rochdi says the escalation in numbers has made planning difficult.

“What makes it critical for us is that from January to March we received 60,000 refugees, while the planning caseload in the beginning was 45,000. So it’s very difficult for anyone and any government to provide [adequate] support for such a huge number of refugees,”

But she noted that donors were increasingly responding to the crisis. “I see more and more donors coming into the picture. It is really urgent to provide the support otherwise it [the influx] will pose a threat to the stability of Cameroon itself.”

Just 9.6 percent of $117 million sought for humanitarian response in Cameroon for 2014 has been funded, she said.