Flooding caused by the forced closure of a major dam on the Euphrates river has destroyed villages and farms across a 200sqkm area west of Baghdad, leaving tens of thousands homeless and at high risk of waterborne diseases like cholera.

Aid agencies - already stretched to the limit trying to respond to the 434,000 people displaced by fighting in the troubled province of Anbar - are now scrambling to get food, shelter and hygiene kits to the estimated 40,000 families affected by the flooding in Abu Ghraib and surrounding areas in April.

The water - which at the height of the flooding was reported to have reached just a few kilometres short of Baghdad International Airport - is now slowly receding from Abu Ghraib and some families are starting to return home. But Nuaimiyah Dam, in the city of Fallujah in Anbar province, is still believed to be under the control of militants from the Islamic State of Iraq and the Levant (ISIL), and it is feared they could cause more flooding at any time.

“The government does not yet have full control of the area or the dam,” said Eliana Nabaa, spokesperson for the UN Assistance Mission for Iraq (UNAMI). “There is no reason to relax because it [the flooding] could happen again.”

Despite these risks, however, some families, who had sought refuge on higher ground and in neighbouring governorates, are starting to return to the flood-hit areas to assess the damage and recover what is left of their homes and farms.

It is not clear how many people are still homeless because water-blocked roads and the security situation in Abu Ghraib have limited humanitarian access, but the UN estimates that at the height of the floods between 12,000 and 20,000 families were forcibly displaced.

“This is a big mess, a real tragedy. Everything is damaged, nothing is working and we have many problems,” the mayor of Abu Ghraib, Othman Adil Al Ma’dhidi, told IRIN.

“The flooding happened very suddenly in the space of a day. People were very frightened and they had to leave their homes because of all the water and it was not safe,” he added, explaining that the flooding had affected 49 villages and damaged more than 10,000 homes.

He said five people had died, some from being bitten by snakes living in the water. He appealed to the international community for help.

“It’s going to take a lot to rebuild all this, there is a lot of damage and we need help,” he said.

ISIL militants reportedly closed Nuaimiyah Dam, around 5km south of the city of Fallujah, in early April, having taken control of parts of Anbar in January when the Iraqi Security Forces (ISF) withdrew from the city. The government forces retreated because of threats against them from Sunni tribal groups, following the forced closure of an anti-government Sunni protest camp in Ramadi, Anbar’s capital.

Analysts told IRIN ISIL’s primary intention was to cut off water supplies to the south of the country, where the population is largely Shia and sympathetic to the government. However, the shutdown also triggered a surge into the Abu Ghraib irrigation channel, causing widespread flooding in an area that is mostly inhabited by Sunnis.

Eyewitnesses described to aid workers how a tide moving at 5km per hour flowed into homes and across fields, submerging schools, dragging away livestock and forcing families to escape on rafts made from pieces of furniture.

On 6 May, an opening was created downstream from Nuaimiyah Dam to allow drainage, but this has left several dozen villages with no water at all. They are now dependent on trucked supplies.

“It’s not a case of being able to open up one gate and then everything is fine,” UNAMI’s Nabaa said. “We still have a flood and the expectation that even when the flood goes down, there will be a long-term negative impact on the area and the agriculture. It was harvest time and a lot of crops have been lost.”

Mohammed Al Bahbahani, a public information officer at the World Food Programme (WFP) in the capital Baghdad, who visited Abu Ghraib earlier this month, described a scene of damaged buildings and devastated crops.

“Most of these people are farmers; they live off their land; they grow their own food and sell what’s left over to make some cash. The flooding has destroyed their livelihoods and left them without food.”

An Iraqi boy receives assistance from the World Food Program (WFP) after flooding in Abu Ghraib in April 2014, caused by militants of the Islamic State of Iraq and the Levant (ISIL) who took control of the Nuaimiyah dam. 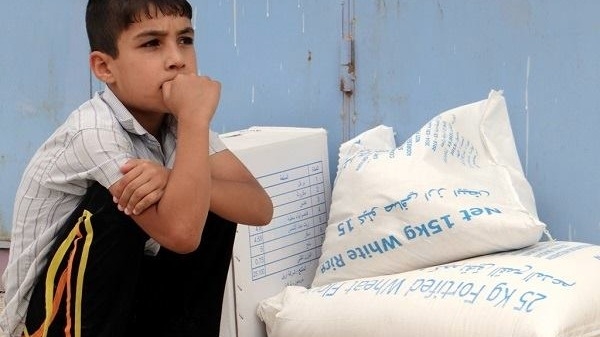 “[The displaced] are suffering from not finding water to drink and they are getting sick; some have skin rashes and others are having diarrhoea,” Mayor Al Ma’dhidi added.

Al Bahbahani said there were growing concerns about the risk of a disease outbreak due to the amount of standing water, general contamination and summer heat. However, so far, no major outbreak has been reported.

According to the UN Refugee Agency (UNHCR), a number of the families affected by the flooding were already internally displaced, having fled violence in Anbar.

“They were extremely vulnerable in the first place and now they have been displaced again,” said Natalia Prokopchuk, UNHCR external relations officer. Many of the IDPs had been camping out in poultry sheds and farm buildings and so were doubly exposed when the water came, she said.

“We are getting reports of people suffering from waterborne diseases, particularly those who were displaced from Anbar,” she added. “They don’t have money to approach health services and the health situation does not look good.”

Zach Thomas, an assistant project officer with the International Organization for Migration (IOM), told IRIN: “The water is receding but a lot of swampy areas remain and we have been told by the local councils that there is sewage mixing with agricultural water and standing water and that is causing people to get sick.

“Whole harvests of tomatoes, potatoes and okra have been lost and those people that did not lose livestock are now being forced to sell them because they need the cash for food and they have nowhere to keep them.”

UNICEF has also been trucking clean water to villages and running hygiene promotion campaigns; IOM has been delivering non-food items; and on UNHCR recently began providing cash handouts to the most vulnerable families. However, the amount of aid has not matched the number of people affected.

This flooding and displacement comes as Iraq is creaking under the strain of an upsurge in sectarian violence that has raised concerns about the country slipping back into civil war.

The rise in violence and insecurity has limited access for humanitarian workers; while the low level of funding is also threatening the capacity to respond.

In March, the UN launched an emergency appeal for US$103 million to pay for food, shelter, medical, water and sanitation supplies to support IDPs from Anbar, but so far it is only 10 percent funded. Several country teams have warned that if more money does not come, services will have to be reduced.