Activists and academics in southern Thailand are calling for improved assistance, including mental health services, for women affected by the decade-long armed conflict between government forces and Muslims seeking greater autonomy.

“There are no specific strategies for women in the deep south,” said Angkhana Neelapaijit, founder of the Justice for Peace Foundation, a human rights organization that works in Thailand’s Muslim majority southern border provinces.

The marginalized position of women and the lack of health services is leaving many women affected by the conflict with nowhere to go for support or employment when their husbands are killed. There are an estimated 3,000 widows in the region. Many are struggling with trauma.

“Often women have no voice in the south. They are supposed to stay at home and take care of the family. Nothing else,” said Neelapaijit, whose husband, a human rights lawyer, disappeared 10 years ago.

“They face all the problems alone. They cannot share with anyone else.”

According to the Internal Security Operations Command (ISOC), a military unit in charge of security in the region, at least 5,926 people have been killed over the past 10 years, both by security forces and insurgents who have been fighting for increased autonomy in Pattani, Yala, Narathiwat and Songkhla provinces. The Muslim majority provinces formed part of the independent Sultanate of Pattani before being annexed by Thailand in 1909 and the region has seen intermittent unrest ever since.

Deep South Watch, an NGO that monitors the conflict, reports 431 of the deceased have been women.

The insurgency, which flared up in 2004 after decades of low-level separatist violence, has mostly targeted government soldiers and other authorities, but victims include Buddhist civilians (a majority in the country but a minority in the region) as well as teachers, and Muslim villagers suspected of collaborating with the central government.

“Before, women hardly were the [target] of attacks. However, recently, we can also see that women are shot dead and bombed,” said Soraya Jamjuree, a professor who researches social issues related to the conflict at Prince of Songkhla University in Pattani, echoing a 6 April Human Rights Watch statement decrying recent attacks on women in southern Thailand.

Women have borne years of hardship as a result of the fighting, including increased pressure to support their families after their husbands die. Activists say limited social services leave women with few options for support or employment.

A teacher in Thailand's deep south looks to the camera. Many women have been affected by the decade-long conflict and are in need of additional social services 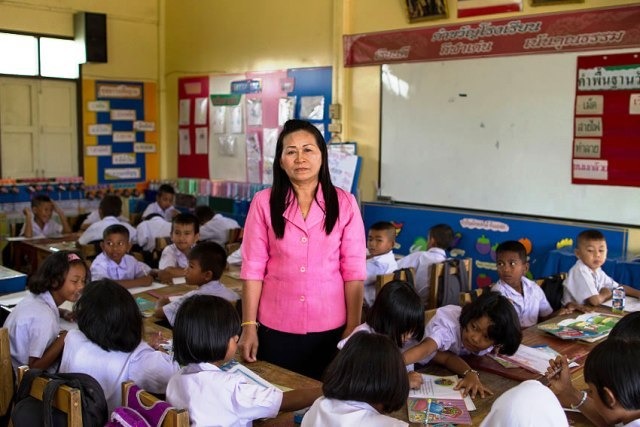 The Southern Border Provinces Administration Centre (SBPAC), a government body which monitors civilian government agencies and coordinates with security forces in Thailand’s south, explained that the main support for women whose husbands have died comes in the form of financial assistance.

"The most important support is financial. Each affected family gets [a one-time payment of] 500,000 baht [US$15,500]. For those who are injured, they are provided with medical fees," Tawee Sodsong, the head of SBPAC, told IRIN.

Families can also receive scholarships for their children and, in some cases, the government provides employment for one member of the family.

But despite the monetary assistance, women are still left struggling, and turn to each other for informal support services.

“The government is not providing enough social services to women in the deep south because they only give money, but not services on a long-term basis,” said Kanlaya Daraha, a researcher at the Prince of Songkhla University.

Sitino, a 41-year-old woman in Pattani Province, experienced mental health problems after her husband was accused of being an insurgent in 2004 and sentenced to life imprisonment. Left alone to provide for the family of six, her employment as a rubber tapper was not enough to feed all her children.

“During the first days [after my husband's arrest], I was so desperate because I had never faced any similar situation before,” she said.

“All I could expect was poverty,” she said, adding that she eventually sought support from a local women’s organization called Friends of Victimized Families (FVF).

FVF is a network of 30 female volunteers that patches together ad hoc social services for women so they can help each other. This can include providing additional money, job training, or psychosocial counselling.

Khanmueng Chamnankit, 48, whose husband and son were detained for two months without charges, assisted Sitino in overcoming her trauma.

“We cannot get any specialized assistance [for mental health] here in the south. So we just help each other, talking and sharing,” she said.

The government and the Barisan Revolusi Nasional-Coordinate (BRN-C), one of the main separatist groups in the region, began peace talks in February 2013 mediated by Malaysia, but negotiations soon stalled. The two sides have held talks on three occasions. However, a fourth round has yet to be scheduled.