The conflict in South Sudan is taking a heavy toll on children who are being killed or injured in attacks and recruited into armed groups. They are also witnessing traumatic events and missing out on school. For the youngest malnutrition is an ever-present threat.

On 17 April, dozens of armed rebel youth attacked the UN Mission in South Sudan base in Bor, Jonglei State, where they indiscriminately shot at those seeking refuge there, leaving 58 dead and over 100 injured. Some of those killed and injured were children.

Condemning the attack, Leila Zerrougui, special representative of the UN Secretary-General for children and armed conflict, in a statement said “children continue to be victims of the recent conflict in South Sudan and this must stop.”

“These attacks and violations not only leave a permanent scar on these children, but they also affect their overall sense of safety and security, especially when places that they go to in desperation, and are designated as safe places of shelter, also become places of attacks,” Zerrougui added,  also condemning the involvement of children as fighters.


“Many children and their families [in most cases the father is absent] live in dire conditions in displacement centres, under trees and in makeshift tents with limited access to food and nutrition, water and sanitation, protection and education,” Betty Gorle, Plan International’s emergency response, advocacy and communications coordinator, told IRIN.

Children are relying on UN World Food Programme food rations and begging from host communities, added Gorle, noting that “some have also spent many nights hungry or collecting wild fruits.”  According to the UN Children’s Fund (UNICEF) “dangerous levels of malnutrition threaten a quarter of a million children in South Sudan, and unless they are reached with treatment, up to 50,000 children under age five could die.”

Many children are also traumatized. “The children have also witnessed or experienced traumatizing events and as result some of the children report having sleepless nights. Many have lost their loved ones in the war,” added Gorle.

“Dangerous levels of malnutrition threaten a quarter of a million children in South Sudan, and unless they are reached with treatment, up to 50,000 children under age five could die.”

IRIN recently drew attention to the link between trauma and malnutrition in the Central African Republic.

Plan estimates that about 400,000 children are displaced. “But the situation is getting worse with recent fighting in Bentiu [Unity State]… Agencies, including Plan, speculate an increase in the number of displaced children, orphans and separated children,” added Gorle.

On 14-15 April targeted violence in Bentiu Town left hundreds dead and also forced many people to flee to the UN base outside the town. “Just a few days ago we had 4,000 people here, now we are at over 22,000 civilians,” said Toby Lanzer, the humanitarian coordinator in South Sudan, in a UN Office for the Coordination of Humanitarian Affairs (OCHA) video highlighting the situation in Bentiu.

OCHA estimates that at least 916,900 have been internally displaced by violence in South Sudan since conflict erupted there in mid-December 2013 following a political dispute between President Salva Kiir and his former deputy Riek Machar. While the fighting initially began in the capital, Juba, conflict has gradually spread throughout the country with the northern and central regions being caught up in recent clashes. Thousands of South Sudanese have crossed the borders into neighbouring countries.


Alan Paul, the country director of Save the Children in South Sudan, emphasized the need for psychosocial support for children and youth who have experienced conflict, violence and displacement. 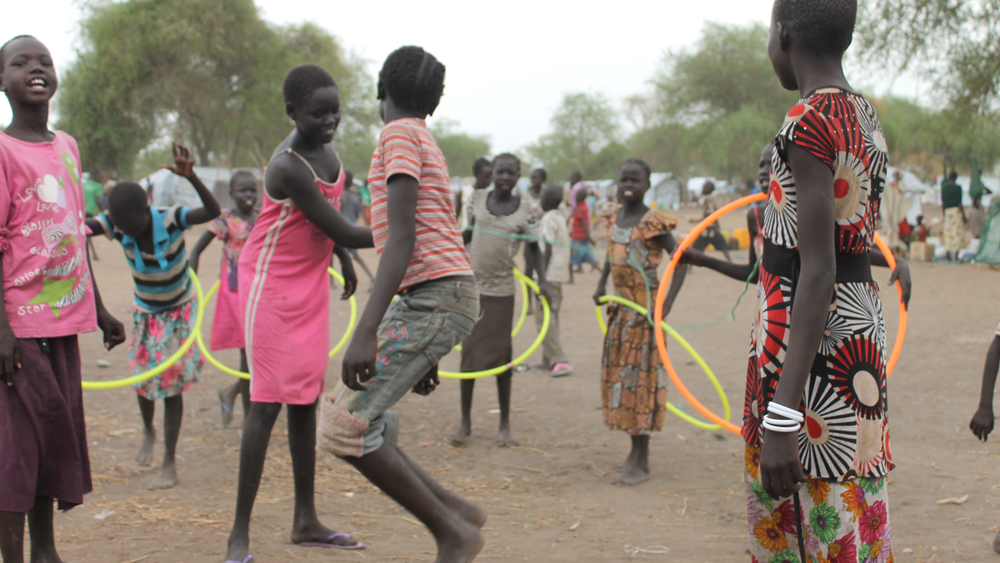 Child friendly spaces “support the resilience and well-being of children and young people through community organized, structured activities conducted in a safe, child friendly, and stimulating environment,” according to UNICEF.

“There are many children who display behavioural problems and severe emotional distress due to the experiences they have had during the crisis. There are limited services available throughout the country for children and parents with more severe PSS [psychosocial support] needs, and much more needs to be offered,” added Paul.

Many children have also been separated from their families. “Many families have now travelled long distances and some have crossed state and international borders,” he noted.

“As the rainy season begins we expect to see another large population movement that will make tracing and reunification of children already separated a huge challenge, and may cause further separations as communities decide to move to different locations to escape flooding.” According to OCHA, IDPs are moving back and forth from Bor, Jonglei State, to Mingkaman, Lakes State.

“This conflict has affected education, with many children and teachers moving to new locations and others having left the country. There are now children crowding in the few classes available with no teachers,” explained Plan’s Gorle. In Awerial County, Lakes State, for example, one temporary learning space meant for 50 pupils is currently accommodating over 200.

Save the Children is also working in Awerial and in Jonglei State to improve the psychosocial well-being of children. “Currently cases of children with more severe needs are referred to partners on the ground offering services where these are available. However, services are very limited and access is restricted to many of the most affected areas, which are by definition the areas where the population is most in need of support,” said Paul.

He recommended the integration of child protection into all humanitarian services. “It is vital that all humanitarian actors identify and respond to the needs of unaccompanied and separated children in all humanitarian interventions (e.g. ensuring adequate food rations and shelter/NFI [non-food item] materials are given, and ensuring access to clean water and sanitation services).”