Read about what we achieved.
KABUL

Last year, Afghanistan’s Ghor Province lost thousands of its inhabitants. Many fled due to conflict, but others fled due to a more subtle threat: drought.

An estimated three-quarters of the population was affected when rain-fed crop harvests were destroyed due to the dry spell (and flash floods) that hit during the planting season, according to the Afghanistan National Disaster Management Authority (ANDMA).

The drought displaced 923 families from Ghor in the second half of last year, in addition to thousands more displaced from or within the province by conflict, according to the UN Office for the Coordination of Humanitarian Affairs (OCHA). Each aid agency measures statistics differently: as such both ANDMA and the UN Refugee Agency have different figures.

The UN has ranked Ghor as the province with the fifth highest humanitarian needs, one of the provinces worst affected by acute food insecurity. At the end of 2013, it was ranked at the “phase 4” emergency level, according to the Integrated Food Security Phase Classification (IPC), one classification before famine.

Water levels in Ghor’s wells, springs and canals decreased by 60 percent due to the drought, greatly affecting the population’s access to drinking water. In addition, locust and mice infestation destroyed cultivation land in several districts, causing an outbreak of disease among the people and livestock.

According to Afghanaid, more than 80 percent of Ghor’s residents rely on agriculture and livestock (animal husbandry) for survival.

"The land relies on rain," Abdul Rahman Tariq, Afghanaid's director of programmes, told IRIN. "If people have enough water to irrigate their fields, then there would be no problem, but, as we have seen, if there is less rain, the people will face big problems when it comes to irrigating their land and fields."

Despite concerns earlier this year of another drought in 2014, Mohammad Sayed Qazi, director of international relations at ANDMA, said this year’s prognosis looks good. While the province did not get a lot of snow, rainfall has been consistent.

However, of the country’s 34 provinces, Ghor has been one of the most severely affected by consecutive droughts over the past few decades, creating “alarming food shortage” and displacement.

The UN had warned earlier this year that displacement from rural areas would continue after the winter season, unless wheat seeds and food are distributed to those affected by the 2013 dry spell.

But over the last five months, the Afghan government, UN and other humanitarian agencies have assisted IDPs from this most recent displacement with food and non-food items such as blankets, tents, cooking oil and rice.

Nearly 8,650 tons of wheat grain has been distributed. Emergency rations have reached 66,132 families, according to ANDMA.

However, displaced people say finding a job or livelihood opportunities is the main challenge - an indicator that the families could continue to be aid dependent for years to come.

Humanitarians agree that only long-term, sustainable solutions can mitigate the province's ongoing struggle with drought and flooding.

One viable long-term response humanitarians mention is water management projects on one of Ghor's three main rivers, such as the Hari Rud river.

However, immense government support and funding would be needed, said ANDMA’s Qazi.

“Weak coordination between the Afghan government and international organizations and the lack of good management and professionalism have contributed to the absence of any sustainable water projects in Ghor so far,” he told IRIN.

“What Ghor needs is water plants, power… The potential to create power using our water resources is great. It is shameful we have to import power from neighboring countries. When they suffer from a natural disaster then Afghanistan has no power.”

Weak coordination between the Afghan government and international organizations and the lack of good management and professionalism have contributed to the absence of any sustainable water projects in Ghor so far.

Instead, aid workers have turned to small-scale projects, which they admit cannot solve all the community's problems, but have had some positive impact.

Potatoes are a main commodity in Ghor, with roughly 80 percent of farming families dependent on the staple for food and income. In two of Ghor’s key IDP-producing districts, Catholic Relief Services (CRS) implemented a two-year Disaster Risk Reduction (DRR) project focusing on the crop.

Traditionally, to store their potatoes, farmers dug holes in the ground, loosely stacked the potatoes, and then covered them in dirt. According to CRS, these poorly ventilated potato pits incurred losses of around 40 percent.

Using low cost material such as pipes and wood, CRS added ventilation ducts to the traditional pits, allowing air to flow more freely, thus preventing mould and spoiled potatoes. Beneficiary farmers constructed 13 modified demonstration pits in different villages. Communities were then shown other local materials available to them when replicating their own pit.

According to CRS assessments, the farmers greatly reduced winter losses; increased harvest due to the distribution of improved seeds and produced enough yield to feed their families. Half reported excess crop, which they in turn sold in the local market.

As families replicated the technology, Celeste Gregory, CRS's head of office in Ghor, told IRIN via email that they were able to salvage material for the construction of the ventilation ducts in their house and from their communities, reducing total input costs to around US$5-10.

"The project has been unique in the way that it combines all of the core elements of successful and sustainable community development, namely that it builds on existing knowledge/practices at the community level, provides technical expertise to address real needs as identified by community members themselves, and can be easily replicated, even by poor farming families, after the project has come to a close because it does not rely on expensive inputs," said Gregory.

Weak coordination between the Afghan government and international organizations and the lack of good management and professionalism have contributed to the absence of any sustainable water projects in Ghor so far.
Yet, while local farmers continue to use the improved storage pit to store their potatoes and the vast majority have adopted new behaviours promoted by the project, during last year's drought in Ghor, some villages lost as much as 90 percent of their potato crop, without enough potatoes to stock for the winter months, even in the 13 community demonstration pits constructed.

Of the 126 replicated improved storage pits, 62 are empty due to the poor harvest, CRS told IRIN. Of the 13 villages in the project, 11 saw production losses of 50 percent or more.

Produce waiting to be exported to Pakistan in Jalalabad City's main vegetable market in Afghanistan. (May 2012) 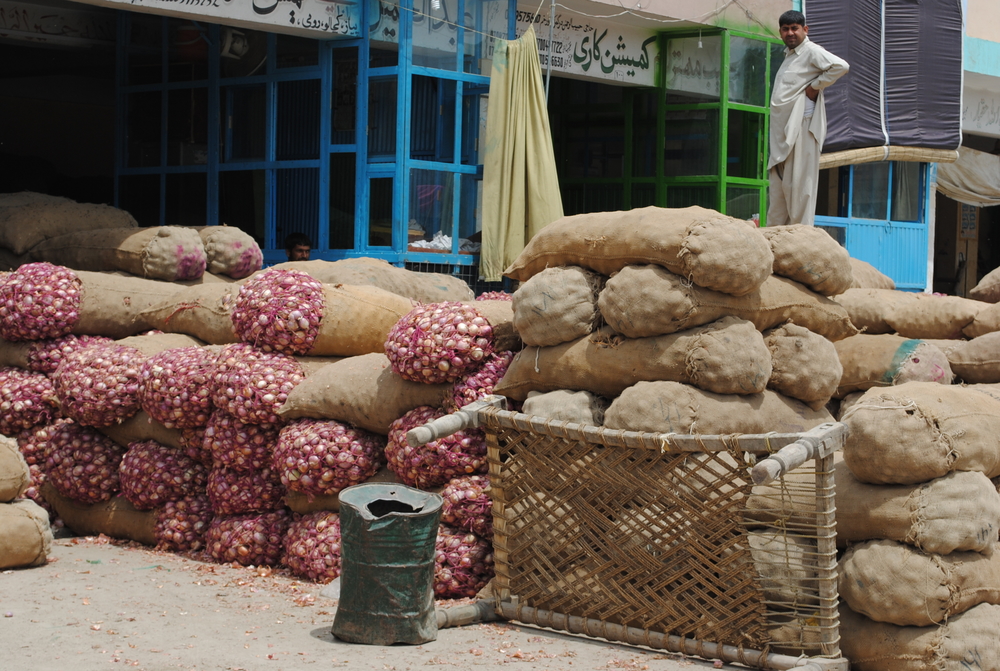 Still, farmers learned a technique that they can replicate on their farms - improving their production and storage in the future.

The project also consisted of distributing improved wheat and potato seeds, vegetables, and vaccines for the livestock.

The results were similar to the CRS project: beneficiaries saw an increase in both wheat and potato yield due to improved seeds and trainings. Tariq, of Afghanaid, attributes the project's success to the initial needs assessment done in the community and the participation of both men and women in the project.

"We did an assessment in the whole district [of Lal Wa Sarjangal] and identified more than 30 villages prone to drought and floods," Tariq told IRIN. "Then the communities themselves had a lot of discussion about what they needed. Community participation, community engagement and real assessments of the needs of the people are key to the success of a project."

Despite these short-term, small-scale successes, the key to combating drought is long term sustainable development.

Some aid workers say that as international organizations cut back and more decision-making roles are in the hands of Afghan agencies, long-term sustainable projects can hopefully come into focus.

However, they stress that the lack of basic resources is a major hindrance, and that there is growing concern over climate change, as well as a dire need for continuing aid across the country.