Health officials say more work is needed to fight HIV/AIDS in Laos, which has an over-reliance on foreign donors and lack of government support, as well as limited treatment coverage and a widespread gap of awareness and testing.

“Even though HIV prevalence is low in [Laos, at 0.3 percent], we still need to keep efforts up to ensure all people in need of HIV services can access them and that no one is left behind. HIV is a reality in Laos and our progress on HIV will lead to progress on broader health and development issues,” Marlyn Borromeo, regional advisor and Laos focal point for the Joint UN Programme on HIV/AIDS (UNAIDS), told IRIN.

“It’s very crucial for the government to strategize how they will address the needs of its citizens who have HIV and need treatment,” said Omar Syarif, programme manager of the Asia Pacific Network of People Living with HIV/AIDS.

According to a 2013 UN and government report, 54 percent of eligible patients were on life-prolonging antiretroviral (ARV) treatment, well below the Millennium Development Goal target of at least 90 percent by 2015, but above the regional average of 46 percent.

Only 23 percent of women and 30 percent of men aged 15 to 49 had comprehensive knowledge of HIV, including prevention and transmission of the disease, the report said.

“I would think that the main challenge is for individuals to know that they are infected,” Dominique Ricard, a World Health Organization (WHO) medical officer closely involved in the national AIDS response, told IRIN. “However, if unabated, the number of people with HIV will continue to increase.”

New HIV infections in Laos have steadily climbed to about 1,000 cases each year, with an estimated 12,000 people living with HIV in 2013, according to UNAIDS. In 2000, there were only 162 cases of new HIV infections.

Officials blame scant reporting and identification, and insufficient demand for assistance. “People come for treatment only when they are sick, as they are not accustomed to testing,” the report said. 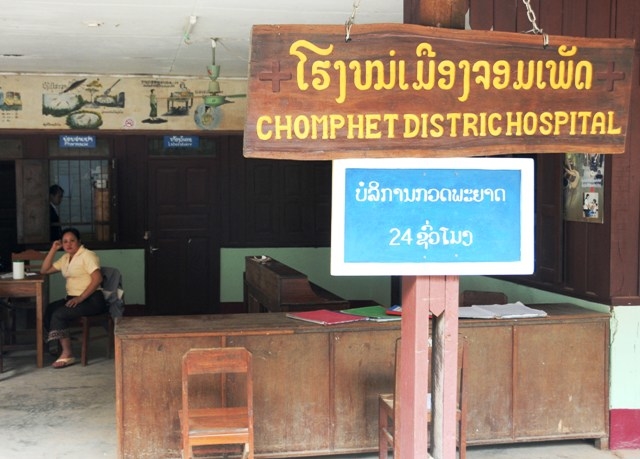 In 2012, UNAIDS and government officials reported that any scale-up to the national AIDS response would require “a paradigm shift towards integrating HIV management into the public health system” such as decentralizing services to local levels.

Since 2006, the number of ARV treatment centres has grown from two to eight across the country - along with five support offices to give peer counselling to patients, but campaigners say more facilities and human resources are needed to assist infected people in mountainous rural areas where almost 70 percent of the population lives.

Laos currently relies heavily on support from foreign donors who in 2011 were responsible for 93 percent of the country’s AIDS budget, says the report.

The Global Fund  provides free ARV drugs (about US$650 per person each year) but collateral costs such as treatment for opportunistic diseases are not always covered, experts say.

The National Committee for the Control of AIDS warned that the dependency on external funding is “a challenge for sustainability” - especially as The Global Fund is not fully predictable and its five-year $32 million grant or HIV/AIDS services in Laos will expire at the end of 2015.

Now is the time for the government to step up its own efforts, campaigners say.

“We never know how long this international funding mechanism will last,” said Syarif.

In Laos, heterosexual intercourse is the primary mode of transmission at 88 percent, with numerous Lao husbands passing the deadly virus onto their wives, experts say.

There are also obstacles to treating hidden and stigmatized at-risk groups, particularly men who have sex with men (MSM) which have the highest HIV prevalence at 2.4 percent, twice as high as female commercial sex workers.