The UN mission in Democratic Republic of Congo (DRC) plans to send more troops to the southern province of Katanga, its top official has told IRIN, to respond to the humanitarian crisis unfolding there, even as peacekeepers continue to combat elusive groups along the borders with Uganda and Rwanda.

DRC officials and civil society groups have been calling for the UN to intervene more strongly in Katanga, where armed groups calling for the province to secede have torched scores of villages and clashed with government forces. As many as 400,000 people have fled their homes.

Stabilizing mineral-rich Katanga is critical to DRC because of the province’s vast natural resources: revenue from the mining and export of Katanga’s minerals, such as copper and coltan, account for the bulk of the national budget. Its importance makes any outside interference in Katanga politically sensitive.

UN chief Martin Kobler said commanders of the mission’s peacekeeping force (MONUSCO) were discussing how to add to the 450 soldiers from Benin currently stationed in Katanga. He said the extra troops would allow MONUSCO to escort convoys delivering humanitarian aid.

“I am of the firm opinion that we have to increase our military presence there to give hope to the people and, wherever possible, to prevent these things like burning villages,” Kobler told IRIN in a telephone interview on 10 February. “This will happen because it is really imperative that we are there.”

But he cautioned that they could not prevent all violence, and he said it was up to the DRC government to end the rebellion, including by addressing social grievances about underdevelopment and the struggle between Katanga and central authorities over how to share the province’s wealth.

The crisis in Katanga comes at an unwelcome moment for the UN mission. The UN is pressing the government and international donors to urgently develop a plan to demobilize fighters from the defeated M23 movement, just as MONUSCO and the Congolese army (FARDC) tackle two more rebel movements in the east.

Many motives for violence

Since October, small militia bands armed with AK-47s and bows and arrows have burned scores of villages in an impoverished area of central Katanga dubbed the “Triangle of Death.” It is the latest and most deadly phase in a two-year uprising.

According to a recently released report by a group of experts appointed by the UN Security Council, the violence in the triangle is the work of Kata Katanga (Swahili for “cut off Katanga”), a loosely aligned network of secessionist groups. The report identified Kata Katanga’s military commander as Kyungu Mutanga, a rebel leader better known as Gedeon, who escaped from prison in 2011. He had been sentenced to death for terrorizing civilians in the same region in 2009.

“People focus too much on the east of Congo, and they forget about Katanga. We need this [MONUSCO] intervention to come… They can finish off these small groups in two months.”

Around the towns of Manono, Mitwaba and Pweto - the three points of the notorious triangle - the violence has followed a grimly familiar course. Residents and rights groups tell of killings and torture by the rebels and of extortion and abuse at the hands of FARDC soldiers. As in the previous cycle of violence, rebels are torching villages and allegedly forcing children to join their ranks.

Officials and relief workers in the region said that, in some areas, the violence had become entwined with local political feuds and efforts to control lucrative mining operations; many traditional leaders have been killed or have fled. The tensions have also led to deadly clashes between Bantu and Pygmy communities.

Katanga’s governor, Moise Katumbi, had called for MONUSCO to do more than enable humanitarian assistance.

“People focus too much on the east of Congo, and they forget about Katanga,” Katumbi said in an interview with IRIN in late January. “We need this [MONUSCO] intervention to come…  They can finish off these small groups in two months.”

Human rights group Justicia also urged MONUSCO to step in. In an open letter to Kobler and DRC President Joseph Kabila, it pointed out that militants had even begun to threaten Lubumbashi, the provincial capital and main hub for foreign firms involved in DRC’s mining industry.

Last March, Lubumbashi residents were shocked to see a column of some 300 Kata Katanga members walk unhindered into the city. Security forces opened fire after the marchers hauled down the DRC flag in a downtown square and replaced it with that of the short-lived Katangan state, which was declared after Congolese independence in 1960. Scores were reportedly killed or injured.

The city was shaken again in December, when troops reportedly clashed with followers of Paul Joseph Mukungubila, a failed presidential candidate and fierce critic of Kabila, shortly after similar battles in Kinshasa prompted talk of an attempted coup.

Kobler said MONUSCO was looking at deploying more troops in several locations, including Pweto and the northern town of Kalemie. He provided no figures or timeline but said the force would not be able to prevent the kind of hit-and-run raids that have plagued the remote “triangle”.

The FARDC had only one battalion in the area, he added: “By far not enough.”

Moreover, he said it was up to Congolese leaders to solve the “political problems” surrounding the rebellion. He alluded to allegations that some provincial and national leaders have secretly supported the militants as part of a power struggle among the country’s political elite.

Demobilized Kata Katanga fighters at a dilapidated holding centre in the DRC town of Manono. 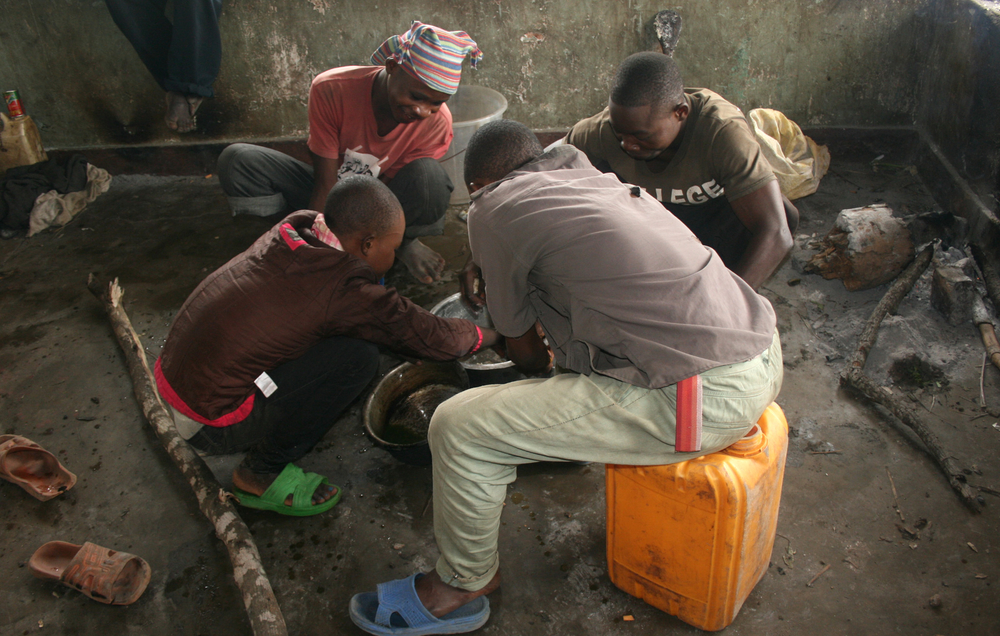 The December incidents followed the appointment of a new national police chief whose ousted predecessor, John Numbi, had been a powerful member of Kabila’s inner circle. Numbi had been suspended since 2010 over the death of a prominent human rights activist.

The UN experts’ report accused Numbi of providing arms to Kata Katanga and allowing militants to use his farm outside Lubumbashi as a base for operations, including the March procession into the city. Numbi has denied any links to Kata Katanga or Mukungubila. Army troops raided Numbi’s farm in January, reportedly detaining several suspects.

Kobler sidestepped questions about the political manoeuvring, but said tackling issues of poverty and the uneven distribution of wealth in the province, as well as improving relations between Lubumbashi and Kinshasa, would undercut the rebellion. Provincial leaders are pressing the central government to let Katanga retain 40 percent of the national revenue generated in the province, as laid down in the constitution.

No solution in sight

In the shorter-term, authorities have tried to deflate Kata Katanga by wooing away fighters with demobilization packages or promises of integration into DRC security forces. In November, a senior rebel commander surrendered, along with 400 of his supporters. Since then, several hundred more have reportedly turned themselves in. However, the violence has only accelerated.

Katumbi, the Katanga governor, said rebel leaders including Gedeon should be charged before the International Criminal Court for offences including the recruitment of child soldiers to break the cyclical violence afflicting DRC.

Others felt the priority was to persuade Kata Katanga to give up the fight.

“First we have to re-establish peace. Later, maybe we can try to work out who did what and who should face justice,” said Francis Kazembe, the administrator of Manono and its surrounding territory.

The government has indicated that it will take a hard line against the holdouts, raising the prospect of an eventual military offensive. Local officials and aid workers worry that the army will struggle to separate rebels from civilians, and that many innocents could die. There is, in any case, little conviction that a solution is in sight.

While rebel leaders claim to be pursuing lofty political goals, former foot-soldiers argue that addressing poverty in a region that has never recovered from DRC’s past wars would go a long way to preventing any resurgence of militancy.

“There are no schools, no jobs, not enough to eat. That is why we rose up,” said Jean Muzela, a 42-year-old awaiting demobilization at a bleak makeshift holding centre in Manono. “The government needs to understand that.”