Where children once played with beads and bicycle wheels, now stand only the shells of their homes: blackened wooden beams, cooking pots melted by fire, and mud blocks from the tumbled walls softening in the rain.

Village after village in this remote region of the Democratic Republic of Congo (DRC) has been razed to the ground since October 2013 by armed groups calling for the resource-rich province of Katanga to secede and become an independent state. These groups, as well as political affiliates operate under the collective name of Mai Mai Kata Katanga.

The “scorched earth” campaign by the rebels and clashes with security forces have displaced up to 400,000 people from what has been dubbed the “Triangle of Death.” An unknown number of people have been killed or wounded, and top UN official for DRC last week called the situation a “humanitarian disaster.”

Many of those displaced have found refuge with relatives or other host families in the towns of Manono, Mitwaba or Pweto - the three points of the triangle - or have re-settled elsewhere. Some have been able to return to their homesteads to rebuild. But the poorest have been driven into the bush or to villages at risk of further attacks.

The affected communities are vulnerable even by the standards of impoverished DRC, which ranks last in the UN’s Human Development Index. Rural Katanga benefits little from the wealth generated by vast mining operations further to the south. According to the World Food Program (WFP), surveys in Mitwaba and Manono last year indicated acute malnutrition rates of 16 percent and 20 percent, respectively, and the figures have likely worsened.

Rebels armed with assault rifles, axes, and bows and arrows stormed villages, screaming at the inhabitants to run for their lives, and setting fire to the thatched roofs of their homes

Violence has surged in the area following the 2011 jailbreak of a Mai Mai leader who had haunted the region before his detention in 2007. Hopes for peace rose last year when hundreds of fighters surrendered to the army, but the remaining rebels have responded with the scorched earth policy, which shows no sign of abating.

Survivors told IRIN of small rebel bands armed with assault rifles, axes, and bows and arrows storming their villages, screaming at the inhabitants to run for their lives, and setting fire to the thatched roofs of their homes. While civilians have been mostly spared, rebels have hunted down village leaders and engaged in gun battles with soldiers sent to combat them.


Kabemba Mushini, a 37-year-old mother of 10 waiting in a crowd for food rations in Kikomo, 40km east of Mitwaba, told IRIN in late January that her village was attacked in broad daylight two months earlier.

“We were surprised to hear shooting from beyond the bridge. When we looked out, we could see smoke already rising from the houses there,” said Mushini, as she comforted her coughing 11-year-old daughter. “I just had time to get the children together and run. I thought we would all be killed.”

They fled to fields where Mushini’s husband was working. After sleeping in the open, the family crept back to the village to find all their possessions either missing or consumed by the flames.

Mushini said she salvaged a half-melted cooking pot, and the family slept in the field for four more days before trudging to Kikomo. They moved into the house of relatives who had already fled further away.

While the couple found some work labouring the fields for about US$1.50 a day, the family lacked everything, from blankets to cooking implements. She said she had no soap to wash herself or her one set of faded clothes.

Mushini said the family lived in fear and had not bothered to enrol their children in school because of the possibility they would have to flee again. “The future seems bleak. We feel paralyzed, as if our lives had stopped.”

The week after her interview with IRIN, Kikomo, too, was razed. 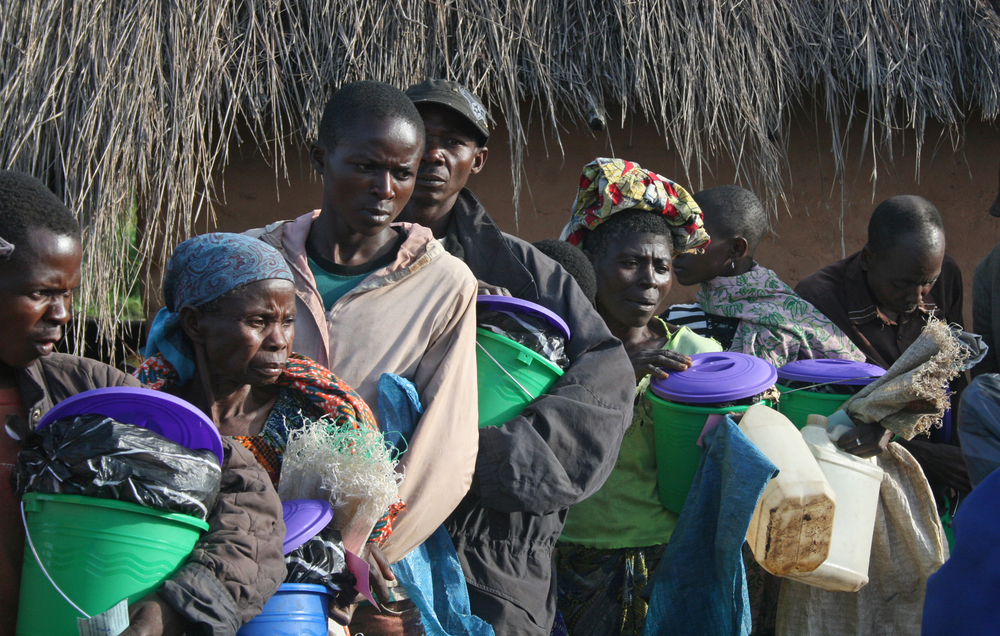 The current wave of violence comes at the start of the wet season, worsening conditions for the displaced. Having lost most of their livestock and harvest, many are surviving on little more than manioc roots.

WFP said it was concerned that the proportion of pregnant and breast-feeding mothers as well as children suffering from malnutrition must have risen, bringing in its wake other health problems. A cholera epidemic has been raging in several parts of Katanga, including Pweto, where many internally displaced persons (IDPs) have found refuge.

IRIN encountered Mulopa Mwambala, a 35-year-old farmer, leading his wife and six children southwards out of the triangle after nearly three months in the bush. One daughter carried a tiny woven basket filled with insects - a precious protein supplement.

“We are tired of being in the bush, and, anyway, the army told us we had to clear out,” Mwambala said, pushing a bicycle sent by his brother to help evacuate the family. “We have been driven this way and that and have suffered too much.”

Like many others, Mwambala’s children had been out of school for months.


Médecins Sans Frontières (MSF), the only international relief group still operating inside the triangle, said civilians were increasingly unable or unwilling, for reasons of security, to seek medical care at its hospital or clinics in the area. In addition, malnourishment was making them more vulnerable to infections.

Thomas Mollet, head of mission for MSF Holland in Katanga, said mortality rates at the organization’s hospital in Shamwana had more than tripled. “When we do see patients, they arrive very late,” Mollet said. “A lot of children are dying from malaria.”

He said many women and infants were also dying during unattended childbirths in the bush.

We have come to Mitwaba because the army is here, and it is secure. But they keep on abusing people because they are not properly led or supplied

In one grim example, Mollet said a woman arrived alone and on foot at the hospital after her child had died during delivery. The woman’s contractions had weakened with only her baby’s head outside her body, asphyxiating the infant.

The woman had staggered through the bush for five days, covering 80km, in search of help. Suffering from septic shock and blood loss, she needed emergency surgery to remove the child and stop the bleeding.

“She will never have more children, but she survived,” Mollet said.

Normally, the woman would have alerted a nearby rural health clinic, which would have told MSF to scramble a bush ambulance to collect her, but the government-run clinic had closed because of the conflict.

Host families are also feeling the strain. According to Mbowa Kalenga Wakumbo, a government official in Mitwaba, many IDPs have found refuge with strangers following a tradition of “African hospitality”. “But sometimes there are 20 people sleeping in their house. This has consequences for their own health and many other things,” including putting pressure on schools.

Villagers and aid workers also tell of beatings and extortion at the hands of government troops - pressure that the UN Office for the Coordination of Humanitarian Affairs said had caused some of the displacement.

“We have come to Mitwaba because the army is here, and it is secure,” said Etienne Kubunge, a 50-year-old farmer who had been driven into the bush two times by Mai-Mai attacks. “But they keep on abusing people because they are not properly led or supplied.”

Wakumbo said he was worried about the relatives of Mai-Mai fighters who had followed them into the bush. In addition to suffering from the tough conditions, those people risk being used as human shields in the case of an army offensive, he said.

Waiting for life to re-start


There is also misery for those who have given up the fight.

While the authorities transferred most of the about 400 Mai-Mai fighters who surrendered last year to the provincial capital Lubumbashi or elsewhere in DRC to await demobilization, scores remained at a derelict former army training facility on the edge of Manono.

In the concrete-floored building, where the roof leaks and doors do not close, the rations are meagre and the mood bleak. The men’s wives and children are lodged in a large tent to one side.

Jean Muzela, a 42-year-old from Mundela Village, said poverty was what drove most of the Mai-Mai fighters to rebel. Having turned themselves in, he said officials had promised to give them money to help them go home and re-start their lives.

“We’re not seeing any change,” Muzela said. “We sleep on the floor. We eat poorly. We have no clothes. We thought we would see some change, but we are in the same situation.”