University graduates in northern Sri Lanka, which is recovering from decades of civil war, are looking at a sparse employment landscape with few opportunities on offer, say officials.

“Those from the north face a much more difficult time than those from elsewhere in the country. New jobs are very difficult to find,” Rupavathi Keetheswaran, the government agent for the northern Kilinochchi District, the top public official in the area, told IRIN.

The Sri Lankan Census and Statistics Department notes that national unemployment amongst graduates stood at 10 percent in 2013, but education officials put the figure in the north significantly higher. The island nation has a population of 20 million.

“We don’t have the data, but given the number of inquiries we get from unemployed graduates, it’s much higher,” said Sivalingam Sathyaseelan, secretary for the ministry of education of the Northern Provincial Council.

The primary reasons are an acute lack of jobs in the region, as well as a lack of the English language and information technology (IT) skills that are in demand in the private sector, he said.

The government promised it would create more job opportunities in the north after the war ended in May 2009 and its forces declared victory over the Liberation Tigers of Tamil Eelam (LTTE), who had been fighting for an independent Tamil homeland in northern Sri Lanka since 1983.

In a 2012 household survey of recent returnees to the north, undertaken by the UN Refugee Agency (UNHCR), 55 percent of the 917 respondents said their main source of income was infrequent or casual work, and just 9 percent said they had a permanent job. Researchers found that 43 percent of participants reported having a monthly income of Rs5,000 ($38) or less, against a national average of Rs36,451 ($280) per month.

The current unemployment figure for the country stands at 4 percent, according to the official statistics. In the Northern Province there are no official figures for three of the five districts - Jaffna, Mullaithivu and Vavuniya - that make up the province. In the two districts where data are available, unemployment rates are more than twice the national average, reaching 8.1 percent in Mannar District and 9.3 percent in Kilinochchi.

However, some believe the real scale of the problem is much worse. Dr Muttukrishna Sarvananthan, a development economist and principal researcher at the Point Pedro Institute for Development, said the government had used a low threshold to calculate unemployment rates, had included those as young as 10 years old in the labour force, and had counted people who worked for as little as one hour a week as being employed.

If more stringent parameters were used, like raising the eligibility age to 15, the national rate of unemployment could be as high as 18 percent, with a “staggering 32.8 percent unemployment rate” in the Northern Province. “The aspirations of the youths do not match with the opportunities available,” Sarvananthan noted.

A group of university students at a science fair in Colombo 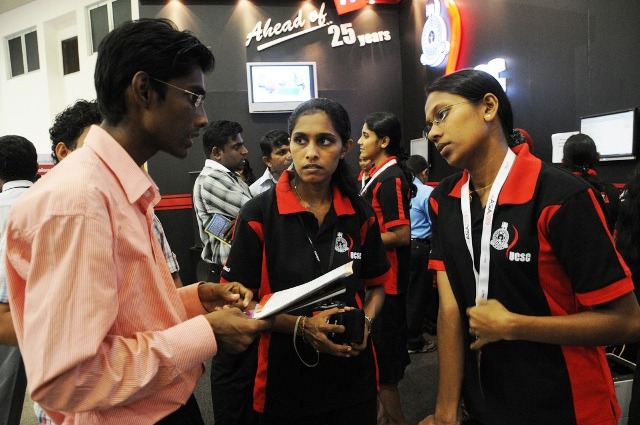 More than 16,600 students in the province participated in the exams, of which 63.8 percent achieved the minimum requirement for entry into one of the country’s 15 universities, against a national average of around 40 percent, the University Grants Commission of Sri Lanka reported.

But this brings little comfort to those in the north who have graduated and are now seeking work. “There are no management jobs in Kilinochchi. Whatever few management jobs there are, are taken those from outside districts,” said Vishva, 24, a Tamil man who graduated with honours from Jaffna University in the north in 2013 and now lives in Kilinochchi.

So far he has applied for over two dozen jobs, but now says he may apply for a position as a teacher to improve his chances of finding work or leave the area altogether. Education official Sathyaseelan said many graduates have left the region.

The massive investments in infrastructure since the end of the war - estimated at over US$3 billion by the Central Bank of Sri Lanka - have yet to generate jobs for those with university degrees, said economist Sarvananthan. At least 40 percent of the northern economy relies on the fishing and agriculture sectors to generate income.