The welfare of 117 young Tharu girls at the government’s Lawajuni Girls’ Hostel in the remote Narti village of Dang District, nearly 600km southwest of the Nepalese capital, Kathmandu, is the responsibility of hostel warden Brija Chaudhary, 25. They are all former ‘Kamalaris’, rescued from the system of bonded labour still applied in many middle- and high-class households.

“They have a history of traumatic experience due to their exploitation from an early age,” said Chaudhary, of the Nepal Youth Foundation (NYF), an NGO working to support such girls.

The ex-Kamalaris are usually girls and teenagers from the Tharu community, one of Nepal’s most marginalized indigenous groups. The majority come from five districts - Dang, Bardiya, Banke, Kanchanpur and Kailali - in Nepal’s Midwest and Far west regions.

Officially abolished by the government in July 2013, the Kamalari system was an extreme form of child labour, abuse and exploitation by the owners, who promised to put them in good schools in exchange for their free labour, according to the Freed Kamaiya Development Forum (FKDF), a local NGO in Dang.

“We all ended up being exploited, abused and unable to complete school… [because of] working 17 hours a day,” said Manjita Chaudhary, FKDF’s president and a former Kamalari. Many people in the Tharu ethnic group have the surname of Chaudhary.

Over the last decade, 12,000 Tharu girls and women - ranging in age from 12 to 25 years - have been rescued by various activist groups. According to NYF and FKDF there are still 500 in servitude and it is hoped that they will be rescued soon, once their whereabouts are confirmed.

But rescuing girls and reuniting them with their families is not the solution, and they should rather be empowered through free education and technical training. “They are determined to overcome their trauma by working hard to stand on their own feet today,” Chettri said in the southern city of Nepalganj, nearly 600km southwest of the capital.

A group of former Kamlari girls, or indentured female servants, now studying engineering in Nepal. The practice of Kamlari, a traditional system of bonded labour in southern Nepal, was officially abolished in July 2013 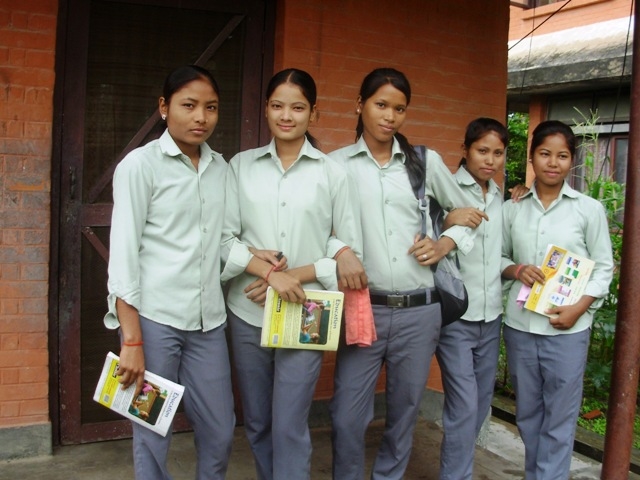 According to FKDF, some 8,000 girls are studying in 1,100 secondary and high schools, 36 are attending bachelor degree courses, and about 2,000 who dropped out earlier are now taking vocational training in agricultural farming technology, nursing, engineering and garment manufacturing.

The government has been criticized by activists and ex-Kamalari girls for not adequately providing support for their welfare. FKDF says the government provides very little money for scholarships - barely $100 for postgraduate studies, $60 for higher secondary school (grades 11 to 12) and $20 per year for secondary education (grades 7 to 10).

Upendra Adhikary, a spokesperson for Nepal’s Ministry of Women, Children and Social Welfare, said, “We have allocated 3 million rupees (approximately US$30,000) this year.” But activists and ex-Kamalaris said the amount is barely enough to help the empowerment efforts.

In all five districts, ex-Kamalaris have started cooperatives to help provide low-interest loans for income generation. Today there are 32 cooperatives with 1,200 members. “Many [borrowers] have started mobile phone shops, groceries… garment shops and other small businesses,” said Geeta Chaudhary, president of the largest cooperative group, Lawajuni.

“We have to take our own initiative to build our own future,” said Laxmi Chaudhary, 24, a farmer in remote Sisinaya village. Two years ago, she took out a loan of $600 from Lawajuni Cooperative to grow rice and vegetables, and start going to school. She generated $5,000 this year and has already cleared her loan.

Another ex-Kamalari, Kamla Chaudhary, 22, took a loan of $1,000 to open a motorcycle repair business and today earns around $4,000 per year. “I have repaired over 1,000 motorcycles in one year and sold a lot of stuff. The business is good,” Chaudhary told IRIN. She is one of only a handful of female motor mechanics in the country.

“They are in a hurry to be successful and prove their worth,” said garment skills trainer Bir Bahadur Chaudhary at the Lawajuni Training Centre in Nepalgunj. “This is their way of getting back at the society that exploited them.” Over 50 ex-Kamalari girls will be trained in garment making this year and have already secured positions in factories in Kathmandu, where they can earn good salaries and benefits.

“We can even start our own business,” said 23-year-old Faguni Tharu, a trainee at the Lawajuni Training Centre. “I have not forgotten my past, but that will not stop me from moving forward.”