That he speaks, thinks and dreams in Khmer, the official language of Cambodia, is nothing unusual for Liv Yang Bin, an ethnic Vietnamese man whose great-grandparents settled generations earlier in the Trouy Sla commune, about 50km south of the capital, Phnom Penh.

“We are all Cambodians here. But the Khmer families, they own land or run shops. They live in the front of the village; we live here in the back,” said the 66 year old, whose community depends on fishing.

About 5 percent of Cambodia's 15 million people are ethnic Vietnamese. Like Liv, most have lived here for generations and identify themselves as Cambodian, yet they do not hold citizenship and are barred from access to basic rights, according to activists.

Liv's fate, said Ou Virak, president of the Cambodian Centre for Human Rights, is shared by tens of thousands of ethnic Vietnamese living in Cambodia.

“We need to address this racism. People are not able to have their true identity on… [their official documents], so it limits their right to own land, their right to vote, and their ability to go to school,” Virak said. A difference must be made between recent Vietnamese immigrants and ethnic Vietnamese who have lived here for generations and should therefore hold the same rights as Khmer Cambodians.

When each of Liv’s five children was born in Cambodia, authorities told him that the babies would not receive Cambodian birth certificates because they were Vietnamese.

Without a birth certificate, they could only unofficially attend some classes in school, but were not allowed to take the state exam at the end of grade nine, required for continuing their education at secondary school.

“They wanted to go to high school, but weren't allowed. So I had to teach them to be fishermen,” he said.

The discrimination is rooted in the history of these neighbouring countries, said Sotheara Vong, a history professor at the Royal University of Phnom Penh. “Ever since the 1650s, Cambodia has lost territory to Vietnam,” he said, naming the Mekong Delta and Phu Quoc, an island off the coast, as examples. To this day, Cambodians still refer to these territories by their Khmer names.

Anti-Vietnamese sentiment reached its peak during the 1970s, when the Lon Nol regime, followed by the notorious Khmer Rouge militia, are estimated to have killed or expelled 300,000 ethnic Vietnamese, according to Cambodia: Report From a Stricken Land, a history of the country from 1970 by Pulitzer prize-winner Henry Kamm.

“Basically, the charges are alleging that the Vietnamese minority was identified, targeted and systematically killed,” Olsen said. A date for the hearing has not been set. Today, old grudges over losing land to Vietnam have become new ones, said the Royal University’s Sotheara.

“Many people observe that there are more and more new Vietnamese immigrants arriving here, and the government gives the forest land concessions to Vietnamese businessmen. People are worried about the loss of sovereignty over their own land, something they have learned from Kampuchea Krom,” Sotheara said, referring to an area that includes the Mekong Delta. 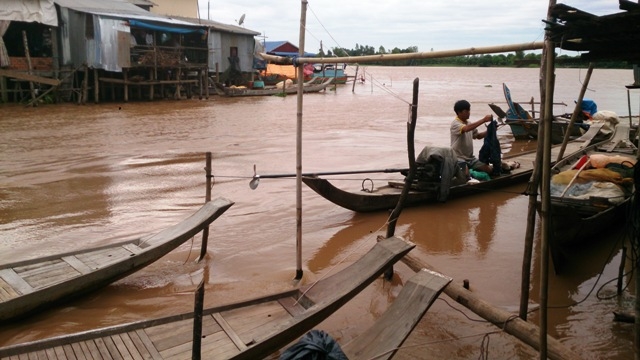 Not allowed to vote

During Cambodia's still-disputed national election on 28 July, anti-Vietnamese sentiment became even more apparent when ethnic Vietnamese eligible to vote were prevented from doing so by ethnic Khmers.

“Yuon are not allowed to vote,” about 500 people shouted while blocking Liv's polling station. Yuon is considered a racially charged term discriminatory to Vietnamese. “They pushed me, and they were so many; I was scared that they would beat me up,” Liv said. He was unable to cast his vote.

Government spokesperson Phay Siphan conceded there were human rights violations against the minority, and laws to protect them need to be improved. “We feel very sorry for those people; we respect them. But then we don't get any support from the opposition, the human rights groups or other governments. No one says a word about the issue,” Phay said.

Phil Robertson, the deputy director of Human Rights Watch’s Asia division, agreed that the problem had never been addressed.

“The whole problem is continuously swept under the carpet by just about all stakeholders concerned, and this is a travesty for this community and for the larger cause of human rights in Cambodia,” Robertson said.

Liv has grown used to the discrimination and would never consider leaving Cambodia. “Our ancestors lived and died here,” he said. “I feel Cambodian. I don't know why I’m not being treated like a Cambodian.”