Viviana Sari, an Indonesian high school student, was at a loss for words when psychiatrist Tiur Sihombing asked her to define the word “depression”.

Viviana was among more than two dozen students at Jakarta’s state-run High School No. 70 taking part in a recent counselling session conducted by a team from the Mobile Mental Health Service, a joint government and NGO initiative aimed at improving mental health in the country.

Strengthening community mental health systems is one of the government’s goals in improving access to health care, an area often neglected and poorly-funded in this largely rural nation of more than 250 million.

Each mobile clinic is staffed by a psychiatrist, a general practitioner, two psychologists and a nurse.

The pilot project - the brainchild of the Indonesian Health Ministry, the Metaforma Institute, a local NGO, and the Jakarta Health Department - aims to promote mental health care amid widespread ignorance about the scourge.

“The prevalence of mental health problems is among the highest in Jakarta, but many people are not aware,” Marleni Desnita, head of the counselling division at the Health Ministry’s directorate of mental health, told IRIN.

“With this project we hope to disseminate information about mental health, that mental health problems are treatable and those with the problems don’t need to be isolated, shackled or cast away,” she said.

According to the Ministry of Health, some 19 million Indonesians have some form of mental health disorder, including anxiety and depression, while at least one million have severe psychoses.

This in a country where about 18,000 people - mostly in rural areas and bereft of any mental health services - continue to be chained or shackled because of mental illness, while large pockets of the country still cite magic spells as the cause.

The mobile clinic project would be evaluated in three months and could be expanded to other provinces if deemed successful. So far, it has been well-received by the public, Desnita said.

“People have been very enthusiastic. They talk about it to their relatives and neighbours. It’s good because it means there’s less stigma attached to mental disorders,” she said.

Latest government statistics show the prevalence of anxiety and depression in Jakarta stands at 14 percent, higher than the national average, while the prevalence of serious of mental illness such as schizophrenia is around 2 percent. 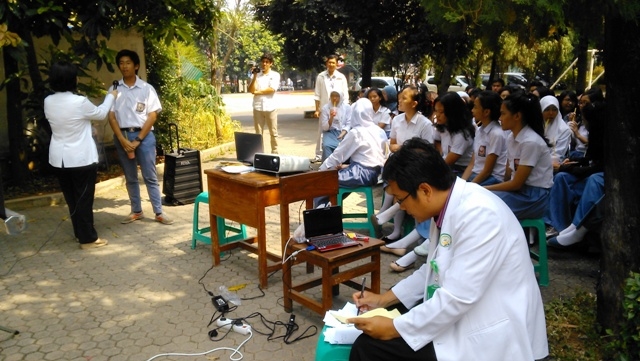 As part of its overall health strategy, the government plans to provide 30 percent of the country’s 9,000 community health clinics and 1,700 general hospitals with new and redistributed staff to provide basic mental health care by 2014.

Indonesia has fewer than 0.05 psychiatrists per 10,000 inhabitants, compared to 0.3 in neighbouring Singapore and 1.3 in Australia, the World Health Organization reported in 2013.

Sihombing, one of the psychiatrists on board the mobile clinic, said many of the patients who consulted her spoke of symptoms of serious mental disorders.

“It’s encouraging that more and more people are aware of the need to consult health professionals for their mental health issues,” Sihombing said.

The introduction of a universal health scheme in the capital in 2012 by Governor Joko Widodo, known as Jakarta Health Care, has also prompted more people to seek treatment.

“Before the introduction of the Jakarta Health Care, the Duren Sawit Mental Hospital where I practise received about 30-40 mental health patients a day, but now the number has doubled,” she said.

Viviana said she learned so much from the interaction with mobile clinic’s team.

“Now I know what depression is; how to deal with it and prevent it. As teenagers we have a lot of problems, but I hope I will never have to visit a psychiatrist.”