Supplying adequate drinking water, toilets and washrooms to this huge and rapidly growing camp for Syrian refugees in the Jordanian desert, in the middle of summer, is proving to be a challenge.

Created in a rush for an expected 10,000 people, Za’atari’s population is now more than 10 times that.

New cases of waterborne and water-related diseases are appearing in the camp on a weekly basis, including diarrhoea, scabies, leptospira, rotavirus and hepatitis A. Other communicable diseases related to hygiene conditions have also been reported, including acute jaundice syndrome, chicken pox, lice and measles. While these diseases are often seasonal or endemic in the region to begin with, and are normal for the camp’s population size, there have been alerts issued for measles - one case of which constitutes an outbreak - and the higher-than-usual levels of jaundice, scabies and lice.

Clinics in the camp say mothers have also been reporting a rise in bloody diarrhoea cases since the beginning of May. According to Za’atari’s disease surveillance report, official tests conducted in early June found watery diarrhoea affected 15 percent of the camp’s population, with 9.7 new cases per 1,000 people in the first week of June. Bloody diarrhoea had a morbidity rate of 1 percent, and an incidence rate of 0.4 new cases per 1,000 people in that week - both below the alert threshold levels and on a downward trend from earlier levels.  Upper respiratory tract infections, meanwhile, affected 20 percent of the camp's population, and its incidence, while decreasing, remained high, at 12.8 cases per 1,000 people that week.

These diseases have largely been treated and controlled, and in the last two weeks, no alerts have been issued. But with the hot summer temperatures - this is the first full summer at Za’atari camp - these diseases pose a constant threat.

Aid workers acknowledge that in older parts of the camp, the layout of water and sanitation facilities was poorly planned.

“There were missed opportunities from the way this camp was set up,” Goyol told IRIN. At a new camp being built in Jordan, he said, UNICEF is intending to create more, but smaller, water and sanitation blocks that would serve fewer people in family compounds.

In addition, Za’atari lies on top of an aquifer, making the construction of a sewage system impossible.

Every day nearly four million litres of water are pumped out of the shrinking aquifer, in one of the most water-poor countries in the world, and dispatched to the camp.

Contracted drivers truck in the water - enough for 35 litres per person per day - to some 2,000 public tanks spread across the camp’s 5sqkm, the size of about 600 football fields. They often find refugees already waiting to fill their buckets, sometimes in rowdy crowds where elderly women scream at young boys to wait their turn.

“Some people get water; some don’t,” said one woman.

But providing water and sanitation in the camp also means fighting theft, vandalism, aggression and, in some cases, violence. 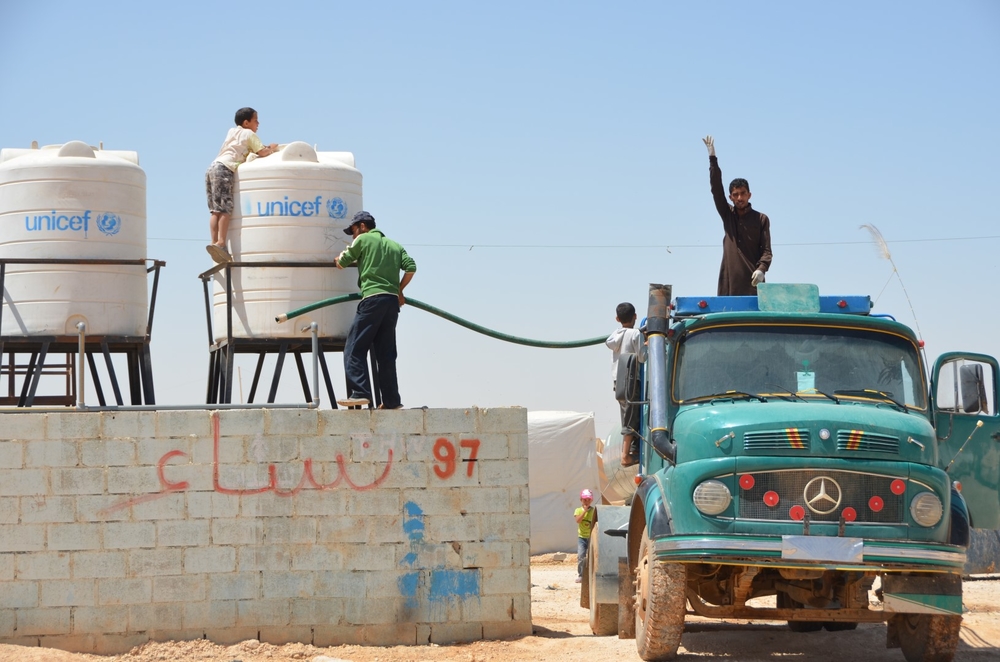 Drivers trucking water are intimidated on a daily basis, say aid workers. About once a month, their trucks are hijacked - sometimes causing injuries - and redirected to tanks that refugees have stolen or purchased for private use in or near their tents and trailers. (According to a recent assessment by the NGOs REACH and ACTED, 8 percent of households have private water storage).

Those drivers that do make it to public tanks may find them damaged or destroyed after a riot, sometimes leaking water.

Taps are vandalized daily, Goyol says, so even if the tank is intact, the tap may be broken or missing, with water leaking even more (refugees say they remove the taps so that the water pours faster). In some cases, they are removed or stolen within 20 minutes of their installation at the public bathrooms. Water specialists have had to try using different types of taps to see which will last the longest.

Refugees say the water is not clean and has made their children sick. Aid workers often drink the water themselves to prove to refugees that it is safe. Rather, they say, the problem is unsafe hygiene practices.

On this front, refugees say there are not enough bathrooms (toilets and washrooms) for the number of residents in the camp. Some say they have to walk up to 2km to get to a bathroom and wait in line for up to an hour, only to find no water in the taps.

A refugee named Marwan Ali told IRIN he built his own latrine (whether using materials stolen or purchased on the black market is unclear) because he did not want his daughters walking to the public toilets.

“Where is a woman’s dignity if she has to carry a bucket of water and walk between tents each time she wants to use the toilet?” he said.

One female refugee told IRIN she worried about potential harassment while walking alone in the dark. (Solar panels have since been added to bathrooms so they are lit at night).

The number of latrines does meet the SPHERE standard - the most widely used humanitarian standard - of one latrine per 50 people in the first phase of an emergency. “Progressively, we are working towards” the standard of 1 latrine per 20 people for stable camp conditions, Goyol said.

He estimates nearly one-third of refugees have built their own toilets next to their tents, the majority of them stealing metal sheets and cement blocks from the public bathrooms to do so. UNICEF estimates it has lost US$1.5 million in damage to its water and sanitation facilities.

“We all have individual needs,” says Goyol, “but there is the common good.”

Some refugees erect their own makeshift bathrooms just metres from the public toilet and washing blocks. Black pools of water seep out of their tents, forming swamp-like conditions - ideal breeding grounds for flies and other disease vectors.

One man, Ibrahim el-Baridi, who described himself as a member of one of the camp’s refugee committees responsible for bathrooms, said many public bathrooms were unusable, with large rocks thrown into toilet bowls. He blamed supporters of Syrian President Bashar al-Assad, who he said had infiltrated the camp to cause trouble.

If the condition of some latrines is “appalling”, as one aid worker put it, even the best of the functioning public bathrooms leave something to be desired, with only one functional tap, faeces on the ground and flies abuzz. Baby nappies block the sewage pipes.

Dirty water seeps out of a make-shift washroom attached to a refugee's tent in Za'atari camp for Syrians, northern Jordan. These soak pits pose health risks and could pollute underground water aquifers. 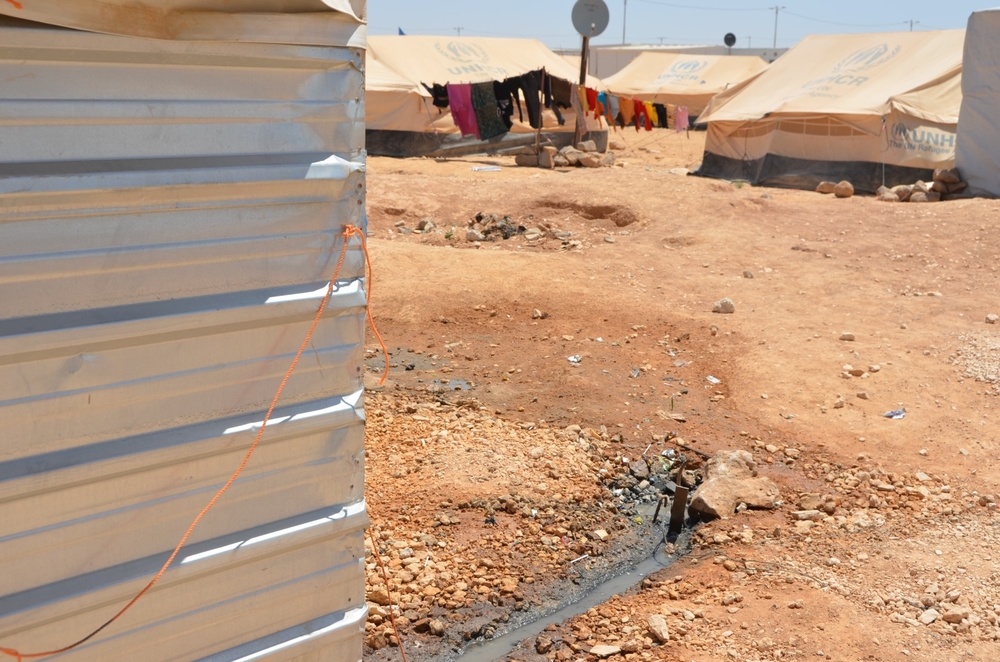 Many of the refugees, accustomed to high standards of sanitation and hygiene, have struggled to adapt to very different conditions in the camp. Some have requested that aid workers educate them on hygiene promotion.

As part of a community mapping program, households are visited on a weekly basis to monitor disease outbreaks.

In June, UNICEF trained 125 volunteer health workers in the camp about safe hygiene practices. The refugees then led an eight-day campaign, walking tent to tent across the entire camp to raise awareness of these practices.

“We do this work because we consider the camp as one home and the children as our own,” Mohamed Homsi, one of the health workers, told UNICEF. “When there’s a crack in a ship, the ship will sink.”

UNICEF now recognizes this kind of community mobilization is essential to engage the refugees, involve them in project development, and give them a sense of ownership in the process, making them less willing to destroy what they themselves have built.

As such, instead of paying individual refugees to clean the bathroom facilities through cash-for-work projects, it has created refugee committees responsible for operating and maintaining the facilities. Aid workers provide the brushes and detergents, and refugees rotate the cleaning duties among themselves.

In some cases, this “ownership”, as Goyal puts it, has led to better treatment of the facilities. In others, the damage continues.

In a pilot project in one part of the camp, Oxfam has started to pipe water from a central tank to the bathroom taps. UNICEF is also in the process of connecting pumping equipment for two existing boreholes to the public power supply (currently, the only option is to run the pumps off expensive generators), and has plans for a camp-wide network of pipes to carry the water.

In addition to these plans to improve the efficiency of water delivery, UNICEF is trying to promote water conservation, because, as Goyal says, “it’s not how much water you deliver. It’s how you use it.”