Late last year, IRIN launched the series Our Lives, which interviewed 20 men and women in 10 countries about how they coped with the cost of living. Those testimonies have been updated, along with basic monthly income and expenditure data, providing a fascinating insight into people’s domestic affairs.

Eighteen of our respondents said their household incomes had improved or stayed the same since December 2012. For Kumari Magar, a maid in Nepal, a new job helped her household earnings nearly double, from $90 to $170.  “My new employers often give us clothes and leftover food, including vegetables each week. I hope they keep me for a long time,” she said.

John Tamba in Liberia also saw his wage packet swell with a promotion from an elementary school teacher to a district schools supervisor, although the monthly expenditure of his six-member household on food increased by 50 percent.

In Kenya, Milicent Wanyama’s profits rose after she was able to add the sale of doughnuts to her breadcrumb business in the Ngomongo slums of Nairobi (some residents cannot afford an entire loaf), while Rashid Minhas in Pakistan was struggling as a taxi driver until a friend tipped him off to a better-paying factory job in Lahore.

Moloantoa Mokhomphatha in Lesotho, a builder, also feels his fortunes are beginning to change for the better. After enrolling in horticulture courses, he is now thinking about moving into the fruit business.

Increases in staple costs between December 2012 and April 2013

Increases in staple costs between December 2012 and April 2013. Using self-reported data, excluding ambiguous figures. Where both respondents from a country provided clear data, averages were used 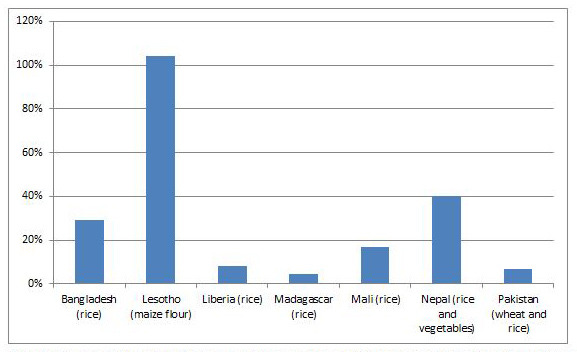 And then there are the not-so-lucky. Among them is Samir Uddin, our street hawker in Mymensing, Bangladesh. His monthly earnings are down, his food bill is up, and he is struggling to repay a $400 loan he took out last year. “Either the government should control food prices or introduce a rationing system for the poor. Otherwise, we cannot survive,” he told IRIN.

Security guard Kenyi Chaplain Paul in South Sudan also saw his household income fall; his wife lost some of her pigs as a fine after they broke into a neighbour’s farm and ate the crops.

Food price increases have been the bane of virtually all the respondents interviewed. In Lesotho, maize flour was up by over 100 percent, and rice and vegetables by 40 percent in Nepal, they told IRIN. In a number of cases, people admitted to belt-tightening to get by.

Other changes in people’s lives over the last several months include a baby for restaurateur Mama Tembely Coulibaly in Mali, a new husband for Lorpu Kah in Liberia, and a touch of celebrity status for Liliana Lova Rahoaritsalamanirinarisoa, who was featured on Madagascar TV as a result of this series.

Stay tuned for the next IRIN instalment.