The livelihoods of dozens of farmers just outside this small village, in a remote area of Lebanon’s Beka’a Valley near the Syrian border, hang in the balance.

Local farmers say many in the no-man’s land between the Syrian and Lebanese frontier posts, known as Mashari El Qaa, have abandoned their farms in recent months, in some cases leaving their equipment and running when they see Syrian rebels approaching. Others have stopped planting because of landmines or reduced their visits to their fields.

"We don't go there every day like before,” said Joseph, a local farmer. “We go once or twice a week, and we harvest or plant whatever we can. We're harvesting a bit but we have a lot of losses. We don't [have] the time to harvest properly. We do it in a rush.”

The border between Syria and Lebanon, blurry to begin with, has become increasingly so in recent months, as both Syrian rebels and regime soldiers cross into Lebanese territory to fight.

Up to 60 percent of the border area’s population depends on agriculture and raising livestock, which have come under growing strain as cross-border fighting has increased between forces supporting and opposing Syrian President Bashar al-Assad in the conflict next door.

Syrian anti-government rebels have used Lebanese farms to launch rockets into Shia villages in Hermel District 17km from El Qaa, allegedly aiming at villages controlled by the Lebanese militant group Hezbollah, which has been fighting in support of al-Assad’s forces inside Syria. Syrian government forces have also chased rebels into Lebanese territory.

Those farmers who do manage to harvest despite the insecurity struggle to sell their products, as they are competing with cheaper products smuggled in from Syria.

“The situation is bad in Syria,” said Pierre Saad, another farmer in El Qaa, “so they smuggle and sell their fruits here, where they are still going get a better price than in Syria. It's heavy competition for us. The local people… just go for the cheapest product.”

That's partly why in Firzil, one of the biggest fruit and vegetable markets in Lebanon’s fertile Beka’a Valley, most of the trucks leaving the market are three-quarters full.

Part of the problem, he said, was an absence of big buyers for export.

Before the conflict began, 20 percent of Lebanese products were exported to Syria, according to the UN Food and Agriculture Organization (FAO). In addition, Syria is the only land trade route to Iraq, Turkey and the Gulf, by far the largest market in the region.

But the border crossing in Mashari El Qaa is now closed. For much of April and May, all transit of agricultural goods between Syrian and Lebanon was blocked, according to FAO. Some crossings reopened late last month, but moving goods to and through Syria remains extremely risky.

Many agricultural goods are now exported through the ports of Beirut and Tripoli. But not all merchants can afford exports via ship or plane.

A recent assessment by FAO of the impact of the Syrian crisis on food security and agricultural livelihoods in neighbouring countries found that it has become extremely difficult for Lebanese farmers to sustain their livelihoods.

"One coping mechanism that we have noticed is selling animals, and thereby livelihood opportunities"

“We're not starving, but we will end up planting only for ourselves since we can't export or sell easily on the local market,” said Saad.

Those most affected along the border are the poorest and most vulnerable to begin with; larger-scale farmers do not take the risk of settling in the more insecure border area, said Lisbeth Albinus, humanitarian policy officer at FAO in Lebanon.

Many of these small-scale farms survived from smuggling things like tobacco, fuel, food, or even electronics to Syria - something that has become more complicated due to the conflict.

FAO worries this combination of factors could leave farmers much more vulnerable in the long-term.

“One coping mechanism that we have noticed is selling animals, and thereby livelihood opportunities,” Albinus said.

In a 7 June press release, FAO warned that without further support, more farmers would ultimately have to abandon their land and sell their livestock.

According to the FAO assessment, some 30,000 poor smallholder Lebanese who had been farming in Syria for generations have now had to return to Lebanon.

The Lebanese returnees are in “panic”, the assessment found, selling their dairy cattle at one third of the market price due to high animal feed costs, lack of winter grazing land and a need to finance immediate household living costs.

Many Syrian farmers have also relocated to the Lebanese side of the border, first seeking refuge in Mashari El Qaa and now, for some, being displaced once again.

Some came empty-handed, “have lost everything and live in very difficult conditions”, FAO’s Albinus said.

Others brought animals with them, and have rented abandoned farms for their animals to graze.

According to FAO, hundreds of cows, as well as 12,000 Syrian mountain and Shami goats have crossed into northern Lebanon, bringing the added threats of overgrazing, land degradation and potential desertification.

Firzil market, one of the biggest fruit and vegetable markets in Lebanon’s fertile Beka’a Valley, and a transit place for farmers and merchants. Lebanon's agriculture has suffered as a result of the crisis next-door in Syria 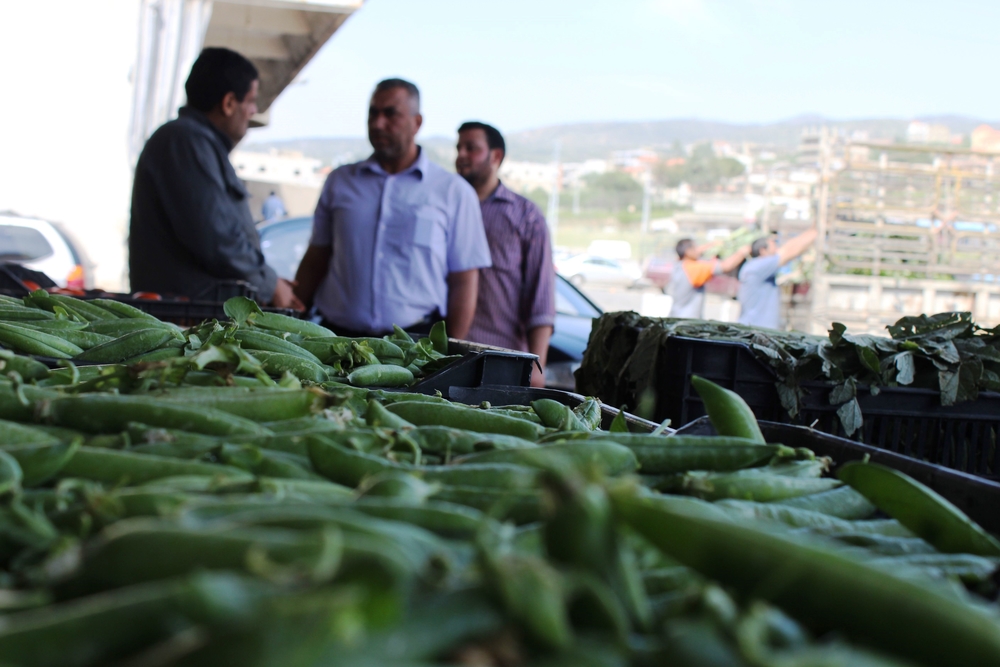 Adding more stress to the land, shepherds who used to spend summer on the Lebanese side and winter on the Syrian side, where it is dryer, have not been able to travel to Syria for the last two years.

The price of cattle, FAO said, has dropped by 60 percent.

Before the Syrian crisis, agricultural inputs, such as vaccinations, farm machinery, seeds, fertilizers, pesticides, animal feed and medicines were heavily subsidized in Syria. But veterinary services in Syria have weakened because of the conflict; animals coming from the Syrian market are not subject to any control, and some are not vaccinated, FAO said.

“One of our main concerns is the diseases that non-vaccinated animals could bring,” Albinus said.

Without proper checks, the increasing amount of smuggled agricultural commodities from Syria also significantly increases the risk of animal and plant diseases, including Foot and Mouth Disease and PPR, a viral disease also known as goat plague, the two most common transboundary animal diseases in the region, as well as the spread of plant pests.

The last outbreak of a transboundary animal disease in Lebanon occurred before the Syrian crisis in March 2010. Since then, the Ministry of Agriculture has been able to contain the threat. But “there is a sincere worry… that we will have another outbreak of these or other transboundary diseases in Lebanon,” Albinus said.

There is, however, a silver lining. Lebanon, which normally imports 60 percent of its dairy, could benefit from newly arrived Syrian shepherds in boosting local milk production. With the right support, “Lebanese and Syrian farmers working together could make a better livelihood, despite the Syrian crisis, Albinus said.

Farmers in Mashari El Qaa say government officials have visited them to assess their losses, “but until now, we haven’t received any concrete help,” Saad said.

Due to funding constraints, FAO has only been able to target the most vulnerable farmers in Lebanon, including the poorest smallholders, female-headed households and homes with disabled family members.

FAO has called for urgent financial support to establish farmers’ cooperatives and more milk collection centres; to implement a vaccination campaign to prevent the spread of animal diseases; and to establish food safety controls at the border.

As part of a regional UN-coordinated appeal for $4.4 billion launched on 7 June to help people in need inside Syria and in the affected neighbouring countries, FAO is requesting $8.5 million for proposed projects in Lebanon.