With monsoon rains having just started, life is set to become even more miserable for an estimated 140,000 internally displaced persons (IDPs) spread across 80 camps and sites in Mynamar’s Rakhine State. Flooding is predicted to be particularly serious in 13 camps, and urgent action is needed, say aid workers.

Rakhine State normally gets more than five metres of rain annually, most of it in June, July and August.

“Now more than ever, it’s imperative that we take immediate action. With monsoon rains now upon us, the level of urgency cannot be underestimated,” Barbara Manzi, head of the UN Office for the Coordination of Humanitarian Affairs (OCHA) in Myanmar, told IRIN.

Most of the IDPs are Rohingya Muslims staying in Sittwe, the state capital and one of nine townships affected by last year’s violence. Outside Sittwe, many of the camps in low-lying coastal areas are susceptible to tidal surges and reachable only by boat.

Aid agencies warn flooding is likely in many camps, especially some 13 in Sittwe, Pauktaw and Myebon townships, where living conditions for 69,000 IDPs are precarious.

In Pauktaw and Myebon camps, heavy flooding (upwards of 40cm) is expected, particularly during high tide. In Sittwe, floodwaters could reach 20-40cm in most camps over several weeks, a recent WASH (water, sanitation and hygiene) cluster assessment said.

“While in some camps, conditions are satisfactory; in most cases we have serious concerns,” Manzi said. “There are some places where it is absolutely appalling; especially in the makeshift camps.”

Of the 85,000 IDPs in Sittwe, 50 percent live in makeshift shelters made of little more than tent material, tarpaulins and bamboo, according to the UN Refugee Agency (UNHCR).

“Many of these will not be able to withstand the heavy rains,” said Richard Tracey, shelter coordinator for UNHCR in Sittwe, noting concerns over drainage in many areas.

However, by the end of May, the government will have completed another 607 eight-unit temporary shelters built of hardwood and bamboo, bringing the total number completed to 1,569 - enough for almost 80,000 people. “This is a major accomplishment by the government,” Tracey said.

A Rohingya woman outside her makeshift shelter at an IDP camp outside Sittwe following heavy monsoon rains. An estimated 140,000 people, the vast majority Muslim Rohingyas, were displaced by sectarian violence in 2012 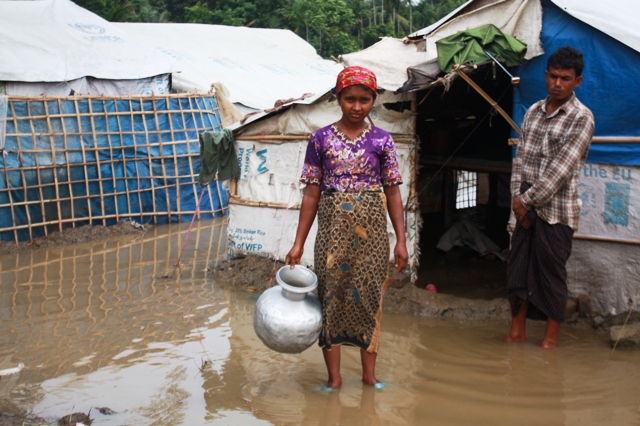 According to Médecins Sans Frontières (MSF) - Holland, the WASH situation is particular poor in five Rohingya IDP camps in Pauktaw and Myebon, which are “far below” Sphere standards.

“The IDPs are still living in tents in paddy fields, some in makeshift shelters, sleeping on the floor, surrounded by standing water and flooded by torrential rain,” said Ingrid Maria Johansen, project coordinator for MSF in Sittwe.

With the arrival of close to 7,000 IDPs from Nget Chaung camp in Pauktaw prior to tropical storm Mahasen earlier this month, the situation in Sin Tet Maw camp (Pauktaw) is particularly untenable with people crowded into a relatively small area with no latrines.

Drinking water is in short supply (most is brought in by boat) leading to a WASH situation which is unacceptable, particularly given that most IDPs have been there for more than six months.

“The main reason for these shortages appears to be a combination of access difficulties [access is only via the sea depending on weather conditions]; slow response by government, donors and WASH actors; technical challenges [e.g. high water tables]; and limitations imposed by the government on what work NGOs are allowed to do,” Johansen said.

The mainly Muslim Rohingya IDPs, as well more than 5,000 ethnic (mainly Buddhist) Rakhines, were displaced by two rounds of sectarian violence in 2012.