Eights months after dozens of Shia Muslims on Indonesia’s Madura Island were driven from their homes by mobs from neighbouring Sunni villages, the displaced remain in poor conditions with no immediate prospect of returning.

Almost 170 Shias in Madura’s Sampang District are still confined to a gymnasium, unable to work or travel. They are dependent on government provisions for their survival. Local authorities have warned them to stay near the gym for their safety.

“We have no chance to leave here. It feels like we’re in jail,” said Ustadz Iklil, 40.

He said families have limited themselves to one meal a day when government food provisions fall short, and that basic hygiene has been difficult to maintain.

The displaced are living on tennis courts in a tin-roofed hangar. A stench permeates much of the shelter’s interior, where there is only one bathroom.

People there said they were psychologically and physically unravelling.

“At any given time, many of the people here are sick,” said Ummi Kulsum, 37. She said medical personnel from the local state hospital were supposed to make daily trips to the shelter, but none had visited since October.

“We’re struggling to live here, and we still have no clear decision from the government about our future,” she said.

Rokiyah, 35, who goes by one name, said her two-month-old baby struggled to sleep in the stuffy, overcrowded compound. “The people in our district couldn’t accept our difference so now our children are forced to grow up in these conditions,” she said.

The children attend a makeshift classroom under a tarp in a field facing the complex. Classes are staffed by volunteers.

Although Sunni is officially the dominant form of Islam in the country, many Indonesians identify themselves simply as Muslim.

Madura Island, however, has a history of conservatism, and those on the island who publicly identify as Shia are regarded with suspicion and disapproval by some of the Sunni majority. The size of the Shia population in Madura - and the rest of Indonesia - is unknown due to underreporting and fears of reprisals. There are few villages on the island that openly identify as Shia.

In August 2012, local Sunnis, some wielding traditional machete-like weapons, attacked two of the district’s Shia villages. One Shia man was killed and another, who suffered multiple deep cuts, barely survived. Dozens were seriously injured in the attack, which left 48 Shia homes destroyed by fire.

Villagers said the violence erupted when Shia schoolchildren, barred from attending their local school, attempted to reach a neighbouring school. Sunni men blocked them, and the confrontation escalated into a wider attack on Shia homes, said witnesses.

With few exceptions, the displaced Shias lost all their possessions.

A young Shia man returns with police protection to view the rubble of Shia homes in his village on Madura Island, which was attacked last year by neighboring Sunnis. His father was repeatedly stabbed in the attack and barely survived 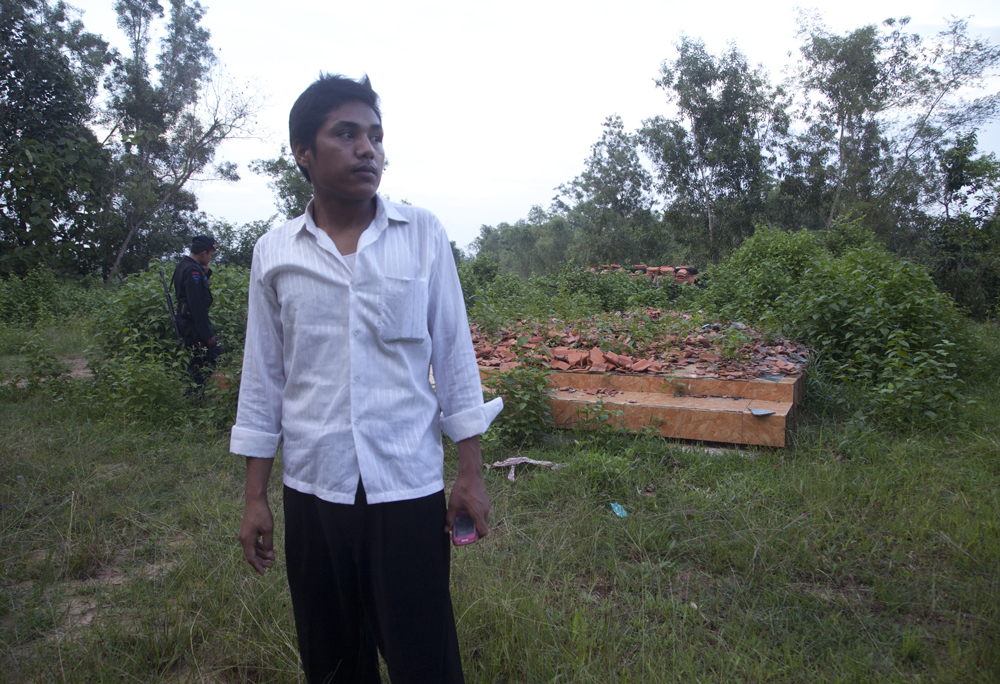 Among the main targets of hard-line Islamist groups from the country’s Sunni majority are minority Muslim sects and Christians, according to a recent Human Rights Watch (HRW) report.

The Jakarta-based Setara Institute, which monitors religious freedom in Indonesia, identified 216 cases of violent attacks on religious minorities in 2010, 244 cases in 2011, and 264 cases in 2012.

According to HRW, the state is complicit in the abuse. “Harassment and intimidation of minority communities by militant Islamist groups has been facilitated by the active or passive involvement of Indonesian government officials and security forces,” the report said.

In an interview with international media, a spokesman from the Ministry of Religious Affairs denied religious intolerance was a serious problem, calling Indonesia a “laboratory of religious harmony”.

It is not clear which authority ultimately controls the fate of the displaced Shias in Sampang.

According to Andreas Harsono, an author of the HRW report, national agencies with influence over such cases include the president’s office, the national police chief, and the coordinating minister for legal, political and security affairs. But, he added, decentralization measures started in 2004 have boosted local officials’ control over disputes within their jurisdiction.

Jakarta should step in as local solutions are not forthcoming, he said.

“We need time to address the issue that [led to] conflict there,” said Rudi Setiadi, the head of the Board of National Unity for Sampang Regency, a government office responsible for security, stability and other issues.

“From a [human] rights perspective, [the Shias] should of course be able to go back to the village and the government should be responsible for protecting them at any cost,” said Akhol Firhaus of the Centre for Marginalized People, a local NGO.