Less than a year after Bangkok was chosen as a "role model city" by the UN International Strategy for Disaster Reduction (UNISDR) as part of the UN's 2010-2015 "Making Cities Resilient" campaign, the worst floods in half a century put that distinction to the test.

IRIN asked experts what the 3,000 low-lying cities such as Bangkok - which includes its delta neighbours - can do to improve their flood resilience.

"Cities need to decide the levels of security that they want and which areas need more protection," he said.

Unbalanced development is the weakest point of urban planning in many Asian countries, but Thailand's case is more extreme in that it has focused all its energy on the country's business and political capital, said Anisur Rahman, land use planning specialist at the Bangkok-based Asian Disaster Prevention Center (ADPC).

"Better planning would be developing the country with more attention given to other [surrounding] cities, so they can help share the pressure, especially in a catastrophic situation like this."

Instead of allowing new businesses to set up in and around Bangkok, future investments should be diverted to less-developed areas on higher land, said Rahman.

Lawmakers from Thailand's ruling party have submitted a parliamentary motion to move the capital to Nakhon Nayok Province - a sloping terrain with higher elevation.

For cities that are slowly sinking and have rising sea levels, governments need to regulate water resources, said Nat Marjang, a lecturer on water resources engineering at the Bangkok-based Kasetsart University.

"Before the law, which regulates groundwater extraction [in Thailand], was enforced, many factories built their own wells to extract water for industrial use. This is an important factor contributing to land subsidence." 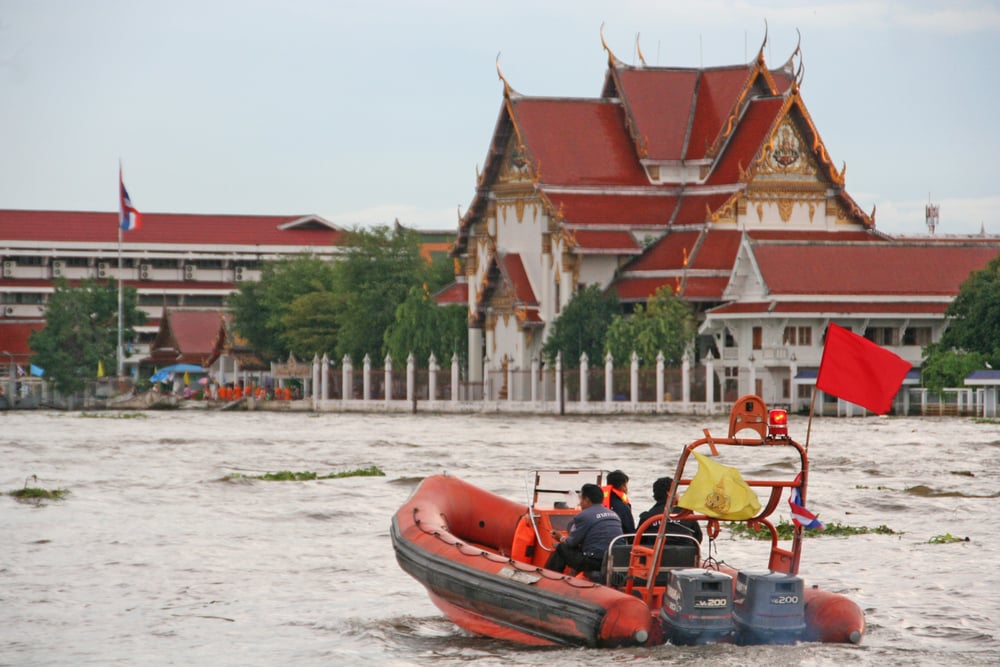 Bangkok is sinking by 30mm annually, according to the Bangkok Metropolitan Administration.

"What we need from them is not only corporate social responsibility and money, but their active involvement. It can be as simple as building a dyke around their factories, choosing the right locations to build factories and coming up with disaster contingency plans."

The Federation of Thai Industries estimated losses from the seven hardest-hit industrial estates could reach US$13 billion, covering 891 factories and 460,000 workers, according to local media.

Despite the extensive network of flood-control infrastructure already in place in Bangkok, experts said it largely failed to keep pace with the city's dramatic urbanization and development.

From 1985 to 2010, the percentage of the total population living in urban areas in Thailand increased from 26.8 to 34 percent, adding 10.5 million people to cities, according to the most recent UN world urbanization prospects.

While many officials believe the barrier known as His Majesty King's dyke, which runs north to south in eastern Bangkok, can save the city from flooding, Vewey said it was designed to handle lower-frequency floods and not a one-in-50-years flood like this year's.

"I'm impressed by the speed of sandbagging and the distribution of food and water [in Thailand], but you can't always solve problems with sandbags... It's shocking how people are unprepared for the flood. It's as if the phenomenon of flooding has been completely forgotten in Thailand," Verwey said.

Flooding in 1995 killed more than 400 people and affected close to four million, according to the government.

Investing in flood prevention is a "calculated choice", said Kimio at JICA. "There are only two options, either reduce the speed of development or invest more in flood control," he said.

Since the 1980s, the risk of economic loss due to floods in Organisation for Economic Cooperation and Development countries has increased by more than 160 percent, outstripping the growth of GDP per capita, according to UNISDR.

Nine of the top 10 coastal flood-prone cities by 2070, including Bangkok, are in Asia, according to a recent World Bank report.

Asia accounts for more than half of the developing world's cities most vulnerable to flooding, according to UN-HABITAT.