Despite a government crackdown, Sudan’s cost-of-living protests are unlikely to end soon. Hundreds of people came out on the streets of Khartoum and Omdurman on Tuesday and Wednesday in growing unrest after bread prices more than doubled earlier this month following a jump in the cost of flour. Riot police fired teargas and made a number of arrests, including the detention of opposition politicians. One eyewitness in Khartoum told IRIN he believes “the government is in trouble” as there is real anger on the streets towards an administration viewed as abusive and corrupt. “People are sick of the violence of the authorities; [the protesters] have been non-violent, but I see them taking a different step and starting to defend themselves,” he said. The government has done away with subsidies on bread and fuel and devalued the currency to close a yawning budget gap. But Sudan’s economy could be in worse shape than the authorities are admitting, with a real inflation rate potentially as high as 50 percent. In 2013 the security forces killed dozens of people in similar cost-of-living protests. Look out for IRIN’s exclusive report next week on the corruption and abuse at the heart of the EU migration policy as implemented by Khartoum.

We've heard a lot about Artificial Intelligence recently. Or is it Machine Learning? Anyway, humans are evidently getting better at training computers. The World Bank has teamed up with drone and photography NGOs WeRobotics and OpenAerialMap to see if computers can automatically identify tree species (taking jobs, again?). Geeks can compete to make the best code to automatically distinguish trees from overhead photographs. Imagery can then be compared before and after disasters to see how much local agriculture might be affected. The test is tuned for Pacific islands set with aerial photos of Tonga. To win, the AI code should know the difference between coconut, banana, papaya, and mango trees 80 percent of the time, and not mix them up with electricity poles or random objects. Human collaborators have classified 13,000 objects by eye, and the computers have to figure out how to do it themselves. May the best bot win. 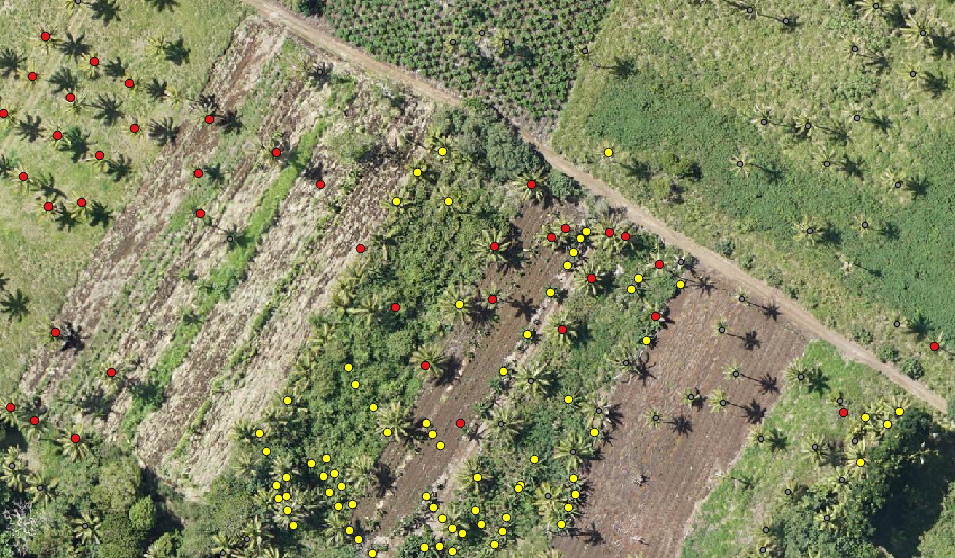 We’ve said it before, we’ll say it again: while the violence of Yemen’s war has been deadly, the economic collapse it has caused has also had disastrous consequences for civilians. In the past week or so, Yemen’s currency, the rial, sunk to new lows, further damaging the purchasing power of Yemenis already struggling to buy food. Prime Minister Ahmed Obeid bin Daghr, allied with internationally recognised (but deposed) President Abd Rabbu Mansour Hadi, appealed for help from his allies in Saudi Arabia, saying “saving the riyal means saving Yemenis from inevitable hunger”. The Saudis stepped in fairly quickly, saying they would deposit $2 billion in Yemen’s central bank. Hadi’s government officially moved the central bank to Aden in 2016, but a branch still operates in Houthi rebel-controlled Sana’a. So while this move will hopefully give the currency the boost it needs (to some extent it already has), some worry that the infusion will merely allow Hadi’s allies to pay civil servants who have long gone without their salaries, while workers in Houthi-controlled territories are ignored. Others have warned that the injection of funds is a short-term fix and say the central bank needs to follow up with responsible fiscal practice. Money for food, fuel for conflict, or a strategic deposit? This one might just be all three.

It sounds made up, but there are fears a volatile volcano in Papua New Guinea could send a now-deserted island plunging into the ocean, triggering a tsunami that would threaten towns and villages hundreds of kilometres away. Earlier this month, a series of earthquakes caused a volcanic eruption on tiny Kadovar Island, off the country’s northern coast, forcing authorities to evacuate its entire population: some 691 people. Landslides sent 15 homes tumbling into the sea, while volcanic ash destroyed 80 percent of the island, according to provincial officials. But authorities fear an escalation in volcanic activity could cause even greater damage, according to an assessment by disaster management officials and NGOs Oxfam and Save the Children. Prime Minister Peter O’Neill this week issued a stark warning about the seriousness of the threat. The population of Kadovar Island has taken refuge on neighbouring Ruprup Island, where aid groups say there is overcrowding and dwindling food supplies. But the tsunami threat means Kadovar Islanders, as well as their hosts on Ruprup and another island, may all have to be evacuated to the mainland – a daunting task when boats and fuel are in short supply. It’s not the only volcano causing humanitarian problems in the region. Last week, Mayon Volcano in the Philippines erupted, spilling rocks and lava along a two-kilometre path and forcing more than 26,000 people to evacuate. And people in Bali, Indonesia continue to grapple with the uncertainty of Mount Agung, which rumbled in late 2017; some 46,000 people are still living in evacuation centres on the island.

Artisanal mines have the edge

Artisanal mining has a reputation for danger, environmental destruction, and minimal returns – basically a lottery for losers. But the evidence suggests that miners and the community are striking it luckier than assumed. A World Bank study has found that households that live around artisanal mines in Burkina Faso profit far more from increases in gold prices than those around industrial mines. Not only do industrial gold mines fail to pass on the profits, but the benefits of artisanal mining are “economically significant”. It’s something we can assume the 40 million-odd small-scale miners around the world have known for a while.

The Swiss Alpine town of Davos is gearing up for next week’s World Economic Forum. While some humanitarians have been sceptical of what started out as a relatively exclusive gathering of business leaders (even if one special guest this year seems to have abandoned his proclaimed dislike for the global elite), this year’s programme features sessions on a day in the life of a refugee, innovative humanitarian financing, global pandemics, and a host of peace and security issues (watch select sessions here). Attendees range from Bill Gates to the Iraqi prime minister to the heads of UN agencies and NGOs, as the public and private sectors strive for closer collaboration in addressing global challenges. Fresh from the publication of our forecast of the crises that will shape 2018, IRIN will be co-hosting a Global Humanitarian Outlook (event details here). Tune in to watch the live webstream at 21:30 CET (2030 GMT) on Wednesday.

On Friday, 26 January, IRIN Senior Editor Ben Parker will join the International Committee of the Red Cross, the UN’s refugee agency (UNHCR), and Privacy International on a panel about Data Protection Challenges in Humanitarian Action. The event is organised by the Brussels Privacy Hub as part of a major conference in Belgium on "Computers, Privacy and Data Protection". Parker has form on this important but poorly understood issue, as shown by his recent stream of reporting.