Every week, IRIN’s team of editors takes a look at what lies ahead on our humanitarian agenda and curates a selection of some of the best reports, opinion, and journalism you may have missed:

Next week in the famine spotlight…

Here’s a quick quiz: Which country has the UN called the largest food insecurity emergency in the world? Is it Nigeria, where the northeast has been hit hard by the Boko Haram insurgency? How about Cameroon, Chad, or Niger, also on the borders of Lake Chad and dealing with the fallout of the same crisis – all the focus of today’s Oslo donor conference to raise funds for the region? Perhaps South Sudan, where famine has just been declared? Wrong, wrong, and wrong again. It’s Yemen, where this week the UN warned that 7.3 million people are on the brink of famine. This is almost entirely a man-made crisis created by two years of war, and while new UN Secretary-General Antonio Guterres is making an effort to restart peace talks, there doesn’t appear to be much appetite by the warring parties. Yemen is a tough place to report from and to draw attention to for reasons we’ve detailed again and again. Next week, we’ll give it another go with two exclusive reports on what the looming famine looks like in what was already the poorest country in the region, even before the fighting began.

Xenophobia on the march again in South Africa

Anti-immigrant sentiment has reared its ugly head again in South Africa with stores looted, buildings set aflame, and people being attacked on the streets of Pretoria, the country’s capital, just for looking foreign. Armed police are breaking up protests and Nigeria is calling on the African Union to get involved to tamp out the xenophobic fervour. We’ve been here before. Bloody anti-immigrant riots in 2008 left scores dead and thousands displaced. More recently, in 2015, seven people were killed after an angry mob wielding makeshift weapons attacked immigrants and torched buildings on the streets of Johannesburg. A similar riot broke out in Durban the same year, leaving five dead and causing thousands of foreigners to flee. But, as IRIN’s Africa Editor Obi Anyadike explained at the time, xenophobia doesn’t exist in isolation. South Africa’s unemployment rate is at a near-record high, and many are falling victim to the perception that the country is becoming overrun with immigrants who are all taking their jobs. True, South Africa is a sought-after destination for many fleeing conflict and economic hardship elsewhere in the continent. But research shows that foreign migrants are net contributors to the economy and that the numbers of those born abroad has declined anyway. Appeals for calm are all very well, but the government needs to get serious about tackling income inequality and addressing the socio-economic roots of the problem.

The International Aid Transparency Initiative (IATI) is a powerful but complex set of rules to structure data about development and humanitarian financing. IATI data from donors and aid agencies describes hundreds of thousands of projects, budgets, transactions, disbursements and results. Many of the biggest donors produce reports in the format, often providing detail not easily available elsewhere. However, the voluntary initiative suffers from wide variation in data quality and completeness and can be intimidating for the non-specialist to grasp. IATI is tentatively adopted as the data standard for a new era of humanitarian finance transparency, called for in the Grand Bargain, but critical mass seems a way off.

(IRIN would be glad to hear your views on the state of open data in the humanitarian sector: contact [email protected])

Dubbed Gimme Shelter, organisers are billing this as the “world’s first film festival exploring the connections between climate change and migration”. The four-day event kicks off in Newcastle, UK, on 16 March, and it features films as well as lectures and art exhibitions. One talk delves into controversial media coverage linking climate change to Syria’s civil war, and  “examines some of the latest research exploring the links between climate change and armed conflict.” Films include “The Age of Consequences”, which investigates the impact of climate change on security and comes with the tag line: “The Hurt Locker meets An Inconvenient Truth”. 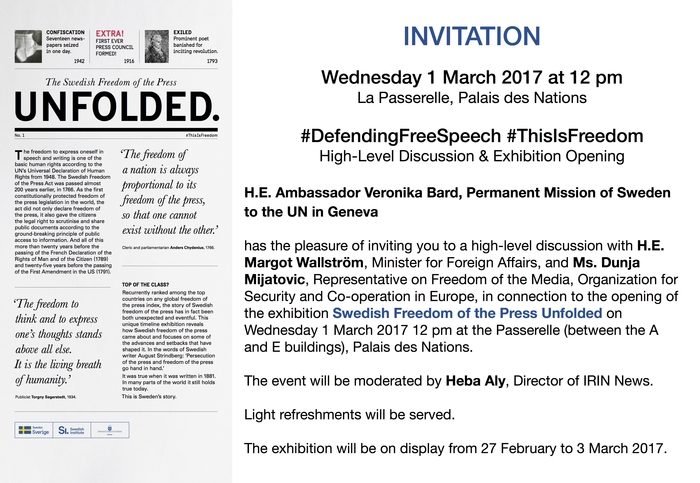 This Wednesday, 1 March, join us at the opening of the exhibition “The Swedish Freedom of the Press Unfolded” and hear how Sweden came to be a forerunner for freedom of the press.

The event kicks off at 12 pm (GMT+1) with a discussion moderated by IRIN Director Heba Aly. Speakers include:

-    H.E. Veronika Bard, Permanent Representative of Sweden to the UN

-    Ms. Dunja Mijatovix, Representative on Freedom of the Media, Organization for Security and Co-operation in Europe

Join live – on the spot at La Passerelle in Geneva’s Palais des Nations, or remotely via our Facebook page.

Nice map, shame about the subtext

Not so humble brag: IRIN’s recent map and listicle on foreign military bases in Africa is proving very popular. Ten months ago, we attempted a more ambitious map outlining more than 40 ongoing conflicts around the globe. But credit where credit is due: This “Global Conflict Tracker” from the Council on Foreign Relations’ Center for Preventive Action is as good, if not better. Visually, it clearly surpasses our April 2016 effort, but this is part of the problem. Using pretty, coloured circles to distinguish different levels of “impact on US interests”, it has a three-pronged scale from critical to significant to limited. Scroll down from the map itself and these grades of US interest become separate sections with thumbnails taking you to extensive briefings on each conflict. But studying these reveals a depressing subtext: Unless the United States has a vested interest in a conflict, no one really cares. At the high-end, unsurprisingly, are only countries that have seen direct US military involvement: Afghanistan, Iraq, Libya and Syria, plus those to do with rival superpower China. But it’s the lowest end of the spectrum that is more revealing. It reads like a compendium of the world’s most neglected conflicts. IRIN readers will know them only too well: Somalia, Congo, Central African Republic, South Sudan, Myanmar, Mali, and Burundi. Yemen does makes it into the middle “significant” category, but then again US Navy SEALs performed an ill-judged raid there recently and the Pentagon is reportedly considering ramping up US involvement. Looking at this map, and the conflicts marked critical, that might not be a good thing.

One reason is alluded to in the entry above, but there are many others as to why Central African Republic finds itself in renewed turmoil. If depth of despondency or complete lack of hope could propel a crisis onto the front pages, CAR would surely have a chance. Regular IRIN contributor Philip Kleinfeld does his best here: Stunning photographs and vivid frontline testimony. The underlying facts speak for themselves: no government control outside the capital; violence spreading within and between different Muslim communities, let alone the Christian-Muslim dynamic that characterised the previous conflagration in 2013; record displacement above 410,000; UN peacekeepers struggling to prevent the conflict from enveloping the second city of Bambari. Oh, and innocent civilians are routinely targeted because of ethnicity. “They turned up in vehicles and were shooting everywhere,” Issa, 26, tells IRIN. “My husband fought back to protect the community, but he was shot in the head.” This is great reporting. But will it make a blind bit of difference?