This article is part of our in-depth coverage. Read more like this...
RANGAMATI DISTRICT, Bangladesh

The signs of landslide risk are gouged into the jagged hills surrounding Rangamati town in southeast Bangladesh, where remnants of crushed and battered homes sit alongside expanding hillside settlements.

Two years ago, Masi Jai Marma narrowly escaped with her life when torrential downpours triggered landslides that buried her home under an avalanche of mud.

“When I woke up, I found myself in chest-high mud,” recalled Masi, a member of the Marma, one of 11 indigenous groups from the hill tract districts.

A neighbour dragged her to safety as water and mud gushed through her home. But her nephew and two nieces died. The children were among at least 170 people killed during the June 2017 landslides, which also destroyed or damaged 40,000 homes.

Once rare, casualties from landslides are becoming increasingly common here in the mountainous districts of Bangladesh’s Chittagong Hill Tracts, a former conflict zone, as local indigenous communities and landless settlers from other parts of the country rush to build homes on vacant but risky slopes. 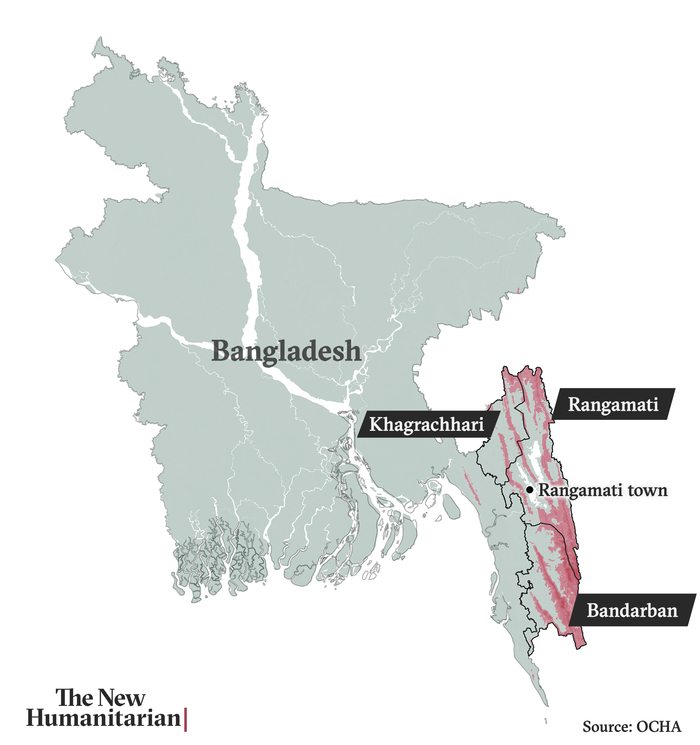 Stark contrasts in elevation: Much of Bangladesh’s land consists of low-lying delta plains. But the southeast hill tract districts are mountainous, leading to different disaster risks like landslides and flash floods.

The annual monsoon season, which typically begins in June and lasts through October, brings heavy rainfall that can soak the slippery hillsides and dislodge unstable clay soil. Climate change is expected to make extreme weather more volatile and more intense, increasing the likelihood of landslides.

But disaster risk experts and local groups say the dangers are exacerbated by communities themselves, through rapid and unplanned urbanisation. Over more than a decade, the hill tract districts have seen an influx of settlers from more congested parts of Bangladesh.

Instead of adapting to the topography, they’ve imported building techniques better suited to the low-lying plains, carving precarious new homes and farm plots deep into the hillsides.

“The hills are taking revenge on us,” said Shahidul Islam, a professor of geography and environment at Dhaka University, who has studied land use and disaster risk in the Chittagong Hill Tracts.

The indigenous groups that call this part of Bangladesh home, like Masi Jai’s Marma community, have traditionally adapted to the danger by avoiding the steepest slopes and building stilted homes that allow excess water to pass under, rather than through. But even these traditional practices are being left behind as lightweight material like bamboo becomes more expensive and as more families move to urbanising areas like Rangamati town, local aid workers say.

Disaster risk experts say the government has been slow to adapt. They’re calling on the government to boost early warning and landslide preparedness programmes, and to promote traditional indigenous building practices. Local authorities, however, say the biggest problem is that people are building on unsafe land – and they can’t force everyone to move. 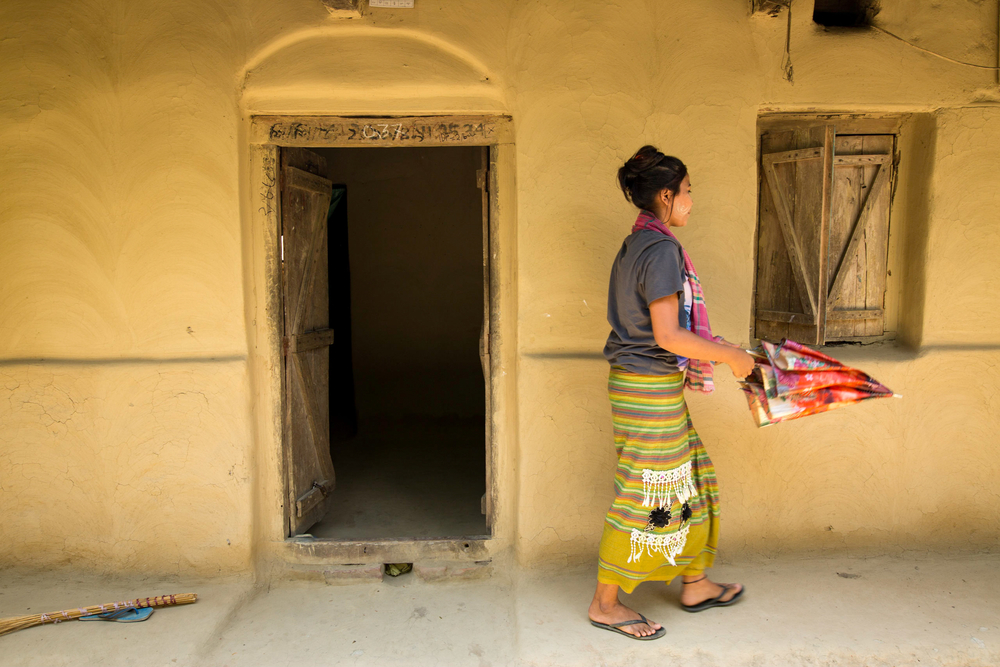 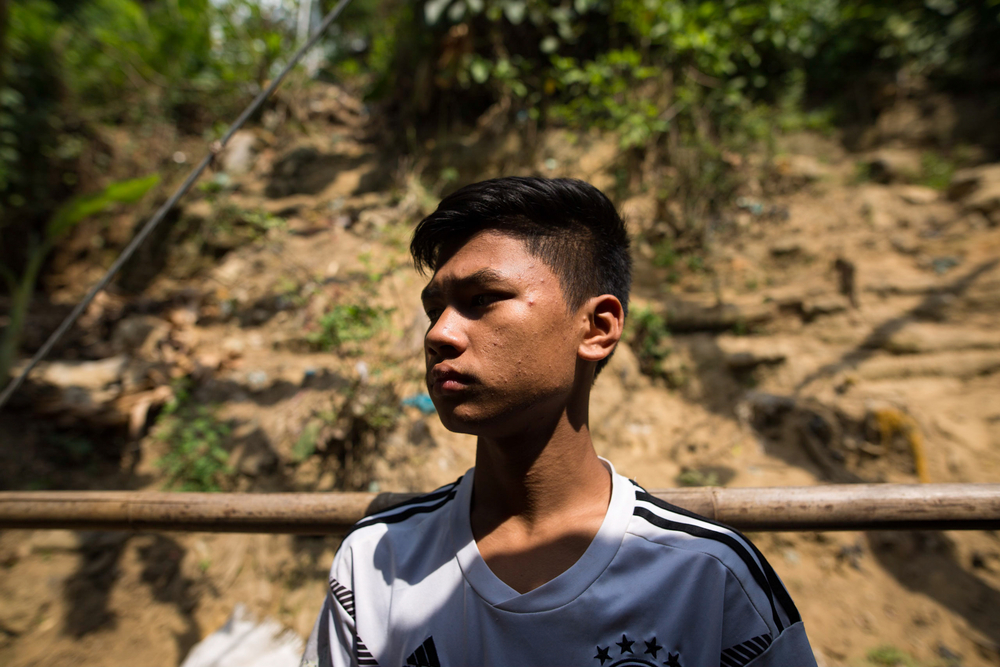 Prasan Tripura, whose father Mintu Tripura was killed in the 2017 landslide, stands in front of his home in Rangamati town. 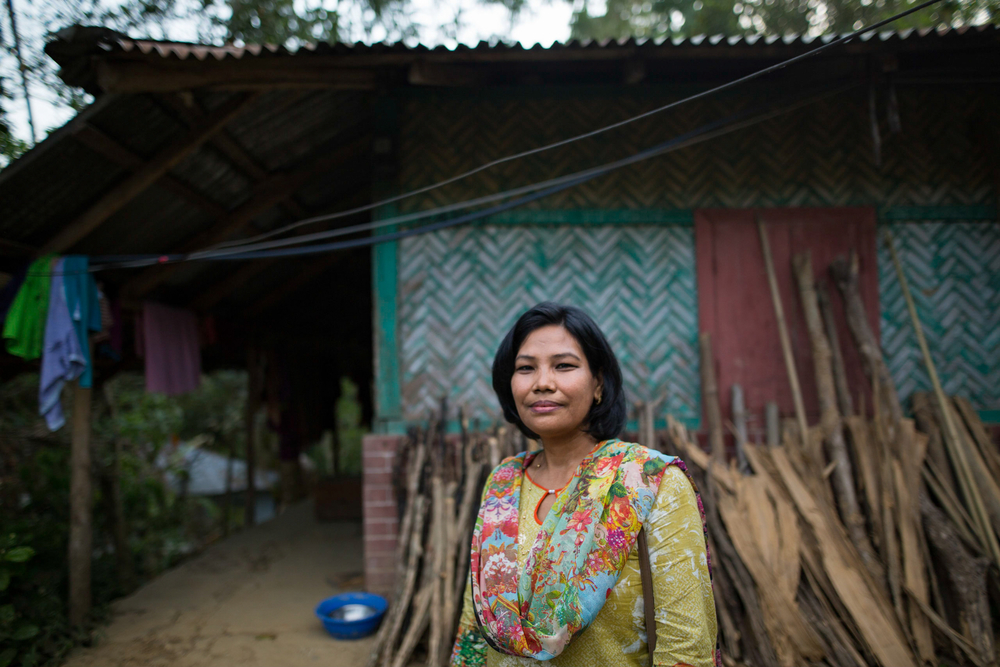 Moni Mala, a local aid worker, stands before her house, which was damaged during the June 2017 landslide. 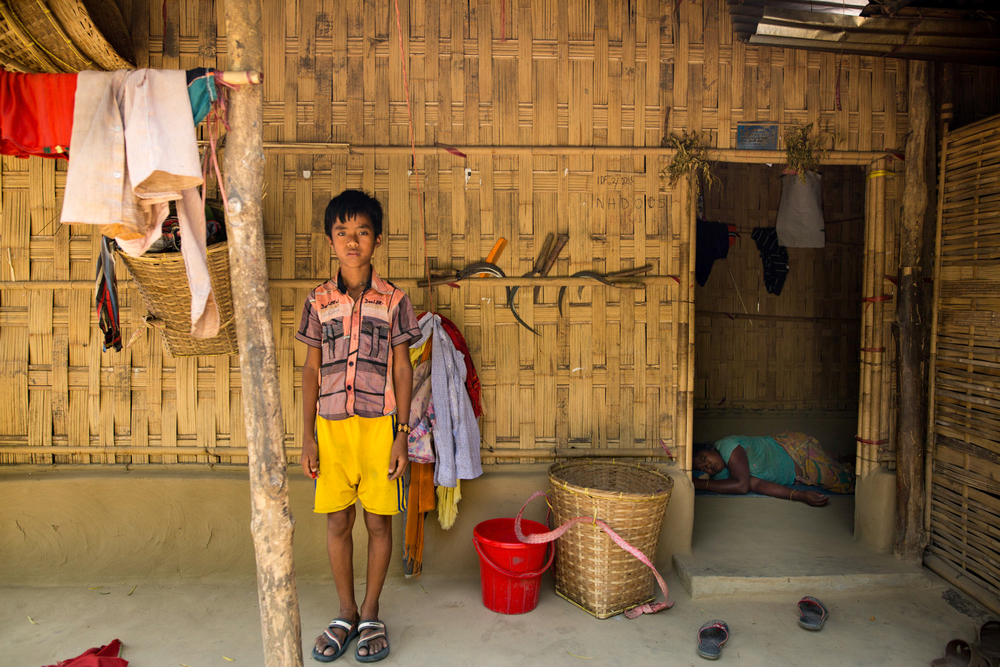 A boy stands before his bamboo stilt house in an indigenous settlement near Rangamati town. Local advocates say traditional knowledge has helped indigenous communities adapt to their surroundings for generations. 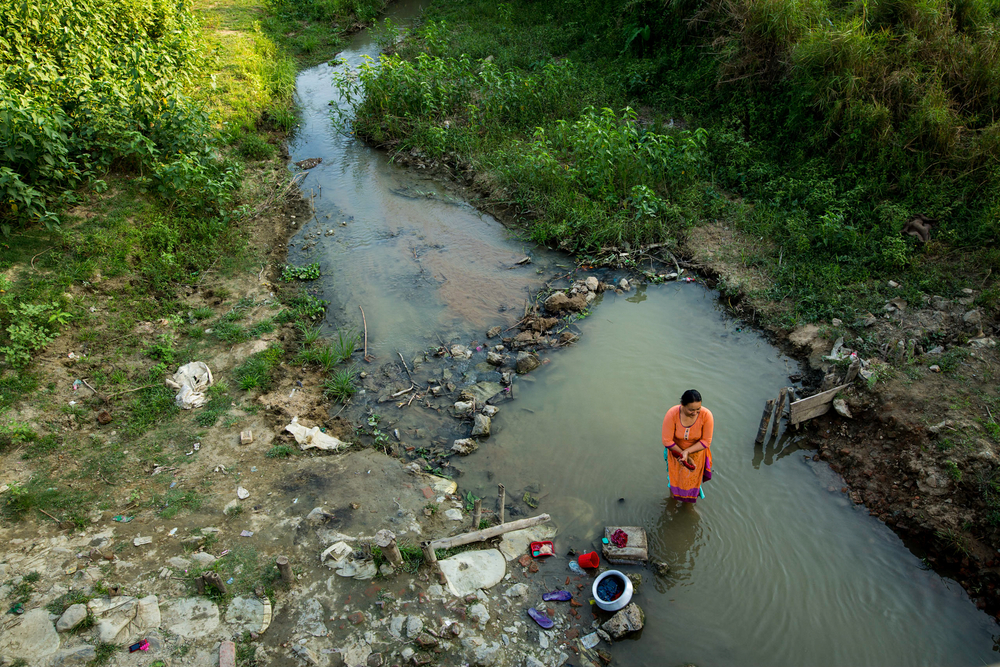 A woman washes clothes in a shallow canal. The monsoon season brings the risk of landslides and flash floods, but water is scarce in the dry season.

Waves of government-supported migration in the 1980s saw Bengali settlers move to the area in large numbers, which indigenous communities saw as an attempt to push out the local population. The conflict left at least 2,500 civilians dead and displaced at least 90,000 indigenous people before a peace accord was struck in 1997.

The worst of the violence has subsided, but sporadic unrest has continued in the ensuing years, often rooted in disputes over land. In June 2017, for example, days before the deadly landslides, settlers set fire to hundreds of homes in one part of Rangamati district.

Today, the indigenous communities and the settlers in and around Rangamati town, the administrative capital for the Chittagong Hill Tracts, both live with mounting landslide risks.

“We own no land. Except for this, we have nowhere to go.”

On a hilltop in Rupnagar, a mostly Bengali ward, a simple sign along a steep dirt path offers a stark warning for 41-year-old Anju Barua and some 200 other families living here: “Risky area for landslides,” it reads. “Dwelling prohibited.”

Barua knows the danger: the June 2017 landslides killed several of her neighbours, including the parents of two now-orphaned children. But like most here, she said she can’t afford to move anywhere safer.

“We own no land. Except for this, we have nowhere to go,” Barua said. 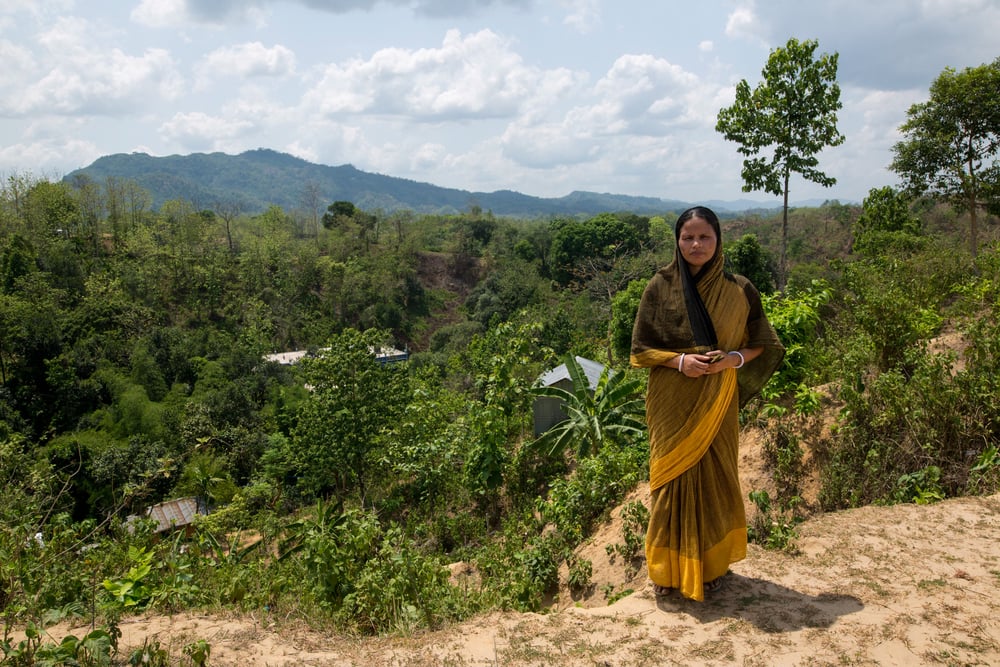 Zakir Hossain Chowdhury/TNH
Anju Barua, a resident of a settler community, stands near the top of a hill overlooking her community.

In Shimultali, another settler-dominated area, residents are still struggling to rebuild two years later. Nargis Akter, who moved here from central Bangladesh a decade ago, said the landslides damaged 90 percent of the village. She estimated one in every five of the 300 families are still living in makeshift homes.

The stories are similar in Murali Para, a mostly indigenous community. Majupru Marma said she barely survived when neighbours pulled her from the mud. She’s still repairing the damage: her family’s concrete home was destroyed, and the mudslide left her farm plot clogged with unproductive sand and clay.

“We’ll never be able to grow crops here,” she said. 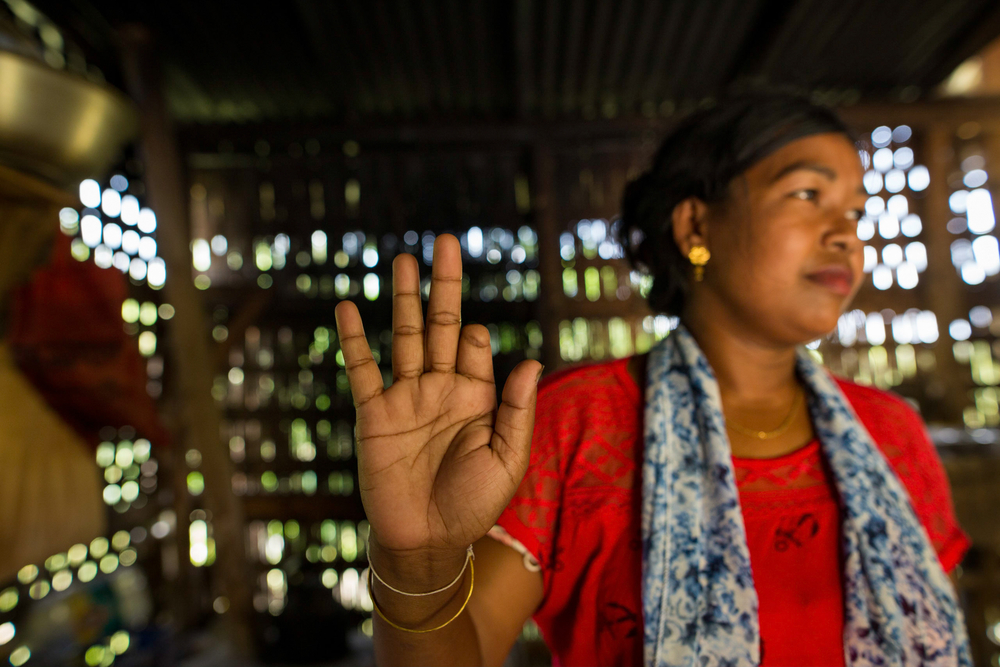 Masi Jai Marma, 29, who lives in a mostly indigenous community near Rangamati town, survived the June 2017 landslide but lost a finger.

Researchers say landslides have become increasingly dangerous as the most risky areas grow more populated. There were no recorded casualties when significant landslides hit the three hill tract districts, including Rangamati, in 1968, 1970, and in the 1990s.

But the landslides turned deadly in 1999, peaking with dozens of deaths in 2007 and in 2017, according to Bayes Ahmed, a lecturer with the Institute for Risk and Disaster Reduction at University College London who has studied the home-building practices of settler and indigenous communities.

He said indigenous communities generally view the hills as part of their cultural identity. They’ve known for generations how to live in the mountains, building raised homes using lightweight material like bamboo, and constructing in stages against gentler slopes rather than cutting into the hill.

“The tribal people living in the remote and rural hill areas experience few or no landslide disasters,” said Ahmed, who believes preserving and promoting this indigenous knowledge can help reduce disaster risk.

But local aid workers say indigenous communities are losing some of these traditions as they too shift toward urban areas.

Living Stone Chakma, who heads monitoring and evaluation at Green Hill, an indigenous-run NGO in Rangamati, said many of the indigenous families left their homes in remote parts of the district because remnants of the former insurgent groups that once battled the military now clash with each other.

Internal migration, he said, “has gained momentum in the past decade”.

Both indigenous communities and Bengali settlers have clear-cut the surrounding hillsides, he added.

Prasenjit Chakma, who manages a project in the area for the United Nations Development Programme, said indigenous people are also moving to Rangamati in search of education and job opportunities, in addition to escaping the security concerns back home.

"In the past, all knew how to make a stilted house,” he said. “They have forgotten this as they've moved to town areas.”

And the materials used to make traditional homes – bamboo and a specific type of grass – are also becoming increasingly scarce, which raises the cost of construction. 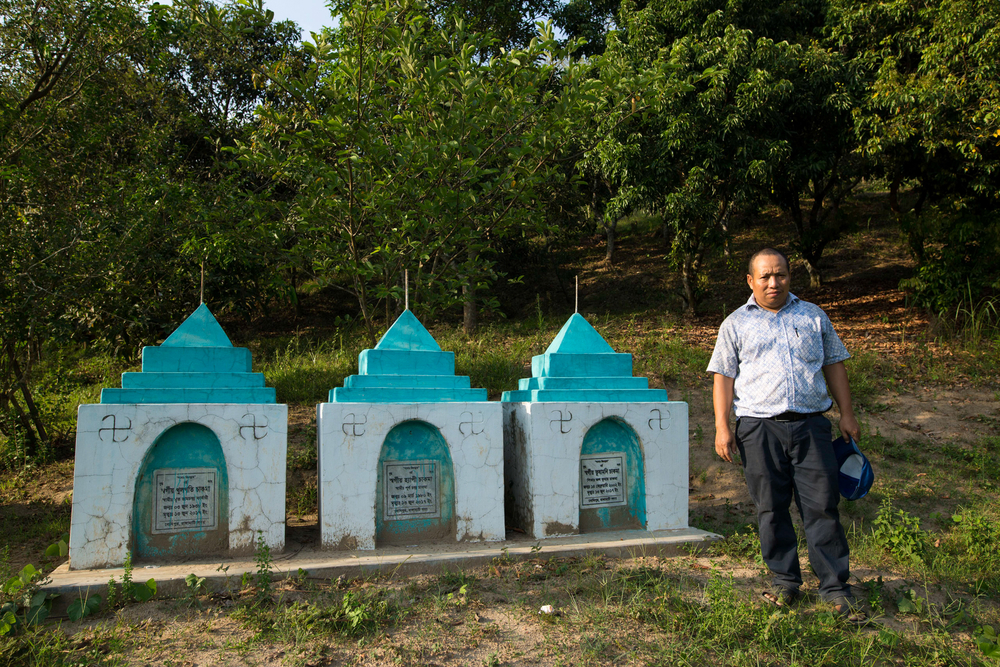 Zakir Hossain Chowdhury/TNH
Local NGO worker Purna Chandra Chakma lost his wife and two other relatives in a landslide. He says it has become too expensive for indigenous communities in the area to build homes using traditional materials.

Purna Chandra Chakma, who works for the Centre for Integrated Programme and Development, a local NGO, said landowners have cut down natural bamboo areas in favour of more valuable teak plantations.

Climate change is also feeding landslide risk. The June 2017 landslides came after days of condensed, extreme rainfall: NASA recorded 510 millimetres in the area over a three-day span – nearing levels typically seen over an entire month in June or July.

Climate modelling for the region suggests precipitation may grow more concentrated, unleashing more rain in a shorter time frame, said Atiq Rahman, a scientist who co-authored the vulnerability chapter in a landmark report by the UN body assessing climate research.

Landslides, he said, are “a combination of human activities and natural phenomenon, accentuated by climate change.”

SM Shafi Kamal, the deputy district administrator in Rangamati, said authorities are focused on raising landslide awareness among some 13,000 people believed to be the most at risk.

"We can't relocate every person."

But he said authorities still face a quandary: the district doesn’t want to encourage further expansion of risky settlements by building retaining walls that might make the hills safer, nor can it afford to permanently resettle everyone.

"We can't relocate every person," he said.

Islam of Dhaka University said Bangladesh needs to treat landslides as it does other deadly calamities. Bangladesh is a global “role model” for its early warning programmes for cyclones and floods, and yet it’s poorly prepared for landslides, he said.

Ahmed of the Institute for Risk and Disaster Reduction said local authorities should build landslide shelters, which would operate in the same way as the country’s lauded cyclone warning and shelter systems.

Dedicated disaster shelters are common in cyclone-vulnerable coastal areas, but there were none in the hill tracts in 2017 and still none today.

“We had to accommodate 4,000 people in sensitive government establishments like radio and television stations,” said Mohammad Manzarul Mannan, then district administrator.

This monsoon season, the district has designated 21 public buildings as emergency landslide shelters, though this may be inadequate given the town’s population of roughly 35,000.

Conflict kept indigenous groups and settlers divided for years. But in the hillside settlements around Rangamati, both communities are now linked by the risks they face as the monsoon season begins.

In May, Cyclone Fani pummelled eastern India and parts of Bangladesh. It mostly missed this part of the country, but some here lay awake at night, memories of the 2017 landslides rushing through their minds.

"When I see clouds in the sky,” he said, “I become mentally restless.”

(TOP PHOTO: People in this settler community near Rangamati town have built their homes against parts of a hillside. District authorities say the area is a high-risk landslide zone.)