Iraq has defeated so-called Islamic State, its displaced citizens are heading home, and the country is slowly rebuilding after more than three years of war. But barely a year after the liberation of Mosul, millions of Iraqis still depend on aid, and the agencies that provide it say donors are losing interest in funding them.

According to the UN’s count, 8.7 million Iraqis need assistance this year, down from 11 million in 2017. To account for this 23-percent drop in needs, the UN has asked for less money for the emergency-related response it coordinates in Iraq: its 2018 appeal is for $569 million, down from $985 million (not including a separate appeal for the fallout of the Mosul military operation).

For the time being, the reduced ask is the best-funded UN appeal in the world: 64 percent, or just over $362 million, has been given for this year. But aid agencies are still nervous.

“Donor fatigue in Iraq is already kicking in,” said Alexandra Saieh, advocacy manager at the Norwegian Refugee Council in Iraq. “Humanitarian funding for Iraq is becoming more difficult to secure, and will likely decrease in the coming years.”

Kate Pond, spokeswoman for UNHCR, the UN agency that assists refugees and internally displaced people (IDPs), pointed out that the international community had provided “immense support” as a million people were displaced during the nine months of fighting for Mosul – sending an extra $238 million.

Waning US media coverage for Iraq

The headlines are less dramatic these days, but many Iraqis still need help.

“Now, a year on from the end of the battle for Mosul, the situation faced by Iraqis has changed,” said Pond. “Although different, the situation is no less challenging for people trying to rebuild homes and communities and restart their lives. At the same time, global interest is waning, support from humanitarian actors is decreasing, and donor priorities are changing.”

Both the UN and the Iraqi government believed that people who had been sheltering in rented apartments, abandoned buildings, and displacement camps would head home soon after IS was kicked out of the country.

In fact, the first sentence of the UN’s 2018 Humanitarian Response Plan, the document that guides its funding and planning, reads: “the majority of displaced families are expected to return to their families by the end of the year.”

Iraqis are returning – 3.8 million people have gone home out of a total of six million displaced since 2014. But, stresses Wendy Taeuber, Iraq country director for the International Rescue Committee, not at the pace humanitarians had anticipated. This means more people than originally thought will need help for longer periods.

“It is increasingly clear that the number of IDPs expected to return home in 2018 was unrealistic,” Taeuber told IRIN. “Many displaced families are unable or unwilling to go back and will need support to integrate or settle elsewhere in the country. Until a lasting solution to their displacement is possible, they will continue to need humanitarian assistance.”

In some cases, Iraqis are arriving back at camps on their own accord, finding life in their hometowns untenable, with their savings gone and job opportunities few and far between. In UNHCR-run camps south of Mosul city, “new arrivals consistently outpace returns,” according to Pond.

Donors aren’t necessarily losing interest in Iraq as a whole, aid officials say, they’re just looking to direct their efforts towards reconstruction rather than emergency aid.

“Many donor governments are shifting their focus to stabilisation and early recovery efforts in Iraq, effectively marking a shift from investing in people to investing in infrastructure,” said the NRC’s Saieh. “The latter is important, but will not work without the former.”

It will cost money, too. In February, the UN said it was seeking $482 million for the first year of its two-year Resilience and Response Programme, which is intended to “fast-track the social dimensions of reconstruction,” plus $568 million to “help stabilise high-risk areas” in Iraq.

Iraq’s leaders are also keen to look towards the future. At a February conference on reconstruction in Kuwait, they emphasised that the country was open for investment, and they received $30 billion in pledged loans and credit. That’s far short of the $80 to $100 billion it’s estimated Iraq will need to rebuild in the next five years, but it’s a start.

Sattar Newrouz, spokesperson for Iraq’s Ministry of Displacement and Migration, said that while Iraq “highly values” the assistance it has received in the past few years, it had been “expecting more support” from the February conference.

He added that other humanitarian crises in the region – he mentioned Yemen, Syria, and Libya – may have negatively impacted donations to Iraq, but said he believed the government still had strong relationships with donor countries. 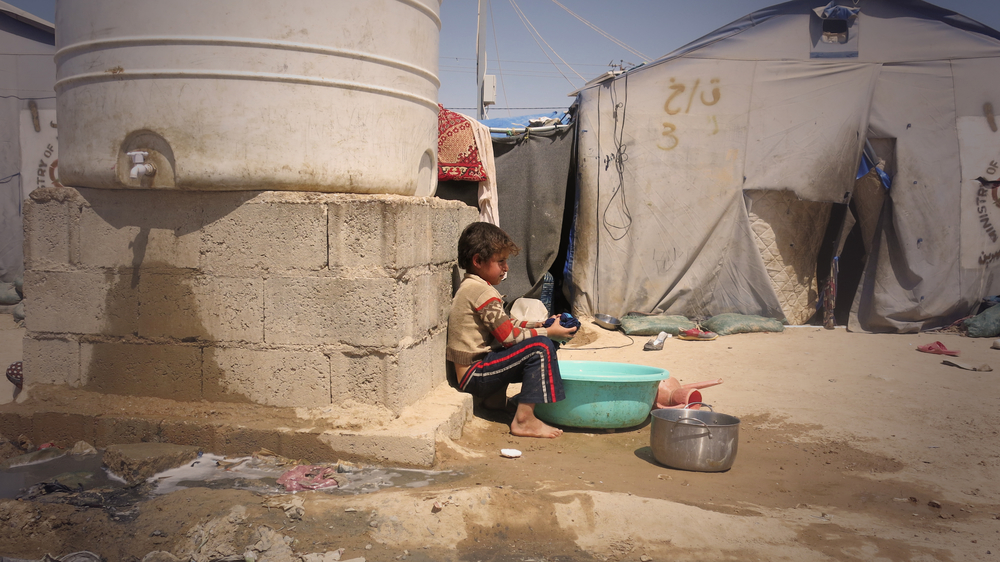 While accepting that development and reconstruction are necessary for Iraq’s future, many humanitarians are keen to point out that immediate needs must still be met.

In addition to two million still-displaced Iraqis, the country hosts more than 250,000 Syrian refugees. Among those who most rely on emergency assistance are “highly vulnerable groups, like female-headed households, the elderly, and the disabled,” said Pond.

In the camps of Anbar province, where nearly 80,000 people are still displaced, needs are clear. While some people complain that services need improvement (water pools under tanks, latrines do not provide enough privacy for young women), they also say they wouldn’t survive if it were not for the rations they receive from aid agencies.

“Cities like Mosul are in ruins and, although the first steps have been taken, restoring them takes time,” said UNHCR’s Pond. “People need to be able to go home, but not before services like water and electricity are fully functional, and they have jobs and homes to return to.”

For the IRC’s Taeuber, attention shifted immediately to stabilisation and reconstruction after the end of the military operation. “But Iraqis need more than buildings and roads to get back on their feet,” she said. “They need identity documents, jobs, quality education and health care, fair access to government assistance, and help finding lasting solutions to displacement.”