The slew of #MeToo sexual abuse scandals that has jolted the humanitarian sector has prompted calls for proper oversight and vetting of aid agencies and workers, and for the introduction of mandatory professional standards.

Donors have demanded new measures and reporting from grantees, and investigations have been launched by the British regulator. Critics say aid agencies operate without sufficient checks and balances and wonder why attempts to set up an independent authority, such as an ombudsman, have flopped. This, they argue, partly explains how the Oxfam scandal could happen.

Others insist that viable systems are in place, they just need to be implemented: a leading benchmark for aid agencies, the Core Humanitarian Standard (CHS), drawn up in 2014, already includes the management of risk and prevention of sexual abuse and exploitation.

“Never has it been more important to apply the Core Humanitarian Standard,” CHS Alliance Executive Director Judith Greenwood wrote in a web posting.

Over the last 20 years, international aid organisations and donors have set up a range of self-regulation initiatives for quality assurance, accountability, and common technical standards with which many major aid agencies say they comply.

A handful of donors tie compliance with standards to funding. For example, Denmark makes independent CHS verification or certification a requirement for its strategic partners, and provides funding to defray the costs of compliance. A spokesperson for the humanitarian department of the Danish foreign ministry told IRIN that agencies that have “gone through a CHS verification or certification process [are] shown to have better Protection against Sexual Exploitation and Abuse (PSEA) safe-guarding systems.”

As humanitarian aid professor Dorothea Hilhorst put it in a column published by IRIN, the problem now facing the sector is not a lack of standards, rather it’s the lack of third-party enforcement and meaningful sanctions. “The initiatives all rely on the voluntary buy-in of NGOs, who ultimately retain power to independently deal with abuse,” she wrote.

Designing a unified body of regulations and standards is difficult when so many different types of organisations inhabit the humanitarian space. International emergency aid services are offered by NGOs and charities, faith organisations, volunteer networks, social enterprises, or philanthropic projects connected to for-profit companies. More than 600 agencies received officially reported funding (mainly from governments) in 2017, according to the UN’s Financial Tracking Service (and that doesn’t include myriad smaller and informal groups).

But there is no international humanitarian watchdog, nor is there a directory of vetted aid groups. Each group is governed by an array of oversight and tax mechanisms in its home country and unevenly governed by the host country at the point of delivery. The organisations are not under a single jurisdiction, and neither are the staff; there isn’t an aid worker union.

And “aid worker” isn’t a single profession: a trauma surgeon or a water engineer may hold internationally recognised qualifications, but a range of generalist roles lack a single categorisation.

In the Oxfam scandal, for instance, it was possible for an aid worker whose conduct was questionable to be re-hired repeatedly over a 20-year period because there was no system to flag up such people and prevent their re-recruitment. But proposals for a single register of “whitelisted” aid workers, even if such a registry were legally viable, would not have stopped the re-recruitment of Oxfam Haiti manager Roland van Hauwermeiren: none of the organisations he worked with fired him, nor was he criminally prosecuted.

At the other end of the spectrum, the challenges facing smaller organisations trying to gain credibility can also feel immense.

Local aid agencies like his that are trying to break into the big leagues have “banana skins” in their internal systems that prevent them gaining credibility, he said. Chowdhury said a two-year process of getting an independent certification as a humanitarian agency, culminating in an on-site audit in late 2017, has been worth it to provide a recognised seal of approval from an independent group, and get a robust review of its procedures.

Chowdhury spoke as he was picking up a certificate from the Geneva office of the Humanitarian Quality Assurance Initiative (HQAI).The document designated Coast Trust as the 14th aid agency certified by the group – the first from the so-called Global South, or developing nations.

Using a network of independent auditors, HQAI assesses aid organisations, usually against the CHS standards. The process involves a management audit: interviewing staff, focus groups, project beneficiaries, reviewing documents and records in the field and at the agency’s offices. 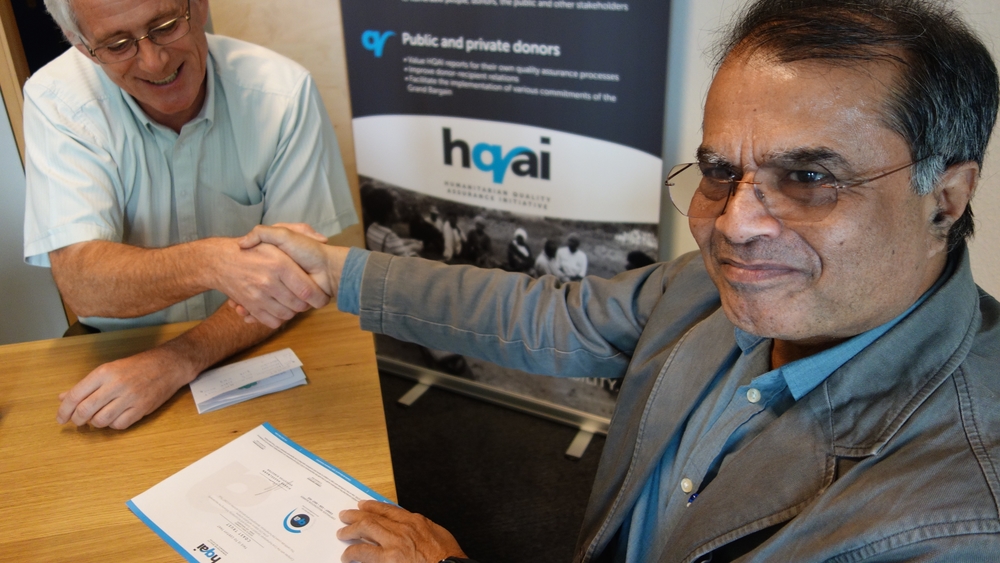 Ben Parker/IRIN
Coast Trust is the first southern NGO to be certified by the Humanitarian Quality Assurance Initiative (HQAI), an independent auditing and advisory service for relief aid agencies, based in Geneva. COAST gained its certificate in January 2018.

Over the last two years, the organisation has done about 35 audits, which Hauselmann says are designed to drive incremental improvements in adherence to the CHS standards. Because the process involves repeat annual reviews, “we can see the improvements from one audit to the other”, he noted.

A trusted third-party seal of approval can make a difference to donors who are considering whether to shift more cash to non-Western aid groups, often as part of “localisation” efforts, Chowdhury said. HQAI worked with his group to align its operations with the principles and commitments set out in the CHS. In this post-scandal era, that includes showing how an organisation can act on complaints and misconduct if and when they arise.

It’s a process that takes time, Chowdhury said, not a rapid “commando raid” by auditors. Coast Trust’s audit report included 12 “minor” recommendations, with deadlines for the group to make improvements. These included, for example, better procedures for following up complaints and data protection.

This is not unusual, said Hauselmann: an audit without findings for improvement would itself be suspect. Coast Trust’s relationship with HQAI, Chowdhury said, is similar to a partnership, but with a watchdog element. To retain their ratings, organisations must commit to annual checkups and, if standards are not kept up, the HQAI seal of approval can be withdrawn. “The teeth exist”, Hauselmann said, but “behind a smile.” In the current climate, he added, agencies are “very wary” of losing certification.

At least part of the answer to regulating aid workers may lie in the international standards and professional credential systems used by sports coaches and those who care for the elderly, according to a Geneva-based non-profit training provider and association, Professionals in Humanitarian Assistance and Protection (PHAP).

The group is beta testing multiple-choice examinations on skills, similar to exams offered in other professions. PHAP will soon offer a total of six exams, designed to confirm a candidate’s competence and suitability for specific aid jobs, (for example in cash distribution or needs assessment) and test their general knowledge of the sector as well as ethical foundations.

Angharad Laing, PHAP’s executive director, said there is no shortage of volunteers to help design and test the exams. As well as taking a “nerdy” pleasure in checking questions on their specialist areas, volunteers feel a sense of community and pride, she said, approaching the project with an attitude of: “Oh wow, lots of people have been thinking really hard about how I do my work”.

To address misconduct and underperformance, holders of credentials earned through the exams can be stripped of their professional designation after a review by a credentialed peer panel. This process is based on a system devised by the International Standards Organisation.

Laing says some job postings now specify that candidates hold PHAP credentials. Since the UK scandals broke, she said, the HR departments of major NGOs have contacted her to discuss how they could use PHAP’s services. She believes there has been an over-reliance on agencies and organisations “holding themselves to account”.

PHAP has 4,000 aid workers as current members and offers face-to-face training, webinars, and a professional membership structure. PHAP’s membership makes it one of the largest aid worker associations, although its members are only a fraction of the amorphous aid community: consultancy Humanitarian Outcomes estimates that there are 450,000 humanitarian aid workers worldwide.

In addition to organisational accountability and coherence, and individual competence and ethics, efforts toward stronger regulation in the aid sector must address technical issues.

Sphere, a donor-funded standards organisation formed in 1997, brings together practitioners and experts to set minimum standards for quality humanitarian response, including targets for planning shelters, building latrines, or setting up vaccine campaigns.

The group considers issues such as what is the acceptable number of people per toilet in emergency environments (answer: 20), or reminders not to distribute powdered milk.

“The teeth exist”, Hauselmann said, but “behind a smile.”

The Sphere Handbook wraps these technical materials with the CHS (of which it was a co-author) and an overarching “humanitarian charter”. The fourth edition of the omnibus publication, available in about 30 languages, will be issued later this year, said executive director Christine Knudsen.

Standards in general are not a barrier to new or small NGOs and newcomers to the sector, Knudsen insisted. In fact, she added, they provide a framework for good practice and comparability.

Knudsen pointed out that standards and certifications only demonstrate whether an organisation has the structure to do quality work. They are “an enabler, rather than a predictor” of quality, she said.

Hauselmann of HQAI said that previous attempts at third-party audits and independent assessments had suffered because of a perception that they are “a tool to sanction”. Instead, he stressed, they should be seen as one of the “most important drivers for improvement”.

After revelations of sex-for-aid abuses in West Africa in 2002, there was a “moral panic”, and new initiatives were established, he wrote in an online comment on IRIN. Gradually, however, “business as usual resumed and a growing sense of impunity and hubris grew, and with it the ever-increasing danger of unmanaged moral hazard that has now been blown open.”