This article is part of our in-depth coverage. Read more like this...
KINSHASA

Relations between the government of the Democratic Republic of Congo and international aid agencies have hit a “low point” since the government refused to attend its own donor conference earlier this month, humanitarian experts and officials here and in Geneva said, elevating concerns that relief to more than 13 million people could become a political bargaining chip, ahead of elections now slated for December.

After its no-show at the Congo fundraising conference in Geneva on 13 April, President Joseph Kabila’s government upped the stakes last week by declaring it will set up a new Humanitarian Fund Management Agency to “manage, monitor and control humanitarian funds and work to channel all financial flows affecting the humanitarian sector” in the country.

"Money has been raised. The DRC government must now be involved in its management. If not, there will be serious consequences," warned Congolese Foreign Minister Léonard She Okitundu in an interview with local media.

The 13 April donor conference, attended by 54 countries, raised $530 million of the $1.7 billion the UN says is required to meet the needs of 10.5 million people targeted for assistance, including 4.5 million displaced by conflict, many of them suffering from disease and malnutrition.

Three weeks before the conference, however, the government announced it would boycott, with Congolese Acting Prime Minister José Makila accusing the UN and the international NGO community of propagating a "bad image of DRC throughout the world".

The government has not elaborated on what the “serious consequences” might be for aid agencies or donor governments that don’t cooperate with its proposal to manage funds. It is not yet clear how the fund is expected to work, but experts on international aid said it is unlikely that donors would use the Congolese government as a conduit for large sums of aid money.

“Can you image the United Kingdom government saying the money they were supposed to send to UNICEF will instead go to the Congolese government to manage?” a senior UN staffer in Kinshasa working closely with the relief effort said. “We are not talking about a normal government. Nobody will send them money to address the humanitarian crisis.”

Few aid workers or officials with international donors and humanitarian organisations who spoke to IRIN would agree to be named for fear that public statements might jeopardise their ongoing work in the country.

But, in a series of interviews with several people close to the matter, serious concerns were raised over both the long- and short-term impact that tensions between the government and the aid sector could have on providing assistance to Congo’s 13.1 million people in need. One UN official, speaking on condition of anonymity, described relations as at a “low point”.

Congo has suffered from decades of conflict and political dysfunction. As unrest has continued to escalate in North and South Kivu, Tanganyika, Kasai, and Ituri, the number of Congolese requiring humanitarian assistance has doubled since 2014, reaching the same overall numbers as Syria.

Analysts and aid workers point to domestic politics as the main reason behind the government’s boycott of the Geneva donor conference.

Kabila, who has faced international condemnation since his refusal to stand down from power in December 2016 (several top officials have also been sanctioned by the European Union and the United States) had little to gain from an event focused on the ills of his country. He has vowed not to seek re-election, but voting has been repeatedly delayed and the police have cracked down hard on political protests that have turned deadly in the capital, Kinshasa.

Kabila’s government views a negative portrayal of the country’s humanitarian situation as a gift to the opposition, in advance of the December elections.

The government has disputed the data used to assess the situation. Congo's Minister of Humanitarian Affairs Bernard Biango, for example, points to only 230,000 internally displaced people nationwide, compared to the UN’s estimate of 4.5 million.

Kinshasa has said it rejects the UN’s assessment of the humanitarian crisis in Congo, in particular the designation last October of parts of the country as a ‘Level 3 emergency’ – the gravest classification possible – putting the country on a par with Syria and Yemen. The designation was downgraded early in April, a move the UN said was routine, but one that was criticised by some who saw it as a misguided gesture designed to mollify the Congolese government.

As well as contesting the scale of the crisis, two people within the UN said the Congolese government was aggrieved by the decision to invite it to the conference as a guest rather than as co-host and organiser. “It may have been a mistake,” one said.

A Security Council briefing on 19 March by UN relief chief Mark Lowcock, which linked the humanitarian crisis in Congo to the political crisis in Kinshasa, may have also “angered the government”, that same person said. 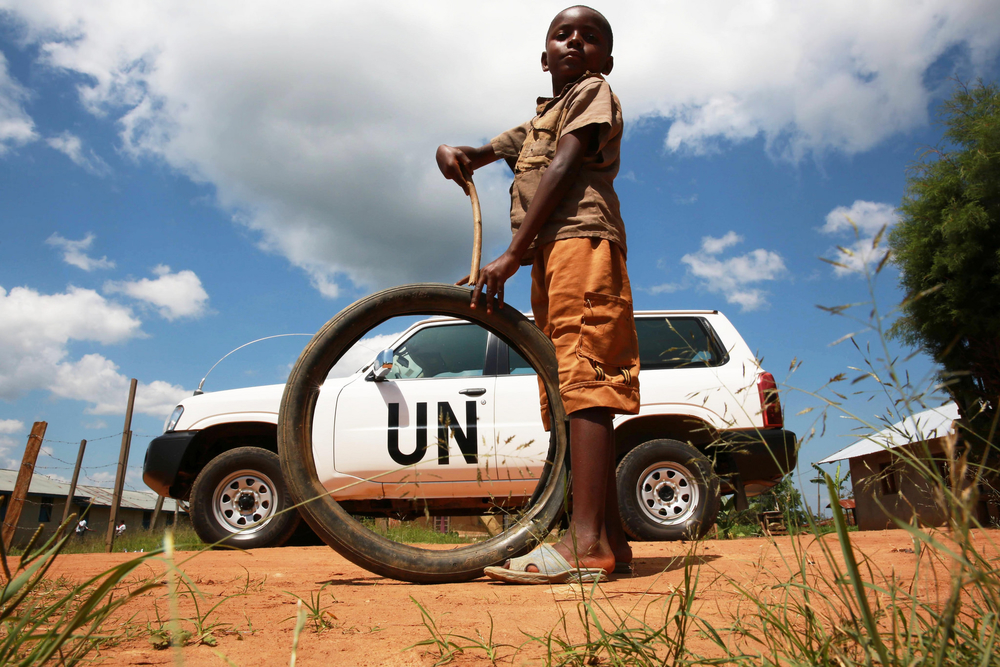 What impact any lasting discord between the Congolese government, donor countries, and aid agencies will have on the relief effort, spread across several insecure regions in the vast country – around two thirds the size of Western Europe – remains to be seen. Earlier disagreements have already had some effect, however.

After a diplomatic spat that began in January, when the Belgian government announced it would carry out a “fundamental revision” of cooperation with the DRC until “credible elections” were held, Kinshasa threatened local and international NGOs that received money from its former colonial power.

At the pledging conference, Belgium said it would contribute up to 25 million euros to “continue expressing its solidarity with the Congolese people”, but Foreign Minister Okitundu has said NGOs that receive this money will not be authorised to work in the DRC.

Analysts said that strained relations could impact aid workers in other ways, too.

NGOs in the DRC regularly confront complicated visa and registration procedures, for example.

Recent statements by Congolese officials “clearly signal that this may worsen, and that they are trying to tarnish the reputation of aid agencies,” said Alexandra Lamarche, advocate for sub-Saharan Africa and peacekeeping for Refugees International. “Bureaucratic impediments could increase and become more crippling and even dangerous.”

For now, however, humanitarians working in the field said they have not noticed any changes. “Local authorities tend to appreciate what we are doing,” one aid worker said, adding: “They don’t receive any help from Kinshasa.”

What would make a difference to people in need is more funding reaching aid programmes on the ground. Before the Geneva conference, still relatively early in the calendar-year process, donors had pledged only 13 percent of the funds requested by the UN, compared to 23 percent for Syria and 46 percent for Yemen.

Some observers suggested the absence of the Congolese government reduced the amount of money raised in Geneva, although it was never expected to near the $1.7 billion target. “All the main crises go through the same donors: if I am a donor and have three conferences, and one of the countries is playing smart and doesn’t want to participate – I’ll keep my money and give to somebody else,” the senior UN source in Kinshasa said.

Veronique Barbelet, a fellow at the London-based Overseas Development Institute, said there was an anxious atmosphere, especially among some local aid agencies working in Congo, for example in places like South Kivu, from where resources have been diverted to help emergencies elsewhere in the country. “It’s not back to square one, but we are seeing serious implications,” she said. “Humanitarian organisations were already thin on the ground.”

Stephanie Wolters, head of the peace and security research programme at the Institute for Security Studies, said the Congolese government’s decision to boycott the Geneva conference was “grotesque political posturing”.

“A responsible government,” she said, “would have welcomed the opportunity to access additional resources to assist its own population.”