An estimated 150,000 people are in flight following Turkey’s capture of the northern Syrian city of Afrin, part of a wider Kurdish enclave of the same name. It is unclear if or when they will be able to go back home.

For the past two months, Turkish forces and allied Syrian rebels have been fighting the YPG – a Syrian Kurdish offshoot of Turkey’s Kurdistan Workers’ Party (PKK) – for control of the Afrin enclave.

Violence had already displaced tens of thousands in the enclave, but when YPG troops finally permitted people to leave as they pulled out of the city over the weekend, a new wave of civilians flooded out towards areas still held by the YPG or controlled by the government of Syrian President Bashar al-Assad.

“We are really witnessing a humanitarian crisis with the ongoing influx of thousands of people fleeing the fighting who are sometimes forced to sleep in the open with no shelter, no food, no water, and no access to medical care,” Ingy Sedky, a Damascus-based spokeswoman for the International Committee of the Red Cross, told IRIN on Sunday.

The Kurds and the Kremlin

For much of Syria’s seven-year war, the YPG, which stands for People's Protection Units, have battled Arab insurgents for control over Kurdish parts of northern Syria, while in an uneasy, on-off truce with al-Assad's forces. Since 2014, the group played a major role in defeating the so-called Islamic State in and around Raqqa, with backing from the United States.

Turkey considers the PKK, which has been fighting a guerrilla war against the state for decades, to be a terrorist organisation. Keen to break up a PKK-linked Kurdish powerhouse near its borders, on 20 January it sent special forces across the border to assist a collection of Syrian rebels taking on the YPG.

Though the fighting itself was a brute force contest in which Turkey proved superior to lightly armed Kurdish guerrillas, the intervention was also tied up in a complex set of political deals.

Russia’s role was pivotal. While the YPG is a US ally in northeastern Syria, it has worked with Russia in Afrin – last year, Moscow stationed a symbolic monitoring force there to prevent Turkish incursions.

But an under-the-table deal between Ankara and Moscow appears to have ensured that the Russians would not get in the way of the Turkish intervention: monitors were moved aside; the Kurds cried foul, to no avail.

Despite his troubled relationship with the YPG, al-Assad sees Turkey as a far more capable and dangerous enemy. To ward off the Turks, the Syrian president reportedly asked that the YPG should place Afrin under his control, calculating that this would force Turkey to confront not just him but also his Russian ally. Al-Assad also appears to have sent anti-tank missiles to Afrin and helped the YPG resupply via government-held Aleppo.

But the YPG reportedly refused to relinquish its control over Afrin, and, more importantly, Russia refused to back al-Assad against Turkey in Afrin, forcing the Syrian president to scale down his ambitions. Instead of dispatching a formal Syrian Arab Army detachment, al-Assad merely green-lighted the arrival on 21 February of local militias from two nearby pro-government towns, Nubul and Zahra. The towns had previously been rescued by the YPG when under siege by Turkish- and US-backed Sunni rebels, and militia leaders now wanted to repay the favor.

Saleh Muslim, a Syrian Kurdish leader who is allied with the YPG, told IRIN in a 6 March interview that Russia’s role was paramount. Asked as the fighting was ongoing what could keep Afrin from falling into Turkish hands, he replied: “Put pressure on Russia. They are the only force that can stop this.”

The other thing that could have saved Afrin, Saleh Muslim said, was if the YPG was provided with anti-aircraft missiles. “Then we’ll stop them in one minute,” he said, acknowledging with a wry smile that it would never happen.

In the end, Russia faced little pressure and never changed its position. A 24 February ceasefire decreed by the UN Security Council should theoretically have halted the fighting, but it was ignored by almost all parties.

Thrown to the wolves by its only powerful defender in Afrin, the YPG could not hold out for long. By early March, all that remained was the question of whether to pull out to save lives or mount a hopeless last stand to score political points.

“The Turks broke the YPG’s outer defences about two weeks ago and ever since then the question was whether the YPG would fight inside the city or withdraw,” Aaron Stein, an expert on the Turkish military and a senior fellow with the Atlantic Council, told IRIN. “They chose the latter, which spared the city from urban conflict.”

That decision likely saved many lives, but Afrin’s civilians suffered tremendously during the preceding weeks. Kurdish homes are reported to have been looted by rebels while Turkish air raids pummelled civilian areas.

The Turkish military flatly denies causing any non-combatant deaths and says all operations were “conducted without harming any civilians, innocent people, and the environment”. Plenty of evidence has emerged to the contrary.

Airwars, a London-based nonprofit that collects evidence on airstrike casualties in Syria, has published a dossier listing numerous cases in Afrin. Separately, a pro-YPG news agency claims 289 civilians have been killed by Turkish forces and their allies since 20 January, including 43 children.

Whatever the actual number, this rural, isolated, and underdeveloped region’s inability to handle large amounts of casualties has made matters worse.

“With only four hospitals currently operating in the area, health facilities and personnel are overwhelmed and struggle to cope with the increase in the number of casualties,” the ICRC’s Sedky said.

Just before the Turkish forces and allied Syrian rebels entered the city, Turkish fighter planes reportedly bombed Afrin’s main hospital on Friday in an attack said to have killed 16 people.

The Turkish military denied the hospital had been hit, but photographic evidence confirmed the building had been damaged. 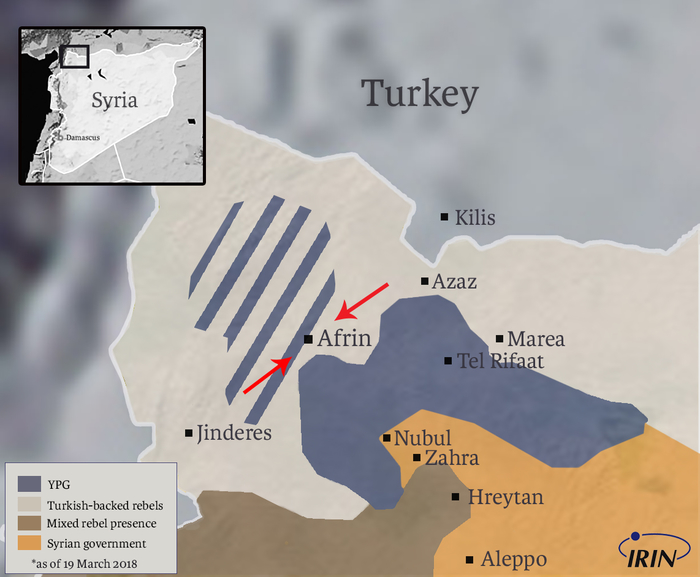 In the midst of this mayhem, huge numbers of Kurdish civilians have been fleeing their homes.

The UN estimates that nearly 100,000 civilians were displaced from Afrin before the city fell on Sunday. Kurdish officials and humanitarian sources put the number at more than 150,000, out of the enclave’s total estimated population of 323,000. Most had gathered in the district’s capital, which filled up with desperate civilians even after water supplies were cut off in early March.

Until this weekend, most civilians had nowhere to run but the city centre. The UN reported that Afrin’s YPG-backed authorities closed all exits for civilians wishing to leave the enclave.

Syrian army checkpoints near Nubul and Zahra were also said to be turning back those civilians who did manage to escape, by either sneaking out or using YPG connections. Other UN reports said pro-Assad fighters were charging money for the right to pass into government-held territory.

UN sources confirmed to IRIN that Kurdish civilians were forcibly kept inside the enclave until the last days of the offensive. Only when Afrin’s defences neared collapse did the YPG decide to evacuate the city.

“In Afrin, both the YPG and Syrian government forces were preventing movement, but now we have a massive displacement towards Tel Rifaat,” Linda Tom, a Damascus-based spokeswoman for the UN’s emergency aid coordination body OCHA, told IRIN by email on Saturday, before Turkish troops entered the provincial capital. Tel Rifaat is a majority-Arab city east of Afrin where YPG fighters remain stationed alongside Russian monitors, amid rumours that the YPG will hand the area to al-Assad’s government.

With Afrin now having slipped from Kurdish control, 100,000 people are estimated to have arrived at Tel Rifaat in a matter of days, with additional thousands fleeing to other areas in the Afrin and Aleppo areas. Though the ICRC and the Syrian Arab Red Crescent were distributing mattresses, blankets, and kitchen kits in Nubul and Zahra, on the road between Afrin and Aleppo, aid groups seem overwhelmed by the influx.

Uncertain fate for the displaced

Turkish authorities now seem to be working to put a friendly, local face on their presence. But Afrin has a decades-old reputation as a pro-PKK stronghold, and many of the displaced civilians may be unwilling – perhaps unable – to live under Turkish control, especially given Ankara’s discriminatory policies against its own Kurdish minority.

A Syrian civilian council is being formed to govern the area, organised by Turkey and Syrian dissidents, including Abdelaziz Tammo, a Syrian Kurdish opponent of the YPG and PKK. “This is a liberation,” Tammo told the New York Times, arguing that the YPG “took control [of Afrin] by force of arms and forced the people to live under their rule.”

Saleh Muslim insisted that such reports amount to no more than slander by “individuals” based in Turkey, but YPG-backed authorities have harshly repressed rival Kurdish groups since seizing control over northern Syria in 2012.

Tammo’s council seems intended to form the nucleus of a new civilian administration under Turkish oversight. But in practice, in so far as Syrians will exercise any real control over Afrin, it is the armed groups that will dominate civilians – not the other way around.

The Syrian rebels backing the Turkish forces are a collection of conservatively religious or Islamist Sunni groups that operate together under the Free Syrian Army moniker. They include token Kurdish units but are otherwise made up of Arab and Turkmen fighters, which is a troubling sign in a northern Syria pulsating with ethnic tension.

The YPG and its allies are predictably scornful of Afrin’s new masters, slamming them as little better than al-Qaeda.

“What they refer to as the Free Syrian Army is really jihadists,” Saleh Muslim told IRIN. “Look at the Sultan Murad Brigade set up by Turkey,” he said, referring to an Ankara-backed, religiously inclined Turkmen militia that played a leading role in the Afrin offensive. “That’s your Free Syrian Army? No, the game is out in the open now.”

This is hardly a characterisation that the rebels or their supporters would agree with, but Saleh Muslim’s view may well be shared by many of Afrin’s displaced villagers, currently seeking shelter in nearby cities or hiding in the mountains.

Tammo, the anti-YPG politician, has called on Kurds to return home and join the new Turkish-backed administration. But rebels are now looting shops and homes in central Afrin and it remains unclear how many could follow his advice, or would want to live under Turkish rule by proxy.

With the YPG vowing to carry on guerrilla-style war in Afrin, perhaps supplied with arms and a safe haven by al-Assad, it also remains to be seen how governable the area will be for Turkey and its militias.

As Newroz, the Kurdish new year, approaches on 21 March, many of the civilians scattered across northwestern Syria will see little cause for celebration.

(TOP PHOTO: Civilians sit in the back of a truck as they flee the city of Afrin in northern Syria on 18 March 2018. CREDIT: Bulent Kilic/AFP)

After Afrin: No Safe Haven 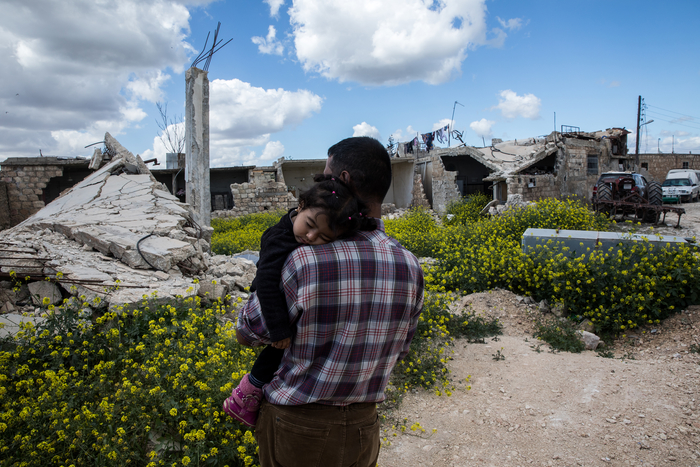 Afshin Ismaeli/IRIN
MAHATAH, SYRIA: In villages like this one, where a father and his daughter stand outside their new home, spring wildflowers and other overgrowth may conceal explosives.
Share this article
Join the discussion