Widespread abuses. Rampant impunity. Forgotten victims. Afghanistan was just the kind of case that the founders had in mind when they set up the International Criminal Court to bring powerful people to justice.

More than 15 years later, prosecutor Fatou Bensouda has asked judges for permission to open an investigation into war crimes and crimes against humanity in the country. But with the government, militants and US forces in the prosecutor’s sights, is the ICC promising more than it can deliver to the countless victims who have suffered decades of violence and abuse?

“It’s an important first step in the direction of justice that has eluded victims for a long time in Afghanistan, but it’s definitely going to be hard,” said Param-Preet Singh, associate director of the international justice programme at Human Rights Watch. “The ICC is going to face roadblocks to cooperation everywhere it turns.”

Contemplating what may be its toughest case to date isn’t a process the ICC has taken lightly. The court has been deciding whether to launch a full investigation for more than a decade. Bensouda finally announced last November that she had asked judges in The Hague to approve an investigation into crimes by the Taliban, the Afghan National Security Forces, the US armed forces and the CIA.

Judges have given victims until 31 January to submit their views on whether the court should get involved. After this, a decision on whether to allow the investigation may take several months.

Wida Ahmad, director of the Kabul-based Social Association of Afghan Justice Seekers, says her organisation is one of those gathering victims’ opinions before the deadline – a process complicated by the vast landscape in Afghanistan’s remote rural regions.

Ahmad welcomes a possible investigation but says many victims – particularly those in villages – are sceptical, having been let down by promises from international organisations in the past. “People have doubts about the ICC,” she said. “They’ve had bad experiences with the international community, NATO, the Americans. They see foreign organisations as actually committing crimes rather than prosecuting them.”

The potential case is a bold one – it would be only the second for the ICC outside Africa, where the court has become highly unpopular. Burundi has recently withdrawn from the court and South Africa is threatening to follow.

If Bensouda’s Afghan investigation is approved – and many analysts agree it will be – it would be the first to look into abuses allegedly committed by US forces and by the CIA at clandestine detention facilities in Poland, Romania, and Lithuania. The United States is not an ICC member but Afghanistan is – giving the court the right to investigate war crimes committed on its territory after 1 May, 2003.

The ICC is a court of last resort, only stepping in when a country is unable or unwilling to prosecute. Human Rights Watch points to a US investigation into CIA abuse closed without the Justice Department bringing any charges.

Analysts agree that the United States will never cooperate with an ICC case against its armed forces, meaning Afghan victims won’t ever see an American in the dock at The Hague. There have also been dire warnings that a confrontation with the United States will hurt the fledgling court – already weakened by African disapproval and under fire for mistakes it has made in previous prosecutions.

However, Mark Kersten, a fellow at the Munk School of Global Affairs and the deputy director of the Wayamo Foundation, says fear of confronting a major power is no reason for the ICC not to take on the case.

“There's no one on this planet that thinks the US will cooperate,” Kersten said. “But the vast majority of criticism and blame for that will be placed at the feet of Washington not the ICC. This is brave and courageous – exactly the kind of thing the ICC was supposed to investigate.”

Alex Whiting, a professor at Harvard Law School and a former senior official in the prosecutor’s office, says the ICC is in a difficult situation – which is perhaps why it took 10 years to bring its case to judges. 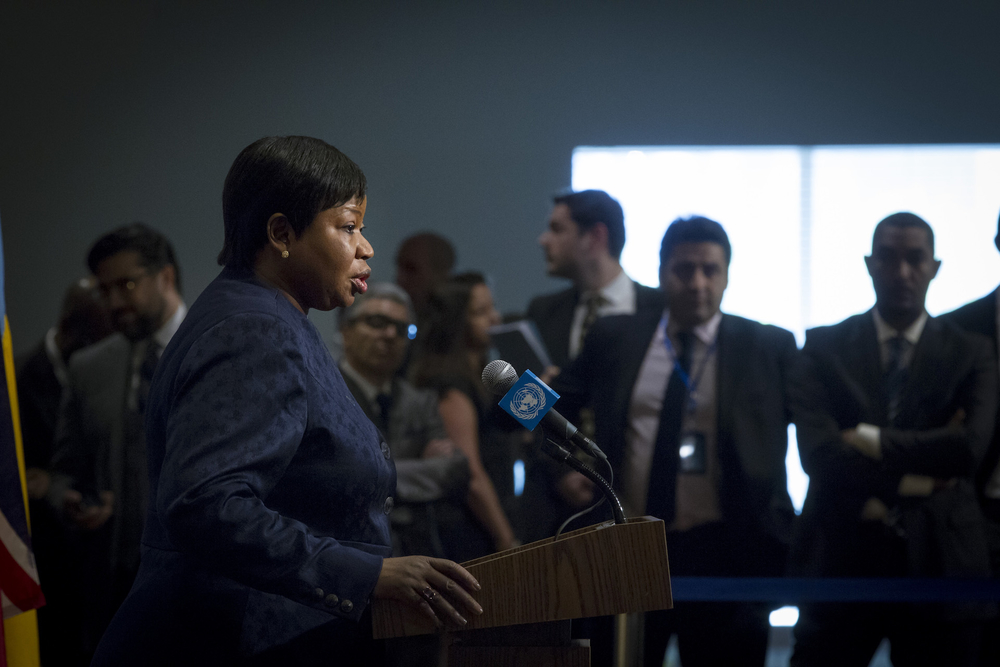 Loey Felipe/UN Photo
Fatou Bensouda, prosecutor of the International Criminal Court, speaks to journalists after a briefing at the UN Security Council in May 2016.

With the Afghan government as one of its targets, getting staff into the country could be the ICC’s first challenge if an investigation proceeds. Whiting says ICC cases investigated from the outside – such as the one launched in Sudan’s Darfur in 2005 – are inevitably weaker than those where investigators can visit crime scenes and speak to witnesses in person.

“It’s not impossible. Evidence leaves the country. Witnesses leave the country,” Whiting said. “But it’s going to be an enormous effort to collect evidence. If they do manage to collect enough evidence to charge somebody, then getting their hands on that person is going to be difficult. It’s hard to see that they are going to have much success at all.”

Martinets, migrants, and militants: The drawn-out saga of Libya and the ICC

With little support expected from the Afghan government, the ICC is relying on member states to rally behind the investigation and pressure politicians to cooperate, including those in Pakistan, where some Taliban leaders are based. However, member support has been patchy in the past with countries like South Africa even hosting ICC fugitive Omar al-Bashir, the president of Sudan wanted for war crimes in Darfur.

Like the United States, Afghanistan has made little effort to prosecute senior officials for crimes including torture, though the country has introduced war crimes into its penal code and last March passed an anti-torture law.

With her government failing to hold war criminals to account, Ahmad, the director of the Kabul-based justice-seeking organisation, believes the ICC is the victims’ only hope for justice.

“The government won’t investigate its own,” she said. “In our own government, we have the criminals who have committed the crimes.”

Human Rights Watch’s Singh hopes the ICC will be a catalyst for domestic prosecutions – particularly those occurring before the court’s 2003 mandate – but warns victims of a long road ahead.

“They are starting from less than zero and trying to infuse the political landscape with the idea that justice based on facts and law and evidence is possible,” she said. “It is going to be a long, long road riddled with disappointments. They are trying to shift expectations from impunity to accountability.”

(TOP PHOTO: Hasibullah, 20, a wounded employee of the Intercontinental Hotel, gets an X-ray scan at a hospital in Kabul on 22 January, 2018, following an attack on the hotel. At least 22 people died when Taliban militants slaughtered guests at the Kabul hotel, Afghan officials said. Wakil Koshar/AFP)