Zimbabwe is expected to harvest 2.1 million metric tonnes of maize this year after good rains followed successive El Niño-induced droughts. For the first time in many seasons the country will be able to feed itself and not require commercial imports or food aid. But is this the result of good fortune or good policy?

The Zimbabwean government is convinced it has found the secret to food security after the biggest maize harvest since a controversial land reform programme was launched nearly two decades ago. It’s ignoring the critics who say success was mostly due to the better weather and who worry about the scheme’s gaps and longer-term returns.

New President Emmerson Mnangagwa is doubling down on “command agriculture”, a major private sector-backed subsidy programme in which farmers are provided with seeds, fertiliser, fuel, and chemicals – on loan, with repayment made with a portion of the harvest the following season.

Some 50,000 small-scale and commercial farmers working 160,000 hectares of maize in “high potential” areas benefited from the programme and are expected to sell a hefty five tonnes per hectare back to the state-run Grain Marketing Board as part repayment on their loans.

Simpson Mukari from rural Goromonzi, 50 kilometres southeast of the capital, Harare, said he harvested an average of seven tonnes per hectare after being provided with fuel and tillage services.

“I cultivated 20 hectares under command agriculture and what I harvested exceeded my expectations,” he told IRIN. “I have repaid the loan in full, set aside enough maize to last a year for my [six-member] family, and might not need another loan since I made a good profit.”

After repaying the loan, he was left with a net harvest of 40 tonnes of maize worth more than $15,000.

Command agriculture is being repeated with even more ambitious targets this year – and extended to include wheat, soya, and livestock.

Maize production will cover 220,000 hectares – 60,000 hectares irrigated and the rest rain-fed – at an anticipated cost of $213 million. A fuel supply company, Sakunda Holdings, among other private firms, is financing the programme on behalf of the government, although details are vague.

Command agriculture was “designed to solve a fundamental problem facing our country in the aftermath of the land reform, that of mobilising sustainable and affordable funding for our agriculture,” Finance Minister Patrick Chinamasa wrote earlier this year. “The 2016-17 harvest sets the stage for achieving this goal.”

A difficult road to food security

Zimbabwe has tried a number of schemes to kick-start agriculture since the disruption of land reform in 2000, in which white-owned commercial farms were seized without compensation and redistributed to landless Zimbabweans.

The economy was hit by a lack of foreign investment as a result, with successive droughts also undermining production. In response, in 2005/6 the army ran Operation Taguta/Sisuthi, which forced farmers to surrender their maize surplus, but this was deemed a failure. 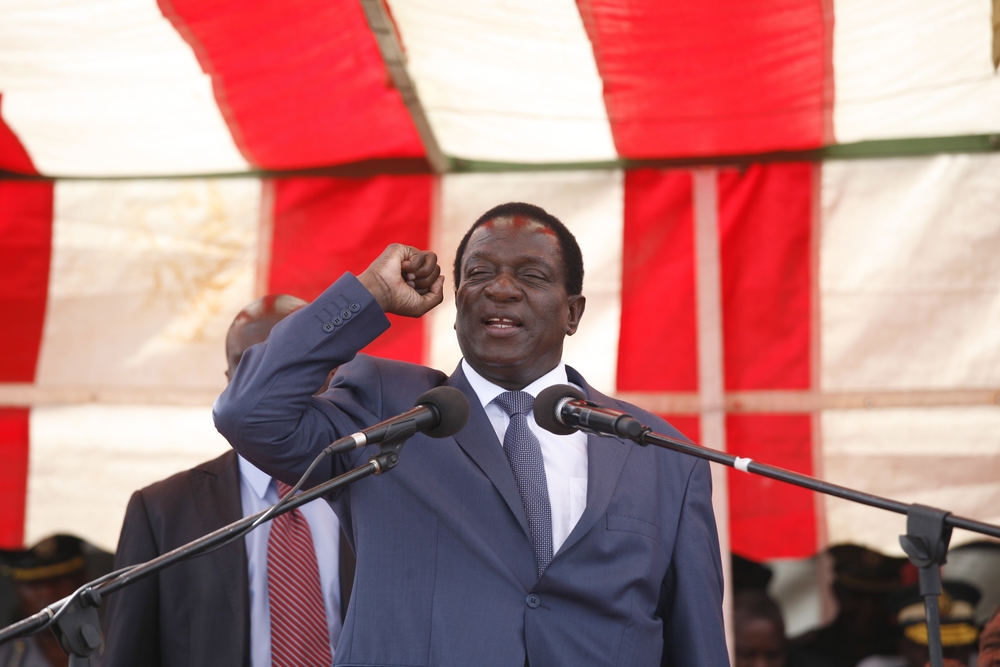 In 2007, the Reserve Bank introduced a Farm Mechanisation Scheme, but the equipment seemed to go mainly to the well-connected, was widely viewed as corrupt, and again failed.

Underlining the determination, he appointed Perence Shiri minister of agriculture. A former air force commander, Shiri, like Mnangagwa, won notoriety for his role in a government crackdown on dissidents in the 1980s that killed more than 20,000 civilians in Matabeleland.

At the core of Mnangagwa’s command approach is the centralised planning and development model borrowed from the Chinese – an old ideological partner of the ruling ZANU-PF party. The army and their logistical support plays a key role in the scheme alongside regular ministry of agriculture extension officers.

The cost of success

But the government is ignoring the economics behind the programme, critics say. It announced last year it would pay farmers $390 a tonne for maize this harvest – well above the world price, and reportedly roughly a third more than millers had offered the government.

According to Reuters, that price difference is worth $118 million, adding to a deficit for this year forecast at $400 million and an already heavy debt burden.

Institute of Development Studies research fellow Ian Scoones argues that agricultural subsidies are nothing new – domestically it was what was used to develop white commercial farming by the colonial government in the 1930s and 1940s.

He suggested that the current government could be looking to provide a shot in the arm to the struggling class of black commercial farmers who, although well-connected to ZANU-PF, have not performed as successfully as small-scale farmers as a result of land reform.

“The big question is of course, ‘how sustainable is this approach for the longer term – economically and politically?’” Scoones noted. “A bad rainfall year, or even a middling one, may unravel things quickly, loading more onto an already crippling national debt.”

“This is particularly important to note because most of the irrigation infrastructure across the country is in very bad shape,” he told IRIN.

Out of the 50,000 farmers who benefited under the maize scheme, more than 10,000 have reportedly not delivered to the GMB as required – largely because of the marketing board’s reputation for long delays in payment.

The difficult calculation made by farmers at harvest time is whether to sell to the GMB or to informal dealers who can pay on the spot but offer much less – an option that also avoids the additional cost of transporting your maize to the GMB’s silos.

According to one news report, as of 31 July the GMB had received just 230,000 tonnes of grain – out of the 2.1 million tonnes forecast to have been harvested. That poor result led to the deployment of the army to persuade farmers to release their harvest.

Without clear figures it is difficult to gauge the success of command agriculture. A report last month by the parliamentary lands and agriculture committee that had toured the country generally hailed the programme, but also pointed to significant gaps in implementation.

It found some of the free inputs were inevitably sold on the black market – the bane of other government subsidy programmes. Many farmers did not receive the full package on time and, in some cases, had to travel long distances to reach a GMB centre, where they were frustrated by the bureaucracy.

The committee also acknowledged that some farmers opted out of the scheme “because of fear of the word ‘command’. The perception was that this is a military programme and if one does not live up to the expectations, the consequences will be meted out in military style.”

On the back of the good harvest, Zimbabwe is expecting economic growth of 2.5 to 3 percent in 2017, according to the International Monetary Fund. The IMF also points out that the success of the contract farming system is about sustainability.

The government is aware of the budgetary implications but views targeted support as “warranted” to achieve food self-sufficiency, the IMF said in a statement.

It notes that the government is taking a bet that private sector participation in command agriculture will grow, allowing its role in turn to diminish. For critics, this is wishful thinking.