In the words of UN Syria envoy Staffan de Mistura, it is the “epicentre of suffering”. Just a few kilometres from the affluent central neighbourhoods of Damascus lies the Eastern Ghouta region, where hunger and deprivation reigns among bombed-out homes, as yet another icy winter descends on Syria.

The Eastern Ghouta wasn’t struck by some inexplicable natural disaster, but by war and collective punishment. The insurgent-controlled enclave is under siege by forces loyal to Syrian President Bashar al-Assad, who has imposed harsh restrictions on the entry of food, medicine, and humanitarian supplies.

The UN recently estimated that 393,000 people live in the Ghouta enclave, a quarter of them internally displaced. That represents 94 percent of all the people listed by the UN as living under siege in Syria. Their situation has always been difficult, but after smuggling routes were destroyed and aid deliveries stopped by Syrian authorities earlier this year, it has grown into a major crisis.

A last-minute rush of food deliveries in late October and November seems to have brought temporary relief, but the Ghouta’s humanitarian crisis is sure to continue. This is because it is man-made, and the men who made it do not want it to end.

A major staging ground for Syria’s anti-government insurgents in 2011 and 2012, the Eastern Ghouta region fell under siege by al-Assad loyalists in April 2013. Government troops have imposed restrictions on the entry of humanitarian supplies and food, while striking the area with artillery and from the air. Thousands have been killed and maimed, and the general health situation has deteriorated severely.

Inside the besieged area, two insurgent groups eventually came to dominate: the Islam Army and Failaq al-Rahman. Both rule their own areas with harsh tactics, while lobbing mortars into Damascus, also killing civilians.

For the past three or four years, the Eastern Ghouta had two points of contact with the outside world. The first was the Wafideen crossing near Douma, a checkpoint gauntlet run by state forces on one side and by the Islam Army on the other. The other was a network of tunnels through the Damascus suburbs, which served to move goods not permitted at Wafideen, including people, fuel, and medicines – and, for that matter, also cigarettes, narcotics, and ammunition.

Both the crossing and the tunnels have been systematically exploited for personal enrichment by corrupt regime and rebel commanders and their business associates. But whoever profits, the bill always ended up with the Ghouta’s besieged civilians, who have no choice but to pay the price asked – literally, a captive market. 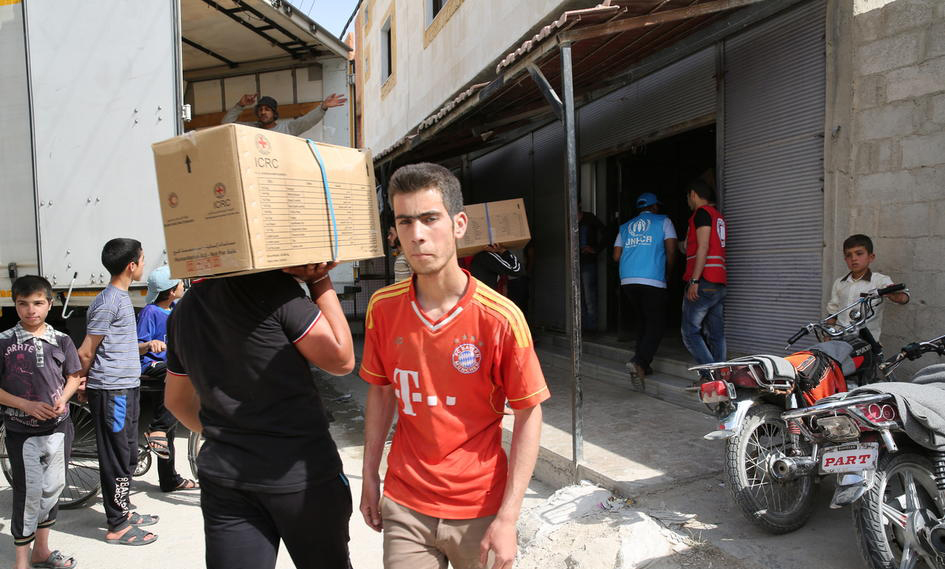 In addition to government-approved commerce and rebel smuggling, many in the Ghouta survive thanks to foreign aid. But to reach the besieged area, aid organs must ask the government’s permission. In theory, UN aid workers should not face any obstacles when trying to help civilians, but, in practice, al-Assad’s forces control the environment and wave guns in their faces, leaving the UN no choice but to beg for access. Most of these pleas go unanswered by Damascus, where officials have a political and economic stake in keeping the Ghouta’s humanitarian crisis boiling.

One reason is that profiteering and social problems undermine cohesion on the opposing side. In April-May 2016 and again in April 2017, the Islam Army and Failaq al-Rahman began to attack each other, partly over smuggling profits. Exploiting the breakdown in rebel lines, al-Assad’s government retook large parts of the enclave and was able to shut down the tunnels in late February 2017. As fuel stockpiles dried up, generators and pumps stopped functioning, leading to an accumulation of economic shortfalls and setting the stage for a dangerous winter.

From December 2016 to May 2017, Russia, Turkey, and Iran agreed to a new peacemaking framework for Syria, according to which de-escalation zones would be established to prohibit fighting and ensure the free flow of humanitarian aid. The Eastern Ghouta was singled out as such a zone, with Moscow taking lead on implementation.

However, despite Russian-brokered deals with the Islam Army in June 2017 and with Failaq al-Rahman in August (they were officially finalised in September), the situation now appears worse than before the de-escalation plan.

For one thing, the fighting continues. The front line between the Islam Army and loyalist forces has calmed down, but the conflict between Failaq al-Rahman and the Syrian government has intensified.

The humanitarian situation has deteriorated severely. Authorities in Damascus continue to shrug off most UN requests for access past army lines, and some aid workers say they now have less access to besieged civilians than before the de-escalation deals. For example, UNICEF was allowed to enter Eastern Ghouta 10 times in 2016, but only six times in the first 10 months of 2017.

Despite the fast-growing needs, Linda Tom, a Damascus-based spokeswoman for the UN emergency aid coordination body, OCHA, tells IRIN that humanitarian actors in Syria are working “well below capacity” due to the government’s refusal to approve deliveries.

In September, just as the Eastern Ghouta’s de-escalation zone was finalised, the situation abruptly worsened. After ordering a halt to the already heavily restricted commercial traffic through the Wafideen crossing, the Syrian government refused to permit any more UN aid missions.

It was a transparent attempt to stoke the humanitarian emergency in the Eastern Ghouta, but this time the effect was more severe than during previous rounds of food cuts. With the rebel trading tunnels out of commission for half a year, smuggling could no longer compensate for the shortfall or bring in medicine or basic necessities like fuel, which has not entered the Ghouta since February.

Food stockpiles dwindled quickly and triggered a scramble for whatever remained available on the market, the panicky mood inflamed by suspicions that rebel-connected businessmen were hoarding goods for speculation purposes. From August to October, the already high prices inside the Eastern Ghouta increased five-fold, far beyond any other region of Syria.

In October, a bag of flat bread – a daily staple in Syria, especially for poor people – cost 63 Syrian pounds at a public bakery in Damascus or around 98 pounds at a private bakery, according to figures from REACH, a UN-backed initiative working on humanitarian reporting. On the other side of the army’s food blockade, the same bag of bread in the Eastern Ghouta cost 1,428 Syrian pounds. In the Ghouta’s Kafr Batna area, bread bags reportedly sold for 2,000 pounds. 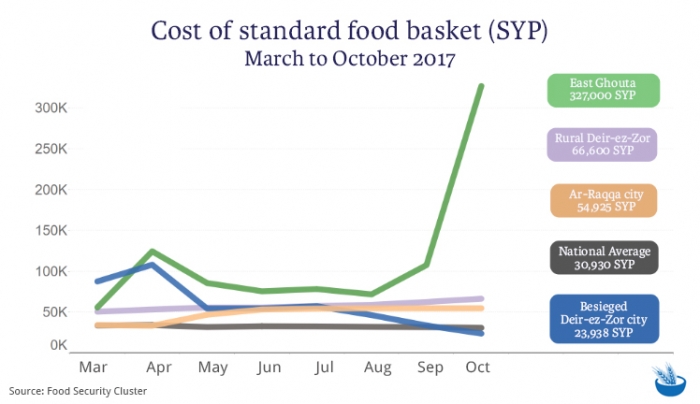 Prices were also affected by the winter season, when there is rising demand for salt to preserve food and for fuel to cook and to heat homes.

In October, a bag of salt cost nearly 54 times more in the Eastern Ghouta than in Damascus, according to REACH reporting. A month later, it had become 140 times more expensive, REACH’s Syria assessment manager Nanki Chawla tells IRIN. At that point, fuel was almost impossible to come by. Civilians were reported to be burning books or plastic instead, and even that was too expensive for poor families.

Most inhabitants of the Eastern Ghouta could now only afford one meal per day. Once adults found themselves unable to cut back any more on their own food rations, child malnutrition figures began to rise.

According to UNICEF, the proportion of children under the age of five that suffer from acute malnutrition in the Eastern Ghouta has shot up from 2.1 percent in January 2017 to 11.9 percent in early November – the worst rate of child malnutrition recorded anywhere in Syria since the start of the war. Reflecting years of chronic food shortages, the November survey also noted stunted growth in 36 percent of the Ghouta’s children.

These numbers, in an area a 10-minute drive from the glitzy hotels of central Damascus, are higher than in many crisis-ridden sub-Saharan African countries.

Too little aid to roll back the crisis

On 30 October, al-Assad’s government finally permitted the UN to send a 49-car aid convoy into the Failaq al-Rahman-controlled half of the Eastern Ghouta. Tonnes of rice, bulgur wheat, lentils, vegetable oil, sugar, and other consumables were distributed, including nutritional supplements for children. But it was far from sufficient for the entire population.

Even as it continues to block most humanitarian aid, the Syrian government has selectively approved commercial shipments from which regime figures are thought to profit. In late November, the government-connected Ghouta businessman Mohiyeddine Manfoush was allowed to send around 20 trucks through the Wafideen crossing, the first such shipment since September.

News that Manfoush was back in business prompted a quick drop in prices, with one pro-opposition news site claiming that salt instantly fell from an incredible 20,000 Syrian pounds per kilogram to 2,500 pounds – still very high. There is speculation about how much it may have cost Manfoush to reopen the army checkpoints of Wafideen, but all sides seem to take for granted that the only way to turn the siege trade on or off is by paying kickbacks to al-Assad’s entourage, and that one of the reasons for banning both aid and commerce at the same time was to drive up prices.

For the UN and other aid operators, the blockade remains in place despite the recent one-off permissions.

“We had hoped to do six convoys last week – everything ready, the trucks, the supplies, the courageous relief workers,” UN senior advisor Jan Egeland told reporters on 7 December. “All six stalled, three of them to Eastern Ghouta that has severe and acute malnutrition reported,” Egeland added. “And why we are not rolling? Because of lack of facilitation letters from the government.”

The clearest illustration of the man-made nature of suffering in the Ghouta is the UN’s attempts to evacuate severely ill and wounded civilians.

Six months ago, a Russian- and American-chaired UN task force created to improve Syria’s humanitarian situation gave the Syrian Foreign Ministry a list of 500 names of patients in urgent need of evacuation from the Eastern Ghouta. Most on the list are children, women, or elderly people who cannot receive adequate care in the besieged zone. They will die or suffer debilitating health problems if the UN isn’t allowed to help them out of the area.

Green-lighting the UN’s medical evacuation would be a cost-free, image-boosting concession for the Syrian government, but Damascus continues to ignore the request just like it ignores UN pleas for permission to send food to Syrian civilians.

Earlier this month, even the mild-mannered de Mistura seemed to feel that enough was enough. Noting that 12 people on the UN list had already died, he called the government’s approach to Syrian civilian lives “medieval”.

The government ignored his remarks.

Since then, IRIN has learned from the UN that an additional three patients on the evacuation list have died, including a 29-year old woman suffering from cancer and a nine-year-old girl.