This article is part of our in-depth coverage. Read more like this...
Part of a special project exploring violent extremism in Nigeria and the Sahel
MAROUA

Moustapha Bachir was watching a World Cup qualifying match in a bar when Boko Haram rolled into Amchide, in Cameroon’s Far North region. By the time they left, the jihadists had killed 30 people and torched homes and businesses.

Bachir, 22, didn’t recognise any of the gunmen - he was too busy escaping - and neither did he expect to. Boko Haram was a largely Nigerian insurgent group, committed to a hardline Islamist solution to Nigeria’s perceived ills.

Boko Haram had arrived in Amchide in a convoy of pick-ups, and fled back across the common border the same day when Cameroon’s Rapid Intervention Battalion showed up.

That was three years ago, at a time when Boko Haram was morphing into a regional problem, threatening Chad and Niger as well.

It found a foothold in Cameroon’s Far North. As Boko Haram escalated its attacks, Bachir began to hear of friends and classmates killed by the security forces while fighting with the militants.

So why would young Cameroonians choose to join a jihadist outfit shaped by Nigeria’s circumstances? Why did an insurgency known for its extreme violence still find willing recruits?

The Far North is the poorest of Cameroon’s 10 regions. School attendance is chronically low and formal employment – especially for the youth – scarce.

These conditions mirror those of northeast Nigeria where Boko Haram emerged. And the Islamists employed a tried and tested recruitment strategy of financial inducement that had proved effective at home.

“Before Boko Haram started violent attacks in Cameroon, they came to our communities and promised wealth and status to youths who would follow them to Nigeria,” said Bachir. “Most of us who were secondary school students rejected the offer.”

But, he added, others out of school “selling illegal watered-down fuel from Nigeria, textiles from Maroua [the administrative capital], farming and cattle rearing, took the offer. They were offered motorcycles and placements in Islamic schools in Nigeria.”

It is the same youthful petty trader class, scraping a precarious living, that has also filled Boko Haram’s ranks in Nigeria.

But the impetus for signing up may not solely be economic. In Nigeria, the original cultish Boko Haram movement was seen by its followers as a pious and disciplined antidote to the corruption of the Nigerian state. And their hardline message resonated across the region, where governments were also seen as in the pockets of Western interests.

The border is highly permeable, with the same Kanuri ethnic group – that form the bulk of Boko Haram – straddling both sides. Communities know each other, easing the penetration and acceptance of the militant’s message.

Boko Haram’s first attack in Cameroon was in March 2014. Since then it has carried out at least 510, according to an International Crisis Group report in November 2016. It initially massed fighters for raids, but now increasingly relies on improvised explosive devices and suicide bombers.

“Young girls have carried out most suicide attacks. Between July 2015 and October 2016, they left at least 290 dead and more than 800 wounded,” the ICG report said.

Government media reports say the violence has killed a total of 2,000 people, displaced 200,000, and cost the country $18 million in lost revenue from interrupted trade along the northern border.

President Paul Biya, in distant Yaounde, has ruled Cameroon for 35 years. His time in office has been marked by allegations of corruption and human rights abuse.

Poor governance and neglect of the largely Muslim Far North adds to the lack of representation felt by some ethnic groups, including the Kanuri. 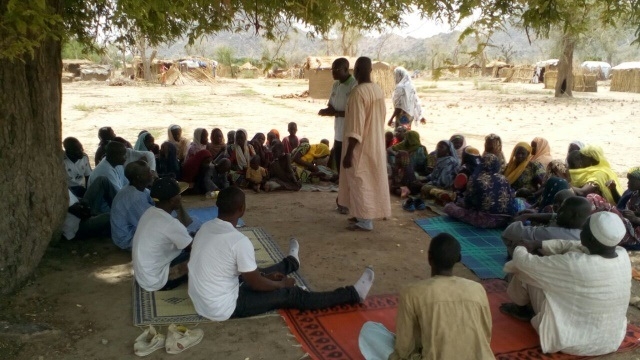 “These are groups of people who feel left out of local and national governance,” said an academic at the University of Maroua, who refused to be named. In that context, Boko Haram seemed for some a direct response to their marginalisation.

Adder Abel Gwoda, a lecturer at the same university and co-founder of the NGO African Positive Peace Initiative says the government missed the warning signs.

He had presented a study to the authorities showing that 600 young men had left the northern city of Mora for Nigeria in 2012, recruited by Boko Haram. It was ignored until the kidnapping of a French family in 2014 by Ansaru, an offshoot of Boko Haram.

“It was after the kidnap that an army general called me and suggested we begin a deradicalisation process,” Gwoda told IRIN.

His approach was to focus on social assistance channeled through his youth movement, Youth Dynamics for the Development and Emergence of Cameroon.

It donates food and farm inputs to displaced and vulnerable communities along the border, as well as organising health screenings with government health workers.

“We chose the humanitarian approach to deradicalisation because I thought if our dissuasive messages were hard, the villagers would not listen,” Gwoda explained. “Instead of talking about Boko Haram, we taught them that the future is in schooling.”

Scores of youth groups have mobilised in the Far North with similar development and social justice agendas. One of them is Local Youth Corner Cameroon.

“We are sending out messages that violence is not the solution to these problems… We are also [urging] the government to play its role by eradicating the drivers of radicalisation.”

Christian says the surge in youth-led civil society groups proves that young people are not the problem. There are so many his organisation is building an index to track some of the most active.

Toumba Haman, 21, survived the Amchide attack. He had friends and neighbours who voluntarily joined Boko Haram: “They were easily convinced because they were uneducated and poor.”

Now Haman is trying to do something about it. With a group of university friends they have formed an association urging young people to stay in school rather than quitting to find odd jobs.

They argue that education can be a meal ticket, and help avoid the blandishments of Boko Haram.

Only 10 youths in his village finished secondary school, said Haman. “We want to go back and encourage our peers to go to school. I feel like I owe my community.”