Seemingly out of nowhere, Bangladeshi nationals have become the second-largest group arriving in Italy behind Nigerians, on a route more commonly used by migrants from sub-Saharan Africa. This IRIN investigation from Bangladesh and Italy gets behind the rising numbers and looks at the motivations and pressures underlying this unexpected new trend.

Several abandoned lots west of the Catania bus station in Sicily, Naheen stands on a street corner selling packets of tissues while his brother cleans car windscreens for spare change.

Taking a break, Naheen holds out his palm. It bears a long scar, a reminder of being robbed at knifepoint as he was leaving Libya just over a week ago.

The 24-year-old Bangladeshi paid 1,000 euros for a spot on a wooden boat, but there were other costs too. Before departing, his smugglers stripped him and his 300 fellow passengers of all their remaining valuables.

“There were many Somalis and people from other African countries,” he recalled. “It was so dangerous. I can’t swim, but I did it because I couldn’t stay in Libya.”

Naheen had worked as a medical assistant in a Tripoli hospital for three years. Like most of the 20,000 Bangladeshi workers still in Libya, he got the job through a recruitment agency back home. The agency arranged his visa and travel for a fee of 3,000 euros. The overseas employment of Bangladeshi contract labourers has become synonymous with exploitation and low wages, but the poor working conditions and deteriorating security situation in Libya proved more difficult than Naheen was willing to bear.

Now in Catania, Naheen works the streets to earn money with his brother, who arrived seven months earlier. The two represent the latest shift in Europe-bound migration: a steep increase in the number of Bangladeshis arriving by boat from Libya.

Fleeing Libya or dreaming of Europe?

From the beginning of the year until 22 May, 5,650 Bangladeshis arrived in Italy, accounting for 11 percent of all arrivals of undocumented migrants to the country, according to the Italian Ministry of the Interior. During roughly the same period last year, just 10 Bangladeshi nationals had arrived by boat, although by the end of 2016, 7,578 had disembarked in Italy, according to Ahmad Al Rousan, who tracks migration numbers for Médecins Sans Frontières (MSF) Italy.

According to Al Rousan and other experts IRIN interviewed, the new arrivals from Bangladesh can be divided into two main groups.

The first are those, like Naheen, who after working in Libya for several years, have begun to flee the country as security conditions have worsened in the past year.

Experts estimate that between 50,000 and 80,000 Bangladeshis were working in Libya at the beginning of the civil war that ousted former dictator Muammar Gaddafi in 2011, and that only a fraction were able to flee the country in the immediate aftermath, as they struggled to secure resources or state assistance for transportation.

The second and faster-growing group of new arrivals are Bangladeshis who travel to Tripoli via Istanbul or Dubai with the explicit goal of reaching Europe.

Al Rousan said agencies in Bangladesh are charging migrants between $7,000 and $10,000 to facilitate the journey to Europe, the majority of which they keep for themselves. While there are no direct commercial flights from Bangladesh to Libya, non-stop flights from Istanbul to Tripoli start at about 200 euros. From Dubai, the price is roughly 500 euros.

Once in Libya, migrants must still pay smugglers for the perilous journey across the Mediterranean, where 1,569 people have lost their lives so far this year.

Mehedi, a teenager who arrived in Sicily a few months ago, flew from Dhaka to Tripoli via Istanbul on a fake work visa issued by a Bangladeshi agency.

When he arrived in Libya, he was met at the airport by an intermediary and taken to a safe house. From there he called his parents who, having confirmed his arrival, paid the agency 6,000 euros. But shortly afterwards, he was picked up by police in Tripoli and jailed for six months. Asked about conditions in detention, Mehedi only frowned.

Numerous organisations, including MSF, have highlighted the appalling conditions and levels of abuse inside Libya’s migrant detention centres.

Eventually, Mehedi was released and his family wired him over 800 euros to pay a smuggler for an Italy-bound boat. After being rescued at sea and brought to Sicily, he was sent to a state-run reception centre where he applied for asylum.

Applications are decided on a case-by-case basis that could take years, given the volume of claims Italy is dealing with. In the meantime, those migrants who make efforts to learn Italian and integrate themselves into the local economy, are more likely to be allowed to stay.

For now, Mehedi is staying at a privately-run shelter for young, unaccompanied migrants near Catania’s bus station. He shares his dorm room with five other Bangladeshis. Like most of his peers in Catania, he spends his days looking for work or cleaning car windscreens for an income of between five and 15 euros per day.

“This is the only work we can find. It’s better than nothing,” said 19-year-old Jahid, squeegee in hand. Jahid also flew to Tripoli from Bangladesh via Istanbul for 7,000 euros, arriving in Sicily four months ago. 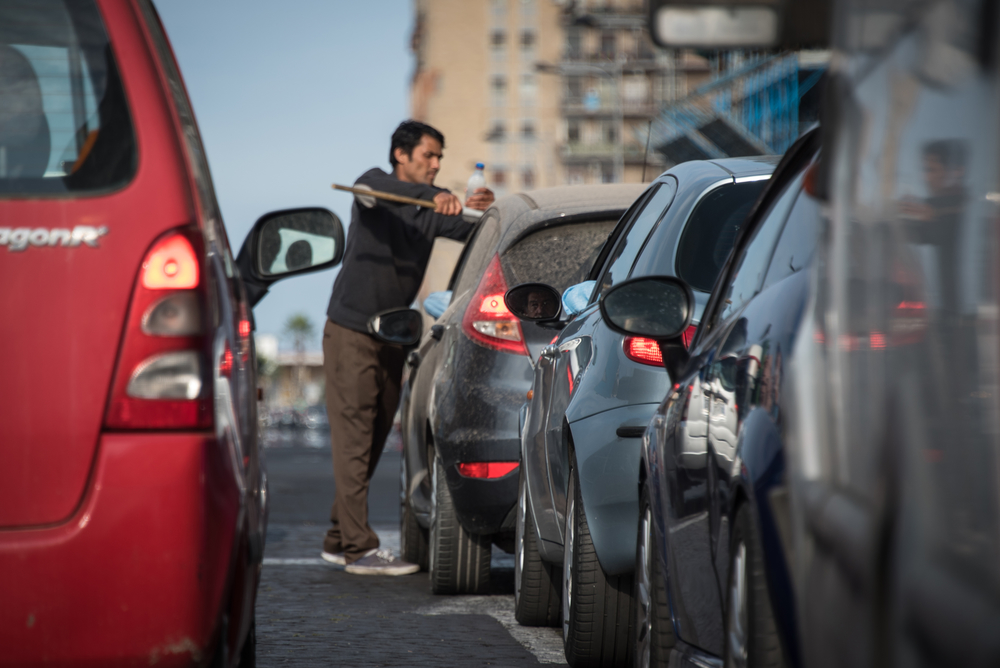 A low-income nation with high levels of unemployment, Bangladesh has a long history of labour migration to the Gulf states, Malaysia, and Singapore.  In 2015, 7.2 million of Bangladesh’s 165 million citizens were living abroad, according to the UN. Migrant workers play an important role in the Bangladesh economy, sending home more than $15 billion in remittances last year alone.

“Bangladeshis have been working abroad since the 1970s,” explained Benjamin Etzold, a senior researcher at the Bonn International Centre for Conversion and an expert on Bangladeshi migration.

“It’s a normal part of life, and families in Bangladesh depend on [remittances]…. If you are young man who wants a wife and wants to raise a family… it’s almost expected that you, at some point in your career, go to another country to earn the money to do that.”

Bangladesh’s state-run Bureau of Manpower, Employment and Training (BMET) licenses and regulates recruitment agencies that link prospective employees with overseas employers. In the past, such agencies have been accused of charging exorbitant fees and using tactics that often trap workers in exploitative situations.

Mohammad Azharul Huq, additional secretary at the Ministry of Expatriates’ Welfare and Overseas Employment in which BMET is located, told IRIN the government has taken numerous steps to prevent illegal migration to Libya.

“The government is not sending people to Libya at the moment. People who are going, are going illegally,” he said. “Law enforcement agencies are working to stop human trafficking. Our ministry is also conducting some awareness programmes to make people aware about the danger of going to Libya illegally.”

But several migrants recently returned to Dhaka told IRIN that agencies were misinforming prospective clients about conditions in Libya and the ease of reaching Italy from there.

“Many of them do not know the condition of Libya and trust the false promises of the agency,” said Arpon Mahmud, who returned home earlier this year after nine years working in Libya. He added that the agencies avoid sending people via large airports with tight security. “Sometimes the route is Bangladesh’s Chittagong airport to India to Dubai, Turkey, and then Libya,” he said.

Another trigger for the relatively sudden appearance of Bangladeshis on boats to Italy may be the end of an important legal route. In 2007, 11,000 Bangladeshi contract workers came to Italy through legal avenues, and similar numbers arrived each year until 2013, according to BMET data on overseas employment. But following a change in Italian policy, a sharp drop occurred in 2014, bringing legal arrivals down to just three by 2016.

In recent years, Italy has attempted to limit migration flows by reducing the number of visas it issues to citizens of many countries, said Federico Fossi, a spokesman for UNHCR, which is advising the National Commission for Asylum Rights.

“Bangladesh is no longer included among the countries for which there is a specific reservation of [visas],” Fossi wrote in an email to IRIN.

“Migration usually takes place because of networks,” he told IRIN. “[There are] probably Italians of Bangladeshi origin who help facilitate these journeys.”

The Bangladeshi community in Italy has grown since the 1990 passage of the Martelli Law, which offered a path to citizenship for irregular migrants in the country. An estimated 100,000 Bangladeshi nationals now live in Italy and a multitude of Bangladeshi-run grocery stores and businesses can be found in Catania as well as in the capital, Rome. Between 2000 and 2010, Bangladeshis in Italy remitted nearly $1 billion, according to Bangladesh’s central bank.

Although Britain still hosts a larger Bangladeshi community, Etzold said more migrants might now be arriving in Italy because the country still offers them “a chance to make it”.

“It’s getting more and more difficult to get asylum in Germany,” he said. “It’s almost impossible to enter Britain… so where else to go?”

“Another place to work”

Standing among a crowd of tourists in front of the Colosseum in Rome, Khan, a 44-year-old from Bangladesh, watched as police on motor scooters chased Bangladeshi vendors out of the plaza. Khan himself worked as a street hawker when he came to Italy 18 years ago, but after working more jobs than he can count, he now owns a grocery store.

He said vendors selling iced water bottles and selfie sticks at the city’s many landmarks make between 20 and 40 euros a day. It may not seem like much, but he said many of the migrants share apartments with up to 10 roommates so they can still afford to send money back home to their families.

While IRIN was speaking to him, an officer approached Khan and asked him what he was doing.

“Nothing, just standing here,” Khan replied, before being asked for his residence documents, which he provided.

The officer told him to leave the area. Walking away, Khan explained that he has been a foreign labourer his entire adult life, having worked in Dubai, Qatar, and Russia, before arriving in Italy.

On the outer edge of the Colosseum plaza, Khan passed a pair of officers who had stopped a young Bangladeshi with a plastic bag full of water bottles. The teenager claimed the bottles were all his, so the officers told him to drink them on the spot. He opened a bottle and began to chug it down until one of the officers knocked it into his face, causing him to choke and spit.

Khan looked away from the scene without saying a word. Asked what he thought of life in Italy, he responded: “It’s another place to work.”

*Names of migrants have been changed to protect their identities