UN Secretary-General Antonio Guterres is determined to make conflict prevention a priority during his tenure, but he’s likely to find it tough convincing member states to fund peace-building initiatives, even if it could save billions in humanitarian and peacekeeping spending down the road.

Guterres took office at the beginning of this year with a rallying call to both his staff and member states to make 2017 “a year for peace”.

“We spend far too much time and resources responding to crises rather than preventing them,” he told the Security Council just days after assuming his post. “We need a whole new approach.”

Few would disagree with his analysis at a time when conflict-induced crises are proliferating way beyond the capacity, or willingness, of the international community to deal with them. Even as governments have steadily increased their aid budgets, the gap between needs and available funding continues to grow. And that gap is likely to widen further in the wake of significant cuts to US foreign aid being pursued by President Donald Trump’s administration.

But given the funding crisis, Trump’s “America First” doctrine, and pervasive political and economic uncertainty in Europe, how does Guterres intend to turn his vision into reality?

So far, the former Portuguese prime minister has been heavy on rhetoric but light on detail, although he has commissioned an internal review of the UN’s entire peace and security architecture, which is due to report back in June with recommendations for how these various departments and agencies could be restructured.

As he awaits the findings, his “whole new approach” appears to boil down to providing leadership within the UN system in making early conflict prevention the priority, using his renowned diplomatic skills to work tirelessly for early mediation, and restructuring the UN’s peace and security architecture following the review.

Clearly, preventing conflicts before they develop could save billions of dollars and countless lives. It’s also central to the UN’s mandate. The maintenance of peace and security is described as the organisation’s primary purpose in Article 1 of the UN Charter.

And yet, three reviews of the UN’s peace operations completed in 2015 all concluded that the organisation was under-performing on conflict prevention and peacekeeping.

The High-Level Independent Panel on Peace Operations (HIPPO), appointed by former secretary-general Ban Ki-moon, acknowledged that preventing conflict was often beyond the UN’s control, but found that a lack of strategic decision-making at the top levels of the organisation was leading to a failure to engage early enough to address emerging crises. It also found that responses were often ad hoc and disconnected from national and regional efforts.

“One of the established principles of effective prevention is that there has to be a holistic strategy and you can’t deal with conflict from separate entry points,” commented Youssef Mahmoud, a senior adviser at the International Peace Institute who served as a member of the high-level panel.

Guterres has been frank about the UN’s failings in this area. In his remarks to the Security Council, he stated that “while the causes of crises are deeply interlinked, the UN’s response remains fragmented”.

Partly this is a lingering by-product of the way the UN was structured 70 years ago into three separate pillars: human rights, peace and security, and development. It means that work done by the UN’s development system still often fails to link up with that done by its political missions and peacekeeping operations.

“We still do have a UN system that’s struggling to come together,” acknowledged Stephen Jackson, head of policy planning at the Department of Political Affairs, which plays a key role in the UN’s preventive diplomacy and mediation efforts.

“We essentially have had peacekeeping operations, special political missions, and engagement by UN country teams on the ground. There are still obstacles we have to overcome to blending those three effectively,” he told IRIN, adding that the system also made it difficult to rapidly scale up or scale down responses.

“For instance, in a transitional context, say Cote d’Ivoire, we’ve just recently gone from quite a large peacekeeping operation straight to engagement by the UN country team, so there’s no longer any political or security presence.”

The 2030 Sustainable Development Goals (SDGs) are part of an effort to achieve a more integrated approach, and Guterres and others have cited them as providing an existing framework for conflict prevention. “Peace, security, development and good governance are all in one document,” said Mahmoud. “One of the better ways of engaging in prevention, particularly early prevention, before the outbreak of violence, is to faithfully and fully implement all the SDGs.”

In a memorandum to Secretariat staff circulated during his first week in office, Guterres stated his intention to pursue “cultural, process and structural” reforms to improve the UN’s performance on peace and security. The memo set in motion several immediate actions aimed at reducing “structural disincentives” and “bureaucratic barriers”, including an order that the Departments of Political Affairs and Peacekeeping Operations move into shared offices “to facilitate more effective and integrated decision-making”.

Several reviews have identified the DPA and DPKO’s overlapping mandates and competition between the two departments as contributing to the “fragmented” response that Guterres alluded to. But various other UN departments and agencies are also involved in conflict prevention, from the UN Development Programme to the UN Peacebuilding Fund and the Peacebuilding Commission.

IRIN spoke to one observer close to the reform process who expects the internal review to recommend the DPA and the DPKO being dismantled and reassembled as entirely new departments.

A number of other potential organigrams are in circulation. A recent report by the Centre on International Cooperation presents several of them, along with their various pros and cons, but notes that “without strong leadership and management that ensure departments work together, and member states’ support for new approaches, no organisational structure will deliver”.

“Internal restructuring matters, of course, but as important is to introduce a stronger culture of preventing and identifying where and how the UN can make a difference,” said Richard Atwood, director of the International Crisis Group’s New York office.

He gave the example of UNDP’s often cautious approach to engaging with governments when negative trends emerge and the fact that although the DPA plays a critical monitoring role, it has to work with other parts of the system to forge a response.

Early indications are that Guterres could provide the kind of leadership needed to make those cultural shifts. He has set up and is chairing an executive committee that meets weekly and brings together all three UN pillars to discuss and take decisions on inter-departmental issues.

He also seems determined to use his own “good offices” and political capital to engage in preventive diplomacy – an area not generally viewed as one of Ban’s strengths.

Guterres has already done some behind-the-scenes work on South Sudan and Somalia and met with a number of Gulf state leaders. But there are limits to what even a reform-minded secretary-general can achieve in the face of shifting geopolitics and extreme funding uncertainty. 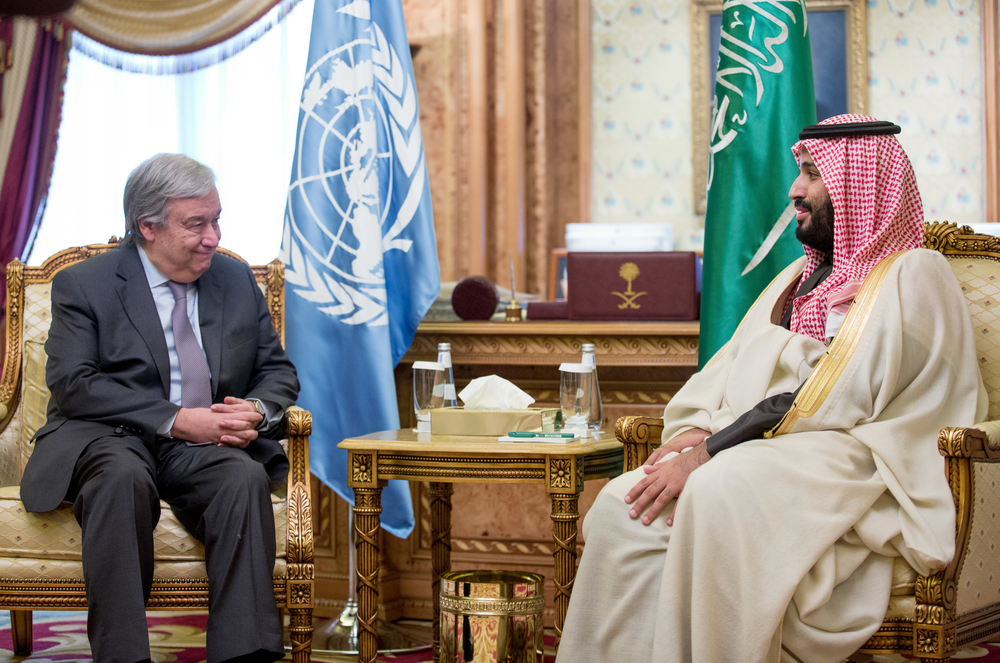 Where’s the money coming from?

The HIPPO report identified unpredictable funding as one of the major impediments to the UN’s work on conflict monitoring and mediation, much of which is done by the DPA and financed by voluntary contributions from the member states.

Jackson said there was “an overwhelming case” for addressing the lack of predictable funding for prevention. He explained that while peacekeeping missions are funded by obligatory, assessed contributions from member states, the vast majority of peacebuilding activity falls under the development system and is dependent on voluntary contributions.

“Supposing you have a post-conflict peacekeeping mission and the mission begins to downsize. More and more of the challenge is expected to be taken up by the UN country team,” he told IRIN.

Guterres is expected to make a case for regular budgetary resources to fund prevention work at a high-level meeting on peacebuilding and sustaining peace to be held during the General Assembly session later this year.

It’s a tough time to be asking for more money, just as the Trump administration is threatening to slash funding for peacekeeping missions and humanitarian aid, but Guterres could argue that spending on prevention represents a major cost savings down the road.

Because prevention activities are spread across multiple departments and agencies, no one IRIN contacted for this article would venture an estimate of how much the UN as a whole currently spends on conflict prevention, but they all said it was a fraction of the amount spent on responding to conflicts. For every dollar spent on prevention by the DPA, for example, one UN official estimated that $200 is spent on crisis management and humanitarian response.

For Marc-André Franche, who heads up the PBF, “if you want to spend less in a fiscal environment where it’s tough to find funding for peacebuilding and humanitarian aid, we need to invest more in prevention”.

But member states seem unconvinced. The PBF only managed to raise about half of the $300 million it requested to fund projects over the next three years at a pledging conference last September. The US offered up just $300,000, while most of the larger contributions came from Europe, Japan, and Canada.

Part of the challenge is convincing member states that prevention works. “It’s very tough to prove something that hasn’t happened,” Franche pointed out, adding that efforts are under way to develop monitoring processes to track the differences that PBF grants make. Those grants currently fund 120 projects in 25 countries and range from supporting security-sector reforms in Guinea to improving services for victims of gender-based violence in Mali and strengthening the criminal justice system in Guatemala.

A recent review of several PBF projects by Britain's international development department, DFID, gave the Fund an A+ rating, describing it as an “essential part of the UN’s approach to peace and security… providing quick, flexible finance when fragile states need it most”.

Most donors, however, are not set up to give the multi-year, unearmarked funds needed to intervene early and quickly, something Franche said had to change if the UN is to honour its mandate.

“Last year, the UN spent $8 billion on peacekeeping. The world spent $28 billion on humanitarian aid and at least $12 billion was spent in Europe as a result of the refugee crisis… this is absolutely unsustainable.”

(TOP PHOTO: Rebel fighters of the Sudan People’s Liberation Army-North during a training exercise at their barracks in 2016. Alex Pritz/Documist for IRIN)