The Syrian war seems to be moving toward a new phase in which President Bashar al-Assad’s rule is no longer seriously threatened, but violence continues unabated. In northwestern Syria, renewed fighting on the edges of Idlib Province and its surroundings, the country’s most important rebel-controlled area, gives a glimpse of the tragedies that may yet lie in store, as irreconcilable forces wrestle for control over a region where hundreds of thousands of desperate civilians have sought shelter.

On 21 March, Sunni rebels led by the jihadi group Tahrir al-Sham stormed Syrian army positions north of Hama, resuming a long-running opposition effort to burrow into the northern flank of Syria’s fourth-largest city. The rebels hope to seize Qamhaneh, a Sunni town in the Hama countryside known for its pro-Assad militias. This would greatly improve their prospects of taking the provincial capital. Taking Hama, some 85 kilometers south of Idlib, would be the insurgency’s greatest victory to date, handing them control over a million-strong city, opening a gateway to central Syria, and fracturing al-Assad’s strategic defences.

The rebels are unlikely to get that far. The Syrian government is already redistributing troops to Hama, and pro-government militias recruited in Qamhaneh are rushing home from battles against the so-called Islamic State east of Aleppo. Al-Assad’s Russian and Iranian allies are also likely to pitch in.

Nevertheless, the regime setbacks illustrate the limitations of al-Assad’s exhausted army in northern Syria, where it faces some 6,000 square kilometres of opposition-controlled territory in and around Idlib Province, including parts of the Hama, Latakia, and Aleppo provinces. Unlike other rebel-held areas, this wider Idlib region is impossible for the Syrian army to conquer through a war of siege and attrition, since the insurgency receives constant support from across the Turkish border.

Al-Assad recognised as much in an interview with the Russian daily Komsomolskaya Pravda in October of last year, saying: “You cannot cut [off Turkish supplies], because Idlib is adjacent to Turkey; it’s right on the Syrian-Turkish borders. So you cannot cut; you have to clean. You have to keep cleaning this area and to push the terrorists to Turkey to go back to where they come from, or to kill them. There’s no other option.”

That seems to be the gist of the Syrian government’s strategy: Clean, push, and kill to keep the insurgency at bay, taking what it can and leaving the rest for later, in the hopes that Turkey will one day decide to cut off support for the rebels.

Yet if the renewed rebel offensive in Hama is any clue, Ankara and its allies remain determined to push back, doggedly feeding arms into northern Syria in order to pin down al-Assad’s army, prevent him from winning the war, and increase their own leverage in talks with his Russian allies. Worst of all, as many as two million Syrian civilians may be trapped in the area where these relentless forces collide.

The past week of fighting in Hama is an instructive example of what is at stake in the battle over northwestern Syria. Both sides accuse the other of massacring innocent locals, and Save the Children reports that more than 10,000 people were forced to flee their homes in the first 24 hours of fighting – 40,000 are now believed to be displaced by the violence. As the front line rumbles back and forth across the countryside of northern Hama, it leaves a trail of ruined villages and uprooted civilians in its wake, many of whom live in fear of both sides.

Minority communities like the Christians of Mhardeh, northwest of Hama, may be most afraid of the sectarian Islamists that dominate the opposition. Syria’s rebels often vow not to harm minorities, but few in the non-Sunni communities seem to trust them, and previous opposition advances into Christian areas have resulted in kidnappings, looted property, and desecrated churches. The Salafi clerics who hold sway over rebels in Idlib and Hama take an even harsher line toward heterodox Islamic sects: The small Druze community in Jabal al-Summaq has been forced to renounce its faith at gunpoint and leading rebel clerics reserve particular venom for Alawis, whom they describe as an apostate sect that should be destroyed. 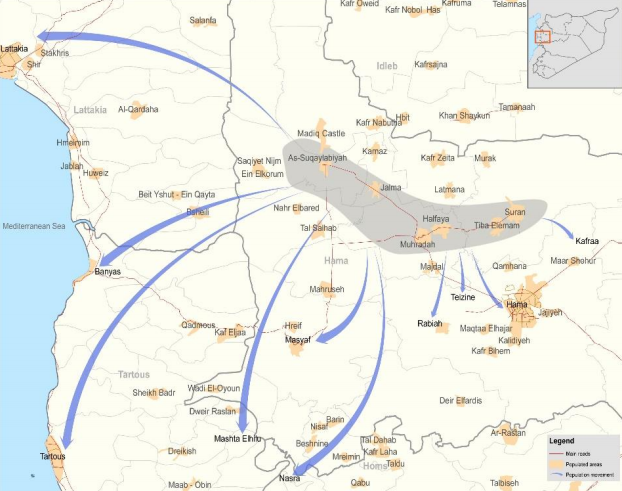 OCHA/ReliefWeb
Increased clashes in Hama Province have displaced up to 40,000 people

At the same time, many locals in this mostly Sunni region seem just as terrified of the Syrian army, which relies in part on violent and undisciplined Shia and Alawi militias, and which conducts its war using brutal tactics. Villages that slip out of state control are routinely targeted by Syrian and Russian jets, which have hit hospitals, schools, and civilian neighbourhoods in what seems like a deliberate strategy of collective punishment, sometimes using cluster munitions and incendiary bombs. The aerial bombardment is thought to be a leading cause of death and destruction in northwestern Syria, as well as a major reason for population displacement. Last year, an investigative panel commissioned by the UN Security Council also blamed the Syrian government for repeated attacks with chlorine gas in Hama and Idlib.

Government air raids and the arbitrary mortar and rocket fire from both sides mean there are no secure areas for civilians, neither close to the front nor deeper into opposition-held territory. In the rebel-held town of al-Latamneh, opposition sources recently reported the bombing of a hospital, and though rebel authorities have shut down schools to save pupils from bombing raids as far away as Idlib city, children are still killed when bombs drop on residential areas. The more the fighting intensifies and the deeper either party pushes into the territory of the other, the worse the carnage is likely to get.

According to a recent update from the UN’s emergency aid coordination body, OCHA, Idlib Province alone has 1.78 million inhabitants, or about 10 percent of Syria’s current population (not counting the more than 4.9 million refugees abroad). The adjacent rebel-held parts of Latakia, Hama, and, particularly, Aleppo may hold hundreds of thousands more.

More than half of the people estimated by the UN to live in Idlib have been displaced from other parts of the country, and the region has emerged as Syria’s main refuge for anti-Assad activists and people wanted by the security services. In fact, the government is deliberately encouraging this trend. As is clear from al-Assad’s comments to Komsomolskaya Pravda, the government has resigned itself to the fact that northwestern Syria will remain outside of its control for a long time to come, and it is now using Idlib as a dumping ground for irreconcilable enemies.

When a town elsewhere in Syria is brought to heel, the army typically offers local rebels and opposition activists the choice of either staying and surrendering, which many are understandably afraid of doing, or leaving with their families to Idlib. Many thousands have opted for the latter, and northwestern Syria now hosts some 36,000 people from eastern Aleppo, more than 2,000 fighters and civilians from Wadi Barada, and thousands of others. While the armed rebels among these internal exiles tend to join local factions in order to continue fighting, presumably adding another drop of intransigence to the northwestern opposition, civilians struggle to adapt to life in crisis-ridden Idlib. While many had hoped to continue on to Turkey, the border is closed and likely to stay that way. This is ultimately Ankara’s decision, but clearly has quiet encouragement from European leaders who want Turkey to stop refugees from reaching the EU.

With no way out and no way back, they’re trapped—but it’s not clear they can stay, either. Nearly three in four inhabitants of Idlib Province, or 1.3 million people, already depend on humanitarian assistance from the UN or foreign charities. But the area is under the sway of rebel groups that most of the international community considers terrorists and extremists, particularly since the creation of Tahrir al-Sham earlier this year. The group is already clashing with foreign aid organs over control over food distribution, and if aid deliveries end up being reduced or blocked as a consequence, people in the wider Idlib region will be left without any way of fending for themselves and their families.

Running out of options

For the moment, the Syrian government is on the defensive in the northwest, but that will likely change—and regardless of who moves forward, the way the war is fought means that innocent civilians will be targeted.

After six years of non-stop bloodshed, and with hardliners firmly in charge on both sides, there is little chance of a compromise or meaningful de-escalation in the wider Idlib region.

Many opposition members are likely to keep fighting even in the absence of any hope for victory and with little regard for the costs for local communities to which they do not belong. The Syrian regime pursues the root-and-branch destruction of resistance to al-Assad with the same single-minded frenzy, rarely even feigning concern for civilians on the enemy side.

As these rivals tear up communities on the ground, killer drones and attack jets from at least three air forces – Russia, Syria, and the United States – now roam the skies of northwestern Syria, hunting their respective enemies and firing tonnes of high explosives into civilian towns every day. New tragedies are reported with mind-numbing regularity, and there is no end in sight.

The war in the northwestern corner of Syria originally emerged in 2011-2012 as a front in the conflict over al-Assad’s presidency, but violence rumbles on undiminished even after that question has begun to fade from the political agenda. Now infested with regional proxy rivalries and counterterrorism kill missions unfettered from any semblance of long-term policy, Idlib and its neighbouring territories have transformed into a free-fire zone attacked by nearly every actor in the war.

Simultaneously, it serves as a holding pen for hundreds of thousands of unarmed civilians, including many activists and former prisoners who seem prepared to do almost anything to avoid being caught again. Even if they were to give up the war, they have no way out, and no one is working to create one. They are trapped between a group of extreme jihadis, a dictatorship ready to use any amount of violence to claw back control, and an international community that seems content to let northwestern Syria burn to cinders.