BEIJING
The world’s strongest storm of the year slammed into China last week, just as the country was recovering from severe flooding that the government said left about 1,000 people dead. In many nations, this would prompt a deluge of donations to disaster response, but not in China, which is ranked the second-least charitable country in the world.
A new law is meant to fix this, but critics have voiced concern that it is too restrictive and will lead to greater state control.
Researchers and charity workers say people are reluctant to donate largely because they don't trust the system. Scandals have damaged the reputation of major charities, many of which have been forced to operate in legally grey areas for decades if they do not have a government sponsor.
The national charity law, which came into effect on 1 September, includes improved fraud protection, relaxed registration requirements, and incentives such as tax benefits. The new measures may help encourage charitable giving, which is especially important in a country like China that suffers from frequent natural disasters but doesn't generally invite foreign aid.
“It is too early to say if the law will lead to an increase in giving, but I think it will definitely push the charity sector to become more careful and accountable, and in time this should encourage more giving,” said a staff member of a government-backed humanitarian agency who requested anonymity because she was not authorised to speak to media (A media officer from the same organisation did not respond to requests for comment).

China ranked second to last of 145 nations surveyed for charitable giving, according to the World Giving Index published last year by the Charities Aid Foundation. It was followed only by Burundi, a country in the throes of a violent political crisis.
Surveyors found that only eight percent of Chinese reported giving money to charity during the last month, while just four percent said they would volunteer. 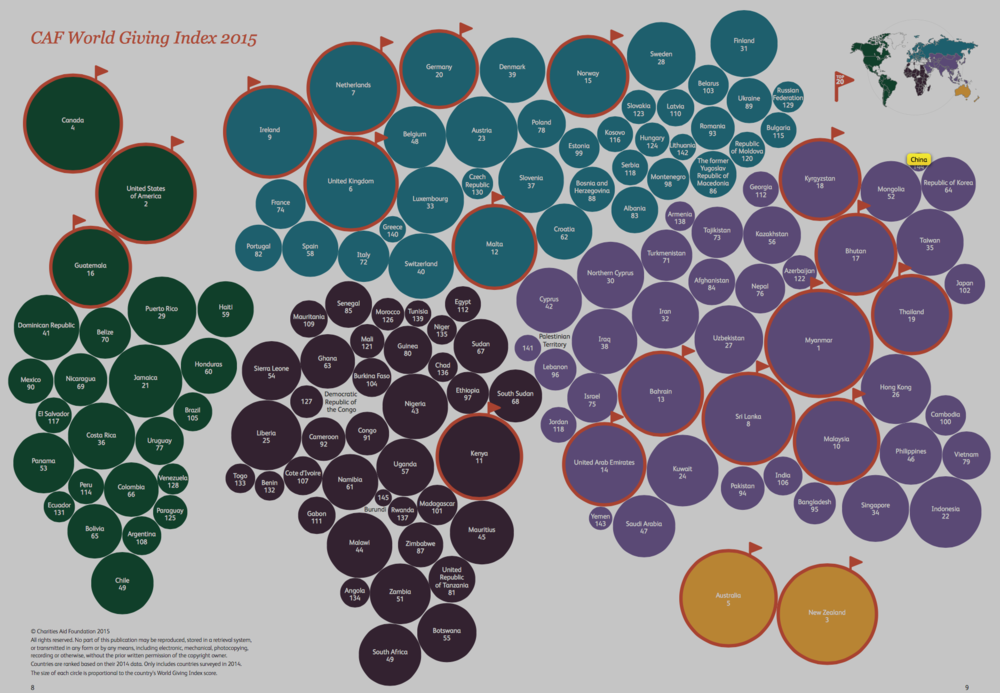 Charities Aid Foundation
China is the second-least charitable country in the world, according to the World Giving Index
The low level of charity in China is particularly striking since the country is producing more billionaires than ever. The murky nature of the Chinese economy makes it hard to measure wealth, but Forbes estimated the country had 335 billionaires last year (compared to the United States with 536), while the Shanghai-based publishing and market research firm Hurun Report put the number of Chinese billionaires at 568.
But the number of people supporting charities has been falling even as the rich get richer, according to the World Giving Index. And it’s no wonder people are distrustful when it’s so difficult to access information on non-profits. Nine out of 10 charitable organisations in China failed to meet basic standards for transparency, according to a recent report from Peking University’s Center for Participation Studies and Supports that evaluated 93 charities across 31 Chinese provinces.
Scandals have also hurt the Red Cross Society of China, which is not affiliated with the International Federation of the Red Cross, but is one of the biggest humanitarian groups in the country. In 2013, the organisation admitted that nearly $12 million donated by Chinese artists to build an art school and support reconstruction work after the 2008 earthquake in Sichuan Province was redirected to other projects.

Under the new charity law, organisations no longer need a government sponsor but would have to demonstrate sound governance and legal compliance before seeking funds from the public. The stated aim of the law is to “build a comprehensive regime for the regulation and management of charity organisations in China.”
Charities that gather public donations are required to keep their administrative costs at no greater than 10 percent of the amount they raise in any given year. To help prevent fraud, groups are required to post clear information on their websites or use online donation gateways designated by the Ministry of Civil Affairs.
The law also introduces attractive new tax benefits. If a company's donation exceeds 12 percent in one year, the balance can be deducted from the company’s income over the following two years. However, this is contingent on whether the rules are consistently implemented by local tax authorities.
"The law itself is a big step forward. It was made through a revolutionary, entirely participatory process. Many academics and practitioners were invited into the drafting process, and [their suggestions] were heeded by lawmakers," Karla Simon, a scholar at the New York University School of Law and author of Civil Society in China, told IRIN.
Holly Snape, a Beijing-based analyst at the Tsinghua NGO Research Center, said the law is also a timely response to the explosive development of China’s mobile web.
“More people are using cellphones to shop and donate money, both in terms of numbers of people and amounts of money involved,” she said. “This naturally comes with much higher demands placed on charitable organisations for public reporting and transparency, proper auditing and so on.”

The law has its critics too.
Charities may now have their registrations revoked if they engage in activities deemed to “undermine state security or public interests”. Groups or individuals raising funds without a license will have to return donations and face fines of up to 200,000 yuan ($30,000).
“This law goes beyond what is necessary to build trust by restricting fundraising to government-approved groups only,” said Frances Eve, a researcher with the Network of Chinese Human Rights Defenders.
One group likely to be hit hard by the law will be friends and supporters of prisoners of conscience, who often put out calls for donations online, she said.
Rights groups accused the government earlier this year of planning to use a separate new Foreign Nongovernmental Organizations Management Law as part of a crackdown on critics. That law was passed in April but has not yet been implemented.
SEE: Activist arrest puts foreign NGOs in China on edge
jc/jf/ag
(TOP PHOTO: A boy stands near buildings destroyed in the 2008 earthquake in Sichuan, China, one year later. CREDIT: Red Cross Society of China)
Share this article
Join the discussion