Aid agencies in South Sudan are weighing their options after an intense outbreak of fighting in the capital left hundreds dead and tens of thousands displaced. Many soldiers from rival factions are among those killed and wounded. Aid agencies in Juba have spent the last few days largely hunkered down, with staff staying at home or sleeping at office compounds.

Some larger aid agencies have not been able to confirm the safety of all their staff, a task complicated by overloaded phone networks. NGO sources say some aid workers have faced harassment and threats at roadblocks. US-based NGO International Medical Corps announced that its maternity wing at a camp for internally displaced persons in Juba took a direct hit in the latest fighting.

Some aid agency compounds have become temporary shelters for civilians from the town, along with churches and other public spaces: WFP is hosting 3,000 displaced people at one of their compounds in Juba, a spokesperson told IRIN.

Today, chartered flights have resumed from Juba airport, eyewitnesses said, and some diplomats and expatriate aid agency staff are being pulled out. A military spokesman has said that the Ugandan army may be used to escort Ugandan nationals home by road, while Japan has mobilised military aircraft to the region to support the evacuation of its nationals.

Although the conflict has been intense, there may be a “desire not to evacuate” among humanitarian groups, according to the security analyst. The immediate needs of the wounded and displaced represent a critical humanitarian need, and lives are at risk, observers say.

“The humanitarian situation is grave and the needs are immense,” Matilda Moyo, a spokeswoman from the UN emergency aid coordination body, OCHA, told IRIN. As the airport was effectively closed until this morning, and the roads too risky, few aid workers have attempted to move until now. Planning has been around how to reduce staffing and mitigate the risks. Moyo said “all [UN] organisations have been requested to prepare a list of non-essential staff for evacuation planning in the case that the security situation deteriorates any further“. 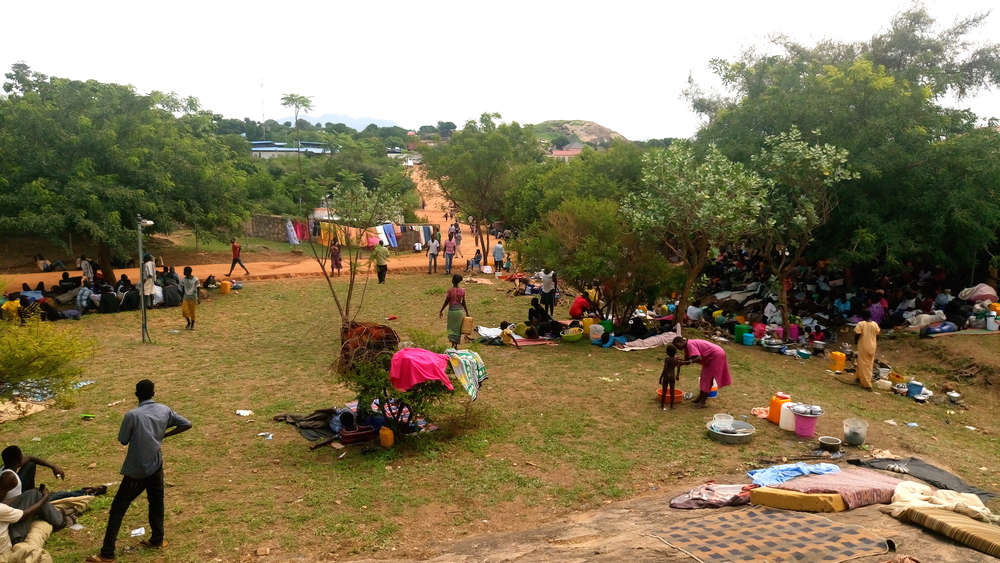 The NGO security analyst told IRIN that some smaller NGOs already had agreements to move their teams into better-protected compounds of larger agencies. The analyst added that the high turnover of expatriate staff in South Sudan was a concern, and relative inexperience and lack of local knowledge can lead to “overreaction” in high-risk environments.

In December 2013, NGOs and UN agencies in Juba were taken largely by surprise at the fighting and killings of civilians that followed the open power struggle between President Salva Kiir and Vice President Riek Machar.

Then, “there wasn’t a strong awareness of an impending conflict,” researcher Adele Harmer, of Humanitarian Outcomes, told IRIN. Her colleagues Abby Stoddard and Shoaib Jillani have been researching aid operations in conflict, including South Sudan, under a three-year research project, Secure Access in Volatile Environments (SAVE).

In 2013, there was ”a very quick withdrawal… including essential staff”, said Harmer. When aid agencies did move back in, “they were slow to scale up”, and much of the operational response, beyond the protection of civilians sites nominally guarded by UN peacekeepers, consisted of rapid response distributions of food and other items, not sustained programmes.

“We have a significant aid presence in South Sudan, but as is the pattern we found in our four-country study, aid operations are not running in the most insecure parts... where arguably the need is greatest,” Harmer said.

This time, the humanitarian community is “extremely aware of the volatility”, but Harmer says the question is, whether “they are going to be confident enough to keep the critical staff in Juba in the midst of conflict” to respond to the latest needs and make it worth them staying. “This time they have much more information, they know what it will take… hopefully that is the lesson learned from December 2013.”

“In December 2013, much of the personnel in the country were more development-focused. NGOs had to pivot the capacity of their teams to humanitarian response,” Lindsay Hamsik, of the the South Sudan NGO forum, told IRIN via email. The group has 126 INGO and 88 national NGO members. Hamsik said that “NGOs will be looking at staff reduction plans, but scaling down non-essential staff only”.

As non-essential foreign staff are moved out, what about those that stay behind? Humanitarian Outcomes found in 2014 there were 2,335 international and 20,538 South Sudanese aid workers.

Since independence in 2009, South Sudan has seen 71 aid workers killed, 64 of them South Sudanese citizens, and 103 wounded.

Most expatriate aid workers in South Sudan were at less risk, according to the research. “South Sudanese staff are considerably more at risk for direct targeting than internationals due to the ethnic dimension of the conflict,” the research found.  Pressure has grown for more humanitarian aid spending to flow to national NGOs. Their local knowledge, trust from the community, and networks, can sometimes make them less at risk in conflict. However, the security analyst said that more work was needed to help national NGOs in South Sudan and elsewhere “build their capacity to manage the risks they face”.

Staff from neighbouring Uganda are less safe. “Regional international staff have also been limited in where they may work, due to their country’s role in the conflict,” said the Humanitarian Outcomes research. “Ugandans, for example, were often not sent to field locations, and specifically not opposition territory.” South Sudanese civilians surveyed regarded the risk to foreign aid workers as minimal, Harmer said.

MSF has issued a statement on Twitter that it is likely to reduce its presence in Juba. Aid agency presence in high-risk environments has recently been the topic of a book, “Saving Lives and Staying Alive” by the MSF in-house think tank, CRASH. It takes a critical look at the “professionalised” and headquarters-driven security mechanisms of contemporary aid agencies. On the other hand it also takes aim at the “self-glorification” of risk-taking in aid work. It questions a quantitative approach, drawing conclusions from cataloguing incidents into databases that cannot take into account the specifics and context of each event.

Harmer argued that NGOs need to be more up-front about what they are trying to achieve, and what risks they are willing to take. They should place emphasis on “understanding the criticality of the nature of the intervention in relation to the risk… rather than just looking at the nature of the risk itself.

“What we would hope from this research, is that we are much more honest about what we can and we can’t do.”