Shortly before IRIN’s regular contributor in Yemen, Almigdad Mojalli, was killed in an airstrike, he took a trip to Jordan and had a disturbing realisation.

He had been working tirelessly to cover the war that had driven his country from humanitarian disaster to humanitarian catastrophe. He had spared no detail in describing the civilian casualties, nor the survivors so desperate they were eating out of garbage bins.

But in Jordan, he discovered that the war hardly made the news. Locals were shocked to hear what he had to say. Mojalli knew it was a struggle to get an English-speaking audience interested in his country, but he thought in a place with a shared mother tongue it might at least make a few headlines.

Before he fell victim to the war, which has claimed the lives of more than 6,000 people since March, the dogged Yemeni journalist was still struggling to understand why the world found it so easy to turn a blind eye.

Experts ask the same question. "It is absurd,” says Adam Baron, visiting fellow at the European Council on Foreign Relations. “This is one of the most devastating conflicts in the region, but people apparently don’t get it.”

IRIN went hunting for the answer. Here’s what we came up with:

In 1996, when the sitcom Friends was in its heyday, Matthew Perry’s character Chandler attempts to evade an on-and-off girlfriend by telling her he’s been transferred to Yemen.

The joke works because it's the furthest, most ridiculous place he can think of, where she can’t possibly follow him. The show’s dunce, Joey (Matt LeBlanc), doesn’t quite get it.

“Yemen, that actually sounds like a real country,” he says.

It’s not only in American sitcoms that Yemen is a byword for backwater. It’s a regional problem too – stereotyped as tribal and traditional, it somehow lacks the cultural standing of countries like Egypt, Syria, Iraq or Jordan. And in a region where oil is king, it has no great reserves. Even before the war, it was by far the poorest country in the Arabian Peninsula.

Apart from when the occasional “terror” plot is linked to a group operating in its mountainous hideouts and large wildernesses, Yemen is simply not a priority, regionally or internationally. The war was born of a failed political transition after Arab Spring-inspired protests, a movement dubbed the “forgotten revolution” long before the current fighting became Yemen’s “forgotten war.”

Farea al-Muslimi of the Carnegie Middle East Institute believes the country’s isolation is to some extent its rulers’ doing.

Low spending on education by Ali Abdullah Saleh, who ruled the country for 33 years, meant that contacts with the Western world were more limited.

Until a few years ago, he told IRIN, “it would have been easier to get an AK-47 in Yemen than an English dictionary.”

Lacking the same strong diaspora of an Egypt or a Syria, Yemen “is a country of untold stories,” al-Muslimi says.

It took two decades and two failed attacks against the United States traced to Yemen – including the infamous underwear bomber – to bring a high-ranking US official, then-Secretary of State Hillary Clinton, to the country in 2011.

Those trying to get the word out aren’t helped by the fact that the conflict is incredibly complex. It lacks the clear good guy v bad guy narrative many in the West saw at the start of the Syrian war, for example.

In Yemen, it never felt simple. This is a complicated civil conflict with local and international alliances that don’t appear to make much sense to the casual – sometimes even the studied – onlooker.

The trouble began long before the Saudi Arabia-led coalition began bombing in March 2015. Saleh had been battling a Shiite Houthi rebellion since 2004, but was only forced out in 2011 amid a power struggle with opposition leaders and their tribal militia, as the country was roiled by months of popular demonstrations against his rule.

His replacement, Abd Rabbu Mansour Hadi, is still the internationally recognised president of Yemen, but he was effectively ousted when the Houthi rebels took the capital in January last year, later fleeing to Saudi Arabia. That he is the leader of a united Yemen is his main claim to legitimacy, but he also happens to be on the same, tenuously allied side of southern separatists, anti-Houthi tribal leaders and Sunni Islamists.

While the Houthis are often portrayed as proxies of regional Shiite superpower Iran, they have their own grievances, leaders, and decision-makers. Confusingly, they are now also backed by Saleh, their former enemy. 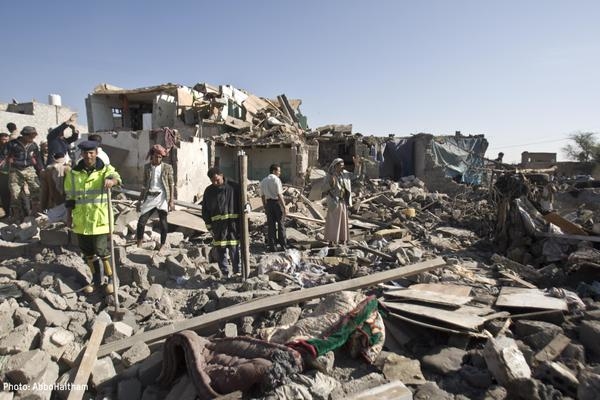 Oxfam
Airstrikes began last March and have devastated the country's infrastructure
Saudi Arabia entered the fray in March, accusing Iran of supporting the Houthis and forming a coalition of 10 Sunni-majority or Sunni-ruled countries, including all the members of the Gulf Cooperation Council, save Oman. In addition to almost non-stop airstrikes in support of Hadi’s forces, the coalition has imposed a naval blockade and put boots on the ground: there are even Colombian fighters sent by the United Arab Emirates.

Islamist groups have meanwhile taken advantage of the chaos to gain new territory. Al-Qaeda in the Arabian Peninsula (AQAP) and so-called Islamic State are both now present in the strategically important southern port of Aden.

No one seems any closer to actually winning the war, so it is harder to become invested in its outcome, especially as neither side has made any real move to negotiate and UN-led peace talks have been postponed.

"The fact that it has long been enmeshed in one conflict or another makes it is easy for people to shrug it off,” says Baron. “They recognise that Yemen is at war, but see it as always at war.”

Surely the United States, Britain and France – all of whom either provide logistical support or sell arms to the Saudis – have reason to care?

A report by a UN panel of experts on Yemen, leaked last month, found the Saudi-led coalition had carried out “widespread and systematic” attacks on civilian targets in violation of international humanitarian law.

Human rights groups have been pressuring the UK in particular to reconsider its arms sales to Saudi Arabia, which last year were at a record high – 2.8 billion pounds ($4.2 billion) in the first three quarters alone.

That’s dwarfed by American sales. Since September 2014, US President Barack Obama’s administration has informed Congress of arms sales to Saudi Arabia totaling more than $21 billion. Some members of Congress have spoken out against a proposed $1.29 billion deal on air-to-ground munitions because of how they might be used in Yemen, but the sale appears poised to go ahead.

Last week, US Senator Chris Murphy called for his country to get out of the war, but he is for the most part a lone voice.

"I just don't see any evidence right now that the Saudis are conducting that military exercise in a way that's responsible. It's just feeding the humanitarian crisis inside Yemen," Murphy said.

The fact is that intelligence sharing with Saudi Arabia has been a key part of US and UK foreign policy for years, and they consider the kingdom a stabilising force in the region. With the Houthis attacking its borders and Saudi Arabia raising the threat of Iranian influence, the West is unlikely to rein its allies in.

The media, meanwhile, gravitates towards the bigger regional conflicts in Syria and Iraq, whose impact on the West is so much clearer to define in terms of refugees, extremist attacks, and geo-political dangers.

There is also a sense of crisis fatigue, a feeling that the audience can’t find room to process Yemen when their minds are already saturated by so many other, more pressing emergencies.

“It is sadly a forgotten conflict in many ways,” says al-Muslimi. “Everyone is overwhelmed with Syria, the rise of ISIS in Libya, and the world is quite a messed up place to start with.”

Why we should care

The World Health Organization counts more than 6,000 conflict related deaths in the last 11 months. Given that Yemen’s health system is decimated – there’s a lack of supplies, not to mention 69 facilities damaged or destroyed – and 14.1 million Yemenis lack sufficient access to healthcare, it’s safe to say the real number is higher.

OCHCR, the Office of the High Commissioner for Human Rights, told IRIN by email that it recorded 318 civilian casualties in January: 118 killed, 200 injured. This brings estimated civilian casualties since March 2015 to 8,437: 2,913 civilians killed, 5,524 injured.

By comparison, after a year of conflict in Syria, the UN was reporting 7,500 deaths.

UN agencies and other aid organisations are struggling to cope with the severity of the humanitarian crisis, with their access to conflict zones restricted and an ongoing siege in the city of Taiz.

See: Smuggling oxygen on a camel

Some 19.3 million people lack access to clean water or sanitation, and almost 320,000 children are severely malnourished.

“The needs are huge, so there is no way that humanitarian organisations can cover all of them,” Julien Harneis, UNICEF’s Yemen country director, told IRIN in December.

Maybe, in today’s social media-dominated news environment, Yemen just needs its viral moment. It took a photo of Alan Kurdi, the drowned Syrian toddler lying facedown on a Turkish beach, to bring the world’s attention to the refugee crisis.

But those, like Salisbury, who realised the scale of the humanitarian disaster and the risks of the war in Yemen long ago, are fairly exasperated.

“With the people who know or who have worked on Yemen, there is fatigue from people jumping up and down and saying, ‘Yemen is important,’” he explains.

Ultimately, “people will be asking this question: Why didn't we pay more attention to Yemen? Why didn't we take it more seriously when we had a chance to do something?”