The beginning of 2016 has marked another low point in Europe’s response to the refugee crisis. Will the year ahead see a further race to the bottom? Or will member states learn the lessons of 2015 and find the necessary consensus to humanely manage the arrival of hundreds of thousands more refugees?

The events in Cologne on New Year’s Eve could hardly have come at a worse time for refugees hoping to find protection and a new life in Europe: as reports emerged that asylum seekers and migrants were among the perpetrators of sexual attacks and robberies, a predictable backlash gained momentum. Chancellor Angela Merkel responded by proposing new legislation making it easier to deport those who commit crimes, but she has so far resisted mounting pressure to set a limit on the number of asylum seekers Germany will admit in 2016.

By last week, Germany stood virtually alone in Europe in its largely welcoming policy towards refugees. Sweden, which together with Germany and a couple of other countries took in the majority of the more than a million asylum seekers who made their way to Europe in 2015, began the new year by introducing border controls that saw people arriving from Denmark who could not produce identity documents being turned away. Denmark quickly followed suit with similar restrictions at its southern border with Germany.

Other member states have shown little interest in taking in their fair share of asylum seekers. Many have implemented legislation that restricts the type and length of permits they offer and makes it more difficult for refugees to bring family members to join them.

Perhaps most shockingly, the Danish government is considering a law that would give authorities the power to confiscate jewellery and other valuables from arriving asylum seekers as a way of covering the expense of hosting them.

“You see an increasing trend of a race to the bottom in terms of asylum policies at a national level,” commented Kris Pollet, senior legal and policy officer with the Brussels-based European Council on Refugees and Exiles. “It almost looks like we’re back to 15 years ago, before the idea of a Common European Asylum Policy was in place. Rather than addressing the current situation, it’s all about saying: ‘Don’t come to my country’”.

That message is echoed by EU officials, who on Thursday announced that a top priority over the next six months is to reduce the number of asylum seekers arriving in Europe.

So far, no one has figured out how to do this, beyond passing the buck to other countries. However, there are a raft of measures on the table that we’re likely to hear more about as spring approaches, and with it the prospect that the number of new arrivals – stubbornly high even now in mid-winter – will once again reach the record levels we saw in September and October.

Sweden and Denmark are only the latest countries to implement border controls, an emergency measure allowable for a period of up to six months, according to the Schengen Borders Code. Germany introduced controls at its border with Austria last September, largely as a way of managing the chaotic arrival of around 10,000 asylum seekers a day via the Balkan route from Greece. Security concerns following the terror attacks in Paris in November saw France impose its own border controls, while various countries along the Balkan route – including Macedonia, Serbia, Croatia, and Slovenia – have only been allowing people from Syria, Iraq, and Afghanistan to cross since mid-November.

Hungarian soldiers constructing a fence at Hungary's border with Serbia where 155,000 migrants and r 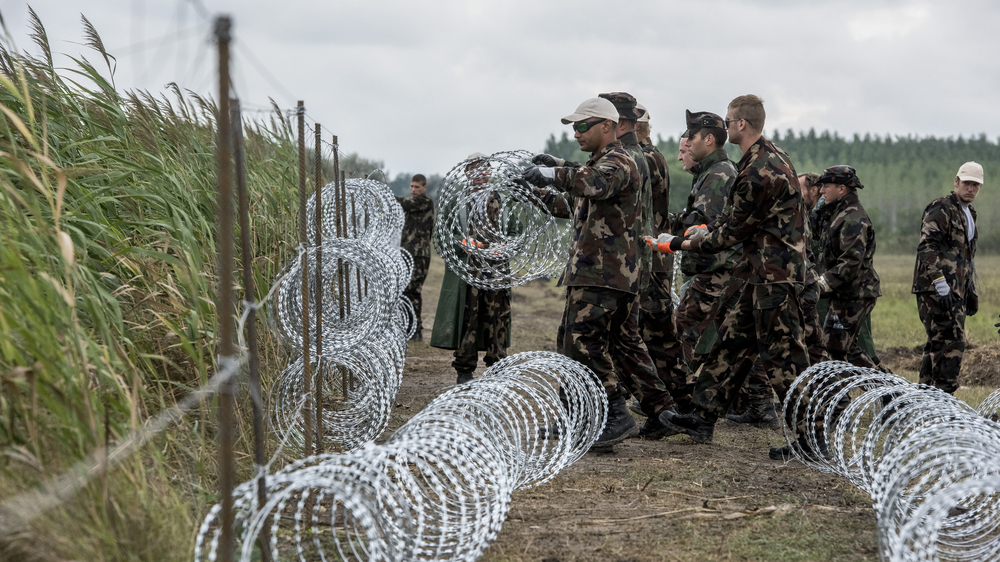 Such measures only have a limited effect as long as Europe’s external borders are not secured. They also have major consequences for the free movement of EU citizens, many of whom commute across previously invisible national boundaries on a daily basis. Hence, the European Commission’s December proposal to introduce a European border and coastguard agency – basically Frontex, the EU’s current border agency, but with teeth. Currently, Frontex’s limited mandate means it can do little more than assist member states when called upon. The new agency, which would absorb Frontex and have greater resources, would have the authority to intervene in border control even without the consent of member states. Whether or not countries like Greece will accept the idea of ceding border control to an EU agency remains to be seen.

Ramping up pressure on Turkey

Europe finalised an agreement in late November that offered an initial three billion euros to Turkey to help support its 2.2 million Syrian refugees as well as various other incentives, in return for action to stem the flow of migrants and refugees using the country as a springboard to Europe.

Apart from an initial flurry of arrests of refugees trying to set off in smugglers’ boats from the Turkish coast, the agreement has so far not yielded the results EU officials were hoping for. A daily average of 3,300 migrants and refugees continued to arrive in Greece during December, despite winter weather conditions.

“We are a long way from being satisfied,” Frans Timmermans, vice-president of the European Commission, reportedly said last week.

Merkel, who championed the deal with Turkey, will be left even more isolated in her approach to the refugee crisis if it fails.

“Officially now, everybody says that they want to reduce the numbers this year,” said Karl Kopp of the German human rights organisation PRO ASYL.

“The Merkel approach is to work with Turkey, which is really a terrible mistake,” he told IRIN, citing the incentives the agreement gives Turkey to intercept and “pull back” boats carrying refugees.

Merkel is also pushing for other member states to join Germany in accepting much larger numbers of refugees directly from Turkey as a quid pro quo for its assistance in slowing the irregular flow of asylum seekers to Europe. But early indications are that states won’t sign up to the voluntary resettlement scheme until they see more evidence that Turkey will meet its end of the bargain.

Elizabeth Collett, director of the Migration Policy Institute Europe, nevertheless predicts that 2016 will see an increasing emphasis on how to resettle larger numbers of refugees.

“The main challenges are that of scalability and political will,” she told IRIN.

Reform of the Dublin Regulation

In March, the European Commission will release its proposal for reform of the Dublin Regulation, designed to determine which member state is responsible for processing an asylum claim. In practice, northern EU states have often used Dublin as a way of abdicating responsibility for asylum seekers who initially register in frontline states such as Italy and Greece.

The regulation has already been through three revisions, with the most recent version – Dublin III – coming into force in January 2014. In its present form, it still allows countries largely unaffected by the refugee crisis, such as the UK, to return asylum seekers to already over-burdened and under-resourced countries like Italy, Bulgaria, and Hungary (Greece has been exempt from Dublin returns since 2011 due to concerns about its reception conditions).

The Commission’s reform proposal is likely to incorporate elements of the relocation scheme adopted by member states in September – the key aim of which is to relieve pressure on Italy and Greece by transferring 160,000 asylum seekers to other states.

The scheme has so far resulted in just 272 asylum seekers being relocated, while member states have offered up just 4,207 relocation spots.

“Anyone who’s watched EU legislation over the last decade knows there was no hope for this relocation scheme to really be successful in the context of a crisis,” said Collett. “It’s difficult to see how it might replace the Dublin principle when you look at the numbers who’ve been relocated so far.”

Going forward, she added, “the real tension’s going to be… maintaining a system of solidarity that everyone can buy into and where there are as few free-riders as possible.”

So far, EU solidarity is the ingredient that has been missing from virtually every attempt to resolve the refugee crisis. At the beginning of 2016, it appears more elusive than ever as populist, right-wing governments hold sway in much of Central Europe and leaders everywhere bow to electoral pressure to make policy decisions based on fear and xenophobia.

“Compromise in the next few months seems unlikely,” said Collett. “For the EU, this isn’t just one crisis, it’s a crisis of EU institutions and frameworks.”

The key to finding effective solutions lies with Berlin rather than Brussels, said Kopp.

“It’s quite clear more refugees will come – its wintertime and they’re still coming,” he told IRIN. “That means that if Merkel is not able to keep the door open in Germany and to involve more partners in Europe, the whole situation will collapse.”