The world has its first universal climate accord.

Adopted late on Saturday night, on a small airstrip on the periphery of the French capital, the Paris Agreement is a landmark deal that brings together 196 nations, uniting them in the fight against climate change and its impacts.

Nearly two weeks of intense negotiations have been synthesised into a single 31-page document, representing a balance of interests; a document of consensus for countries at different levels of development and with different capabilities.

For rich and poor, there are wins, but there are also disappointments. Climate justice groups say it's a deal that won’t protect the most vulnerable, and they’re partly right.

Even with all the different elements of the Paris Agreement – including 187 voluntary national emissions-cutting plans called Intended National Determined Contributions (INDCs) – scientists estimate we are currently on course for a global temperature increase of 2.7 degrees Celsius from pre-industrial levels by 2100.

At the Copenhagen talks in 2009, countries agreed, with advice from scientists, that 2 degrees Celsius was the limit above which dangerous, potentially catastrophic, irreversible climate change would occur. The most vulnerable countries, especially small island states who will have to grapple with loss of landmass due to rising sea levels, think that’s still too high. They have been lobbying for an absolute cap on global warming at 1.5 degrees Celsius.

In Paris, many delegations wore “1.5 to stay alive” pins. They have had some success.

There is ambition – more than many observers believed would be possible in the negotiations – but not detail.

The Paris Agreement includes a temperature limit of “well below 2C”, and says there should be “efforts” to limit it to 1.5C. It asks the Intergovernmental Panel on Climate Change (IPCC) to provide a special report in 2018 on the impacts of global warming of 1.5C.

How this ambition translates into actual emissions cuts is yet to be decided. Crucially, the Paris Agreement acknowledges the “gap” between countries’ present commitments and what’s needed to prevent dangerous levels of climate change.

2. Parts of it are legally binding, but not emissions cuts

Emissions cuts have been left up to national governments, and while they’re not legally binding, the architecture of the system within which they’re made, monitored and reviewed is.

The Paris Agreement includes a process to ramp up action on emissions every five years. In 2018, there will be a “facilitative dialogue” to take stock of the collective efforts of countries. By 2020, countries will have to submit new or updated national climate plans, and continue doing so every few years after that – with each one more ambitious than the last.

Alongside that, there’s a five-yearly “Global Stocktake” beginning in 2023 of all actions: adaptation, finance and support, as well as emissions cuts.

There is an emphasis on transparency, with all countries bound to report “regularly” on their emissions and efforts to reduce them. For developing countries, there are “flexible” rules on reporting, taking into account their capacities to do so.

But there’s also a black hole in the system: critics point out that the text does not address international aviation or shipping emissions, which, if they were a country, would be the world’s 10th largest emitter.

It is effectively a promise to try to reach zero net emissions in the second half of this century.

It’s an impressive sentiment, but lacks a specific timeline.

The accord allows the voluntary use of “international transferred mitigation outcomes” – in other words, emissions trading – with provisos including “environmental integrity” and no double-counting.

It does, however, speak of “universal access to sustainable energy in developing countries,” in particular in Africa, through the enhanced deployment of renewable energy.

There’s no mention of fossil fuels; not even once.

This is perhaps the heart of the potential impact of the Paris Agreement: providing a foundation – and impetus – for investors to make different decisions, for countries to change the way their economies work and how people live. It is about making a global transition to a green economy.

The Paris Agreement makes a conscious effort to be balanced.

Throughout the text, the concept of “differentiation” is enshrined: countries based on their level of development and historical emissions have “common but differentiated responsibilities and respective capabilities”.

It also makes an important concession when it comes to emissions cuts – a nod to large, emerging economies – adding that they will be done “on the basis of equity, and in the context of sustainable development and efforts to eradicate poverty.”

5. There's a recognition of loss and damage – but no money for it

It was one of the most divisive issues in Paris: how to deal with the devastation wrought by climate change, despite attempts to adapt to its impacts. It includes the landmass loss as a result of rising sea levels, the destruction caused by adverse weather events, the loss of livelihoods or health as a result of changing weather patterns.

For the first time, “loss and damage” has its own section in an agreement, a recognition of just how critical an issue it is for many nations.

It speaks of "averting, minimising and addressing loss and damage associated with the adverse effects of climate change, including extreme weather events and slow onset events, and the role of sustainable development in reducing the risk of loss and damage". 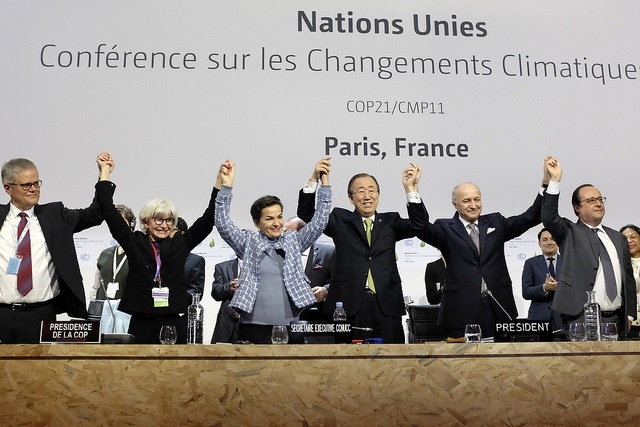 Many of the Least Developed Countries and Small Island States at COP21 reiterated that no matter what actions are taken now, some will struggle to deal with the climate change impacts of what’s already been done.

The Paris Agreement establishes a task force on climate change-related displacement, and a “clearinghouse” for risk transfer – a form of insurance. It requests cooperation between countries on early warning systems, emergency preparedness, information sharing on slow onset events, comprehensive risk management, the resilience of communities, livelihoods and ecosystems; and “non-economic losses”, recognising the cultural losses that could result from climate change impacts.

There was a trade off – with the United States leading the charge. The Paris Agreement is clear: it does not involve or provide a basis for any liability or compensation from emitters.

But there is provision for finance.

6. Poor countries will get money – we're just not sure how or how much

In line with the green economy transition that forms the heart of this deal, the purpose of the agreement states that all financial flows — both public and private — need to be shifted from high to low emissions activities and from risky to resilient investments.

In Copenhagen, rich countries promised to give $100 billion a year from 2020 to 2025. The Paris Agreement confirms that, adding that this number is only the “floor” of climate finance and that there is an intention to scale this up. It acknowledges the financial contributions of developing countries, saying they can continue to make voluntary commitments to giving further cash.

What happens after 2025? The accord suggests that governments will adopt a new, higher, collective goal – but doesn’t specify how much, and who from.

Countries have promised to improve reporting on finance – a contentious issue throughout the negotiations – with all providing information about monies provided or received.

Crucially, governments have committed to balance public funding between mitigation efforts and adaptation, significantly increasing adaptation support before 2020; helping the most vulnerable countries deal with the impacts of a warmer world.

7. There'll be help for countries to adapt

Some of the world’s poorest countries will be the hardest hit by climate change: a matrix of poverty combined with less predictable weather patterns, a reliance on agriculture, and less resilient infrastructure.

Helping countries adapt features heavily in the Paris Agreement – on a par with mitigating its effects. It establishes a “global goal” on adaptation of “enhancing adaptive capacity, strengthening resilience and reducing vulnerability to climate change”.

Similar to the five-year cycle for reporting emissions cuts, the deal binds countries to engage in an adaptation planning process, saying they should “submit and update periodically” those strategies. Support will be provided to developing countries for planning, implementation and communication of adaptation activities.

8. There's an acknowledgement of human rights

But only in the preamble.

It tells countries that, when taking action to address climate change, they should “promote and consider their respective obligations on human rights, the right to health, the rights of indigenous peoples, local communities, migrants, children, persons with disabilities and people in vulnerable situations and the right to development, as well as gender equality, empowerment of women and intergenerational equity.”

Re-inserted into the text at the last minute, it is a reminder that even in the face of grave and urgent climate change challenges, nations must not compromise the fundamental rights of their citizens.

In the words of French Foreign Minister Laurent Fabius – president of COP21 – the agreement is “differentiated, fair, durable, dynamic and legally binding.”

The Paris Agreement is more ambitious than expected, and makes a distinct effort to balance the interests of both rich and poor nations. What it contains will not protect the most vulnerable, but it also acknowledges that’s the case.

Above all, it is a foundation upon which future climate action can be built: it provides, crucially, a united objective and a shift in thinking, alongside renewed trust in a multilateral process and momentum, which allows for perhaps the most critical element of all: hope.