Two seasonal migrations are taking place in Greece’s eastern Aegean islands. One is welcomed as the lifeblood of the local economy. The other is part of an escalating humanitarian crisis on Europe’s eastern flank.

Air terminals and ferry ports are packed with holidaymakers wearing minimal clothing in the sweltering heat.

At the same time, every day, hundreds – sometimes thousands – of people land on Lesvos’ northern beaches wearing all they possess in the world.

More than 160,000 migrants and asylum seekers have arrived in Greece since the start of the year, according to the UN refugee agency, UNHCR. The numbers have spiked in recent weeks, threatening to overwhelm already stretched local authorities.

On Lesvos, the numbers are also challenging those of us trying to help, not least because the headline figure represents a population that is constantly shifting rather than a fixed group. Most people only stay here a few days. That makes providing anything more than basic care impossible, and following best practice for emergency response improbable.

The 7-km journey across the sea from Turkey takes about an hour, depending on conditions at sea. The flimsy rubber dinghies are invariably overcrowded and the majority of passengers can’t swim.

The experience is terrifying – another trauma added to the layers that many have already accumulated through the wars in Syria, Iraq, Afghanistan and South Sudan.

“It was a nightmare,” one young man from Damascus told me. “I don’t know how we got through that trip.”

But still they come.

Seasoned aid workers – veterans of the recent Ebola outbreak in West Africa and the sprawling refugee camps of Jordan – describe the humanitarian crisis here as one of the most politically confounding they have witnessed.

Few imagined they would ever be working inside Europe, spending their days in overcrowded emergency reception camps and their evenings in air-conditioned tourist cafés.

The juxtapositions are stark and uncomfortable.

Lesvos is easily accessible; phones and Wifi work. There was no natural disaster, no conflict, no drought or famine. That can make it a hard sell to donors.

And shouldn’t European governments be able to sort this crisis out themselves without drawing on the resources of overstretched international humanitarian agencies? Or so the argument goes. But Greece is mired in economic and political turmoil; the Eurozone is still recovering from its currency crisis; and ‘European solidarity’ has already been stretched to the limit in bail-out deals for poorer countries like Greece.

In any case, this isn’t just a European issue. What we are seeing is a consequence of failing to act effectively to address the crises from which people are fleeing. The impact of wars in the Middle East and North Africa are now being felt well beyond the geographic regions where they started.

As the semantic debate about whether to call them migrants or refugees rumbles on, those arriving in the eastern Aegean have one thing in common: a desire to escape the past and seek new lives in Europe. Greece is rarely their destination of choice – it is simply the gateway to the European Union.

When I met Burak*, 20, he had been on dry land for less than an hour. There were 40 people crammed onto the boat that had brought him here, he told me, most from Syria. This was the second time Burak had attempted the journey from Turkey. The first time the boat was forced back by rough seas.

He was exhausted – salty from the sea, sweaty from the heat and impatient to know when the bus waiting to take new arrivals to be registered in the main port of Mytelene would be leaving. He wanted to get to the Netherlands or Germany, he said. How will you get there, I asked? “We’ll walk,” he replied without hesitation.

Firas*, a second-year medical student from Damascus, was also planning to reach Germany to enrol in a university there. He had given up hope of being able to qualify as a doctor in Syria. “We have lost our country,” he told me.

These are not people looking for a life spent relying on welfare or charity. They believe, perhaps naively, that in peaceful Europe they will be able to resume their previous careers as pharmacists, teachers, tax accountants or students, and educate their children.

But in order to continue their journeys, arrivals in Lesvos must first register with the local authorities and wait for permission to travel onwards. That may take a few days or a few weeks.

In the meantime they need somewhere safe to stay.

Kara Tepe sits on a hillside a few miles outside the main port of Mytelene. Part olive grove, part motorbike training ground, it is hardly an ideal site for an emergency camp.

Pieces of ripped canvas flap in the breeze, the acrid smell of soiled groundsheets fills the nostrils and frayed guy ropes are held down with heavy boulders or tied around the branches of the olive trees, doubling as washing lines. 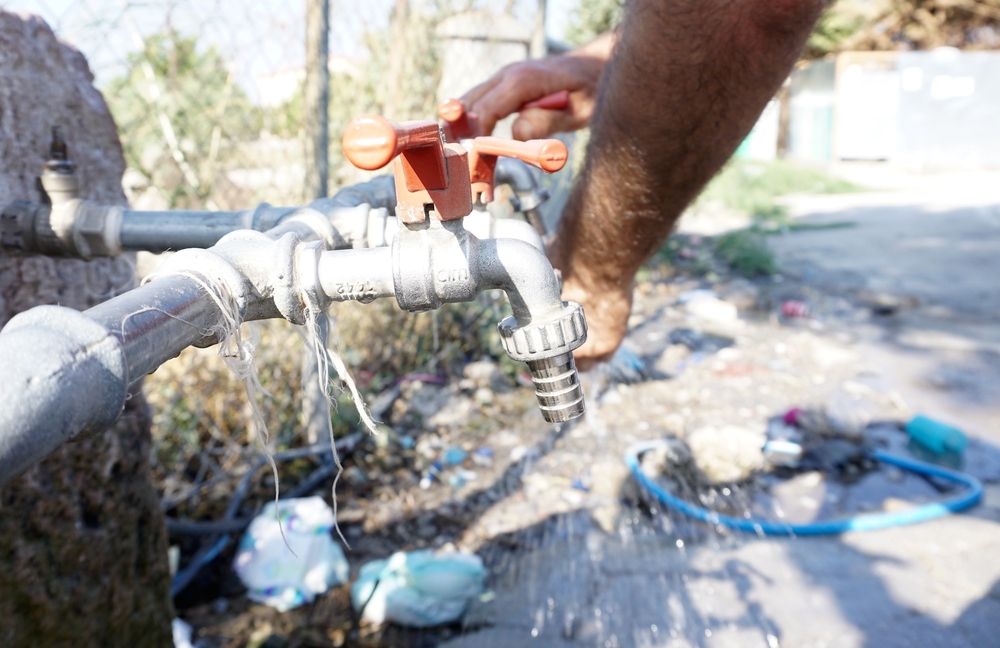 Some people have chosen to spend some of their precious savings on small pop-up tents, on sale from opportunistic local providers.

The effect is a little like a cross between a scout camp circa 1960 and the aftermath of a low-budget summer festival, but with none of the fun and freedom.

Organisations such as Médecins Sans Frontières, the International Rescue Committee, UNHCR and ShelterBox are working in support of the local municipality on Lesvos to try to improve conditions in the congested camp.

Fresh water taps and open-air showers have been fitted, latrines have been upgraded, rubbish collections organised and health clinics provided. Over the coming weeks, the ramshackle shelters will be replaced with new robust family-sized tents better designed to withstand the heat, wind and dust.

Things are slowly improving but it is a challenge to properly assess the needs of a population that is constantly changing. One day there seem to be children everywhere. The next, they and their families are gone, having received the precious document that allows them to catch the ferry to Athens.

High-minded notions of community participation, of asking what people might actually find useful rather than one-size-fits-all solutions are impossible in such chaos.

Target the most vulnerable? You try. Ensure the protection concerns of women, children, the disabled and the elderly are taken into account? You do your best. Collect accurate demographic data? Forget it.

This is not the kind of response where you can plan for the long term. You simply try to provide a secure, clean, weather-proof environment for people to rest and recover with some degree of dignity before they move on.

*Names have been changed to protect identities