Are homicide statistics just another number crunching exercise or a helpful indicator for humanitarian intervention?

The Homicide Monitor, a new, interactive online tool that collates country-by-country statistics on homicides from a range of sources, an initiative the Brazil-based Igarape Institute launched this week, is intended to stimulate debate around homicide statistics and draw attention to the world’s hotspots.

“Making information available about homicide is the first step towards doing something about it,” says Igarapé Institute research director Robert Muggah. According to the Homicide Monitor, between 437,000 and 468,000 homicides occur around the world each year. While rates are very high in Latin American countries and some other parts of the world, they are in steady decline in Europe, the US, Canada, Australia and Asia.

“Homicide rates are an interesting indicator of what’s happening in a country,” says Olivier Bangerter, Thematic Team Coordinator for the World Humanitarian Summit. He adds: “Understanding how widespread lethal violence is gives us an understanding of the challenges countries face, whether from a humanitarian, human rights or a development perspective. As a humanitarian it’s always very useful to understand who is vulnerable, and to what.”

Where homicide rates exceed 40 per 100,000 of a country’s population, but where there is no outright armed conflict, some humanitarian organizations may use the designation “other situations of violence” to indicate the need for involvement.

“While not perfect, homicide is a proxy for a much wider set of insecurities,” says Muggah. “It is often the most visible instance of crime,” he adds. “Where we see high rates of homicide, we are likely also to have high rates of injuries, disappearances, and most likely other kinds of criminal violence.”

The fear linked to these wider insecurities can also drive displacement. See: The Price of Fear

A wealth of data

Enrico Bisogno, Team Leader of Crime Statistics at UN Office on Drugs and Crime (whose data the Monitor uses) agrees. Homicide statistics  “are the best possible indicator of violence in any country at any given time, because homicide is the most ultimate crime”. Homicides statistics reveal much about violence – not just about numbers killed, but about where the crime takes place, by whom and with what weapon, he says. 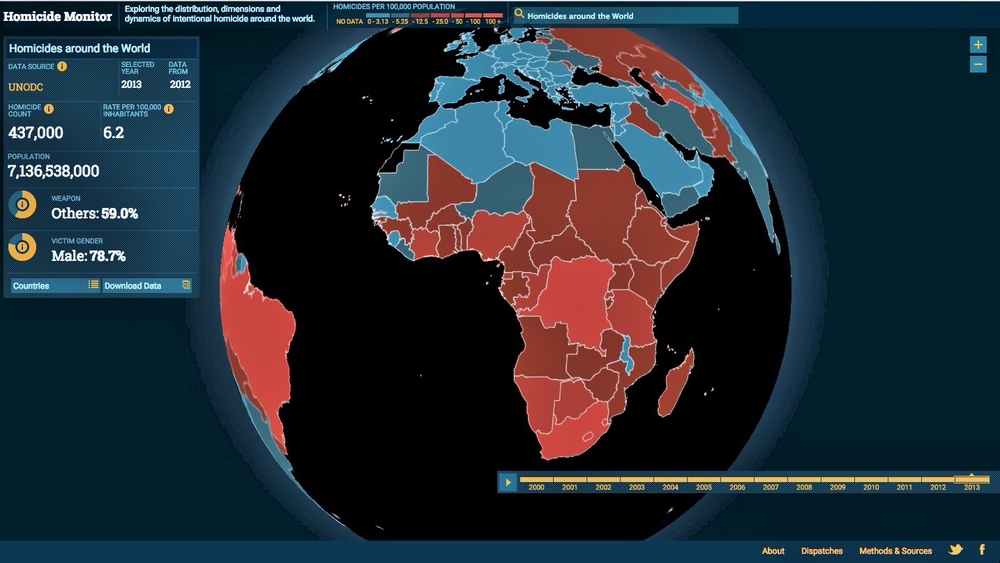 UNODC, which publishes a bi-yearly Global Study on Homicides, is lobbying to include homicide as one of the key indicators for the Sustainable Development Goals. According to the Global Burden of Armed Violence 2015: Every Body Counts, between 2007 and 2015 at least 508,000 people – including 60,000 women and girls – died by violent means, mostly not in situations of armed conflict.

Publishing global homicide figures is a recent phenomenon, and more countries are honing their capacity to capture the data. The Homicide Monitor is the latest contribution to the global picture, filling in the blanks with more information such as gender breakdown of victims and types of weapons used. While UNODC gathers annual statistics from 110 countries, the Homicide Monitor has compiled data from more than 219 countries and territories and is, according to Muggah, “the most comprehensive publicly available data set”.  The Monitor’s statistics are drawn from UNODC, the World Health Organization, national statistical offices, police departments and more, he says.

All those interviewed by IRIN said they had confidence in the steps that Muggah and the Igarapé Institute had taken to collate and present the statistics as accurately as possible. However, Muggah himself acknowledges the limitations of homicide data - starting with varying definitions of the term. For example: some countries distinguish between intentional and unintentional homicides and some only count homicides after a perpetrator has been arrested and prosecuted. And while UNODC does not include lawful deaths at the hands of the police, WHO does.

“Igarapé Institute researchers often triangulated multiple counts, virtually always selecting the most conservative registered figures. As a result, there is a possibility that the Homicide Monitor undercounts the total scale of homicide,” says a fact sheet on the model.

Bisogno says there is often criticism about the accuracy of homicide data but the fact that the data emanate from both health and criminal justice quarters “is a good way to validate the stats.”

Muggah adds that the involvement of public health agencies in compiling statistics has taken “some of the political sting out of the debate”.

Now that UNODC has developed international definitions for all categories of crime, including homicide, the picture is likely to get more accurate, Bisogno says. These definitions were published in March.

Many countries, particularly in Africa, lack the capacity to report statistics, and many homicides go unreported. Other nations, fearing repercussions for tourism and investment, refuse to do so. Those that are good at collecting their data risk being victims of their own success, says Bisogno, by unwittingly advertising high rates. South Africa, for example, has very accurate crime statistics compared to most other African nations, and also has a very high homicide rate.

Governments and civil society organizations can both deflate or inflate figures for their own purposes. “Anyone trying to ascertain how many people die may have a bias – this is not necessarily in bad faith, says Bangerter, adding that cross-checking several sources of data is the best way to get the most accurate results.”

Another problem is how to draw the line between criminal and political armed violence. As organized crime infiltrates political and government institutions, this line grows increasingly blurred.

A para-military officer keeps watch over suspects during a swoop to root out members of the outlawed Mungiki sect in Mathare, Kenya, 7 June 2007. 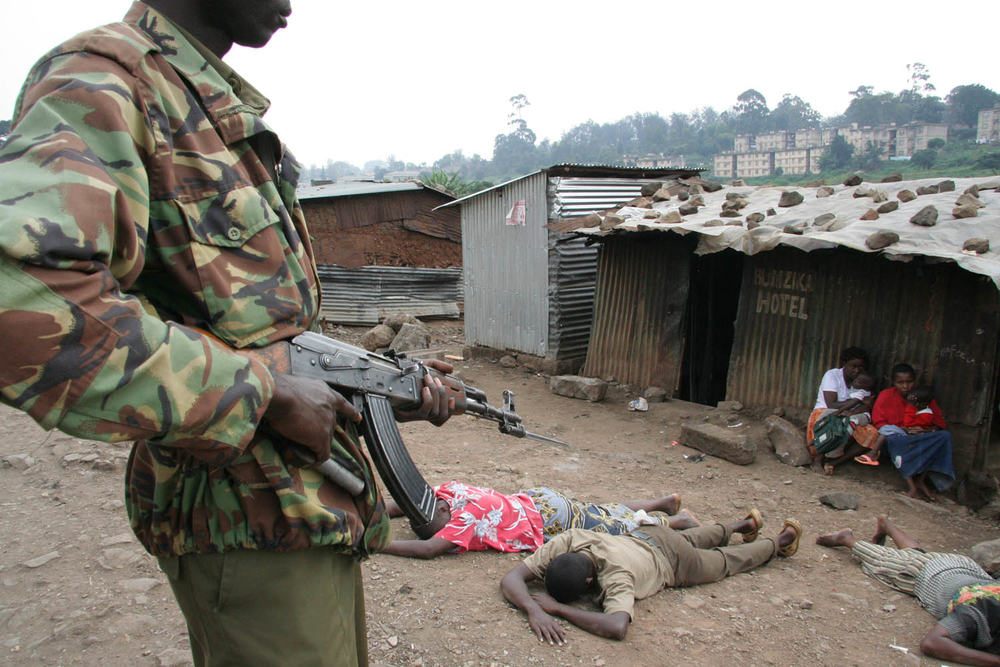 Graeme Simpson, director of the US branch of Interpeace, a peacebuilding NGO, says he welcomes any contribution to the growing conversation around “the constant, seeping, underlying [criminal] violence” which claims more lives than political conflict but which nevertheless attracts much less attention from the world’s humanitarians, peacekeepers and peace builders.

Using homicide statistics is a reliable way to go about gathering information on this kind of violence, he adds, because it’s about counting actual bodies. The challenge, he adds, is to dig beneath the bland figures and find out what is driving the violence in the first place. “It’s important that we don’t just focus on security responses to bring down the statistics and paper over the cracks, but on social crime prevention strategies.”

Another important question, Muggah adds, is not just how high or low homicide rates are, but “who is being killed and who is doing the murdering. In almost all settings, young males are the most likely to kill and be killed,” he says.

And counting the bodies doesn’t tell us much about the individuals who have lost their lives and the circumstances surrounding their deaths. Everett Ressler, advisor to Every Casualty, an organization that lobbies for the identification, documentation and public acknowledgement of every person who dies a violent death around the world, says: “We need to know the facts. A number is only a part of the story. There is a deeper and more fundamental aspect.”

“Human rights are as much about death as they are about life,” he says. “The best interests of humanity are not served by people hiding the facts about death. Every effort should be made to make these facts public and non-political,” he adds.