In the immediate aftermath of a disaster of the scale of Nepal’s 7.8-magnitude earthquake, the scramble by aid agencies to respond can easily descend into chaos.

Following the earthquake that killed 220,000 Haitians in 2010, the influx of hundreds of aid agencies and civil society organisations – many with no prior knowledge of the country – proved impossible to fully coordinate and in some cases was actually detrimental to the response, according to an assessment by the UK’s Department for International Development (DFID).

Have aid agencies learned from the mistakes of the past? And will their presence in Nepal be more of a help than a hindrance to the emergency response?

“We do not want Nepal to be a dumping ground for aid and personnel,” Rameshwor Dangal, chief of the Disaster Management Section in the Ministry of Home Affairs, told the German news agency DPA. “It's very hard to manage a crowd in such dire situation. In the name of support the international community should not dump unnecessary items on us.”

In more diplomatic terms, he told IRIN: “We are trying our best but we are overwhelmed by different kinds of responsibilities… We really need the relief materials more than people. If there are many people, it’s difficult to coordinate.”

And yet, teams of relief workers and their supplies are already congesting Kathmandu’s small international airport – from the big all-round players like Oxfam and World Vision and the smaller, specialist organisations like WaterAid and ShelterBox to the well-meaning efforts of individuals like Alison Marston who will be flying into Kathmandu later this week with a modest sum she has raised from donations and strong local contacts having lived there for many years but no clear idea of how she will contribute to the response.

“People were looking for something that wasn’t one of the big organisations so I rather greenly started my fundraising and didn’t go in with a strategy and it sort of snow-balled from there,” she told IRIN. “I’m in a position where I know Nepal very well and I can well assess where the needs are going to be on the ground and the whole aim of this is to collaborate with other small, grassroots organisations.

“I’m not envisioning much coordination with larger organisations. I think I can make a difference in areas where they’re not,” she added.

For Chris Blackham, director of programmes at the London office of Samaritan’s Purse, a US-based international relief agency that has dispatched a team to Nepal, “every little bit helps”, especially in the early stages when needs are so high, providing the help is well-coordinated.

For many others, Martson’s unilateral approach is problematic.

“Ways to NOT help #NepalEarthquake: Give to new charities that suddenly pop up (often scams), collect stuff to send, try to go yourself,” political science student Laura Seay tweeted as part of a growing protest on social media against well-intentioned but ill-advised giving.

Ways to NOT help #NepalEarthquake: Give to new charities that suddenly pop up (often scams), collect stuff to send, try to go yourself.

“There’s always the danger of a situation like Haiti, but the humanitarian community is a lot better at coordinating than then; they learned a lot from Haiti,”  Blackham told IRIN.

“Where organisations come in and don’t coordinate, then it can be a hindrance. But in my experience that is happening less these days. Haiti was a big turning point,” he said.

Tom Palakudiyil, head of the South Asia region for WaterAid, agreed that the quality of coordination has improved in recent years. Still, he said, “there’s obviously need for constant improvement because even with all this experience, the first week is chaotic.”

In that first frenzied week following a large-scale disaster, assessing the most urgent needs and then coordinating a response that avoids duplication of efforts is the priority. Ideally, local government should be leading that coordination, but once it formally requests international assistance, as Nepal’s government did on Sunday, managing the influx of aid agencies and monitoring who is doing what and where becomes a gargantuan task.

On Tuesday, the Nepalese government reportedly told aid agencies to stop sending search-and-rescue teams noting that its military could cope. The priority now, Dangal told IRIN, was removal of rubble and dead bodies, as well as tarpaulin, blankets, mattresses, and sanitation for those sleeping outdoors.

Workers load Red Cross relief supplies arriving at Tribhuvan International Airport in Kathmandu as part of the response to the 7.8-magnitude earthquake that hit on 25 April 2015. 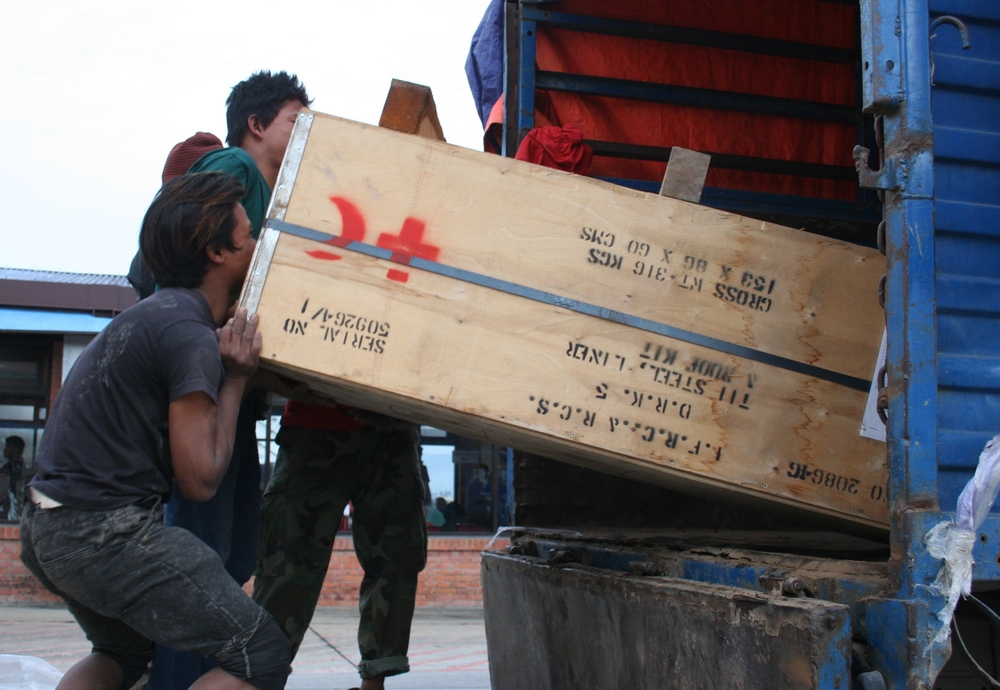 “When so much of the response is relying on national assets like the army and hospitals, really the government’s got to be running that,” said Paul Knox-Clarke, head of research and communications at ALNAP, a think-tank which focuses on the performance of humanitarian agencies. “And yet the IASC system (the Inter-Agency Standing Committee, the main mechanism for coordinating UN-led international humanitarian assistance) was really designed as if the government wasn’t there.”

In 2005, the UN established a cluster system to ensure that agencies with particular areas of expertise such as health, shelter and WASH (water and sanitation) coordinate their efforts in the wake of an emergency. While it does not always mesh well with existing government structures and requires numerous meetings at a critical time, it is generally considered “the least worst solution”, Knox-Clarke said.

“It’s a pain to go to all these meetings, but having them is better than not having them. Generally, it helps identify and decrease overlaps and to prevent gaps in programming,” he said, adding that “perfect coordination” would be virtually impossible in the messy aftermath of the earthquake in Nepal.

One of the lessons to emerge from the Haiti response was the importance of coordination beginning early on, when needs are being assessed. In Haiti, “most individual agencies conducted their own needs assessments, but each followed different standards, methodologies and focus thus limiting the usefulness of the results,” the DFID evaluation noted.

Largely missing from those assessments was vital input from the Haitian government and civil society organisations on the social and economic context in Haiti. These days, said Knox-Clarke, there is more recognition of the need to include local NGOs, but a long way to go in terms of knowing how to do so.

“Really, these relations with national NGOs need to have been built over a long period [beforehand],” he said. “It’s very difficult to get them into the game otherwise.”

Samaritan’s Purse is relying on its long-established relationships with local partners and churches in Nepal to quickly assess needs and establish supply routes for relief items. “Those local relationships are absolutely essential,” said Blackham. “Without those we’d be struggling to get stuff through customs, to work out where to go and to organise logistics.”

ShelterBox, which provides emergency shelter to families made homeless by disasters, relies on local Rotary International clubs to support its teams of staff and volunteers; while WaterAid, a developmental agency, decided to respond to the earthquake because it already had long-running projects in seven of the 11 worst-hit districts and a specialisation in providing clean drinking water, sanitation and hygiene – three of the most pressing priorities in the aftermath of an earthquake.

“When disasters like this happen in areas where we’ve been working, we can’t just stand by and say we don’t do it,” said Palakudiyil.

Hard to pass on funding

Channelling funding through a coordinating mechanism like the UN’s coordinated appeals process, Canada’s Humanitarian Coalition or the UK’s Disasters Emergency Committee, which has just launched a joint appeal of behalf of 13 British charities, can also help support coordinated action on the ground.

But all sorts of organisations from the World Jewish Relief to the Ummah Welfare Trust have launched their own appeals for earthquake relief funding.

"In these rapid-onset, newsworthy natural disasters, that's where you get funding...It does lead to lots of organisations becoming involved"

“It’s very hard to say, ‘No we’re going to pass on this one’ when something is very visible,” said Knox-Clarke. “In these rapid-onset, newsworthy natural disasters, that’s where you get the funding… It does lead to lots of organisations becoming involved. Then you look at some chronic emergencies like long-running refugee scenarios, and you’ve got hardly anyone there.”

How many aid agencies is too many?

“You can have too few [aid agencies], but definitely you can have too many where people are tripping over each other,” he added. “It’s up to the government to regulate that,” by determining priorities and, accordingly, the need for the specific services of aid agencies. But several agencies have already questioned the Nepalese government’s capacity to do so.

“Where leadership by local government is lacking, the international aid community has to take over,” said Palakudiyil of WaterAid. “In Nepal, the ministry of water and sanitation is there, but the response in Bangladesh or India would be more organised because they’ve had to respond to so many more disasters.”